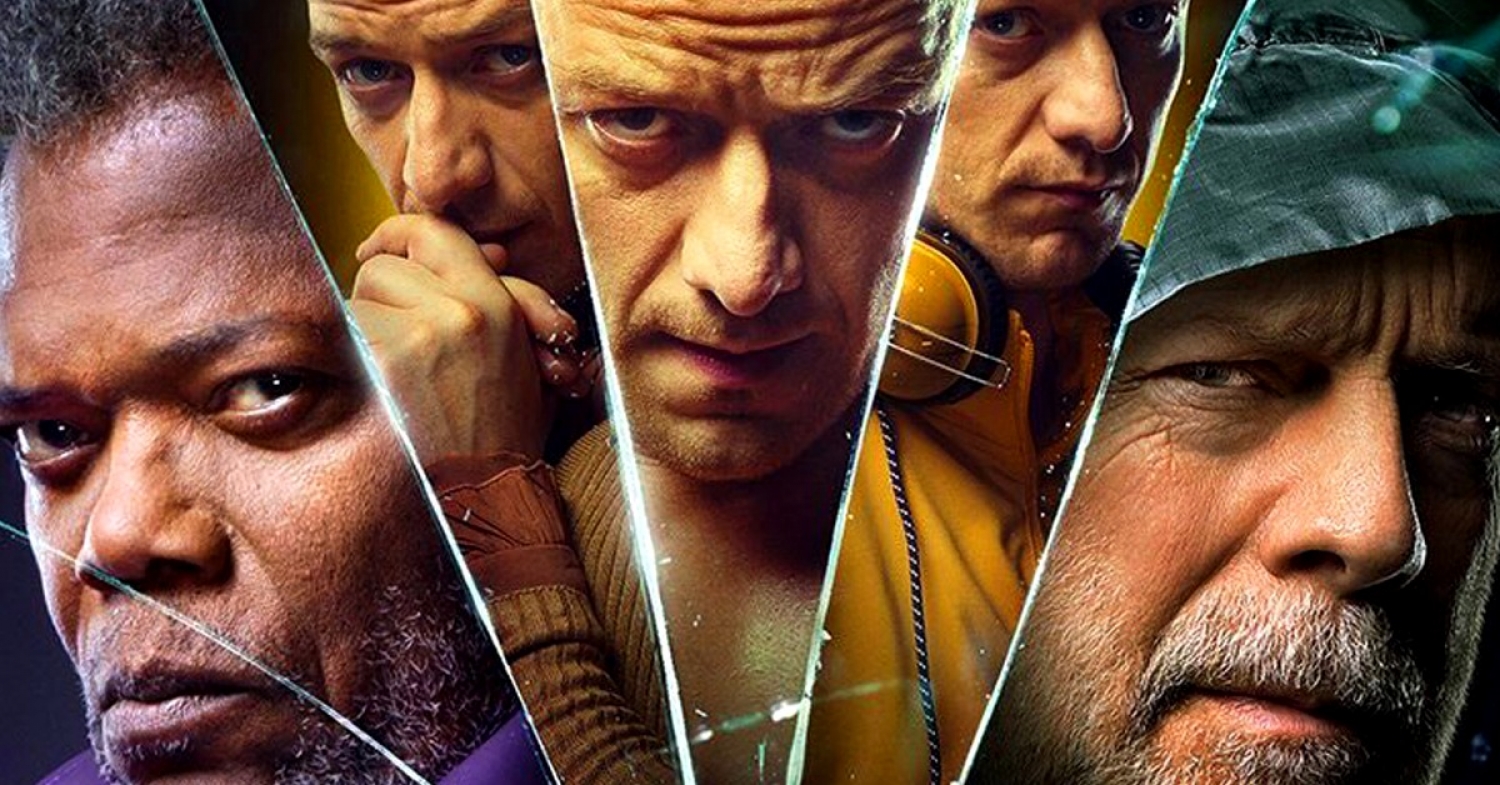 Glass (2019) is part three in a film trilogy by writer/director M. Night Shyamalan. This is the trilogy few expected to happen. Shyamalan gained notoriety as a filmmaker with The Sixth Sense (1999) and its clever twist ending and followed up his success with Unbreakable (2000) the first film in this trilogy. The trick with The Sixth Sense (1999) was that the audience didn’t know it was watching a ghost story until the end. In the same way audiences didn’t know Unbreakable was a superhero film until deep into the movie when the twist was revealed.

In Unbreakable Bruce Willis played campus security guard David Dunn the sole survivor of a train accident who becomes convinced he is a superhero. The man doing much of the convincing is Mr. Glass (Samuel L. Jackson) a reclusive eccentric with a bone disorder—type I osteogenesis imperfect. With an underrated and hauntingly beautiful orchestral score the film is near perfection: on one hand is a man who is unbreakable and on the other is a man whose bones break with the slightest bump. Unbreakable is a slow burn taking its time to unfold allowing its audience to arrive at the same realizations with its protagonist following David Dunn’s emotional journey from the mundane into the heroic. As an origin story it promised more installments, but years passed. Shyamalan continued making films: Signs (2002), The Village (2004), Lady in the Water (2006), The Happening (2008), The Last Airbender (2010), After Earth (2013), The Visit (2015). Audiences sometimes liked his twist endings and sometimes they didn’t; it seemed like there was never going to be another Unbreakable film.

Then came Split (2016). The trailers made it look like it would be a feature length episode of Criminal Minds (TV Series 2005–) focused on a cannibalistic serial killer, Kevin Wendell Crumb (James McAvoy) with a multiple personality disorder who kidnapped three teenage girls. The final scene of Split is set in a greasy-spoon diner. As a news report recaps the events of the film in the background, David Dunn is revealed listening to the news, drinking his coffee and eating breakfast. Unexpectedly, Split became the second film in the Unbreakable trilogy.

Glass is primarily set in the fictional Philadelphia Raven Hill Memorial Psychiatric Hospital where Mr. Glass, the fragile criminal mastermind, was institutionalized at the end of Unbreakable. Joining Mr. Glass under the temporary custody of psychiatrist Dr. Ellie Staple (Sarah Paulson) are David Dunn, nicknamed “the Overseer,” on account of his years of vigilante work in Philadelphia, and Kevin Wendell Crumb nicknamed “The Hoard,” because of his twenty-four personalities, one of which is called “the Beast” an animalistic and demonic force with super-human strength. Both men ended up in custody following their arrest during a confrontation in a local warehouse district as Dunn attempted to rescue a new set of teenage girls abducted by Crumb.

Dr. Staple spends most of the film attempting to convince the three men that they do not have special powers but suffer from a dissociative identity disorder with grandiose narcissistic ideations. Meanwhile, Mr. Glass covertly orchestrates their escape so he can reveal “the Overseer,” and “The Hoard,” and their special abilities to the world.

In her work with the men Dr. Staple suggests David Dunn only believes he’s physically unbreakable because when he almost drowned as a child, he wanted to be invincible; and that Kevin Wendell Crumb’s personality split was a coping mechanism to deal with the physical abuse he received from his mother. Dr. Staple suggests that Crumb even initially imagined himself to be a wild beast to get through the physical pain of his beatings. Lastly, Mr. Glass, who the doctor believes has been kept in a heavily sedated state, is scheduled for a kind of precise specialized lobotomization to cure him of his delusions and give him a psychologically normal life. If successful, the same procedure could be used on Dunn and Crumb and on others who share this belief that they are superheroes with special powers.

Dr. Staple has these three men in her custody for three days—not two days or four days or for a week, a month or even indefinitely. No, she has them for three days before Dunn and Crumb are to be handed back to authorities to face charges related to their arrests. Christian viewers will want to pay attention to the number three because it suggests the Holy Trinity: Father, Son and Holy Spirit. It also recalls the three days of Good Friday, Holy Saturday and Easter Morning.

Here is the big spoiler: Dr. Staple works with a secretive paramilitary group called the “Clover Organization” whose members sport a three-leaf clover tattoo on their wrist. Of course Christianity is not the only religious system to use the number three in its beliefs Hinduism also makes frequent and often ominous use of the number three.  However for good or for ill the three-leaf shamrock has long been used in Christian art to point to the Trinity. But the number three is not the only number associated with this secretive group and their activities. At one point late in the film Dr. Staple says that the organization has existed for 10,000 years and has always been about stopping individuals who believe they have special powers. This is a significant detail. Like the number three, 10,000 years is a specific number.

In the 17th century Episcopal priests John Lightfoot and James Ussher made calculations for the exact date of the creation of the universe based on the Bible’s genealogies. As a result, the number 10,000 became associated with the beginning of time. Director Shyamalan uses this as a kind of shorthand inferring that from the time of Adam and Eve in the Garden of Eden until now this secret organization has suppressed human potential. While Dr. Staple and the “Clover Organization” don’t wear crosses, talk about Jesus, or even quote Scripture, these details imply that Shyamalan is casting them as Judeo-Christian in nature and suggests a rather negative view of the Judeo-Christian ethos through history as a faith that limits humanity. Dr. Staple and the “Clover Organization” don’t care if the special powers they oppose on principle lead people to be villains or superheroes, they simply want to suppress any belief that a person could be above average or super in any way even if they truly possess super powers. They are equal opportunity oppressors. To complete this new dichotomy Shyamalan presents the idea that there are all sorts of people like Dunn, Crumb, and Glass who only need to be awakened to their special powers and the “Clover Organization” alone must keep them from that awakening for the common good of all people.

If the puzzle pieces haven’t completely come together yet they add up to a perennial ancient and heretical theological view called Gnosticism in which the serpent in the garden is often depicted as an agent of light full of wisdom, and the creator of the world is a vengeful petty and evil ‘god’ who desires to subjugate and limit humanity trapping them in a mundane experience. Revealing the “Clover Organization” in the last act of Glass Shyamalan lays all his cards on the table exposing the underpinning themes of the whole Unbreakable trilogy. Essentially both the villains and the superheroes fit into the Gnostic ideal of individuals meeting and growing into their potential and in both cases, it involves initiation and guidance for them to do so. The idea that from the beginning of time they have been actively stifled is also a Gnostic idea. So when the film asks “Who knows how many heroes and villains with special abilities exist in the world … maybe everyone could be enlightened and tap into ‘who they really are’ if they weren’t being suppressed and stunted, if they weren’t being kept in the dark about themselves?” This is a Gnostic question.

Shyamalan was raised Hindu and in his youth attended both a private Roman Catholic grammar school Waldron Mercy Academy, and a private Episcopal high school Episcopal Academy. As a result he would be familiar with the Christian faith. While production companies Universal Pictures, Blinding Edge Pictures, Blumhouse Productions, Buena Vista International and Perfect World Pictures were involved in making the film, writer/director Shyamalan funded it himself meaning he could include ideas or elements without financial influence or concerns. What audiences see on the screen is exactly what Shyamalan wants them to see. So what will audiences see if they are looking? They will see elements of Hinduism and Gnosticism that have overlapping correlations like a Venn diagram which may account for a Gnostic reading of the films. (It would be interesting to see what Hindu audiences think about them.)

When Unbreakable hit theatres in 2000 the modern superhero genre was in its infancy. At this point enough superhero films have come out that the superheroes of MARVEL and DC comics and various origin stories for superheroes are now almost ubiquitous. Even those with no interest in the genre know something about it beyond the staples of Wonder Woman, Batman and Superman. And while not all superhero films delve into Gnosticism, Glass (and in retrospect the whole Unbreakable trilogy) does. As a result, Christian viewers will want to remember that the Christian faith is not a faith obsessed with meeting untapped potential in some special way to find true purpose and identity via personal transcendence. The Christian’s identity is rooted in the life, death and resurrection of Jesus provided for the individual as a divine gift in their baptism into Jesus. Faith apprehends the gifts of forgiveness Jesus has for the individual; belief in oneself does not cause it to spring forth. The Christian faith, while a faith of love and care for the neighbour, doesn’t require super heroic works. The mundane daily tasks of caring for those in need, whether great or small, are heroic enough and God-pleasing. While superhero films and comics can be exhilarating escapist fun, Christian viewers need to avoid the temptation to downplay the importance of the everyday tasks of love and kindness done in their work, community, church, and home.

Glass will undoubtedly be well received by those anticipating it, although they may not like the conclusion of David Dunn’s story. It will also be of interest to those tired of the MARVEL and DC comic book films and looking for something different in the superhero genre. While the film underutilizes Bruce Willis and Samuel L. Jackson, Glass includes some great performances. Of note is McAvoy’s return to the character of Kevin Wendell Crumb. But maybe more satisfying is the work of the now adult Spencer Treat Clark who reprises his role of Joseph Dunn the son of David.

As a film Glass is well made, well acted, and a clever piece of entertainment with satisfying twists and turns. Christian viewers should be careful not to let it influence their views on daily life and what makes for a satisfying existence. In a world that says a person can be whatever they want to be and that if they can’t “do it” or “be it” they are being oppressed or repressed, it’s important to remember that believing something doesn’t make it so and disbelieving in something doesn’t make it so either. For the Christian the measure of truth is not found in the self or self-actualization it is found in the Word of God.