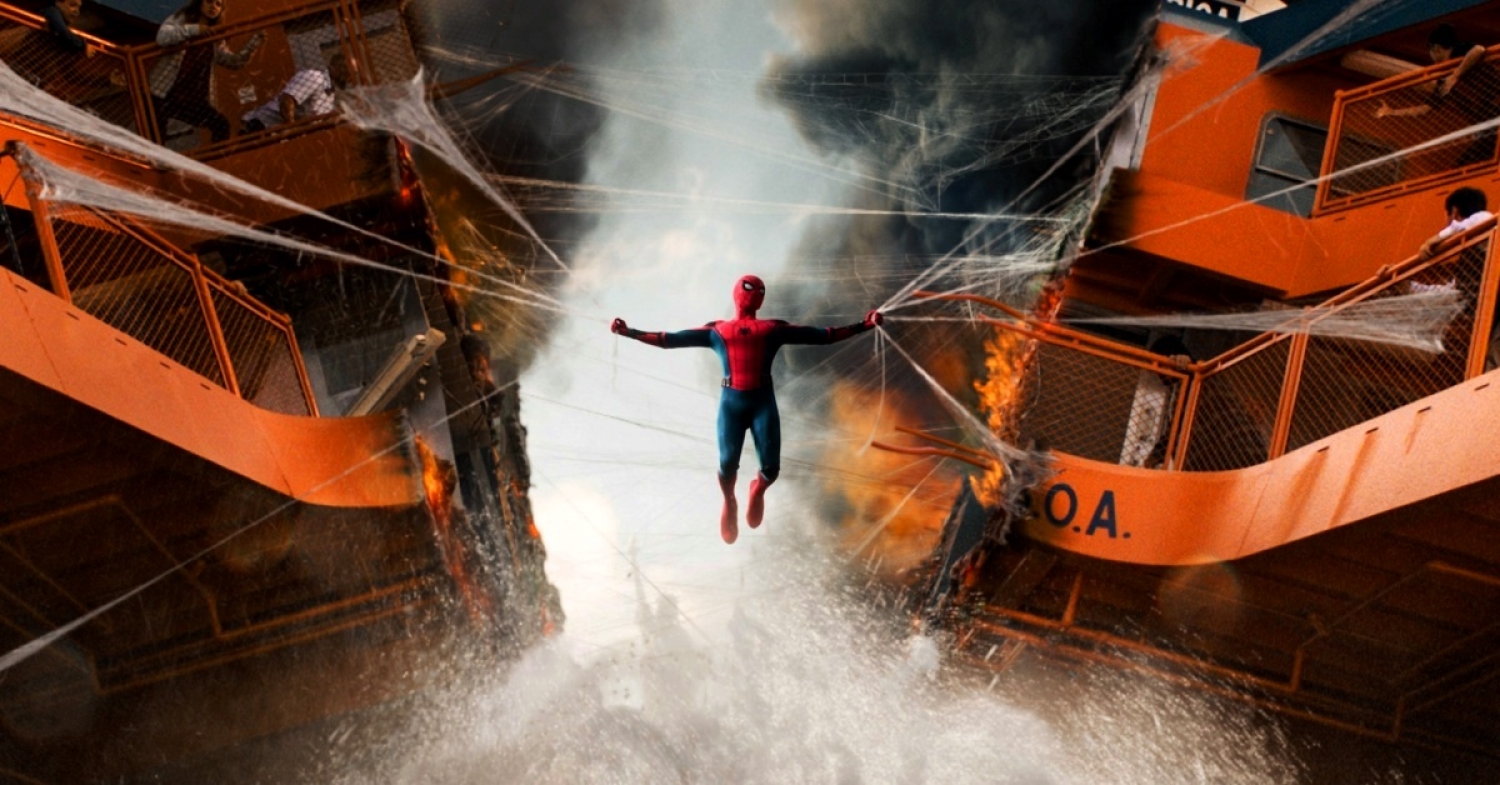 Back home with well-spun story

In Spider-Man: Homecoming (2017) a fledgling neighbourhood superhero from the New York City borough of Queens, who has been noticed and aided by Tony Stark/Iron Man (Robert Downey Jr.), stumbles upon a criminal operation that thieves salvaged alien technology and manufactures and sell weapons made from the stolen goods. The friendly neighbourhood hero is Peter Parker (Tom Holland), an orphaned high school student living with his aunt May (Marisa Tomei). While his superhero antics are anything but normal the rest of his life is very normal: He’s a teenage kid, he makes mistakes, he’s awkward, for all his school smarts he’s a bit naïve. As a teenager Parker has a close dependable friend, Ned (Jacob Batalon), a girl crush, Liz (Laura Harrier) who doesn’t seem to notice him, and another girl, Michelle (Zendaya), who has a crush on him that he can’t seem to notice.

The film ties neatly back into MARVEL’s The Avengers (2012) and Captain America: Civil War (2016) with nods to a bunch of other MARVEL films. In the past, because of licensing agreements, Spider-Man films couldn’t weave a web that so intricately connects the stories and characters found in the growing catalogue of MARVEL Studios films. This time, from the get-go viewers are assured this film is both reminiscent of the Spider-Man they grew up loving and at the same time solidly part of the ever-expanding MARVEL film franchise.

The first promising signs of this new approach come in the opening minutes when viewers receive their first major tie into the MCU (MARVEL Cinematic Universe) with the introduction of the film’s villain Adrian Toomes/Vulture (Michael Keaton). He is a disgruntled salvage operator whose NYC contract to clean up after the alien wreckage following the events of The Avengers (2012) are revoked by a bureaucrat from the U.S. Department of Damage Control (Tyne Daly).

The second, and even more important sign, comes after the film’s introductory scenes when an updated orchestral rendition of the Paul Francis Webster/Bob Harris snappy 1967 cartoon theme song bursts onto the screen over the new MARVEL Studio intro. In other Spider-Man films this beloved cartoon theme song was relegated to a Stan Lee-style cameo and was never front and centre. This prominent use of the musical cue by director Jon Watts is like a promise to the viewer … ‘this time we’re getting it right.’ These scenes, along with Peter’s fun video-diary-behind-the-scenes footage detailing his involvement in the events of Captain America: Civil War (2016), do an excellent job of setting the stage for what follows in Spider-Man: Homecoming.

Before Iron Man (2008) MARVEL had primarily been involved in licensing its comic book characters to film studios like Sony Pictures who produced director Sam Raimi’s Spider-Man (2002), Spider-Man 2 (2004), Spider-Man 3 (2007) with Tobey Maguire as Spider-Man, and Marc Webb’s rebooted The Amazing Spider-Man (2012) and The Amazing Spider-Man 2 (2014) with Andrew Garfield in the lead role. 2017’s Spider-Man: Homecoming is yet another reboot but there is quite a lot more at stake this time. And in a cheeky sort of way MARVEL has said as much even in the film’s name ‘Homecoming’ which carries a double meaning. Yes, the film includes a high school homecoming dance, however, more important to fans of MARVEL and after years of being licensed to Sony Pictures, this new film marks Spider-Man’s official homecoming back into the fold of the MCU. Is Sony still involved? Yes, Sony Pictures provided financing and will take the box office returns while MARVEL gets merchandising revenue and, more important, full creative control.

Spider-Man’s homecoming to MARVEL means this character no longer exists in a sort of fictional parallel universe running along-side the MCU. With Captain America: Civil War (2016) and Spider-Man: Homecoming (2017) and the upcoming Avengers: Infinity War (2018) and its untitled 2019 sequel and the untitled Spider-Man: Homecoming sequel (2019), Spider-Man is now on track to being fully integrated back into the ever-expanding MARVEL story.

For Christian viewers, there are a couple things to note in the film. First, there is a scene where Spider-Man, against all odds, attempts to save the lives of passengers on a Staten Island Ferry which has been shorn in half by a powerful laser beam. With webs slung at the two halves of the sinking ship, his arms stretched out and his feet together, Spider-Man strikes the familiar superhero/hero pose resembling Christ crucified on the cross. This trope crops up over and over in all kinds of film and TV projects. In The Avengers (2012) for instance, Tony Stark/Iron Man struck the pose after he saved NYC from a nuclear missile. Yet Tony Stark with his womanizing, drinking, and general puffed-up arrogance is not very Christ-like and isn’t even half as virtuous as Peter Parker. At one point in Spider-Man: Homecoming, Stark says to Parker, “just don't do anything I would do... and definitely don't do anything I wouldn't do. There's a little gray area in there and that's where you operate.” Later, when Parker gets in over his head and requires a rescue from Stark/Iron Man, he says to Stark “I was just trying to be like you,” to which Stark replies, "I need you to be better.”

Second, the core of Parker’s journey is internal. This Peter Parker story is about asking a smart teenage question, ‘Who am I?” Is he Spider-Man because of the suit he wears and the webs he slings, or is he Spider-Man by virtue of something else? In the end Spider-Man can’t be about the fancy suit with all its bells and whistles and gadgets. Being Spider-Man can’t even be about fame and notoriety. Christian viewers will appreciate that Parker’s virtues are actually meekness and humility—virtues Christ Jesus desires Christians learn from Him. “Learn from Me,” He says, “for I am gentle and lowly in heart, and you will find rest for your souls” (Matthew 11: 29). In general, the teenage life is one where “rest for the soul” seems elusive and this film gets this angst in a way other Spider-Man films didn’t always fully grasp. The fact that the film understands and captures this might make the character of Peter Parker in Spider-Man: Homecoming the best teenaged role model in recent years. As the film moves along Parker again and again resists the world’s temptations and is shown not seeking “rest for his soul” in the typical pitfalls of teenage life. He also shuns the temptations lying at the heart of public heroism. More and more as the film unfolds Parker eschews fame and fortune—even on-line-notoriety—and eventually is shown to be content living a life focused on serving and helping his neighbour, doing what’s right and good, putting himself and his desires second. A “friendly, neighbourhood Spider-Man.”

Spider-Man: Homecoming manages to present a squeaky clean Parker/Spider-Man who is genuinely likable and not an insufferable "do-gooder." However, the film is not as squeaky clean as its lead character and therefore won’t be appropriate for the littlest MARVEL fans (parents planning on taking their children will want to double check the contents of the film). For those who were worried it was too soon for another Spider-Man film, don’t worry this is a well-executed film that only adds to all things Spider-Man and in no way tarnishes what came before it. It outshines the past entries, with few exceptions, but does so graciously and with humility. It is a fun and entertaining film well worth a watch for Spider-Man fans.