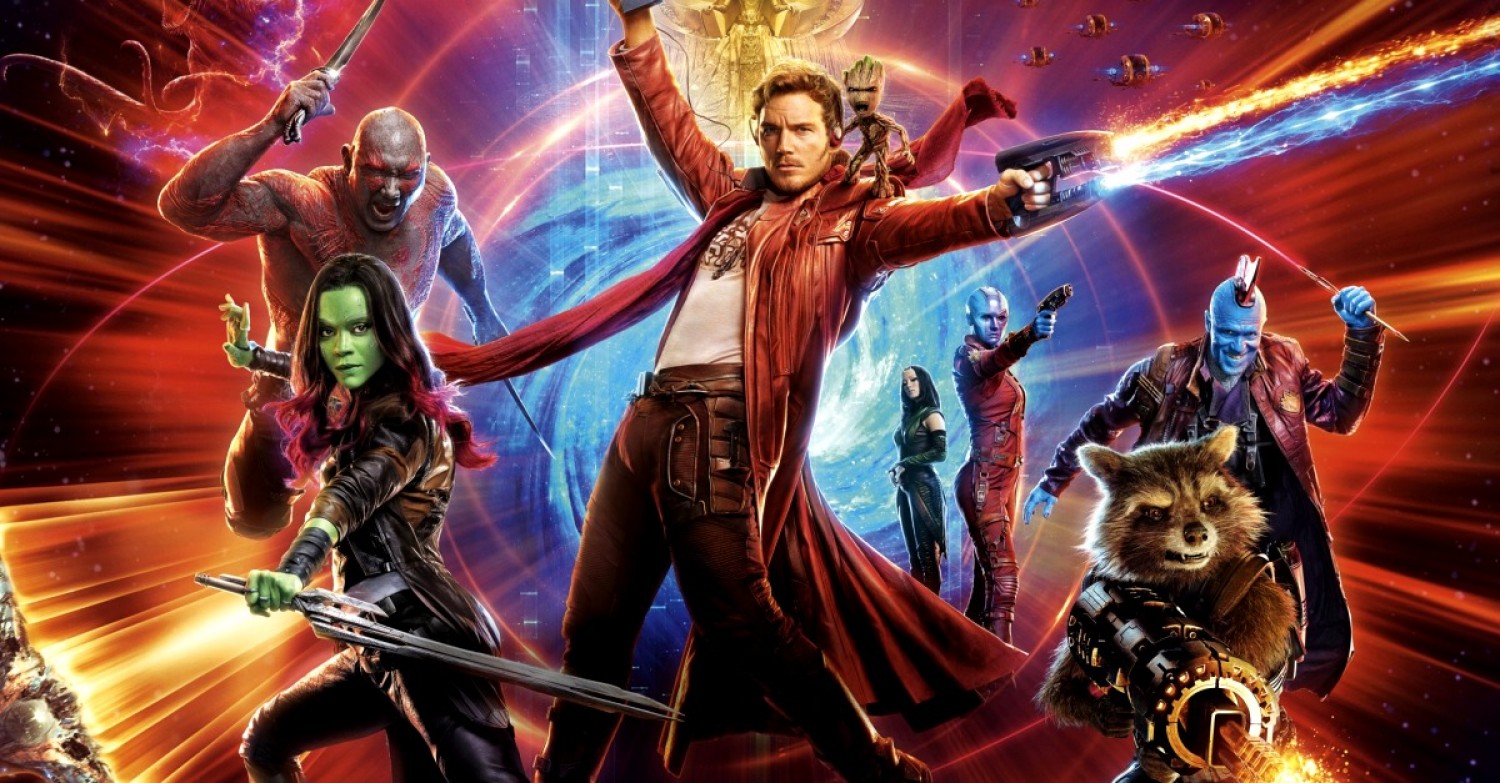 Here's an IssuesEtc Extra about the "god talk" in Guardians of the Galaxy Vol.2

The thrills and spills of being family

Major spoilers ahead. Additional spoilers in the audio interviews for this review.

Guardians of the Galaxy Vol. 2 is the continuing story of Peter Quill/Star Lord (Chris Pratt) and his band of intergalactic misfit anti-heroes. In this installment of the MARVEL franchise Quill finally meets his biological father who his mother insisted was “an angel composed out of pure light.” This extraterrestrial being named Ego (Kurt Russell) turns out to be something called a “Celestial” and lives up to his name. The character Quill interacts with is only a manifestation of the real Celestial entity named “Ego the Living Planet.” Yes, that’s right, Quill’s father is a planet. Comic book nerds will know this before sitting down in the theatre but for the casual filmgoer this is an odd concept.

The action gets rolling when Rocket Raccoon (Bradley Cooper), in a self-loathing self-sabotaging move, steals the very thing the Guardians of the Galaxy were hired to protect. The powerful batteries Rocket steals belong to an extremely sensitive gold-skinned alien species “The Sovereign.” Their leader, the high priestess Ayesha (Elizabeth Debicki), who views insults as blasphemy, vows to avenge the theft. The easily-offended aliens hunt down the Guardians and employ the services of Yondu (Michael Rooker) and his space pirate Ravagers to find them. Viewers were introduced to Yondu and his men in the first film. They were the ones who abducted Quill from earth following his mother’s death then raised him as a thief because he was a skinny kid who could squeeze into places adults couldn't.

Thrown into the film’s mix is another returning character, Nebula (Karen Gillan), the vengeful, spiteful adoptive sister of Gamora (Zoe Saldana). Adopted by Thanos, Nebula wants revenge for Gamora’s part in their horrible childhood at the hands of their villainous father. Nebula begins the film hating her sister blaming her for her continued physical and emotional pain and suffering.

In the end, much of the film is driven by, and revolves around, questions of family. Who is family? Who is not family? What makes a family? Is a true family forged by blood relationships or can people make a family with words and feelings? Why are these questions at the heart of the film? Most of the film’s adult characters are dealing with imperfect, dysfunctional, and even abusive childhoods which included traumatic events like kidnapping, human trafficking, slavery, and medical experimentation. As a result, they all long for a real family, a good family, or in the case of Drax the Destroyer (Dave Bautista) the family taken away by death. For the rest, their blood relatives are out there somewhere but either they never knew them or can’t find them. At the end of the first film it seemed like Quill, Gamora, Rocket, Groot (Vin Diesel), and Drax had found family with each other, but in this film the whole “We are Groot”/family thing becomes more complicated than they’d first thought especially when Ego comes into play.

What about the movie itself? How does it measure up to the 2014 first installment? On one hand the Volume 2 is crasser than the first film which was already a bit crass. This will make it inappropriate for younger viewers. On the other hand, the immaturity of much of the humour will likely make it popular with young boys. Be prepared for literal poop jokes. From robot hookers to 1980s-style PG language— remember the film is rated PG-13—to Drax’s literal and comically awkward descriptions of sex and bodily functions, Guardians of the Galaxy Vol. 2 isn’t shooting for the squeaky-clean end of the superhero genre continuum. That said, the film is no Deadpool (2016) or Logan (2017)! Like the first film these characters are on a sliding scale of virtue and their redeeming quality is that when push comes to shove they rise to the occasion and grasp hold of virtue even if it’s a fleeting grip.

This leads to another aspect of the film: Since many people didn’t know what to expect with Guardians of the Galaxy Vol. 1 and because it was so well done, viewers were pleasantly surprised with the space-opera-rollercoaster-ride humour and adventure. A second rollercoaster ride is invariably never quite as much fun as the first and while Guardians of the Galaxy Vol. 2 has a bunch of fun moments and enjoyable set pieces, it suffers from this phenomenon. Few sequels live up to the first outing and even fewer sequels supersede their predecessor.

Something else to remember is that this is a comic book film. In fact, it may be one of the more faithful MARVEL comic book films in terms of embracing the serial nature of the printed medium. Comic book fans understand the experience of picking up a new issue, speeding through it enjoying every panel and splash, quickly reading the speech bubbles and onomatopoeic BUZZ, BOOM and POWS only to say, “that’s it?” as they read “to be continued …” in the story’s last panel. Even the end credit scenes in MARVEL films are like the teasers for next month’s comic book issue except of course film takes more than a month to produce the next volume. That’s the nature of a serialized comic book story which writer/director James Gunn fully embraces. As with serialized comics, there is a reward for film viewers with a really good memory or viewers who re-watched the first film before seeing Guardians of the Galaxy Vol. 2. The new film builds on details from the first film, minor characters become major characters, and all the little seemingly throw-away details about the Titan-like Celestials sprinkled into the first film help viewers appreciate what’s going on in this film.

In Guardians of the Galaxy Vol. 1 Quill and his newly-forming Guardians ventured to a planetoid called Knowhere—the gigantic dismembered head of an ancient Celestial which was being mined for its “natural resources.” The place was teeming with millions of space travellers and miners trying to make a buck from what remained of the nameless ancient colossal being.  In Guardians of the Galaxy Vol. 2 while the idea of a planet-sized Celestial being (complete with a man-in-the-moon-face) is odd, it isn’t too far off from what viewers were previously introduced to.

Christian viewers should note some of the themes and concepts put forward related to Quill’s father “Ego the Living Planet.” Although Ego believes he’s eternal he says the first thing he remembers is winking into existence as a sentient molecule and then, over millions of years, learning to control the other molecules around him as he grew smarter and stronger slowly building his living planet form and everything on it layer by layer. He is egocentric and masks it with false humility noting that he is a god with a small ‘g.’ Seeking meaning for himself, Ego conceived of a plot to colonize the universe by parasitically spreading his consciousness and physical nature across the galaxy. This is what led Ego to earth and to Quill’s mother Meredith (Laura Haddock) and to fathering Quill with her.

The "deities" in the MARVEL Universe may think themselves gods from time to time and at times may be worshiped as such, yet they know deep down they are not in fact the true God. In Thor: The Dark World (2013) Odin concedes this when his adopted son Loki tries to explain his actions in The Avengers (2012) by saying, “I went down to Midgard to rule the people of Earth as a benevolent god, just like you,” and Odin responds, “We are not gods! We're born, we live, we die, just as humans do.” Loki quips back “Give or take five thousand years.” In the MARVEL universe Ego, the other Celestials, and the Asgardians are limited beings who are part of creation. Their “god-like” appearance is mainly due to their longevity and raw power. Christian viewers who watch Guardians of the Galaxy Vol. 2 with youth in their family will want to take the opportunity to talk about how this differs from what Scripture teaches about the Holy Trinity. The film can also provide a jumping-off point for discussing the true eternal nature of God, what Jesus’ incarnation really means for them as Christians, what being a child of God in their baptism really means, and the nature of their familial relationships with their brothers and sisters in Christ. Quill is the biological son of Ego the Living Plant but his relationship to Ego is not like Jesus’ relationship to God the Father. Christians do not confess that God the Father had a physical sexual relationship with the Virgin Mary to produce Jesus. In the Apostles’ Creed Christians confess that Jesus was conceived by the Holy Spirit and born of the Virgin Mary.

At a critical moment in Guardians of the Galaxy Vol. 2 Ego says to Quill, "Listen to me! You are a god! If you kill me, you'll be just like everybody else!" to which Quill responds, "What's so wrong with that?" Ultimately Ego the Living Plant is as his name might suggest: an egomaniacal, egocentric, self-centred villain who rarely cares for anyone but himself. Quill rejects this potential way of life and must to come to terms with who his ‘dad’ really is. Parents and viewers of any age will, if they care to think about the film a little bit, want to sort out all this god talk; the best way to do this it to apply their confession of faith to the film.

If Bradley Cooper and Vin Diesel as Rocket and Groot were the standout performances from the first film then the standout performance in Guardians of the Galaxy Vol. 2 belongs to Michael Rooker as Yondu. His relationship to Quill and his personal story arc create some of the film’s most satisfying and poignant moments. Without Yondu the film would be a colourful pointless thrill ride.

Guardians of the Galaxy Vol. 2 is perhaps a fitting film for a world where more and more children are born out of wedlock and many are raised in broken homes, in blended-families, in foster care, or by single parents. The film tackles questions of what that brokenness looks like once these children are adults. Without the adorable baby Groot these heavy themes could potentially be overwhelming. As it stands viewers are treated to a balance between the absurd and the sincere.