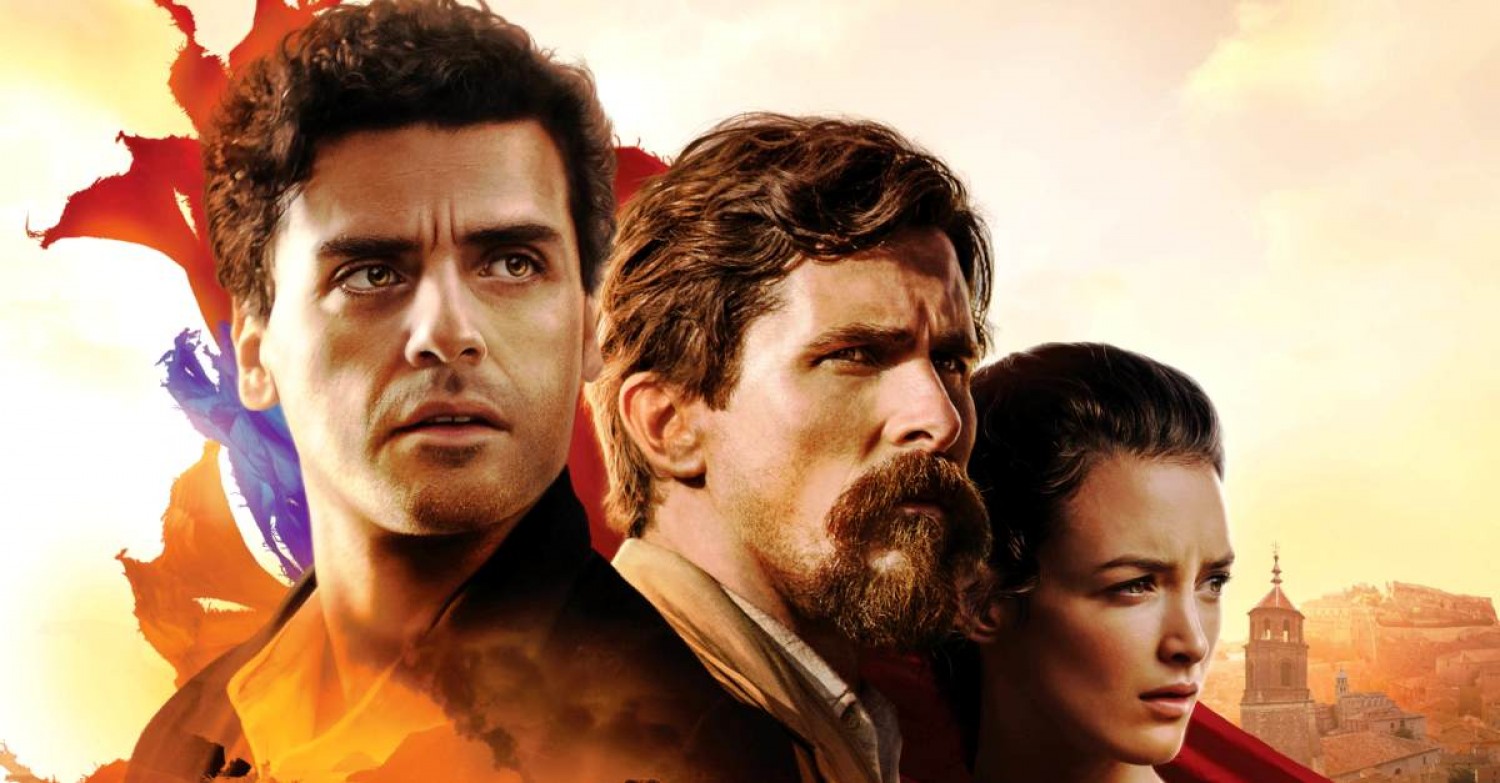 A lesson from the past for the future

The Promise (2016) is a sweeping historical drama set in 1915 at the beginning of the Armenian Genocide[1] at the hands of Turkey’s Ottoman Empire. The current Turkish government and its predecessors publicly deny this holocaust took place. Viewers need to know that even now the Turkish government doesn’t want people to see this film or any film detailing the events surrounding this attempt to wipe out the Armenian Christian[2] population that lived within its borders.

Although set in historical events, The Promise’s central story and its main characters are fictional. The film begins with a promise made by a young man, Mikael (Oscar Isaac), living in the sleepy remote village of Sirun in the southeast part of the Ottoman Empire. He promises to accept a dowry of 400 gold coins from the father of a young woman, Maral (Angela Sarafyan), so he can study medicine in Constantinople and return to marry her. Mikael’s promise is built on the hope of bringing modern medicine to his small town and improve the lives of his fellow Armenians. While he doesn’t love Maral, he believes once married, love will grow.

In Constantinople Mikael meets an Armenian girl, Ana Khesarian (Charlotte Le Bon), the nanny and tutor of Mikael’s relatives with whom he’s boarding during his studies. Eventually he meets Ana’s boyfriend, Chris Myers (Christian Bale), an American Associated Press reporter. Caught between his promise, the engagement to Maral, and his growing love for Ana, Mikael is forced to make difficult choices as Turkey enters World War I in 1915. Emboldened by its association with Germany and the other Central Powers, the Ottoman Empire’s first order of business is removing what it believes are internal threats to its war efforts beginning with the people considered infidels—the Christian Armenians. Racing against the clock to reveal the atrocities of the genocide, Chris Myers risks his life to tell the world the story of the Armenian holocaust as believers are deported, murdered, robbed and led into the Syrian desert for mass execution. Meanwhile, Ana will not abandon her Armenian people. As hostilities mount she becomes embroiled in an effort to smuggle Armenian children out of the country. Throughout the film the paths of Mikael, Ana, and Chris criss-cross repeatedly as their fictional story unfolds amidst the real tragedy befalling the Armenian Christians struggling to survive against all odds.

Christian viewers will notice a couple interesting features in the film. First, it portrays positively the vocation of the Office of the Public Ministry. Clergy, both Armenian and non-Armenian, are shown as caring, involved Christian members of the community. The Armenian priests are shown working out their vocation in prayer, conducting weddings and funerals, leading the liturgical life of the church in worship, and providing comfort. They are not shown inciting violence or trouble but rather caring for those they serve amid violence and trouble. Second, the film has a theologically correct view of revenge/vengeance. Mikael, a medical student, when faced with the option to fight or help the injured, chooses to help the injured honouring his vocational path. The decision bothers him and in a moment of personal conflict he says that he seeks revenge to which the response is given, “Our revenge will be to survive.” This is the Christian approach to vengeance: putting it all in the hands of God and pushing forward, living lives to the glory of God and for the benefit of the neighbour. Much of what St. Paul writes to the Roman Christians (Romans 12:14-21) about vengeance and revenge can be found in The Promise: “Bless those who persecute you; bless and do not curse them. Rejoice with those who rejoice, weep with those who weep. Live in harmony with one another. Do not be haughty, but associate with the lowly. Never be wise in your own sight. Repay no one evil for evil, but give thought to do what is honorable in the sight of all. If possible, so far as it depends on you, live peaceably with all. Beloved, never avenge yourselves, but leave it to the wrath of God, for it is written, “Vengeance is Mine, I will repay, says the Lord.” To the contrary, “if your enemy is hungry, feed him; if he is thirsty, give him something to drink; for by so doing you will heap burning coals on his head.” Do not be overcome by evil, but overcome evil with good.” The film also shows the vocation of the sword defending the weak and abused. Primarily, this is shown in the inclusion of historical figures like the French Admiral Fournet (Jean Reno), and the American Ambassador Henry Morgenthau (James Cromwell).

Following the film’s Toronto Film Festival premier September 11, 2016, Open Road Films obtained distribution rights and set the wide release date for April 2017. A production and distribution company with no fear of taking on tough subject matter, Open Road Films also distributed 2016’s Best Picture Oscar winner Spotlight (2015) about the Roman Catholic clergy sexual abuse cover-up:[3] The Promise however would prove a unique challenge. Movies about the Armenian Genocide face an uphill battle even to be made at all. The 1934 MGM film adaptation of Franz Werfel's novel “The Forty Days of Musa Dagh” which was to star Clark Gable was squelched by the Turkish government of the day.[4] Opposition to telling the Armenian story is still present. In a Varity article, Senior Film and Media Editor Brent Lang reported, “There were no public protests at the Toronto premiere, but there is already evidence of a propaganda campaign to discredit “The Promise.” The film’s IMDb page has received more than 86,000 user votes, the bulk of them one-star ratings, despite the fact that the movie has had only three public screenings. That’s more user reviews than appear for “Finding Dory,” the highest-grossing film of the year. The filmmakers say reaction on social platforms has been equally intense. “The day after we screened the movie, 70,000 people went on IMDb and said they didn’t like the movie,” says Mike Medavoy, one of the film’s producers. “There’s no way that many people saw the movie after one screening. There aren’t that many seats in the theater.”[5]

Viewers may know director Terry George from his 2004 film Hotel Rwanda starting Don Cheadle about the Tutsi Genocide of 1994. With The Promise George has managed to make a restrained and reasonable accounting of the Armenian Genocide avoiding any graphic violence, nudity, or strong language that would keep viewers from recommending the film. Neither are the Turkish people portrayed as uniformly participating in the genocide. Characters like Emre Ogan (Marwan Kenzari), a medical student and son of an official in the Turkish military and a mutual friend of Mikael, Ana, and Chris, is shown as an individual who risks his life to save the lives of his Armenian friends. This is an attempt to make the story accessible to the widest possible audience by including a Muslim character sympathetic to the plight of the Armenian Christians.

With an equally restrained love story that zigs where audiences familiar with Hollywood romances might expect it to zag, The Promise is a film that might just be the thing for those seeking a movie that doesn’t involve flashy sports cars or aliens saving the universe. More than that, this film comes at an important time as Oriental Orthodox Christianity and other native Middle East Christians are living under genocidal conditions. George provides a film that presses its viewers towards a sympathetic investigation of the past and, by extension, may prompt viewers to consider the present situation in which Christians live. Looking ahead, The Promise could act as a catalyst for Christian viewers to contemplate what plans they might want to make should they find themselves in a minority situation with a government that has turned against their Christian faith for doctrinal or ethnic reasons.

[1] Most of the systematic extermination of the 1.5 million Armenian by the Turkish government took place in 1915 but the genocide continued past the conclusion of WWI in 1917 until 1923.

[2] Armenian Apostolic Church is the national church of the Armenian people and is a part of Oriental Orthodoxy (Coptic Orthodox Church of Alexandria, the Ethiopian Orthodox Tewahedo Church, the Eritrean Orthodox Tewahedo Church, the Syriac Orthodox Church, the Armenian Apostolic Church and the Malankara Orthodox Syrian Church) These churches recognize only the first three ecumenical councils – the First Council of Nicaea in 325 A.D., the First Council of Constantinople in 381 A.D., and the Council of Ephesus in 431 A.D.

[5] ‘The Promise:’ The Armenian Genocide Epic Kirk Kerkorian Spent a Fortune to Make.