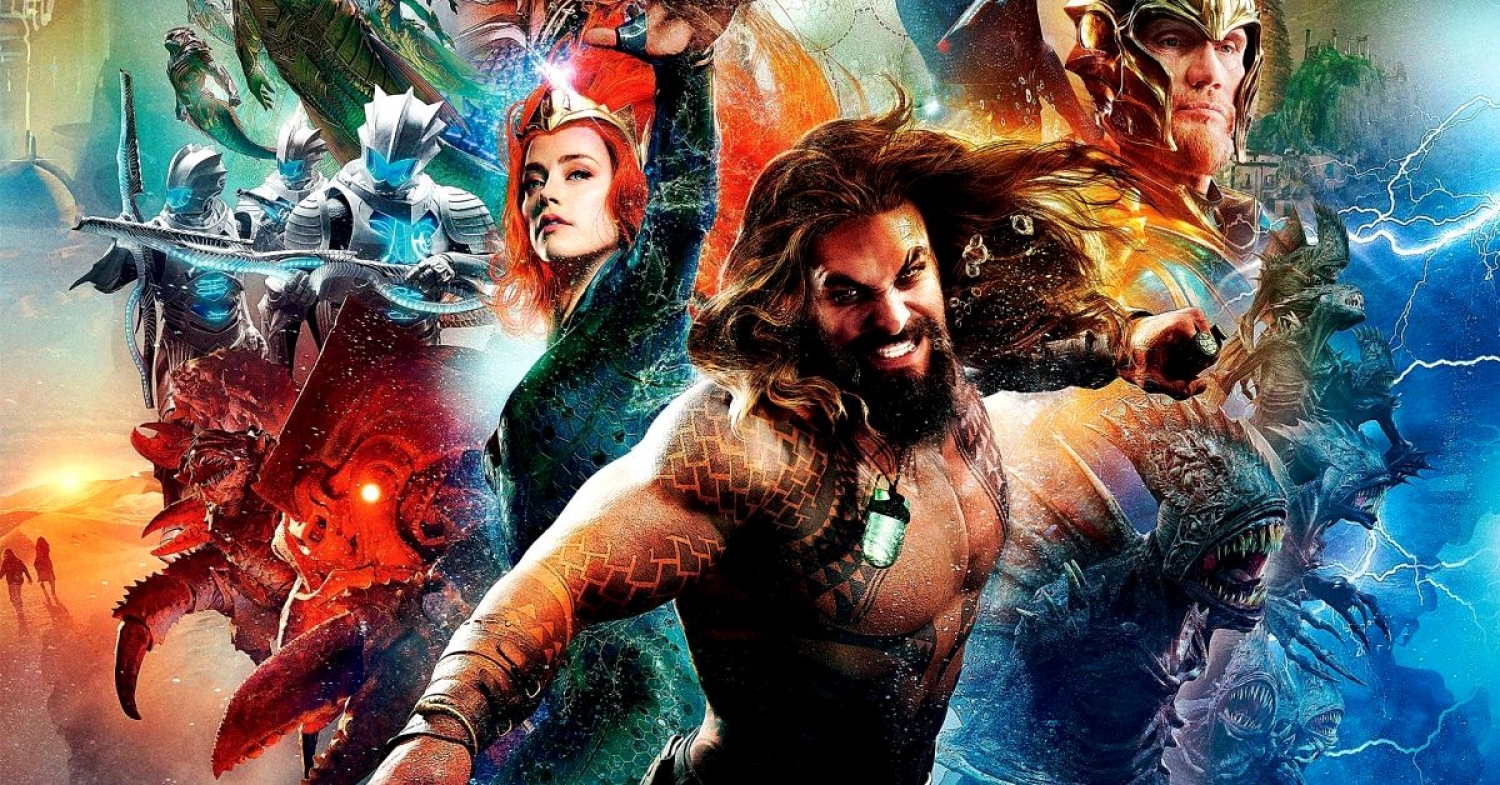 Not So Serious: Aquaman Charts a New Course for DC

Aquaman is the story of Arthur Curry (Jason Momoa) the son of a lighthouse keeper, Tom Curry (Temuera Morrison), and an Atlantean princess, Atlanna (Nicole Kidman), who must come to terms with his royal lineage and, for the good of the whole world, fight to claim his rightful place on the throne of Atlantis. To do so Aquaman, with the help of Atlantean princess and love interest Mera (Amber Heard), must find the ancient and powerful Trident of the greatest king of Atlantis, King Atlan (Graham McTavish), and use it to prove his royal claim and fight his half-brother, King Orm Marius (Patrick Wilson) for the throne.

Secretly trained to harness his super powers for just such a purpose by the Atlantean vizier Vulko (Willem Dafoe), the Aquaman, must also thwart his half-brother’s plan to become Ocean Master and unite the undersea kingdoms in a war against the land dwellers who pollute and harvest the world’s seas.

There’s also a sub plot concerning a family of pirates who become entangled with Aquaman. The pirate captain, David Kane (Yahya Abdul-Mateen II), blames Arthur for his father’s death with the aid of advanced Atlantean technology and becomes the villain Black Manta Aquaman’s nemesis. Arthur’s regret over not saving Kane’s father when given the opportunity contributes to his reluctance to take his rightful place on the throne of Atlantis. This places Arthur Curry into a classic trope of “The one who doesn’t necessarily want the job may in fact be better suited for it than the one who desperately wants it and will do anything to have it.” To further complicate things, his brother Orm desperately wants to keep the throne and increase his dominion believing in his heritage rights over his “half-breed” brother since Orm is a “pure blood” Atlantean and Arthur is not.

Does some of this stuff sound familiar? Bits and pieces of Thor (2011) and Black Panther (2018) maybe? There is likely a good reason. For more than 50 years the rivalry between DC Comics and MARVEL Comics is comparable to Pepsi versus Coca-Cola: both provide similar products yet they need to be just different enough to keep the loyalty of their own audience. This competitive approach has translated into theatres over the last ten years with both companies striving to establish their respective cinematic universes. MARVEL was ahead of the curve with the surprise success of Iron Man (2008) while DC has been playing catch-up finally producing a meta-narrative-driven interconnected universe with the release of Man of Steel (2013).

Generally speaking DC Comics has released more serious and dour fare where MARVEL Comics’ productions are more upbeat and flashy. MARVEL found its footing quickly and produced an enjoyable albeit formulaic approach to their films carefully keeping the tone in check. DC, on the other hand, struggled to find a balance between campy cartoon and serious drama perhaps hampered by the dark tone of Christopher Nolan’s critically acclaimed Batman trilogy Batman Begins (2005), The Dark Knight (2008), and The Dark Knight Rises (2012). MARVEL went light and pop in response to the Noland films resulting in the success of films like The Avengers (2012) and Guardians of the Galaxy (2014). DC attempted to capture some of that magic with Suicide Squad (2016) and Justice League (2017) but these attempts were often criticized as stylistically derivative of MARVEL and out of step with DC’s core identity—a judgement that continues. Both films failed to fully commit to the light and flashy pop formula they were flirting with.

Which brings things back to the character Aquaman who DC introduced to the big screen in Justice League (2017). The muscular and charming Jason Momoa reprises the role in Aquaman (2018) which takes place after the events of Justice League.

While not as dark and gritty as other DC films, Aquaman is still a little too violent for younger children. Director James Wan successfully side steps the dreary dark look of previous DC comic book films like Zack Snyder's Batman v Superman: Dawn of Justice (2016) providing a vibrant and bright colour palette. Wan, better known for directing intricate rollercoaster-style horror films like Saw (2004), Insidious (2010) and Insidious: Chapter 2 (2013) along with The Conjuring (2013), and The Conjuring 2 (2017), has proven he can also do action when he directed the fast car action film Furious 7 (2016) starring Vin Diesel, Paul Walker, and Dwayne Johnson. With Aquaman Wan again works to create that amusement park ride experience. What he accomplishes is admirable in its ambitions but maybe not as polished or smooth as some of his previous films. He seems to be aiming for a sort of live-action 1980s Saturday morning cartoon feel. Everything is over the top and Wan knows it. Nothing is by accident; the film’s goofball tone is completely intentional. As soon as there is an octopus playing the drums viewers know Aquaman is not going to be a dark brooding Batman-style film.

By embracing the silliness of the Aquaman character and world, Wan’s film has more in common with screw-ball film adaptations like Mike Hodges' Flash Gordon (1980) or Gary Goddard's live action He-Man film Masters of the Universe (1987). In fact, Wan even casts Dolph Lundgren, who played He-Man in Masters of the Universe, as King Nereus. What emerges is a film that’s more a collection of scenes strung together like pearls on a necklace, each slightly different, rather than a cohesive whole. Like the weather, if a viewer doesn’t like this particular 10 minutes, wait it out and something different will come along soon. Parts of the film, like the quest for the mythical trident of King Atlan, are shot to look like Raiders of the Lost Ark (1981), Indiana Jones and the Temple of Doom (1984) or National Treasure (2004) or maybe even Pirates of the Caribbean: Dead Men Tell No Tales (2017) while other parts set in the underwater world of Atlantis look a lot like TRON: Legacy (2010) and yet other parts, featuring a Lovecraftian kaiju-style sea monster in a hollow earth ocean, are reminiscent of Pacific Rim (2013). There are also parts, like the scenes featuring Black Manta, which would fit perfectly into the recent Mighty Morphin Power Rangers (2017) film. For some viewers all these nods will feel like a loving Ready Player One (2018)-style homage to more sub- genres then Aquaman could shake a Trident at. For others this will be a baffling nonsensical mess. Nerds and comic book geeks will be rewarded at every turn; others will be struggling to tread water.

Christian viewers may want to contemplate the theme of promise and lineage threading through Aquaman— the idea of a rightful king versus a pretender king or one who holds the throne without full legitimacy. In the Bible there is enmity between Adam and Eve’s sons Cain and Abel causing one brother to murder the other. Later in the Book of Genesis is the account of fraternal twins Jacob and Esau and their birthright/blessing from their father Isaac. Then there is conflict between the sons of Jacob which lead to step-brothers plotting to kill their brother Joseph only to sell him off into slavery in Egypt. Then there is the long narrative of the two anointed kings of Israel King Saul and David. Eventually these accounts lead to the birth of the true King, the King of kings and Lord of lords—Jesus the Christ whom King Herod the Great wanted dead when he heard of Jesus’ birth. Jesus and His family then fled to Egypt to live in secrecy and emerge later. Bits and pieces of these Biblical narratives show up in the relationship between Arthur Curry and his half-brother Orm Marius. And while Orm starts out desiring to murder his brother Arthur like Cain and Abel, in the end their relationship has more in common with Jacob and Esau or Joseph and his step-brothers. Take all these biblical stories of brothers and rival kings and throw them in the blender with the mediaeval King Arthur legends and you get Aquaman. That said, it may be hard to make those comparisons due to the epic amount of bombastic distractions Wan throws at the audience.

Characters like Aquaman or Superman in the DC comics and cinematic universe or like Thor in the MARVEL comics and movies invite comparisons with Jesus. For instance, Arthur Curry is part Atlantean part human which in the film apparently qualifies him to bring both of these worlds together. But this is no actual analogy for the incarnation of Christ Jesus. On the surface this kind of duality seems to point to Jesus but that is not Christians actually confess about the two natures of Christ. Jesus, as is confessed in the Athanasian Creed, is “Perfect God and perfect man, composed of a rational soul and human flesh; [and] Although He is God and man, He is not two, but one Christ: One, however, not by the conversion of the divinity into flesh, but by the assumption of the humanity into God; one altogether, not by confusion of substance, but by unity of person. For as the rational soul and flesh is one man, so God and man is one Christ.” As a result Aquaman, with his super powers and human foibles and sins, is not actually like the Christ of Scripture who at once is both God and man without sin. Aquaman, like many comic book heroes, has his flaws and more closely fits the pattern of the biblical judges like Samson (Judges 13–16).

Like the more focused Wonder Woman (2017), Aquaman is a box office hit for the DC Cinematic Universe. The question is whether it will hold up over time or end up looking and feeling derivative of the many genres it so freely references. Audiences will have to decide whether Aquaman is the hit it appears to be or whether it’s all wet.