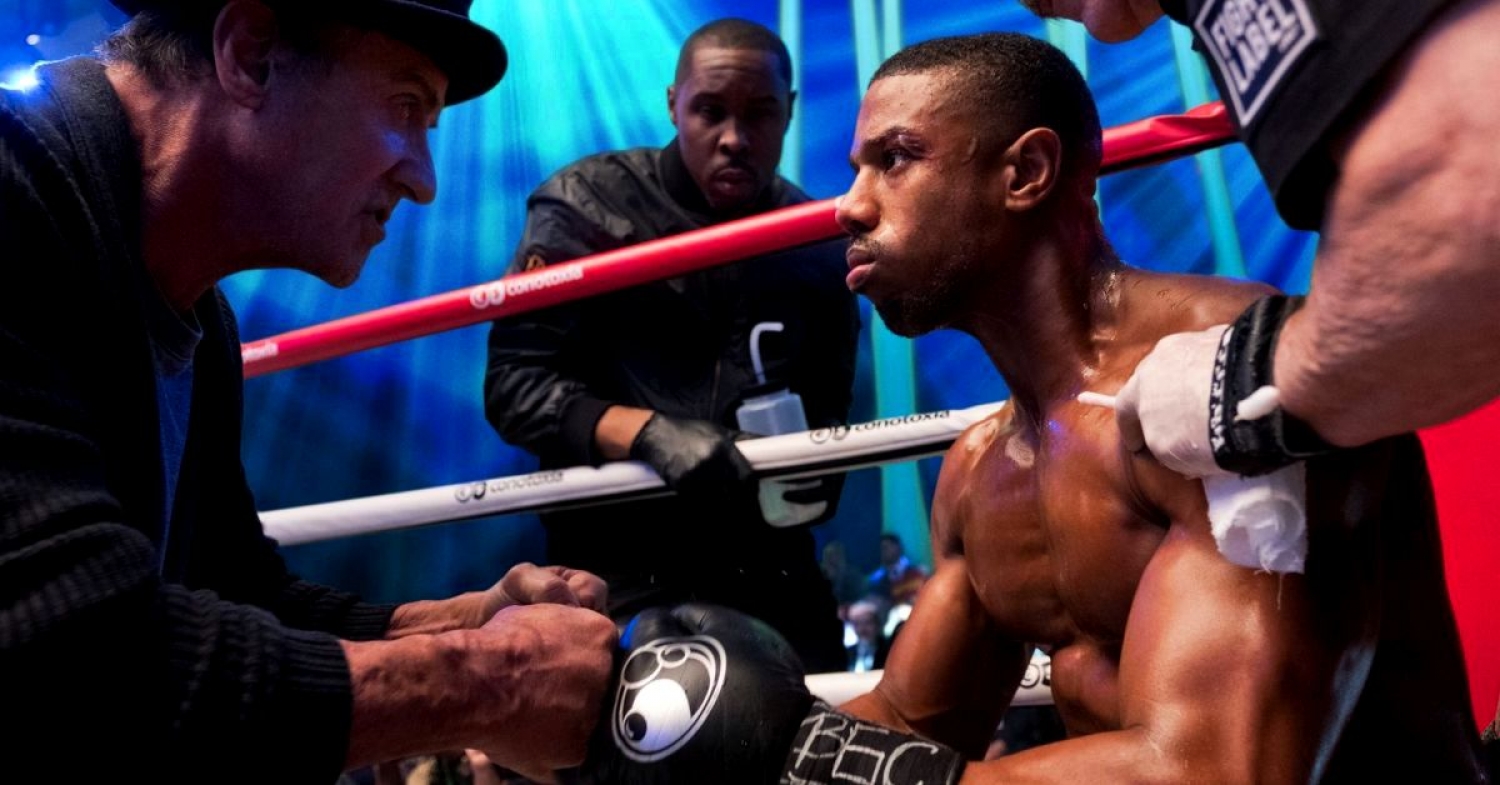 Reaching a goal, like becoming boxing’s World Heavyweight Champion, isn’t always enough. Creed II (2018) continues the story of Adonis Johnson (Michael B. Jordan). He is the son of Apollo Creed (Carl Weathers)—the result of an adulterous relationship—who, with the help of Rocky Balboa (Sylvester Stallone), Apollo’s boxing rival, eventual trainer and friend, gains notoriety in the ring without using his father’s name. He eventually accepts the Creed name and legacy and fights as Adonis Creed. One of the strongest themes of the first Creed (2015) film was the boxer’s internal challenges as he battled with himself. This is further refined in Creed II when ghosts from his father’s past appear to challenge Adonis’ newly-achieved World Heavyweight Champion title. He continues struggling with why he is stepping in the ring: Is he fighting Viktor Drago (Florian Munteanu) to defend the honour of his father who died at the hands of Drago’s father Ivan Drago (Dolph Lundgren) in Rocky IV (1985) or does Adonis have reasons beyond vengeance and maintaining a family legacy?

In a world of reboots and re-envisioning of classic films it’s satisfying sometimes to simply enjoy the continuation of a story. While the central focus has shifted to Apollo Creed’s son, the genius of both Creed by Ryan Coogler and Creed II by Steven Caple Jr. is continuing and expanding the Rocky film franchise not by milking past achievements but rather by elevating a secondary character’s family while still including Rocky Balboa in a supporting role. This allows Rocky to grow old gracefully yet further develop his character without him fighting in the boxing ring. (For viewers who want to see an older Rocky coming out of retirement to get back into the ring, check out Rocky Balboa (2006) the film that bridges Rocky (1976) through to Rocky V (1990) with these current Creed films). In Creed and Creed II Rocky steps into the shoes of his old trainer Mickey Goldmill (Burgess Meredith) and acts as mentor to Adonis. But more than that, Rocky acts as a father. While he has previously played the part of the boxing trainer, because of his age Rocky begins taking on the sage quality of Mickey and, like Mickey, finds a reason to go on in life because of his relationship with Adonis.

While fatherhood was a key theme in Creed (2015), in Creed II it’s the central theme. As in Rocky II (1979) where Rocky dealt with life as a new father and what that meant to his boxing career, in Creed II Adonis and his fiancée Bianca (Tessa Thompson) need to come to terms with an unexpected pregnancy and what that means for them as a couple planning to be married. A child conceived out of wedlock at an unexpected time might raise questions of abortion, but that’s not an option for the couple. In fact, before it is even mentioned Adonis provides the best possible support to his fiancée. When Bianca, a musician who had just signed a recording contract and was looking forward to touring the festival circuit with her music says, “I don’t know if I’m ready … if we’re ready,” Adonis takes her hand and says “Then we’d better get ready.” This touching scene may be one of the best moments in the film.

The film includes many broken depictions of fatherhood yet each father/child relationship has moments of redemption and repentance; Men swallow their pride, throw in the towel, quell their fears, and rise up to be good fathers. Rocky is estranged from his son Robert (Milo Ventimiglia) and hasn’t met his own grandson; Adonis still struggles with his relationship to his father Apollo and needs to tackle fatherhood with a daughter who may have a congenital hearing disability like her mother Bianca; Ivan Drago, who was tossed aside by Russian boxing after his defeat to Rocky in Rocky IV, has a domineering relationship with his son Viktor who he personally trains due to Ivan’s own failures in boxing and marriage even using his son’s mother—ex-wife Ludmilla (Brigitte Nielsen)—as negative motivation to spur on his son in the ring. All these broken and damaged relationships are given fitting resolutions, not necessarily happy endings but at least endings on the road to forgiveness, redemption, and happiness. In this way both Creed and now Creed II stand in stark contrast to the way fatherhood is generally depicted in film, TV, and other media. Even though Creed and Creed II aren’t explicitly Christian these films show flawed characters struggling amidst life’s circumstances to keep the 4th Commandment, “Honour your father and your mother,” as they work to honour, serve, obey, love, and cherish them. This doesn’t always come off perfectly but it’s clearly there and worth noting.

Christian viewers will be reminded of St. Paul’s advice, “Children, obey your parents in everything, for this pleases the Lord. Fathers, do not provoke your children, lest they become discouraged.” (Colossians 3:20–21) Encouragement and discouragement are a big part of Creed II —having the right encouragement to fight discouragement makes a world of difference both in and out of the ring. The film also delves into the area of self-discipline, a skill necessary in both fatherhood and athletics reflecting St. Paul’s words, “Every athlete exercises self-control in all things. They do it to receive a perishable wreath, but we an imperishable. So I do not run aimlessly; I do not box as one beating the air. But I discipline my body and keep it under control, lest after preaching to others I myself should be disqualified” (1 Corinthians 9:25–27). Keeping this in mind, the film has a strong moral message: the Heavyweight Champion of the World is a perishable wreath and there are more important rewards in life. Adonis, Ivan Drago, and his son Viktor have this to learn as the film concludes. While Rocky understands it, he too has to act on what he knows to be true: family is more important than boxing. Christian viewers can take this one step further when thinking and reflecting on the film remembering that St. Paul is talking about eternal glory and reward in Christ Jesus when he writes, “I have fought the good fight, I have finished the race, I have kept the faith. Henceforth there is laid up for me the crown of righteousness, which the Lord, the righteous judge, will award to me on That Day, and not only to me but also to all who have loved His appearing” (2 Timothy 4:7–8).

Is Creed II as good as Creed (2015)? No, it’s not quite as good. There is more boxing (for some this will be welcome, for others not so much) and much-enjoyed characters return, who in the case of Ivan Drago (Dolph Lundgren) receive a lot more character development than in previous Rocky films. But the film is not a knock-out like Rocky (1976) and Creed (2015). It’s more of a “standing eight-count” and it’s safe to say that the referee will let the franchise keep fighting.

These films are making a name for themselves and have proven that the Rocky franchise still has a lot of life left by doing what other franchises have tried to do but failed: honouring the past and bringing something both familiar and new to the ring with surprising complexity and likability. This is one of those rare films that encourage men toward fatherhood in a world that needs men willing to strive toward being good fathers.

You can also find this article featured in the Canadian Lutheran and the Reporter.