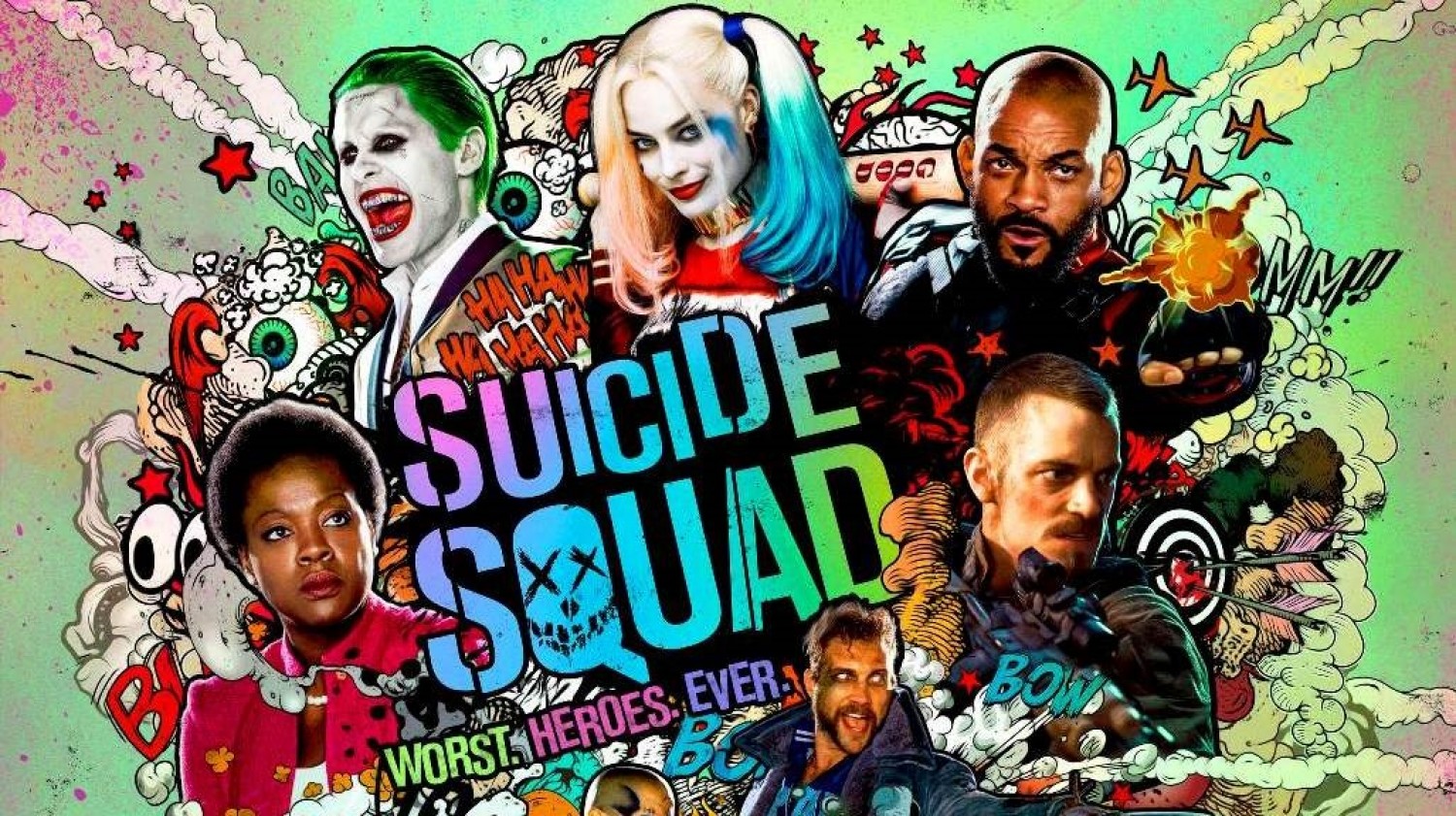 If the heroes of the DC Extended Universe are flawed characters, then the anti-heroes of the Suicide Squad (2016) are damaged losers. They are criminals, killers and deemed virtually unredeemable by society and by heroes like Batman (Ben Affleck) who rounded up most of them for incarceration. They are the dregs of the meta-humans.

Following the apparent death of Superman at the end of Batman v. Superman (2016) and prompted by the question, "What if Superman had decided to fly down, rip off the roof of the White House, and grab the president right out of the Oval Office. Who would'a stopped him?" an enterprising government operative, Amanda Waller (Viola Davis), makes the case for a team of men and women with superpowers of their own which the government could deploy clandestinely to tackle situations beyond the ability of other federal agencies or branches of the US military. She'd been gathering "the worst of the worst" super-villains like the marksman assassin Deadshot (Will Smith) for this very purpose. When asked by a General where these villains were locked up, she responds, "Let’s just say I put them in a hole and threw away the hole." That 'hole' is Belle Reve Penitentiary a secret government site run by a staff as rotten and morally bankrupt as its inmates. From this location, Waller plans to run her black-ops program coercing into service the likes of the fire-wielding gangbanger El Diablo (Jay Hernandez), the genetic abnormal Killer Croc (Adewale Akinnuoye-Agbaje), and the psychotic former psychiatrist Harley Quinn (Margot Robbie)—girlfriend of the infamous Batman antagonist The Joker (Jared Leto). These and a couple more 'disposable' assets, along with their handlers Captain Rick Flag (Joel Kinnaman) and Katana (Karen Fukuhara), are sent somewhere very bad, to do something that'll probably get them killed. However, if they succeed they will receive some perks in the penitentiary and they'll have time shaved off their prison sentences.

The disposable nature of these coerced operatives is the thing Waller finds so attractive. Fitted with explosives injected under their skin they are told by Flag, their handler, "You disobey me, you die. You try to escape, you die. You irritate or vex me... and guess what? You die." Motivated by a desire to continue living, and in the case of Deadshot a desire for his daughter to think well of him and for her to succeed in life, they agree to work for Waller who, like Flag, is confident in their ability to get people to act against their own self-interests. Together they work to stop a rouge demonic operative, Enchantress (Cara Delevingne), an ancient witch possessing the body of June Moone an archaeologist and girlfriend of Captain Rick Flag. Enchantress and her brother Incubus (Alain Chanoine) plot to use magic to destroy the modern world with its machines and computer technology so that mankind can again worship them as 'gods' as the Mayan Civilization had worshiped them in centuries past.

The whole story is rather far-fetched but at its root there is something worth thinking about: the way in which these horrible people within the Suicide Squad are being taken advantage of. While they act tough with each other and present confidence to the world they are truly hopeless, broken people often self-aware of their sin. For example, El Diablo, who in a moment of anger burned to death his wife and children, feels deep remorse, seeking afterward to live a life in which he resists the temptation to use his ability to conjure fire out of thin air. The reality of their condition is demonstrated again when Boomerang (Jai Courtney), an Australian bank robber, says to Harley Quinn, "You're amazing and gorgeous on the outside but you're ugly on the inside," to which she responds, "we're all ugly on the inside." This is as close as the film comes to an outright acknowledgment of original sin.

On the one hand these characters are criminals who relish the fact they are bad guys, while on the other hand, in their quieter moments, they acknowledge they are in need of redemption and have been saddled with evil in their life that didn't come from God. Their sad lot then is that they have no hope. The depths of their hopelessness comes out when El Diablo says of his lethal fire-starting abilities, "God didn't give this to me, why would He take it away?" He and the rest of them are so hopeless that they can't even fathom why God—or anyone else for that matter such as El Diablo's wife who prayed for him—might want to redeem them out of love.

For these characters any glimmer of hope they ever experience in life seems to vanish as quickly as it appears and, because they are so turned in on themselves, they easily fall into the temptation of works righteousness. And Waller takes advantage of this mind-set. She dangles the promise of redemption before their eyes and they bite at the faint glimmer of that promise—a promise she ultimately isn't in a position to fully deliver on.

For a Lutheran viewer, Suicide Squad becomes a sort of analogy of the bogus promise of forgiveness provided by the Roman Catholic Church through the historic and current practice of purchasing indulgences (for reduced time in purgatory) or the more common practice of proscribed penance and works of supererogation (sacrifice above and beyond Christ’s sacrifice). It is a great evil to coerce money, spiritual devotion, and good works out of men and women in exchange for the promise of redemption and forgiveness when God in Christ Jesus has all ready paid the price for that redemption with Jesus' own precious sinless blood, and He has already produced good works and spiritual devotion sufficient for salvation. Taking advantage of the squad’s pitiful estate makes Waller as much of a villain as the super-villains she has under her thumb. At one point, when Harley Quinn first meets Waller she asks, "Are you the devil?" to which Waller responds, "all you need to know is you work for me." Waller may as well be the devil as she has trapped them as much as they are already trapped in the bondage of their sinful criminal acts and the consequences of those acts.

Does the film glorify evil? Yes, and no. With characters like The Joker and Harley Quinn there is a kind of Bonnie and Clyde twisted romanticism and there is also a bit of "sympathy for the devil" thrown in for characters like Deadshot. Early in the film Deadshot is even clearly shown wearing a cross necklace while he walks his daughter home to her mothers apartment. Individually the motley crew who are the Suicide Squad are hyped up to be cool in appearance, but as the film unfolds this hype is revealed as just a thin veneer. It's good to note that Suicide Squad is similar to Heavy Metal music in that it has a firm grasp of the wretchedness of the human condition in terms of original sin, and the fallen-ness of the creation. But it provides no Gospel, no grace, no lasting hope. Interestingly the film even pegs “The World” as an antagonistic force blurting out things like, "You don't owe The World anything ... what has The World ever done for you!" which sounds a lot like the words, "What is the world to me with all its vaunted pleasure when You, and You alone, Lord Jesus, are my treasure!" (LSB 730). Such confessions against The World in the mouth of these super-villains are sadly empty when those saying them have no apparent identity in Christ Jesus. The only grace viewers will find in the film is the grace they bring with them into the theatre. Any reward the Suicide Squad team members receive for their work on behalf of the government is fleeting and temporal and perhaps that's for the best for no one is truly given a full pardon for their sins by virtue of their personal hard work. Lasting true forgiveness doesn't come from the government, it comes from God.

Is the movie any good? It's overall delivery and tone is uneven and in many scenes Suicide Squad feels like it's trying too hard. This may be the result of editing changes. Warner Bros. reportedly became concerned with the sombre tone of director David Ayer’s original cut. While Ayer, who directed the Fury (2014), insists the theatrical is his cut, the company Trailer Park, which produced an initial popular trailer for the film, was brought in to assist with the film’s final edit. In the end, the film is a compromise between Ayer and Warner Bros. who felt comfortable giving it their joint stamp of approval. As might be expected the fingerprints of this compromise can be seen by those who are looking.

Even after working to make the overall tone of the film more upbeat Suicide Squad is still dark and brooding, Guardians of the Galaxy (2014) this is not. It's also violent and unpleasant in moments and then in other moments it's goofy and farfetched. This is not a film for young children and will likely not be a film for a wider general audience and it certainly won't appeal to people disinterested in comic book movies. If there is anything positive in Suicide Squad it's that the film does take some time to add some depth to these minor villain characters who normally don't need to be anything more than excuses for heroes like Batman and Superman to show off. They are presented as men and women in need of true redemption. Sadly, the film doesn't provide any inkling of where that salvation can be found or in whom it can be found. While making that clear may not have been the intention of the film maker as a Christian viewer it's ok to want the true and real grace of God in Christ Jesus to be there.

You can also find this article featured at the Canadian Lutheran.