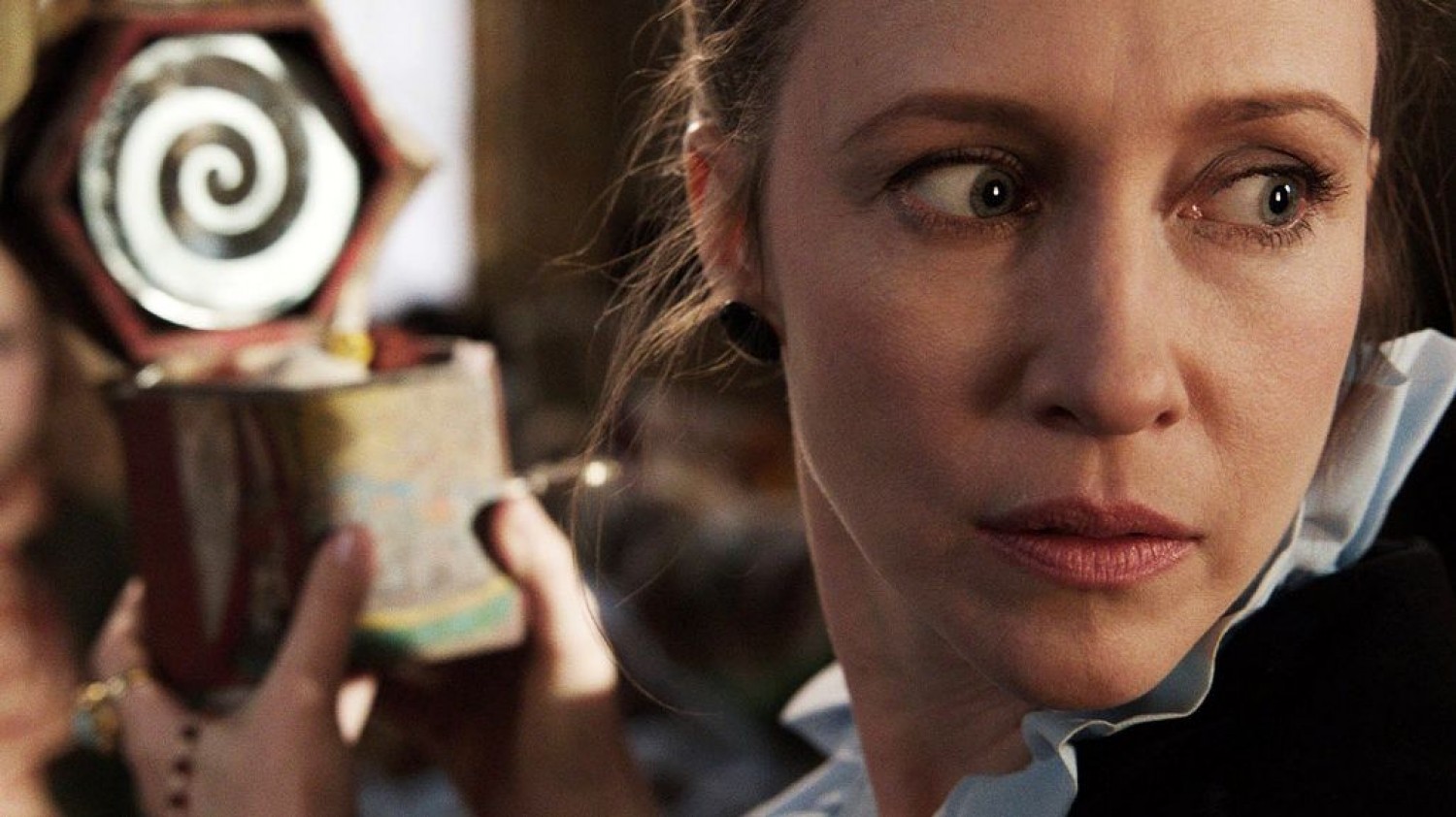 “Immediately [after feeding the 5,000, Jesus] made the disciples get into the boat and go before Him to the other side [of the Sea of Galilee], while He dismissed the crowds. And after [Jesus] had dismissed the crowds, He went up on the mountain by Himself to pray. When evening came, He was there alone, but the boat by this time was a long way from the land, beaten by the waves, for the wind was against them. And in the fourth watch of the night [Jesus] came to them, walking on the sea. But when the disciples saw Him walking on the sea, they were terrified, and said, ‘It is a ghost!’ and they cried out in fear. But immediately Jesus spoke to them, saying, ‘Take heart; it is I. Do not be afraid.’”[1]

Are you afraid of ghosts? Last Friday night the theatre was sold out for the much anticipated horror film The Conjuring – full of people looking to be frightened or at least experience a ‘good’ scare. The film tells the story of the Perron family who buy an old farm house in the Rhode Island farming community of Harrisville. Not long after buying the property, the family begin to think their house is haunted. Enter Ed and Lorraine Warren, New England ghost hunters and ‘demonologist.’ They become involved with the Perron couple and their five girls and from there on out everything about the farm house, the family or the Warrens is called the “Harrisville haunting.”

Ed and Lorraine Warren are a couple you don’t know that you know. They were involved in many stories of haunting from The Haunting in Connecticut to the Amityville Horror. The Warrens had set up an organization called the New England Society for Psychic Research and for decades involved themselves with ghost investigation. The Conjuring employs that tried and true marketing strategy of billing itself as based on a true story. But is it a true story?

Yes, there is a Perron family; yes, they had five girls; yes, they bought a house in the farming community of Harrisville; yes, there is a state called Rhode Island; yes, there was a couple of ghost hunters named Ed and Lorraine Warren, and yes, they visited the Perron family at their farm. Beyond those facts it’s hard to tell what really happened and what didn’t. It’s made more difficult because, over the years, people have called into question the genuineness of Ed and Lorraine Warren. Apart from that, just watching the film will provide its own questions. It’s unlikely what ended up on the big screen happened the way it’s presented. This is neither a documentary nor a docudrama.

The movie is full of almost every type of horror film cliché imaginable. If you’re afraid of creepy dolls, no problem; we’ve got a creepy doll. Afraid of rickety old farm houses with boarded up dirt floor cellars? We’ve got one of those! Are you afraid of ghosts? The movie has a pile of ghosts. And the hits just keep coming: Afraid of birds? We’ve got birds! Afraid of kids with imaginary friends? We’ve got one of those too. What this means is The Conjuring is like a shotgun blast of cheap scares; it’s bound to hit someone in the spot that keeps them up at night. However, since it’s a shotgun blast of cheap scares, it’s unlikely to keep anyone up all night. This film is not like a sniper shot of horror by any means; the kind that lingers with you for weeks or years. Most people will not be ‘scared to death’ by The Conjuring particularly if they’ve seen many horror films.

The real truth of The Conjuring is this: the viewer will only be frightened by the fears they bring with them into the theatre. Some of Jesus’ disciples must have had some fear of ghosts buried away in their mind when He made them get in the boat and go across the Sea of Galilee. Scripture says nothing about them setting out in the boat consciously thinking about this fear, however in the dark of night and in the midst of the storm when they saw Jesus walking toward them on the sea their fear of ghosts jumped up and that fear gripped them. Yet as fledgling Christians they were provided with relief when Jesus said “Take heart; it is I. Do not be afraid.” He was not a ghost. Yes, something unusual was happening, however that unusual thing didn’t include ghosts.

Make no mistake, Christians believe in the supernatural. The Bible includes the devil, angels and demons[2] and Jesus Himself performs exorcisms. In fact, one famous Biblical account is used by Hollywood over and over again. A demon possessed man is asked his name by Jesus; his response indicates the severity of his demonic infestation: “My name is Legion, for we are many." As for ghosts, the Christian need not find this a murky and complicated question. The writer of Hebrews says, “it is appointed for man to die once, and after that comes judgment.”[4] It says nothing about disembodied spirits of the dead rattling chains and spooking people in their homes. “What about the nice ghost of my grandma who came to me with comforting words about how awesome heaven is and how she’s playing cards every day with grandpa?” you ask. Let’s leave the answer to St. Paul: “Satan disguises himself as an angel of light. So it is no surprise if his servants, also, disguise themselves as servants of righteousness.”[5]

To be fair, The Conjuring works on the same idea: those ghosts are not the departed souls of people but are actually demons impersonating the dead. The trouble is the movie later backtracks and suggests the ghosts actually were some previous inhabitants of the Harrisville farm. If the Christian viewer is looking for a consistent teaching on the state of the soul between death and the resurrection of the dead of the dead, they will look in vain while watching The Conjuring.

One thing the film gets right and which many horror films dealing with demons get right is that these supernatural forces are not there to be your friends. In the Gospel of John Jesus says that Satan has always been a murderer and a liar[6] and by extension, all the demons are the supernatural equivalent of a gang of thieves looking to steal away your temporal and eternal life. Regardless of the truth of the events surrounding the real-life Perron family, The Conjuring, as a work of fiction, paints this picture.

What the film gets wrong is how Christians are called to act in the face of supernatural evil. The Conjuring is all about ritual over and against the proclamation of God’s Word. When Baptism is suggested to the family, whose children have not been baptised, it isn’t presented as a comfort or as being baptised into Jesus who has dominion over all things[7]and in whom the baptized can face anything without fear—even the supernatural. Rather, where it is presented in the film, baptism is just one more hoop to jump through, one more option in facing supernatural trouble—or even a requirement for receiving outside help from a priest.

The Christian will recognize that baptism is more than being sprinkled ritually with “hoy water;” it is a gift from God, commanded by Him and connected to His Word. And it’s for everyone. In it, the Christian receives eternal life and forgiveness of sins, delivery from hell, and freedom from the devil. Baptism is the gift of Jesus for you. If Jesus isn’t part of baptism, then it’s missing the main part. The Conjuring makes no effort to connect Jesus with baptism. This is the major problem in The Conjuring: the viewer will see crucifixes and hear about baptism in passing. Jesus will receive “honorable mention.” But truly trusting in Jesus for help—that’s never the answer. Instead you hear how you need to reach deep down inside yourself and stand up to evil based on your own resources.

Hollywood loves movies like The Conjuring because they live in that shadowy realm between the light of day and the dark of night; between empirical knowledge and personal beliefs. The skilled horror film director will exploit both these aspects to try to get under the skin of the viewer. With the right lighting, music, and timing a child’s ball tossed across the room can make a theatre full of adults gasp audibly. The other reason Hollywood loves a good ghost story is that a skilled director can toss that ball across the room without using CGI and still make the audience gasp in horror. This is another reason why The Conjuring could be called a film full of cheap thrills: the budget for the film is reported to be $20 million and in its opening weekend it made just over $40 million. This is exactly the kind of return on investment that will guarantee more films like The Conjuring in the future. Director James Wan is a good bet for investors. He makes inexpensive films that make a lot of money. Years ago he directed the film Saw which set a trend in the horror film genre. Next for him will be Fast & Furious 7.

Is The Conjuring a really great horror film? No. Its success is largely due to a word of mouth campaign and its claim to being based on a true story. This is another in a string of films that hits a popular social nerve—a fear of death and uncertainty in the face of death. With an R rating—not for sex but for sequences of disturbing violence and terror—The Conjuring can’t be recommended for many people; most will steer clear of it. And while it’s not as violent as many horror films, it can be disturbing to viewers who enter into the theatre with fears of the supernatural. For the Christian firmly trusting in Christ Jesus there is nothing frightening in this film. If you are a Christian who finds these sorts of films frightening remember Jesus' words to His disciples “Take heart; it is I. Do not be afraid.” The Christian is never without Jesus as Jesus has promised to be them, and with Jesus there is nothing to fear.  It will be interesting to see how much more money The Conjuring will scare up in the future. With the popularity of ghosts in pop culture it might scare up quite a bit!

Rev. Ted Giese is associate pastor of Mount Olive Lutheran Church, Regina, Saskatchewan, Canada; a contributor to The Canadian Lutheran, Reporter and KFUOam; and movie reviewer for the “Issues, Etc.” radio program. Follow Pastor Giese on Twitter @RevTedGiese. Check out our Movie Review Index!
You can also find this article featured in the Canadian Lutheran
[1] Matthew 14:22-27
[2] Revelation 12
[3] Mark 5:9
[4] Hebrews 9:27
[5] 2 Corinthians 11:14-15
[6] John 8:44
[7] Ephesians 1:20-23 “[God] raised [Christ Jesus] from the dead and seated Him at His right hand in the heavenly places, far above all rule and authority and power and dominion, and above every name that is named, not only in this age but also in the one to come. And [God the Father] put all things under [Jesus’] feet and gave Him as head over all things to the church, which is His body, the fullness of Him who fills all in all.”