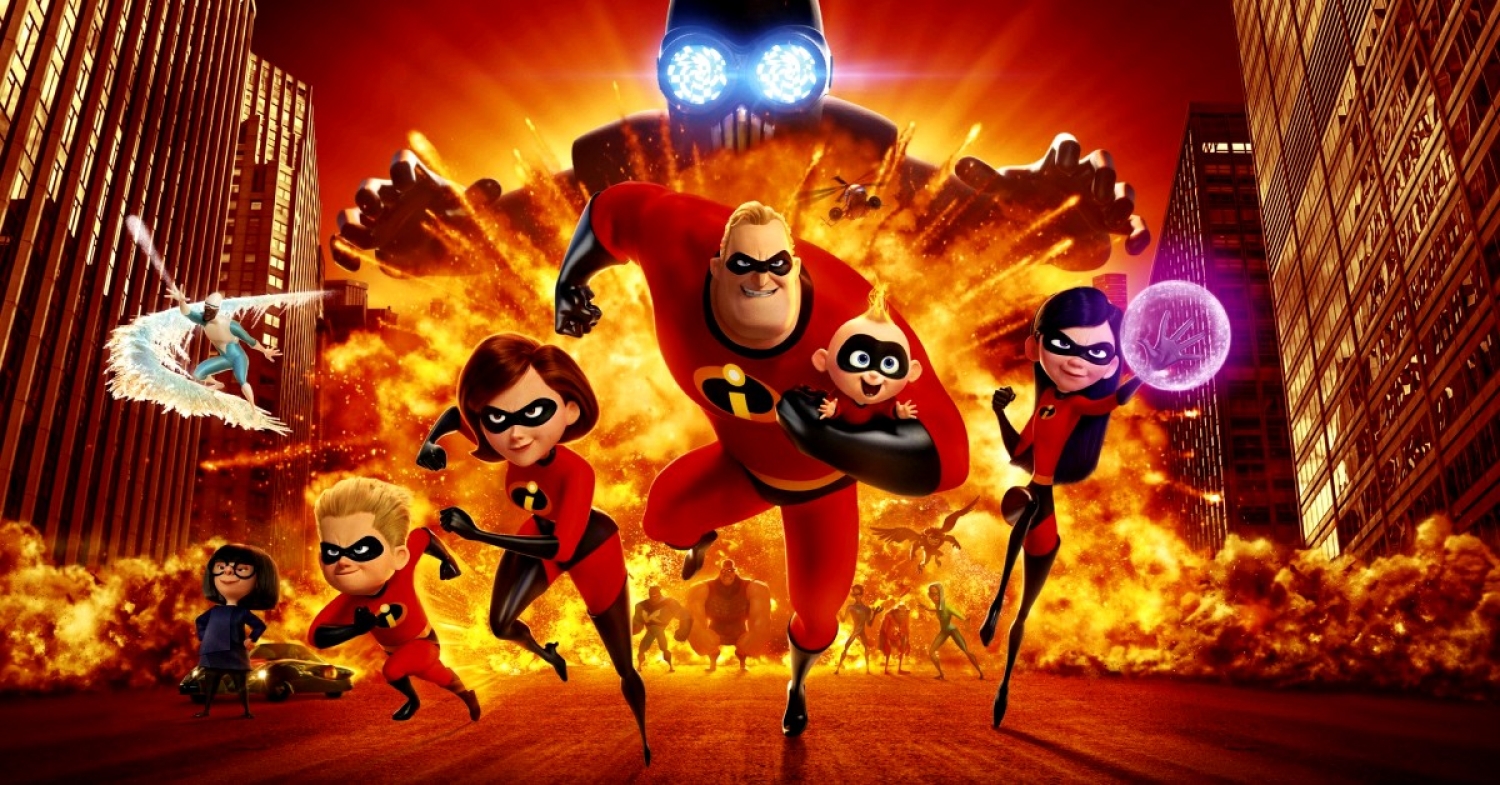 Picking up where The Incredibles (2004) left off, the Parrs—a family of super heroes—save the city from the villainous Underminer (John Ratzenberger) a mole man with a giant drill damaging buildings and robbing banks. While Underminer gets away (only to appear in a post-credit scene as a hook for Incredibles 3), the family is apprehended for breaking the “no superhero laws” only to discover that the government’s superhero witness-protection-style-relocation program no longer exists. In an effort to sway public opinion about “Supers” Helen Parr/Elastigirl (Holly Hunter) agrees to work as a superhero with a body camera leaving Bob Parr/Mr. Incredible (Craig T. Nelson) at home to take care of the kids.

Hired by telecom mogul siblings Winston (Bob Odenkirk) and Evelyn Deavor (Catherine Keener) Elastigirl is offered the job because she is less destructive to public and private property than Mr. Incredible. This shifts the focus of the film’s crime-fighting element from Mr. Incredible (where it was prominently placed in the first film) onto the family’s mother Elastigirl. By the end of Incredibles 2 both have a greater appreciation for each other as parents and superheroes. Initially Bob doesn’t like this reversal but he sees his wife’s new job as a means to an end for him to heroically re-enter public life as a Super. From the outset he sees raising children as the less heroic work. This plays into one of the film’s main themes best summed up in a quote from Edna ‘E’ Mode (Brad Bird) who says to the worn-out and tired father Bob Parr holding baby Jack-Jack: “Done properly, parenting is a heroic act... done properly.”

Along the way viewers watch Bob heroically tackle new math with their son Dash (Huckleberry Milner) and attempt to navigate the emotional world of their junior high school daughter Violet (Sarah Vowell). After he sets himself to the task Bob is not interested in being a substitute for mom and as he takes on domestic life he discovers Helen’s role with the kids is very hard work! At one point while pressed to his limits Bob exclaims to his friend Lucius Best/Frozone (Samuel L. Jackson), “I’ve got to succeed, so she can succeed! So we can succeed!”

Bob’s hardest work is caring for the baby Jack-Jack (Eli Fucile) who, unlike the family believed in the first film, possesses his own super powers—lots of them—from laser vision to gigantic growth to inter-dimensional hopping and physical multiplication and flammability. Most notably he also has the tendency to transform into what looks like a demon baby. This, along with some of his other super powers, was revealed to the villain, Syndrome (Jason Lee), and the audience in the conclusion of the first film. In Incredibles 2 the whole family slowly discovers Jack-Jack’s super powers.

The reason the demon-baby transformation is notable from a Christian perspective is that it is an excellent visual representation of the theological teaching of original sin, the inherent sinful condition passed from father and mother to their children reaching back to Adam and Eve who fell into sin originally in the Garden of Eden. Why Jack-Jack’s transformations fit so well is that they occur when he is overcome with frustration and gives in to anger as a result of not getting his way. The potential for this dangerous chain reaction is always lurking in the character’s background, a root and fountainhead of actual sin ready to lash out. While portrayed in a humorous over-the-top way, parents of babies and small children will recognize these tantrums as will all family members. The question is whether they will recognize it as evidence of an inherent fallen nature. For the Parr family the demon-baby transformation is the most worrisome of Jack-Jack’s superpowers; all the other powers are more or less manageable. Edna ‘E’ Mode suggests Jack-Jack will eventually grow into his powers losing some along the way. When all of Jack-Jack’s powers are added up it’s clear he has enormous potential but being a baby lacks any understanding of the repercussions his powers cause. Dealing with the child is exhausting work and keeps Bob and eventually Violet and Dash on their toes.

Another interesting point the film broaches is what it means to obey laws in society. Many kids’ films might brush past the fact that the mother is breaking the law in an attempt to change it. Not so in Incredibles 2. When Violet asks, “What exactly is mom’s new job?” her father answers, “She’s an advocate for superheroes,” Violet then observes, “But I thought superheroes were still illegal?” Bob changes the subject because he knows she’s right and that Helen knows it too. When they talked privately about the problem Helen said to Bob “You know it's crazy, right? To help my family, I gotta leave it. To fix the law, I gotta break it.” He replies, “You've got to, so our kids can have that choice.”

The question is whether the law is just. Early in the film their government handler Rick Dicker (Jonathan Banks) comments on the state of things regarding the legality of superheroes saying, “Politicians don’t understand people who do good just because it’s right.” Christian families watching the film might want to take some time to talk about the question of when it is Scripturally permissible to break an immoral law. For instance, if the law makes it illegal to help people by employing useful skills and talent in times of trouble, regardless of how incredible and or rare those skills and talents may be, what is a person to do? Does a person refrain from helping in order to keep the law? Or do they help even though they may face reprisals and unjust punishments?

In the book of Acts, when strictly charged by Jerusalem’s temple authorities not to teach in Jesus’ name after Jesus had commanded them to go into the nations and teach in His name, St. Peter and the apostles answered, “We must obey God rather than men” (Acts 5:27-29). They heroically said this knowing their lives were on the line and while their lives were spared, they were beaten and let go with the same warning. They left “rejoicing that they were counted worthy to suffer dishonour for the Name [of Jesus]. And every day, in the temple and from house to house, they did not cease teaching and preaching that the Christ is Jesus” (Acts 5:41–42).

If a hero is going to “do good just because it’s right” then they will have to do so knowing the consequences of their actions. In Incredibles 2 characters like Helen and Bob Parr are willing to face trouble in this way. The ethical tension inherent in following or breaking the law is further heightened in Scripture when St. Paul writes, “Let every person be subject to the governing authorities. For there is no authority except from God, and those that exist have been instituted by God. Therefore, whoever resists the authorities resists what God has appointed, and those who resist will incur judgment. For rulers are not a terror to good conduct, but to bad. Would you have no fear of the one who is in authority? Then do what is good, and you will receive his approval” (Romans 13:1–3). A film like Incredibles 2 raises a good question: What makes a law just and what makes a law unjust? Is a law unjust simply because it’s unpopular or subjectively deemed unfair to a minority? Conversely, is a law just simply because it is popular even when it is objectively unfair to a minority? Christian families will want to make the point that a just law is one that is in line with God’s law and an unjust law is one that goes against God’s law.

The ethical question then is: When can a Christian rightly break an unjust law, and are they willing to courageously do so not only for themselves but heroically for others? While Incredibles 2 begins the conversation it doesn’t present a classroom lecture on the topic. As expected the film gets caught up in the plot to reveal and foil the villain and no one sits down with Violet and Dash to fully explain the ethics of the situation. However, by the end of the film a judge reverses the “no superhero laws” and Supers are legal again. What does this teach? Positively, it teaches that bad laws can be overcome in favour of good laws but it takes courage, action, and a willingness to suffer for others. Negatively, it teaches that any law can be overcome by swaying public opinion with an impressive show of power.

The Incredibles and Incredibles 2 are the kind of films where “good guys” fight “bad guys” and what’s right is pitted against what’s wrong. But in a world where the social contract on what makes something good or right is being dismantled, viewers will need to consider whether they are projecting their personal moral compass on the Parr family whose own morality is just vague enough that anyone wishing to see what they perceive to be an unjust law toppled in their daily life might find a hero in Elastigirl and Mr. Incredible. This is smart storytelling from writer/director Brad Bird’s part at least from a marketing perspective. He clearly wants the film to have as wide an audience as possible. In this way the film mitigates the kind of political polarization that actively seeps into every nook and cranny of modern life—even kids films. Viewers looking for more obvious or concrete underpinnings in the film may be disappointed.

Families with small children will want to consider the impact of the villains on very small children. One character, The Screenslaver, uses hypnosis to control people. Both Elastigirl and Mr. Incredible find themselves under Screenslaver’s control. They and other Supers are fixed with glowing hypnotic goggles which cover their eyes that make them act in ways opposite to their characters. Essentially The Screenslaver makes them into villains for a short but critical part of the film. Since Elastigirl and Mr. Incredible are also mom and dad, very young children may find this theme of “my parents aren’t really my parents” especially disturbing. On the positive side, the idea that people can be manipulated through screens is another good topic to address with kids who are glued to their smart phones and tablets.

Thankfully after a 14-year hiatus Incredibles 2 keeps its futuristic 1950s aesthetic, its Michael Giacchino brassy spy-film soundtrack, and other elements that made the first film so much fun. Fans were worried that the producers may sacrifice some of these to try to appeal to current trends. It’s easy to see where the computer animation has improved over the years and there are moments, particularly action sequences, which are presented more like what viewers expect to see in live action films. Overall, Brad Bird provides a movie experience that, while not as incredible as the first film, is certainly a solid sequel.