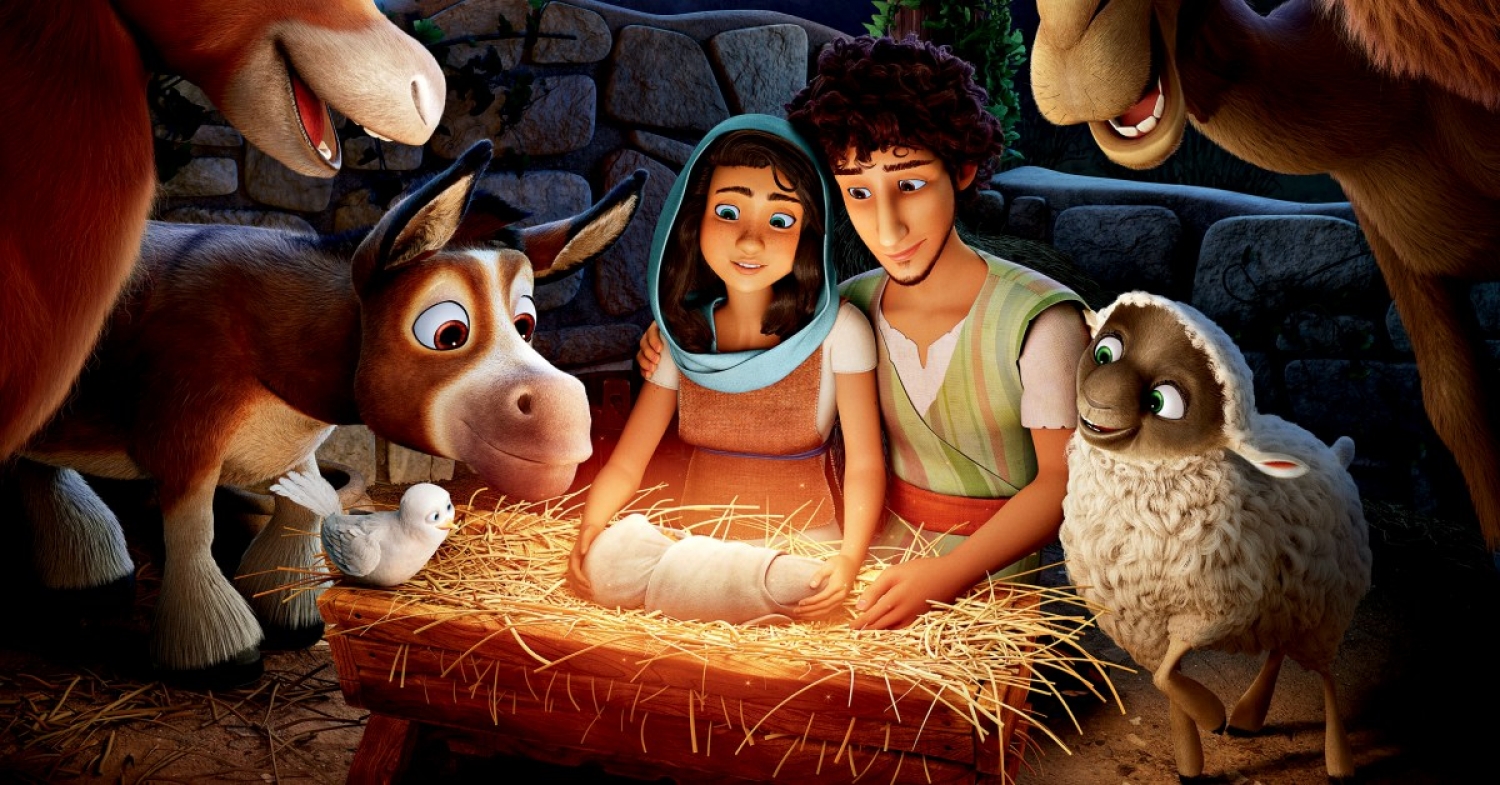 Set during the nine months leading up to the birth of Christ, The Star tells the story of a young donkey (Steven Yeun) and a little white dove (Keegan-Michael Key) who dream of getting out of Nazareth to join the Royal Caravan. With the help of Dave the dove, the donkey escapes his monotonous life at the mill and finds himself living under the roof of the newly-married Virgin Mary (Gina Rodriguez) and Joseph (Zachary Levi). In their first meeting Mary names the little donkey Boaz—Bo for short.

Bo and Dave’s adventure doesn’t lead them to the Royal Caravan as they’d expected. Instead they end up with the Virgin Mary and Joseph as the Holy Family travels to Bethlehem for registration in the Roman census just days before Jesus’ birth. Along the way they are joined by a sheep named Ruth (Aidy Bryant) who saw a new star in the night sky and left her flock to investigate its great light. The animals discover that a soldier and his two dogs (Ving Rhames, Gabriel Iglesias) are tracking the pregnant Mary and that she, Joseph, and the child are in danger.

Bo, Dave, and Ruth work to help Jesus’ family but are hampered by the fact that people can’t understand what animals are saying. Predictably, the soldier sent by King Herod (Christopher Plummer) is foiled, the Son of God is born in Bethlehem, and Bo the donkey learns that he was in the Royal Caravan that matters most—the one that delivered the Messiah to His foretold place of birth.

The general tone of the film is respectful especially when dealing with challenging topics like the Virgin Mary telling Joseph about the visit of the angel and the Child she is carrying. Since the film ends with Jesus’ birth the writers cleverly provide an action sequence for the animal characters as the birth takes place so that when the action is resolved Jesus has arrived and is wrapped in swaddling clothes. Details dealing with angels and even self-aware details like the linking of Scriptural events with the celebration of Christmas are likewise done respectfully and in a warm fashion. The film isn’t attempting to be subversive and doesn’t have a cynical bone in its body. Nothing from the Scriptural account of Christ’s birth is explained away or downplayed. The film knows its audience: Christians, particularly Christian families with young children. That said any parent with small children, Christian or not, will find the film appropriate even for very young or sensitive children. Even the humour is directed primarily toward kids.

The film’s greatest sin is common: conflating the birth of Christ and the visitation of the wise men. St. Matthew writes in his Gospel, “Now after Jesus was born in Bethlehem of Judea in the days of Herod the king, behold, wise men from the east came to Jerusalem, saying, ‘Where is He who has been born king of the Jews? For we saw His star when it rose and have come to worship Him’” (Matthew 2:1-2). The key word is “after.” Matthew makes it clear that the wise men came from the east after Jesus was born not when Jesus was born and even notes “And going into the house, they saw the child with Mary his mother, and they fell down and worshiped him” (Matthew 2:11) — house not stable. This misrepresentation is a longstanding issue Christians encounter in everything from Christmas cards, to nativity sets, to films and TV shows, mainly because the birth of Christ in the Western Church’s liturgical calendar begins the 12 days of Christmas and ends with the wise men’s visitation on the 12th day— Epiphany. This close proximity seems to contribute to their conflation in modern Christian popular culture. In addition, Christmas in the Western Church hits its high point at the beginning of the 12 days of Christmas and in Eastern Rite churches Christmas hits its high point at the end of the 12 days which then leads marketers to “solve the problem” by crowding the manger with extra guests. The Star, like so many congregational Christmas pageants, crams the stable full of animals and wise men even though Scripture never mentions them being present at Jesus’ birth.

When families sit down with their children to read the Bible’s account of the Christmas story they will search in vain for a donkey carrying the Virgin Mary, heavy with Child, up hill and down from Nazareth to Bethlehem. Yet this too is a frequent addition. Popular Christmas hymns like “Away in a Manger” (LSB 365) include speculative sentimental descriptions of the nativity, “The cattle are lowing, the baby awakes, but little Lord Jesus no crying He makes.” In a short disclaimer during the closing credits the film admits it has taken some liberties with the Scriptural story to include the animal characters. What the film makers wanted to do was present the story in a reverent yet fun way for children.

Before or after watching the film, families would benefit from reading the real Christmas story from which The Star builds its plot. The sections of Scripture the film specifically draws upon are: the account of the annunciation (Luke 1:26-38); Jesus’ birth (Luke 2:1-20); and a brief picture of Jesus’ childhood (Luke 1:40) which the film references in the end credits. Luke 1:5-25 and 39-56 are briefly referenced when Elizabeth (Delilah), Zachariah (Joel McCrary), and baby John the Baptizer accompany the Virgin Mary to her wedding and have a brief interaction with the happy couple following their wedding reception. The birth of Jesus and the visit of the wise men as found in the Gospel of Matthew 1:18-25, 2:1-11 will also be helpful to read especially for the parts dealing with King Herod and the wise men.

There is no need for parents to feel anxious about pointing out spots in the film where assumptions about the Bible are presented. For instance, another long-standing popular discrepancy comes in having three wise men in the film. Even Dr. Martin Luther comments in a sermon that this assumption is likely based on “the three gifts” given to the Christ Child. He notes, “We may let the simple have it so and it does not matter much, though we are not told in Scripture whether there were two, three [wise men], or how many. We may safely assume that they came from Arabia or Sheba. This may be inferred from the presence of gold, frankincense, and myrrh, all of which are to be found in that land. We are not to suppose that they purchased them elsewhere because the custom of the East is to make presents the best fruit of the land. Nor should we assume with the painters that one of the wise men brought gold, another frankincense, and third myrrh, but each brought all.”

One of the wise men in the film is voiced by the prosperity preacher Joel Osteen. He doesn’t have many lines and if his name wasn’t listed in the credits it would be hard to pick him out from among the film’s many famous voices. One of the wise men’s camels however, Deborah, has a most recognizable voice: the talk show host and self-help media mogul Oprah Winfrey. The addition of these names may give some Lutheran viewers pause, however in their scripted lines in The Star they in no way say anything false or troubling. And while not every film under the Affirm Films banner can be recommended, The Star, although a talking animal film, is the sort of movie many Christians will want to see in theatres: a clean family film that doesn’t disrespect their Christian faith and provides a positive movie-going experience for young children. The Star will not likely win awards in Hollywood, but it may win the hearts of parents and kids alike who are looking for something better from the movie industry for themselves and their families.