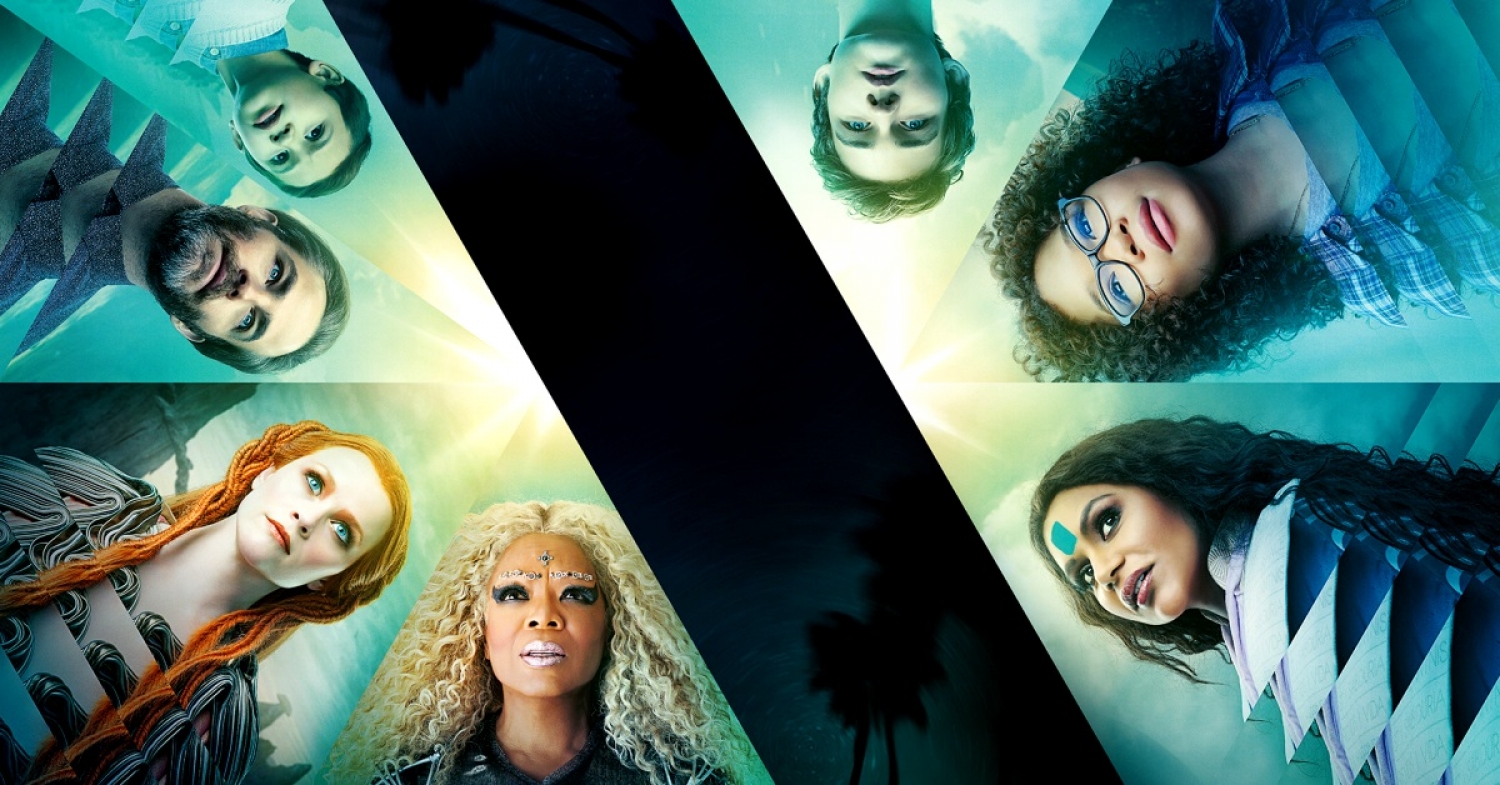 A Wrinkle in Time (2018), directed by Ava DuVernay who also directed Selma (2014), and adapted for the screen by Jennifer Lee (writer of Disney’s giant 2013 hit Frozen) and Jeff Stockwell (writer of the screenplay for Bridge to Terabithia) is loosely based on the 1962 young adult/children’s novel by the liberal Episcopalian fiction writer Madeleine L'Engle.

The film centres on an awkward teen girl, Meg Murray (Storm Reid), and her younger extraordinarily intelligent brother, Charles Wallace (Deric McCabe). Together with Calvin (Levi Miller), another teen from Meg’s school, they go on an intergalactic adventure to rescue their missing scientist father Mr. Murry (Chris Pine). Three otherworldly beings—Mrs. Whatsit (Reese Witherspoon), Mrs. Who (Mindy Kaling), and Mrs. Which (Oprah Winfrey)—reveal to the children that Mr. Murry, who was studying the possibility of using mind power to physically travel through time and space, had not simply vanished four years earlier leaving his wife (Gugu Mbatha-Raw) and family behind, but had been trapped by an evil entity called “IT” on the dark and shadowy world of Camazotz. They further explain that this evil entity is a threat to the whole universe including earth. At one point, Mrs. Which tells Meg, who is challenged to be the warrior needed to rescue her father, that she will need to become one with the universe and one with herself. This makes the film not only a story about the love of children for their father and each other, but also a film about self-love and courage to face evil in the world and in oneself. Sadly, the film investigates both these themes rather poorly.

Adaptation is always tricky and DuVernay and her writers work hard to modernize the 1962 novel. One obvious change is the racial diversity of the cast—even the extras and background actors. The original book is not focused on diversity and these changes to the film in no way upset the telling of L'Engle’s story. The major impact on the story is the removal of all overtly Christian elements found in the book. This however may not be a bad thing depending on the viewer’s point of view. Objectively removing these elements impacts fidelity to the original text and raises the question of whether the material removed is all that great in the first place? For decades many Christians enjoyed the fact that A Wrinkle in Time (1962) mentions Jesus and quotes the Bible. However, the book’s Christian elements are not completely faithful to historic Christian teachings about salvation in Christ Jesus alone. In the end the book espouses a Universalist position of salvation and gets wrong both who Jesus is and the nature of His work of salvation.

L'Engle is quoted as saying, "All will be redeemed in God's fullness of time, all, not just the small portion of the population who have been given the grace to know and accept Christ. All the strayed and stolen sheep. All the little lost ones." This contradicts Jesus’ words from John 14:6: “I am the way, and the truth, and the life. No one comes to the Father except through Me.” And while Scripture talks of God’s love for all people (John 3:16) and His desire for all to be saved (1 Timothy 2:4) it is clear this is done singularly through the life work, death, resurrection, and ascension of Jesus the Christ. This is what both Scripture and historic Christianity teach. While L'Engle includes Jesus in her book she places Him on a list of humans who have “fought as warriors” against the evil of darkness in the universe. Included in the list are people like Leonardo da Vinci, Michelangelo, Shakespeare, Bach, Pasteur, Madame Curie, Einstein, Schweitzer, Gandhi, Buddha, Beethoven, Rembrandt, St. Francis, Euclid and Copernicus. The film version adds people like Nelson Mandela, Oskar Schindler, and Maya Angelou and removes Jesus. By the end of the book and film, Meg is enshrined in this list of great warriors. In the book she doesn’t win her battle by being perfect but by embracing her faults; in the film her victory likewise comes from self-acceptance, but it isn’t her anger that beats the evil IT rather it is her love alone for her brother that saves him. Again, this is both better and worse. This change is both unfaithful to the book, which is generally bad when it comes to an adaptation where a change is qualitatively significant, and yet better than the book in terms of a lesson about confronting evil. Likewise, removing Jesus from the list of warriors against evil is both unfaithful to the source material but simultaneously better because most Christians don’t want to see Jesus as an equal in a list of historic figures; He is above any such list.

In addition to removing the reference to Jesus the film also removes all biblical quotes found in the 1962 book. This changes L'Engle’s story from a liberal mainline protestant religious fantasy novel for children into, at best, a secular humanist fantasy film for children where Mrs. Whatsit, Mrs. Who, and Mrs. Which are no longer celestial beings in the category of stars in the heavens (Judges 5:20, Job 38, Psalm 148:1-3) and guardian angels. Without a revealed explicit reference to God in film they are simply, as Mrs. Which says, “part of the universe” like Meg and anything else. In the absence of God, A Wrinkle in Time (2018) presents Mrs. Which as a kind of autonomous divine larger-than-life being.

Casting Oprah Winfrey to play Mrs. Which adds a complication to the film as Oprah brings her own baggage and personal branding to the role. Most adults will know Oprah is revered by a legion of fans as a sort of guru of the new-age non-Christian/Gnostic-Christian pantheistic self-help ‘religion’ of the “spiritual but not religious” crowd. By casting her thinly-veiled in the character of Mrs. Which, the head divine-being of their little triumvirate, she is further “deified.” At best Oprah, like L'Engle, is a Universalist famously denying the “possibility” that Jesus is the only way to the Father saying on one of her talk shows that, “One of the mistakes that human beings make is believing that there is only one way [and that] there are many paths to what you call God.” Casting an actor who publicly speaks that way in an adaptation of a book that teaches the same idea is going to be an issue when courting a Christian audience for the film.

With the film’s conspicuous absence of Jesus and Scripture and the conspicuous presence of Oprah the whole issue of Universalism is brought to the forefront for Christian readers and viewers aware of these elements in the book. If removing Jesus and Scripture from the film was done to take a religious and spiritual conversation off the table, the addition of Oprah in the way she’s cast puts that conversation back on. For viewers genuinely unaware of these issues the film will simply come across as a trite secular humanist yarn. Is this modernizing L'Engle’s story an attempt to attract an imagined modern audience of ‘nones’? Perhaps, but it isn’t the only instance of tampering that negatively impacts the original narrative.

DuVernay’s film also significantly changes other well-known elements in the book. Notable print editions depict Mrs. Whatsit as a flying centaur, a being with wings for arms, and changing forms. DuVernay’s character still changes forms but inexplicably changes into a cabbage-headed flying carpet plant-thing. The shape of the story is likewise compromised by removing a side trip Meg, Calvin, and her father take at critical juncture to the neighbouring world of Ixchel populated by large fur-covered telepathic sightless beasts with tentacles for arms whose appearance, while frightening, doesn’t match their kind and gentle demeanour. Was the choice to exclude this part of the book from the film made for budgetary reasons? Hard to say. It certainly wasn’t removed to meet time constraints; the film is less than two hours long. It does however impact the flow and narrative of L'Engle’s story. Meg’s interaction with the frightful alien “Aunt Beast” and her conversations with her father on Ixchel are important to developing her relationship with her father and preparing her for the final battle with IT. There is one brief non-sequitur moment where “Aunt Beast” appears in the film—a momentary cameo when the Happy Medium (Zach Galifianakis) exclaims while giving the children a ‘happy’ vision, “Look, there’s Aunt Beast!” If it’s meant to be fan service, it’s an abject failure since those who haven’t read the book won’t know the reference, and it reminds readers of the book they’ve been robbed!

In the end, Lee and Stockwell’s adaptation and DuVernay’s direction remove any sense of mystery or wonder. Characters don’t consistently respond to the fantastical story elements in a believable way. For example, few people would act as nonchalantly to seeing a two-and-a-half storey tall Oprah in their back yard as Meg does in the film. The adaptation also proves unkind to men. The characters of Mr. Murry and Calvin are given less to say and less to do as compared with the book. Oddly, the adaptation also throws science under the bus. Many readers enjoyed the frequent and important role of science in the book’s unfolding narrative. The film downplayed this by excluding scenes involving and referring to Meg and Charles Wallace’s mother’s laboratory where Mrs. Murry works as a scientist.

Technically speaking the film is also below par for this sort of film. While audiences expect a high calibre of special effects in films like this, A Wrinkle in Time (2018) is uneven. Some scenes are visually interesting and well executed, like the field of animated talking-flowers in the first act; others are extraordinarily boring, like the scenes involving IT. Many scenes involving green-screen shots are poor. This may be an indication that Disney is overextending itself and not putting their best people on high profile projects, or it may be the case of poor quality control on the part of DuVernay who is not known for working in the fantasy genre.

Theologically L'Engle’s A Wrinkle in Time (1962) is not as good as C. S. Lewis’ first book in the Narnia series The Lion, the Witch and the Wardrobe (1950) neither is DuVernay’s adaptation of A Wrinkle in Time (2018) as good as director Andrew Adamson’s The Chronicles of Narnia: The Lion, the Witch and the Wardrobe (2005). In his final Narnia book, The Last Battle (1956), C. S. Lewis veered into the same Universalist territory L'Engle embraces which DuVernay’s film works to secularize. This issue never became a problem for The Chronicles of Narnia film franchise as the series stalled with The Voyage of the Dawn Treader (2010) and likely won’t make it to The Last Battle (1956). Perhaps this new film will assist readers of L'Engle’s books to reconsider her theological ideas in the light of Scriptural and historic Christian teaching on the person and nature of Jesus and His work of salvation. Parents should be cautioned that some moments in the film involving Charles Wallace come across as mean-spirited as the result of choices made in the adaptation.

However well-meaning Disney and DuVernay may have been in their desire to bring A Wrinkle in Time (2018) to the big screen, the final product is simply a film that is B-grade, lackluster, mostly glitter with no substance—with a few exceptions. Acting is uneven and there is poor chemistry between actors. For a film about love and bravery it turns out to be a film that neither fully loves its source material nor proves courageous in its execution of L'Engle’s story. This is an instance where poor fidelity to text ends up being an overall good thing as the film will likely inspire few new readers to pick up the book series and will likely fail to inspire further film adaptations.