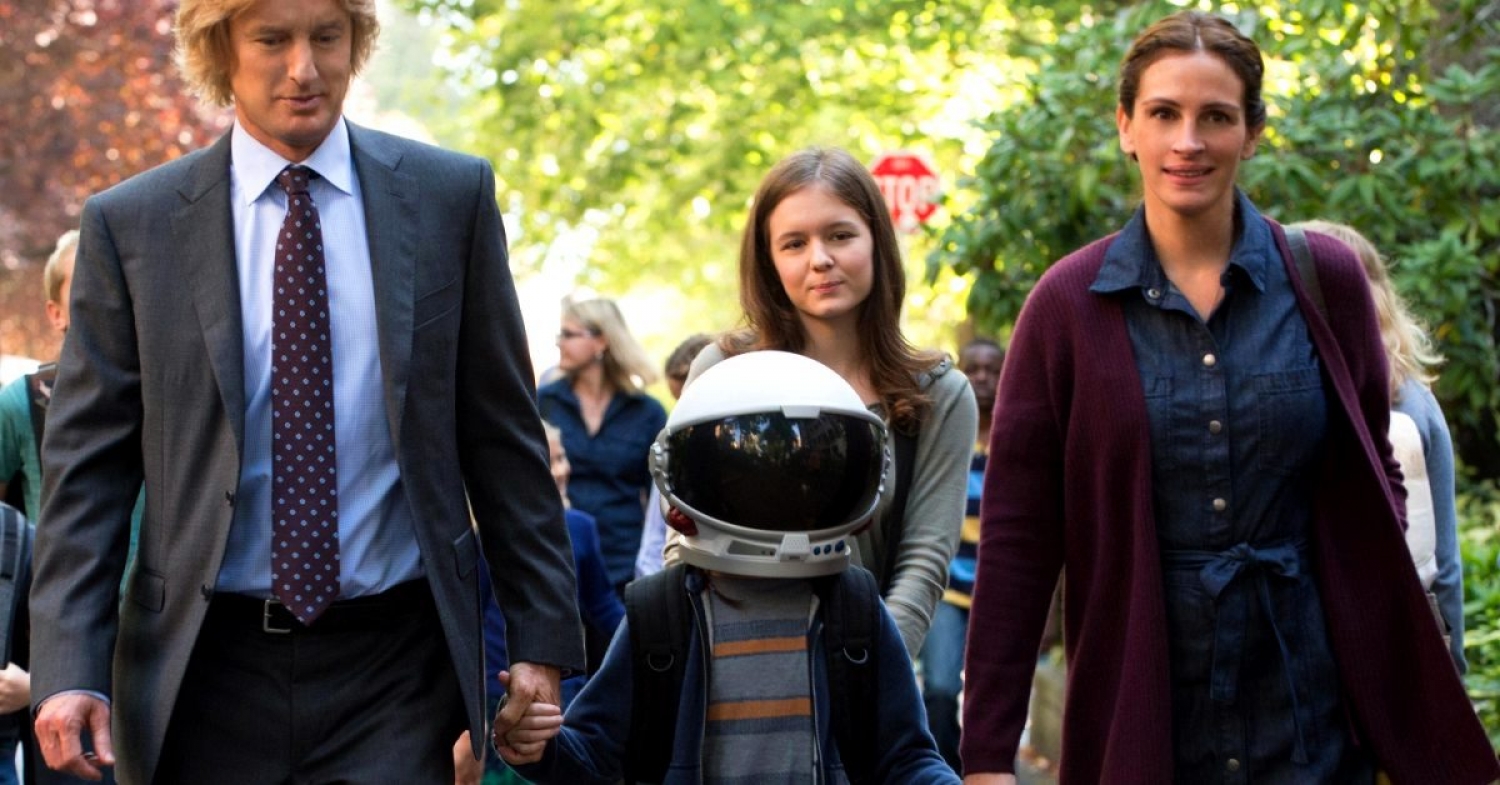 Wonder (2017) is a sometimes whimsical sometimes serious fictional drama about a boy named Auggie (Jacob Tremblay) who suffers from the facial deformity mandibulofacial dysostosis, also known as Treacher Collins syndrome. After many surgeries and years of homeschooling by his mother Isabel (Julia Roberts), Auggie enters Beecher Prep, a private preparatory school, in his Upper Manhattan New York City neighbourhood. The school is named after Henry Ward Beecher, a nineteenth century American Congregationalist clergyman, abolitionist, and human rights advocate. The film follows Auggie’s entry into grade five from his first day to the last day of the school year with all the personal ups and downs he experiences along the way.

The film is based on a best-seller by novelist R.J. Palacio who was inspired to write Wonder by an incident she experienced with her children while buying ice cream. When her youngest son saw a boy with mandibulofacial dysostosis he became frightened and she started thinking about creating a book about a boy who had to face a world that didn’t know how to face him back—basically the need for kindness when others, tempted by fear, prefer cruelty and pettiness. This ice cream shop incident is referenced both in her book and in the film adaptation.

Wonder fits nicely into a couple of film genres. First, it’s an inspirational film like Mr. Holland’s Opus (1995), or Dead Poets Society (1989), in this case focusing squarely on the students and Auggie’s family rather than a teacher. This means Wonder has more in common with something like Chariots of Fire (1981). Second, it’s a film in the same vein as Forrest Gump (1994), Simon Birch (1989), My Left Foot (1989), Mask (1985), or The Elephant Man (1980). Viewers see a character struggling with not being “normal.” While Auggie desires to fit in he is also painfully aware that because of his medical condition that will likely not happen. What the film does well is present the possibility that everyone in one way or another is dealing with the same underlying issues as Auggie: wanting to belong, fit in, and have a full and rich life absent of bullying and abuse.

Thankfully the film has an intertwining narrative so it doesn’t spend all of its time on Auggie. In fact, the movie would have been entirely insufferable had it not included a generous investigation of some of the other people in Auggie’s life. A good example is his older high-school-aged sister Via (Izabela Vidovic) whose life orbits around her younger brother. While supportive, she genuinely feels lost in the shuffle within their family. At one point, in a bit of narration, she praises her artist mother for having a good eye for illustration and drawing adding that she only wished she would use her eye to look at her the way she looks at her son. Via is essential to grounding the film in some kind of reality as she is one of the few characters who reminds Auggie that everything isn’t about him. In the end she has a romance, deals with friendship and family issues, and has her own moment of success which, while all interconnected with her brother, feel like a storyline that could stand alone from Auggie and could be worthy fodder for their own film. These elements which focus thoughtfully on the lives of the people around Auggie provide a stronger context for his story; had they been cut to spend more time on Auggie the film would likely have collapsed under the weight of its subject matter.

Alongside themes of gentleness and respect the film deals repeatedly with coveting and bearing false witness. Viewers encounter the coveting theme in connection to desiring another person’s reputation or the attention they receive because of their circumstances. In Wonder this frequently leads to bearing false witness. For instance, Via, feeling dejected at the apparent loss of her best friend Miranda (Danielle Rose Russell) after summer holidays, lies to a new classmate Justin (Nadji Jeter) telling him that she is an only child in part because everything revolves around Auggie. On the flipside it’s revealed that her former friend Miranda, who apparently always felt plain and boring when compared to Via and her family, lied while working at a summer camp. Miranda’s lie was to pretend her life was like Via’s and she had a little brother with the facial deformity. This lie made her popular at camp but when she returned to school in the fall she was ashamed and withdrew from Via and her family. These instances of coveting and bearing false witness all intersect with a sustained investigation of “reputation” opening the door to questions like: Do the characters own their own reputations? Are they trying to change their reputation? How do they treat the reputations of others? And in the case of Auggie, should a person’s reputation be based on how they look? These questions are all worthwhile to consider.

The Eighth Commandment: You shall not give false testimony against your neighbour. What does this mean? We should fear and love God so that we do not tell lies about our neighbour, betray him, slander him, or hurt his reputation, but defend him, speak well of him, and explain everything in the kindest way.

Auggie’s homeroom teacher, Mr. Browne (Daveed Diggs), uses secular-friendly precepts to teach morals in his classes. For instance, a quote on the chalk board, which reflects some of what the Eighth Commandment teaches, reads: “When given the choice between being right or being kind choose kind.” In the context of Wonder, this precept reflects the concept of supporting someone who has had their reputation hurt or is in danger of having their reputation hurt by defending them, speaking well of them, and explaining everything in the kindest way. So, on the surface, the back half of the quote is in keeping with the explanation of the Eighth Commandment. However, the quote is from Wayne Walter Dyer (1940-2015) an American self-help author, and a motivational speaker, whose books can’t be recommended. Dyer fits nicely into the “spiritual but not religious” category so popular today. He peppered his books with biblical quotes which made him attractive to some Christians when in reality he would have more in common with recent authors like Eckhart Tolle and Deepak Chopra. The film also includes precepts like “Your deeds are your monuments,” from an inscription on an Egyptian tomb, and “Audentes fortuna iuvat (Fortune favors the bold)” attributed to Virgil the Latin poet and author of the Aeneid. These words of wisdom are intended to teach the prep school children morals and help build character. Christian parents and teachers will want to be careful to remember that the true curb, rule, and guide necessary for promoting a virtuous life and the building of character are the Ten Commandments. All the rest, however good from a worldly perspective, must play second fiddle to God’s Word.

It’s good to remember that the underlying teachings of people like Dyer, a sort of manifestation of wish fulfilment, have more in common with things like The Secret (2006) than with Christian theology and the Ten Commandments. As the film unfolds the connection to this way of thinking becomes clearer, especially at the end of the film. On the last day of school the principal, Mr. Tushman (Mandy Patinkin) presents Auggie with the Henry Ward Beecher Medal of Honour for good works because of the positive impact he had on others and the school. It would be enough that this student faced his challenges and made real friends, like Jack Will (Noah Jupe) and Summer (Millie Davis), and experienced personal character growth but adding public recognition is a bit much and crosses the line into wish fulfilment. This kind of fantasy narrative doesn’t reflect what many bullied children experience.

That said, Wonder presents a positive example of a traditional family where mother and father (Owen Wilson) are in the home and love each other and their children. Both Roberts and Wilson give solid performances as the children’s parents. Wilson as Auggie's dad provides a very positive father figure. From the beginning of the film to its end Auggie is portrayed as an average kid on the inside; he loves Star Wars, science, and spending time with his family. It’s his external health-related and social challenges which need to be addressed. Thankfully in Wonder these issues are not aggravated by his mother and father, another positive aspect when many films derive their drama from portrayals of broken families, families that include an abusive father, or an absent or dead mother. It is encouraging to see a loving and warm traditional family in a Hollywood film.

There was one additional positive moment worth noting, that viewers might miss as it passes quickly, when his parents watch Auggie walk away on his first day of school they pause for a moment and his mother prays, “Dear God, make them be kind to him,” again this is a positive thing, however it would have been even better if Christian faith truly was part of Auggie’s family’s life. Hopefully Wonder will be an encouragement for people who interact with individuals who have Treacher Collins syndrome to be kind.