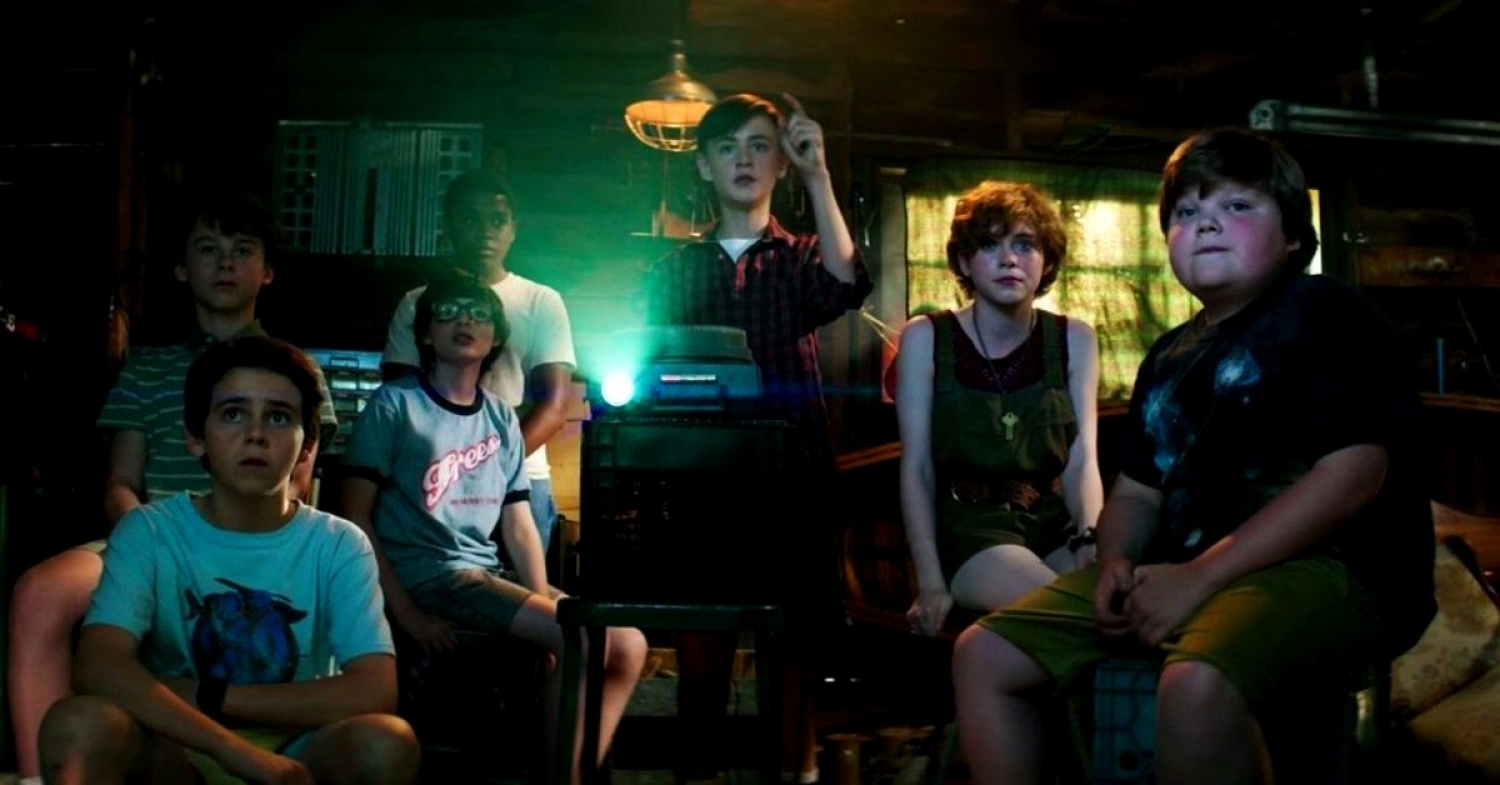 Every 27 years the town of Derry, Maine undergoes a series of tragedies often involving children. Lurking beneath the tragedies is a malevolent force, an evil entity feeding off the fear of its victims, stalking the weak and defenceless, hunting the put-upon and the outcast. What is this evil force? What is it called? “It.” This is the premise of Stephen King’s 1986 horror novel of the same name which tackles, among other things, the topic of fear. His book first became a two-part TV miniseries for ABC in 1990, now it’s the basis for a two-part film series directed by Andy Muschietti.

This first film revolves around a group of seven children from Derry on the cusp of their teenage years: Bill Denbrough (Jaeden Lieberher); Ben Hanscom (Jeremy Ray Taylor); Richie Tozier (Finn Wolfhard); Stanley Uris (Wyatt Oleff); Mike Hanlon (Chosen Jacobs); Eddie Kaspbrak (Jack Dylan Grazer); and Beverly Marsh (Sophia Lillis). In his novel King interweaves their storylines switching back and forth between their childhood and adult selves. The film focuses exclusively on that brief window of time between the world of their childhood and the increasingly adult world lying ahead of them. (The second film will likely deal primarily with their adult lives as they revisit their childhood fears and traumas.)

Capitalizing on the recent phenomenon of Stranger Things (2016), which pays homage to King’s novel It (1986) and other softer ‘80s pop-horror-adventure-films involving children like Richard Donner's The Goonies (1985) and Fred Dekker’s The Monster Squad (1987), Muschietti modernizes King’s coming-of- age story setting It (2017) in 1988 not in the 1950s which means the second film will focus on the adult versions of these characters 27 years later in 2015. Riffing on other popular 1980s films involving similarly-aged children like Steven Spielberg’s E.T. the Extra-Terrestrial (1982); Tobe Hooper/Spielberg Poltergeist (1982) and the anthology film Twilight Zone: The Movie (1983), Muschietti also taps into the nostalgia of older viewers who first read King’s novel back in the 1980s and watched the 1990 TV miniseries.

As in many of these 1980s films where children used more salty language than is normally acceptable in modern films involving kids, Muschietti’s child characters use decidedly R-rated language. This is faithful to King’s book and is more like the R-rated adaptation of King’s novella The Body (1982) which was made into Rob Reiner’s Stand by Me (1986) and less like Richard Donner's PG rated The Goonies (1985) which includes language that wouldn’t be acceptable in a PG-rated film today. Why is this noteworthy? At this point it’s important to point out that just because a film has seven children as lead characters doesn’t make it a kid’s movie or a movie appropriate for children, even if it shares other deeply nostalgic, more innocent threads of comparison to those softer 80s pop-horror-adventure-films involving children. It is legitimately charming and humours at certain points especially in some of the earlier scenes as the kids are becoming friends. The humor and charm isn’t forced or flat as is the case in many horror films. A little well placed humour goes a long way as the majority of what these characters are dealing with is not funny.

As It unfolds these young characters deal with various manifestations of the murderous evil plaguing Derry which predominantly appears in the form of Pennywise the Dancing Clown (Bill Skarsgård). In addition to the horror of this creature, these poor souls are likewise dealing with equally horrifying childhood personal troubles like bullying, molestation and physical abuse, Munchausen syndrome by proxy (MSBP), as well as grief and loss. The six boys organically form what they call the Losers' Club which Beverly Marsh eventually joins. Each kid has increasingly more daunting personal hurdles to overcome. For example: Bill Denbrough stutters; Stanley Uris can’t seem to master his preparations for his Bar Mitzvah even though his dad is the town rabbi; Ben Hanscom is overweight and relentlessly bullied by a gang of young local psychopaths led by the murderous Henry Bowers (Nicholas Hamilton); and Beverly Marsh is falsely accused by girls in her school for being promiscuous—an accusation that isn’t helped by spending all summer hanging around with six boys in the Losers' Club while fending off the sexual advances of her father (Stephen Bogaert).

Even without an evil entity feeding off their fears, these young people would still be living—to varying degrees—horrific lives. This is important because in King’s novel these horrors are presented in just as grim and R-rated a fashion as the other worldly frights and horrors. Yet Muschietti and his writers present them as B-plot character development fodder, minimizing and sanitizing them with a PG/PG-13 rendition of King’s R-rated book. The result is a film that comes across more like a matryoshka Russian nesting doll where there is a PG/PG-13 B-plot tucked into the R-rated A-plot.

Christian viewers will want to contemplate the overarching theme of “fear in the midst of hardship.” There is a Christian response to fear which the film in one way addresses well and in another way misses the mark on. As in real life fear is most dangerous when experienced alone. This is the coming-of-age lesson the children learn. One segment of the film is set in a decrepit house that may remind viewers of Monster House (2006) another King-influenced PG pop-horror-adventure-film involving children. In It the decrepit house is where Pennywise first seems to reside and where members of the Losers' Club begin to learn that they must face their fears together and avoid facing them alone. From the beginning of the film, where Bill’s younger brother Georgie Denbrough (Jackson Robert Scott) goes missing along with other kids in the community, straight through the rest of the film, the malevolent Pennywise is depicted as an evil seeking out its victims in a way that may remind Christian viewers of St. Peter’s description of the devil: “Be sober-minded; be watchful. Your adversary the devil prowls around like a roaring lion, seeking someone to devour. Resist him, firm in your faith, knowing that the same kinds of suffering are being experienced by your brotherhood throughout the world” (1 Peter 5:8-9). The idea of resisting the devil’s attacks is picked up by St. James in his epistle and echoes through this film, “Submit yourselves therefore to God. Resist the devil, and he will flee from you” (James 4:7). Resisting the devil and his attacks and temptations to sin and fear is always easier when the one resisting is not alone. It highlights this biblical truth, even if it does so in an over-the-top manner.

What It misses is that Christians, who are always encouraged to gather, “not neglecting to meet together, as is the habit of some, but encouraging one another, and all the more as you see the Day drawing near” (Hebrews 10:25), are never truly alone. In Baptism they are in Christ and God has promised to be with them. Repeatedly, Scripture tackles fear with the promise that God is with His people no matter the circumstances. In Isaiah God says, “Fear not, for I am with you; be not dismayed, for I am your God; I will strengthen you, I will help you, I will uphold you with My righteous Right Hand” (Isaiah 41:10). David prays in Psalm 56, “When I am afraid, I put my trust in You. In God, whose word I praise, in God I trust; I shall not be afraid. What can flesh do to me?” (Psalm 56:3-4). This Psalm reflects David’s attitude toward God’s help in the midst of his fear as he runs from King Saul who seeks his life. In the face of both mundane and supernatural evils Christians are invited to trust God and to remember they are not alone; God is with them. “Have I not commanded you? Be strong and courageous. Do not be frightened, and do not be dismayed, for the LORD your God is with you wherever you go” (Joshua 1:9), even if they go into a dark flooded basement, a city storm drain or sewer, a decrepit abandoned house, or their own family home, school or community. Wherever trouble is lurking God is also present and as St. Paul says, “If God is for us, who can be against us?” (Romans 8:31).

Stephen King is a prolific writer of more than 50 novels and 200-plus short stories. Some of his novels, like Carrie (1974) and The Shinning (1977), have repeatedly been made into film and TV projects, and as It enters into that same repeat company it might be worthwhile asking why people want to continue drawing from this particular horror-filled well. The obvious reason could easily be the character of Pennywise, famously portrayed by Tim Curry in the 1990s TV miniseries, which again is horrifying in this film adaptation and will no doubt cause another generation of viewers to dislike clowns. In fact most viewers will find the murderous Pennywise to be very frightening indeed. That said there might be another reason why people wish to return to this story. King has said that the inspiration for writing It was twofold: first he liked the fairly tale of The Three Billy Goats Gruff and had originally envisioned Pennywise as a troll living in a sewer system instead of under a bridge; and second, he was so frequently asked about his upbringing and life experiences in relation to his books that he wrote It as a kind of final exam to respond to all those questions. The book, the TV miniseries, this film all tap into the flight instinct that makes children, and sometimes adults, rush up the stairs to get out of a dark basement, the instinct that makes them look twice at the unexpected shadow in their dark closet in the dead of night.

If King's book was a kind of final exam on fear does Muschietti’s film adaptation make the grade? Overall It is better than many projects adapted from King’s works but not as good as the best adaptations: Misery (1990), The Shawshank Redemption (1994), Dolores Claiborne (1995), or The Green Mile (1999). Muschietti’s It suffers from a fixation on the super natural other-worldly frights while shying away from the more mundane grinding natural evils of life. Had Muschietti’s balance of these two elements of King’s novel been better the film would have more impact.

For viewers plagued by their own fears, anxieties and traumas It holds no lasting answers apart from the obvious “don’t go it alone.” Scripture however records King David’s prayer and provides the better answer, “I sought the LORD, and He answered me and delivered me from all my fears” (Psalm 34:4).

It is not for everyone—horror films are like that, much like romantic comedies and sci-fi films. By virtue of their genre they don’t serve a broad audience. That said, It is making a lot of money which indicates that King’s source material and Muschietti’s film have managed to transcend genre and hit a wider audience. Even if you don’t find a movie like this appealing its current popularity provides opportunity to talk about fear from a Christian perspective and point to the trust Christians have in God as they resist the devil and hold fast to Christ Jesus.