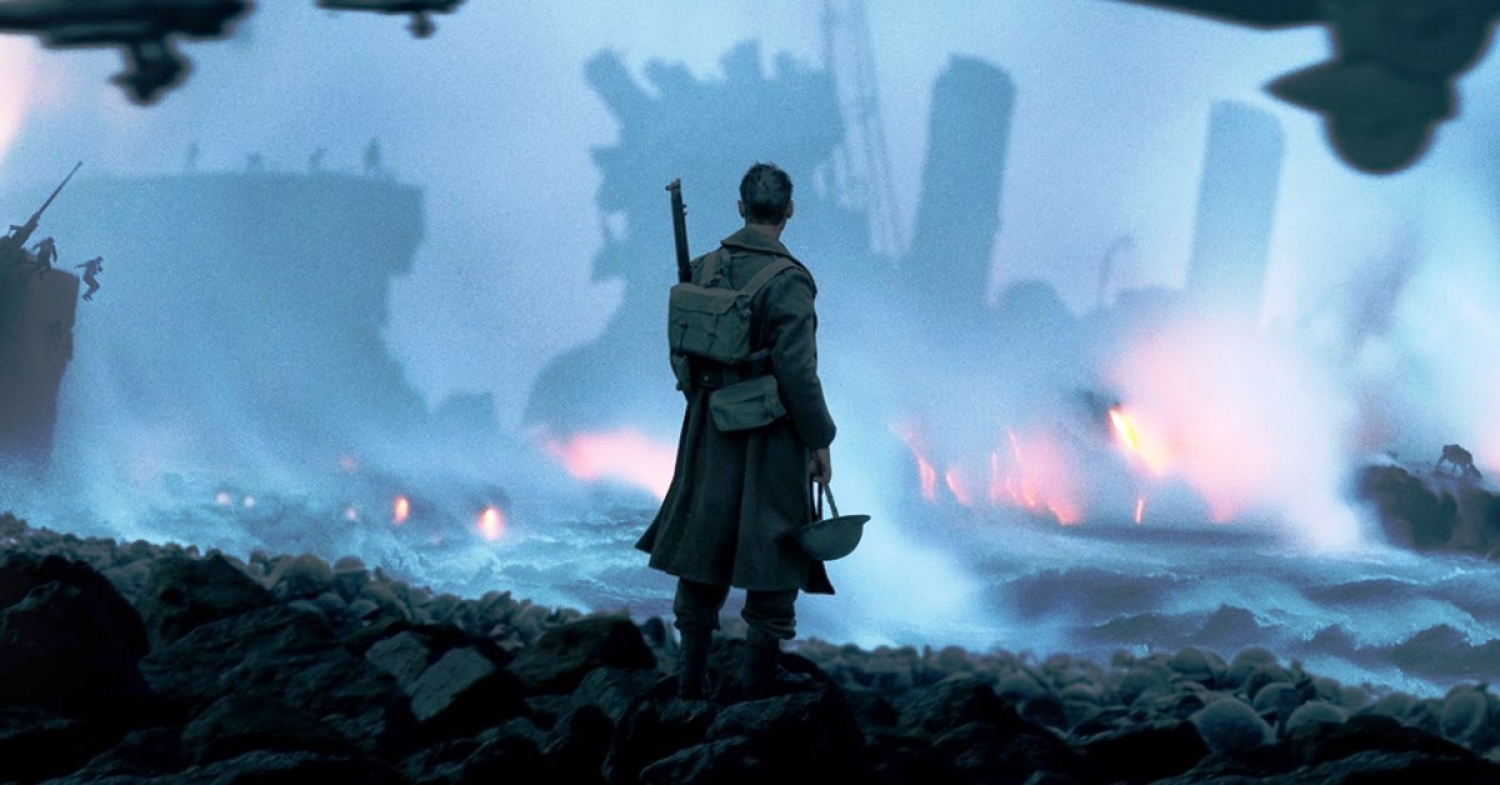 A neatly-told story woven in sacrifice

Writer/director Christopher Nolan has done for the WWII evacuation of Dunkerque, France (code-named Operation Dynamo) what Steven Spielberg did for the Allied D-Day amphibious landing in Normandy, France (codenamed Operation Neptune). However, where Spielberg’s Saving Private Ryan (1998) left the French beach and the English Channel to tell a more conventional war-genre narrative, Nolan’s film stays on the beach and in the beleaguered English Channel making Dunkirk (2017) a more neatly-told story and, by order of magnitude, a more claustrophobic and relentlessly intense film. Interestingly, Nolan does this without an R-rating making Dunkirk a much more accessible film for a wider audience.

Dunkirk details the English evacuation of its expeditionary force from continental Europe after an unexpected, aggressive, and successful push of the Nazi German army and its nimble Panzer division’s repeated blitzkrieg pinned British and French ground troops against the English Channel on the sandy beaches of Dunkirk, France. While Britain, France and New Zealand had declared war against Germany following the Nazi invasion of Poland on September 3, 1939, not a lot happened in the first months of the war. Then on May 10, 1940 the English and Allies deployed an expeditionary force and by May 20 everything was falling apart as the force was routed and bottled up at Dunkirk.

In telling the story in Dunkirk director Noland has crafted an extraordinarily intense and at times unnerving film about a military catastrophe which against all odds was snatched out of the fires of total defeat. Part of his strategy to keep viewers on the edge of their seats is the disorienting way in which the narrative develops. While chronological, the film is not precisely linear—at least not in a conventional way. Three separate narrative threads weave together into a single epic tapestry but as they converge each thread covers events that would have taken different lengths of time to chronologically unfold. Essentially, it’s like this: imagine three men arriving at an intersection: one walking, one on a bike, and the other driving a car. They each arrive at the same point, at the same moment, but it took longer for the man to walk there, less time for the man on the bike, and even less time for the man in the car. Now intercut these three stories and at first the impression is they are each happening simultaneously, particularly if their respective story is told in equal parts. This is what viewers get with Dunkirk: a temporal disruption to the natural unfolding of time that heightens the tension and drama.

The three narrative threads Noland takes up to tell the evacuation story are land, sea and air. The story that begins on land with 400,000-plus stranded ground troops unfolds over a one-week timeframe. The sea-based story largely focuses on the conscripted small to midsized British personal and commercial boats deployed across the English Channel to ferry soldiers to larger ships or back to Britain directly. This narrative thread unfolds over a one-day time frame. Meanwhile, the story that takes place in the air over the English Channel and the beaches of Dunkirk unfolds over a one-hour time frame. Each narrative thread receives about the same screen time yet are intercut in such a way that it takes some time for the audience to understand just how everything is unfolding.

Like Spielberg’s Saving Private Ryan Noland’s central characters are fictional additions to the historic account. The land narrative revolves around a clever and resourceful young British private named Tommy (Fionn Whitehead) who works determinedly to get off the beach and back to England while most soldiers await rescue patiently. His efforts could best be summed up with the phrase “two steps forward, one step back,” The drama from the land point of view comes from the tested patience of the ground forces as they have to wait while exposed to enemy air attacks. Christian viewers may be reminded of the words of St. Peter about how “the Lord is not slow to fulfill His promise as some count slowness, but is patient toward you, not wishing that any should perish, but that all should reach repentance” (2 Peter 3:9). The British expeditionary force is essentially being asked to trust that their rescue is coming no matter how bleak the situation might look.

The narrative of their rescue by sea is centred on a small pleasure vessel captained by Mr. Dawson (Mark Rylance), his teenage son Peter (Tom Glynn-Carney), and Peter's friend George (Barry Keoghan). While some vessels were commandeered by the Royal Navy and manned by sailors, many others like this fictional boat were piloted by their owner/operators. By sticking to the historical details, primarily the young age of most of the British expeditionary force soldiers, Noland ends up highlighting a striking feature of this rescue. The men who came to the aid of the soldiers by sea are older and some younger teenage boys. The image of the fathers and grandfathers of Britain rescuing their sons is a moving element of the film and the kind of thing rarely witnessed in films today.

Told with little dialogue Noland’s Dunkirk still manages to emphasize the interactions, both positive and sometimes negative, between men under stress on the battle field. For the Christian viewer, what emerges is a meditation on the Fifth Commandment:

You shall not murder. What does this mean? We should fear and love God so that we do not hurt or harm our neighbour in his body, but help and support him in every physical need.

Apart from the Nazi Luftwaffe aircraft pilots no German soldiers are visible, only the sporadic and opportunistic gunfire of an enemy army consistently situated outside the cinematographer’s frame. This adds to the mounting suspense and makes Dunkirk less about the German attackers and more about the evacuation and rescue. Although the film depicts intermittent acts of selfishness and/or the temptation to act selfishly out of self preservation by some soldiers, overall the film is about rising to fulfill the Fifth Commandment—men, both military and civilian, risking their lives to save the lives of others. For example, when Mr. Dawson, Peter and George rescue their first stranded solider (Cillian Murphy) he selfishly wants them to take him, and him alone, back to Britain. Instead they carefully distract and contain the belligerent soldier to rescue additional soldiers.

The rescue narrative from the air perspective also shows this high degree of willingness towards self-sacrifice. Noland eventually homes in on a single Royal Air Force Spitfire pilot, Farrier (Tom Hardy), who even when he could have turned back to England for mechanical reasons endeavours to “help and support his neighbour in every physical need” by continuing to engage the enemy.

In a spring and summer awash with big budget super heroes and sci-fi Dunkirk provides a unique and intense film-going experience. It’s commitment to detail and near flawless execution make it one of the best war films made to date and puts it into contention for the upcoming awards season. The freshness of the Noland’s narrative approach will keep viewers on the edge of their seats and after leaving the theatre the three threads of the narrative start reorganizing in the mind and act like a memory—a memory that honours the hour in the air, the day at sea, and the week on land for all those involved at Dunkirk. Even though the story is told primarily with fictional characters Noland manages to honour the real men (and some women nurses) caught up in the events of the WWII evacuation in a candid and cathartic way befitting of their sacrifices.

A word of warning, while the film is rated PG (Canada) PG-13 (MPAA) it can’t be stressed enough that this film is an intense experience, especially if viewed in IMAX. People suffering with anxiety, claustrophobia, fears of water or drowning, and those who generally have a hard time with war films will want to think long and hard before attending Dunkirk. The film will likely be far too challenging for small children and sensitive children entering their teenage years.