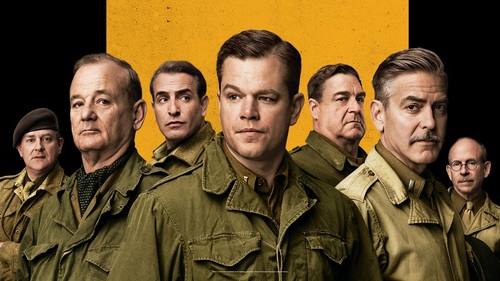 Lt. Frank Stokes: "You can wipe out an entire generation, you can burn their homes to the ground, and somehow they’ll still find their way back. But if you destroy their history, you destroy their achievements; then it’s as if they never existed. That’s what Hitler wants, and that’s exactly what we’re fighting for."

The Monuments Men is a story based loosely on an amazing and little-known chapter in the history of World War II. On June 23, 1943 American President Franklin D. Roosevelt made provision for the “American Commission for the Protection and Salvage of Artistic and Historic Monuments in War Areas.” As a result, 345 men and women from 13 countries were eventually called into service to become the Monuments, Fine Arts and Archives Section unit. The Monuments Men tells their story. While based in history, The Monuments Men is more of a sketch of what happened and not a hard historical account.

The spirit of those 345 men and women is condensed into an ensemble cast of semi-fictionalized characters who are loosely based on real people. Robert M. Edsel, the author of The Monuments Men: Allied Heroes, Nazi Thieves and the Greatest Treasure Hunt in History the book upon which the film is based understood the daunting task of telling this story. In the book’s forward he says that even though he'd planned to focus on just eight of these men, "the vastness of the story" dictated the need to "exclude"[1] some of their activities. George Clooney, the film's director, is likewise constrained by the medium of filmmaking and can only tell so much of the story. The historical events behind this film are fascinating and if you want to dig into the real story take a look at the book Edsel is indebted to, the more scholarly work The Rape of Europa: The Fate of Europe's Treasures in the Third Reich and the Second World War by Lynn H. Nicholas.[2]

While the 345 men and women in the ranks of the Monuments, Fine Arts and Archives Section were spread out over Europe and didn't generally work together, for the purposes of filmic storytelling George Clooney follows Edsel's lead and focuses on a platoon of men who worked closely together. This means the history of what happened becomes the backdrop for an old-fashioned war movie where historical persons and events are woven into the narrative. Edsel himself explains that in writing the book he, "[took] the liberty of creating dialogue for continuity."[3] This moves both the book and the film a step away from hard history to historical drama. Still, it’s important to remember the platoon is loosely based on actual artists, architects, scholars, and historians recruited by the military.[4]

Over the years there have been thousands of World War II movies, mini-series and television shows. These range from highly realistic films like Steven Speilberg's Saving Private Ryan to screwball comedy TV shows like Hogan's Heroes (1965–1971). Clooney's The Monuments Men falls somewhere between these two extremes although definitely more on the lighter spectrum. The Nazi officers in Monuments Men have more in common with Speilberg's Nazi officers in Raiders of the Lost Ark than they do with his Nazi officers in Schindler's List. There are moments in The Monuments Men where Clooney seems to want to get serious, but one of the film’s failings is its lack of consistent tone. Sometimes it doesn't know what it wants to be.

In a recent interview Clooney outlined some of the challenges he faced achieving the tone he was looking for: “It’s been a bit of a dance, we’re trying to do the movie in the vein of war films, but you don’t want it to sound like The Great Escape. Those movies that were done in the ‘50s and ‘60s, they all had their own sort of life. You don’t want to do a replica; you have to do a new version."

Clooney added: “We’re testing it – we put some laughs in there, that’s important to me, but it’s a serious subject matter.”

He continued to ask the question, “How much is too much? The tone is lighter [to start], then they get in trouble. Gone With the Wind works in that way.”[5] Clearly striking the right balance was hard to achieve and in the end the film falls short of Clooney's goal.

The serious question the film asks, and the underlying idea it works to investigate, is whether it is worth shedding blood to save art, monuments and other culturally significant structures and artifacts? Should men die to preserve these things? Is protecting a piece of art worth a life?

The film focuses on two works of art: Jan van Eyck's Ghent Altarpiece and Michelangelo's The Madonna of Bruges. The first contains the familiar image of Christ as the Lamb of God in paradise; the second is a sculpture of the Virgin Mary with the Christ Child. Throughout the film the Monuments Men show a willingness to die for these particular pieces of art. There is a sense of a real threat in the Nazi’s actions that the wiping out of these works, or gaining control of them, would jeopardize the original intention of the artists and their works thereby threatening Christianity and the message of Christ in the world as conveyed though art. While this is not explicit in the story, it is a strong subtext and will be in the mind of Christian viewers. In fact, the film’s first scene shows Roman Catholic priests crating up the various panels of the Ghent Altarpiece so that they can be moved to what the priests hope will be safety.

Near the end of the film a brief scene shows the return of an ornate Jewish Torah scroll. The scroll contains the promises of God to His people—beginning with Adam and Eve—that a Saviour would come to rescue them.[6] Adam and Eve and the One promised, Christ Jesus, the very Lamb of God,[7] are all depicted on The Ghent Altarpiece which you can see today at Saint Bavo Cathedral in Ghent, Belgium because of the work of the Monuments, Fine Arts and Archives Section unit. Even now there is a concerted effort to protect this great work of Christian art for future generations.[8]

In the book of Proverbs King Solomon provides this advice: "Do not move the ancient landmark that your fathers have set."[9] Historically, and as the film shows, the Nazis systematically ignored Scripture. One scene in the film shows a scale model for Hitler’s vanity project The Führermuseum designed to house many of the great works of artstolen by the Nazis. As a result, The Monuments Men ends up being a kind of “heist movie” where one group steals and another group attempts to stop the theft and/or retrieve the stolen goods. For Christian viewers this drops squarely in the lap of the seventh commandment: “You shall not steal.” On one hand you have the Nazis taking their neighbour’s gold (sometimes in the form of gold fillings extracted from the mouths of Jewish men, women and children) and their neighbour’s possessions in the form of great works of art, while on the other hand the Monuments Men seek to help their neighbours by protecting their possessions and returning works of art to their rightful owners. The Nazis were not just stealing from the Jewish people they were stealing from everyone they had under their boots. While to them there was nothing dishonest about their plunder, to the rest of the world this theft was one of the horrors of war. The Nazis were engaged in a systematic reshaping of Europe. If they had succeeded, Europe and then the whole world would have found themselves with an indistinguishable history and the Nazis would have accomplished the very thing King Solomon in the book of Proverbs had warned his sons to avoid.[10]

When the dust settles The Monuments Men arrives at the conclusion that it was all worth it and future generations will have benefited from their efforts to protect and save these works of art. If a light-hearted film is something you find appealing then The Monuments Men will provide a good time. If something more serious on the topic is desirable then this won't do the trick. Many find the light-hearted approach to World War II frustrating especially when they have a personal connection to the war. For this reason viewers are cautioned that the film is sentimental and presents a romantic view of the Monuments, Fine Arts and Archives Section unit’s activities. Their actual work would have been far less glamorous. Consider The Monuments Men a doorway into an interesting chapter in art history and World War II history. The Monuments Men raises the question of why people go to fight and somewhere in the sentimentality of the film the answer given is that the fight waged in World War II was not just for freedom in the abstract, but for all the things that make life worth living.

[2]The Rape of Europa: The Fate of Europe's Treasures in the Third Reich and the Second World War by Lynn H. Nicholas

[7]John 1:29 "The next day [John the Baptizer] saw Jesus coming toward him, and said, “Behold, the Lamb of God, who takes away the sin of the world!"

[10] The theft of these great works of art, which were regularly associated with specific places and regions and nationalities aided in the Nazis goal of stealing the very land that they rested on. The Art itself acted as a kind of landmarked in the minds of the local inhabitants. It's not just a Madonna and child by Michelangelo, by World War II it's "The Madonna of Bruges." In Holy Scripture God is not favorable to those who partake in this kind of theft, Hosea 5:10 records this warning, "The princes of Judah have become like those who move the landmark; upon them I will pour out my wrath like water."