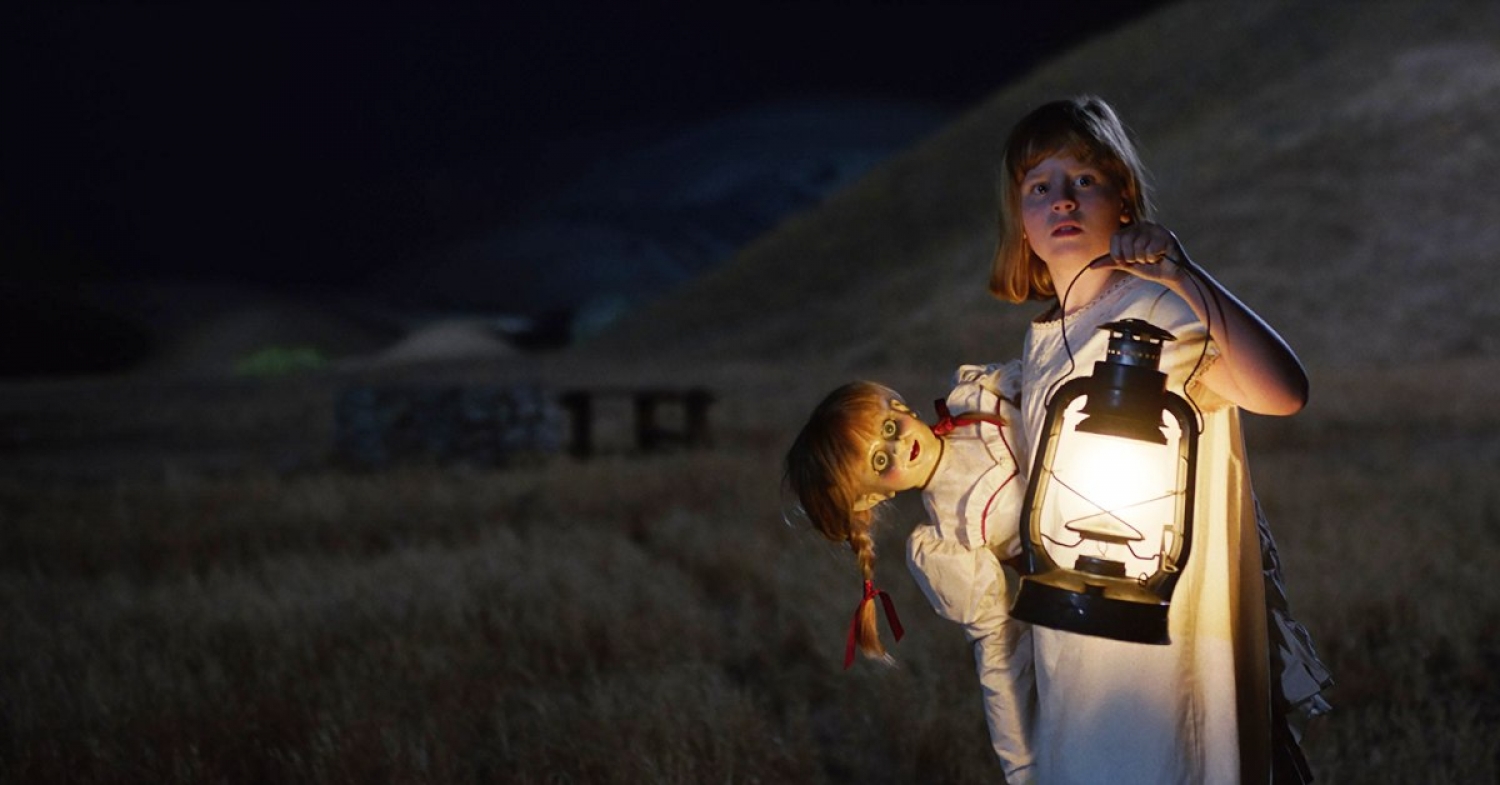 Annabelle: Creation (2017) directed by David F. Sandberg is the follow-up to Annabelle (2014). These fictional stories are based on an allegedly haunted Raggedy Ann doll kept by paranormal researcher Lorraine Warren and her late husband Ed in a museum of occult curiosities. Although the Annabelle doll featured in the film is sometimes portrayed as a Raggedy Ann doll, more often it is depicted as a distressed porcelain doll first introduced in the film The Conjuring (2013). This makes Annabelle (2014) a kind of prequel and Annabelle: Creation (2017) a pre-prequel and an origin story.

The story begins in 1943 when a mother, Esther Mullins (Miranda Otto), and father, Samuel (Anthony LaPaglia) lose their daughter, Annabelle/Bee (Samara Lee), after she’s run over as Samuel changes a flat tire after church. He is a doll maker and at the beginning of the film is shown in his studio crafting the porcelain doll that will later be part of the story’s unfolding horror. Twelve years later, in 1955, the film continues with the arrival of orphan girls and a nun, Sister Charlotte (Stephanie Sigman). The Mullins’, who are Roman Catholics, have invited them to live in their home which they have opened as an orphanage as penance for past sins. However, in the twelve intervening years the house and property have transformed from being warm and well kept to being ragged and rough. Esther Mullins is now a bedridden invalid cared for exclusively by her husband; she is shut away from their new guests.

Much of the movie centres on the orphans and Sister Charlotte becoming acquainted with their new home and running up against “things that go bump in the night.” At first, they don’t know about the Mullins family tragedy. The mystery as to why the house is plagued by the dead child’s “ghost” and her now extremely creepy doll is revealed when Esther explains to the nun that as distraught parents they had prayed (not to God but to whoever would listen) for contact with their dead daughter. This was “granted” to them but eventually their fleeting moments of contact became sinister as the child’s “ghost” asked permission to live in the doll. It soon became apparent it wasn’t really their daughter they had been interacting with but rather a violent demon. Thinking they had solved the problem with the help of some Roman Catholic priests, the Mullins tried to carry on with their lives. They had boxed up porcelain doll in a closet in their daughter’s old room and papered the walls with pages from Bibles to keep the evil inside. This plan had mostly worked until one of the orphans, the crippled, put-upon Janice (Talitha Bateman), is coaxed by the ghost to unlock the closet door and let out the doll/demon. What follows? Demonic harassment, peril, possession, screaming, running etc. The film eventually skips forward another twelve years dovetailing into Annabelle (2014) the movie for which it is the prequel.

Why is this topic interesting to audiences? Christians and non-Christians alike are interested in stories of “ghosts” because death and grief are part of life and some people in times of grief claim to see (or see what they believe to be) dead relatives. The Lutheran Confessions, which are a good and right exposition of Scripture, explain that when people see the dead what they are actually seeing are evil spirits parading, masquerading as the deceased.[1] The fact that the film addresses this is what makes it worth talking about even if the story is outlandish and over-the-top. When this truth about “ghosts” is pointed out it’s often not easily accepted as a grieving person dislikes hearing that the sweet moment they experienced with their loved one isn’t what they believed it to be. On the other hand, these sweet moments can quickly, or eventually, turn into fearful and horribly distressing experiences. They can also be temptations to put faith, trust, and hope in unscriptural things and not in Christ Jesus and His promises.

Christians can take comfort in the fact that a loved one who dies with their faith in Christ is now with Him. Jesus promises, “I go and prepare a place for you, I will come again and will take you to Myself, that where I am you may be also” (John 14:3). Further to that, St. Paul encourages Christians when he writes, “Set your minds on things that are above, not on things that are on earth. For you have died, and your life is hidden with Christ in God. When Christ who is your life appears, then you also will appear with Him in glory” (Colossians 3:2-4). This is an admonition towards the Last Day and the resurrection of the dead which Christians confess in the Apostles’ Creed. Also, as to the idea of ghosts haunting the living, Scripture teaches, “For the living know that they will die, but the dead know nothing, and they have no more reward, for the memory of them is forgotten. Their love and their hate and their envy have already perished, and forever they have no more share in all that is done under the sun” (Ecclesiastes 9:5-6). Again, for ghost enthusiasts this is not always easy to accept because it contradicts the popular narrative presented in society. For all its goofiness and mildly manipulative chills and thrills at its core Annabelle: Creation (2017) says that the dead don’t actually interact with the living as ghosts and if anything is happening it is demonic.

Will there be more Annabelle films? With a small budget of $15 million and an opening weekend box office of more than $35 million, it’s safe to say the franchises’ profitability will spawn more films. As always it is not recommended to adopt what this film splashes on the screen as gospel truth; almost everything is nonsense or complete sensationalist baloney. It is however recommended to bring knowledge of Scripture and a strong confession of faith in Christ to whatever is watched; where it aligns with the truth of Scripture take note. Lastly, remember that the true exorcist is Christ Jesus Himself; in the midst of trouble, turn to Him and His Church.