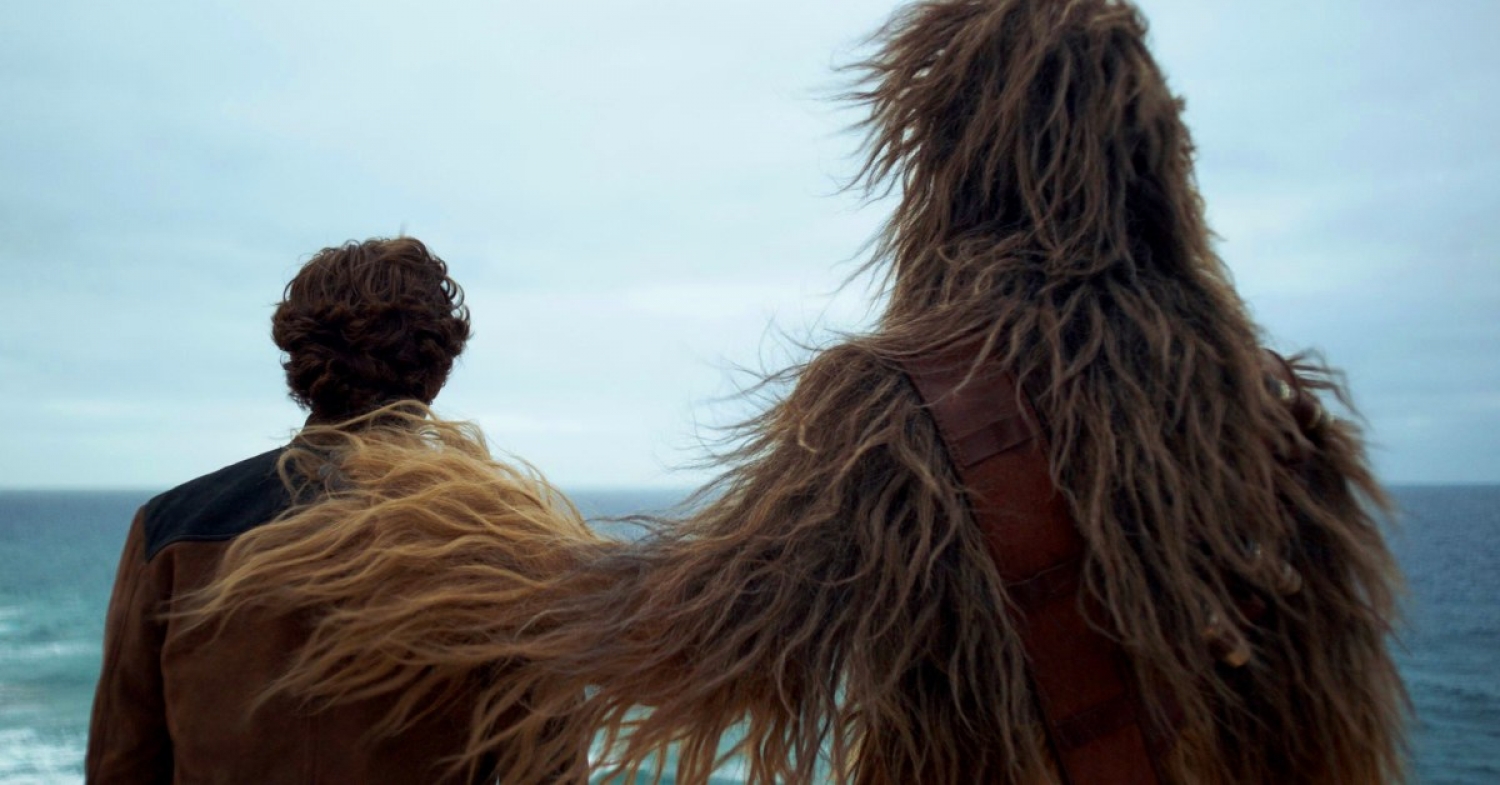 Plagued by constant reports of trouble on set under the film’s original directors Phil Lord and Chris Miller, rumours of actor Alden Ehrenreich’s struggle to nail a convincing Han Solo, and a mounting backlash within the Star Wars fan base following Rian Johnson’s The Last Jedi (2017), director Ron Howard had his work cut out for him as he completed Solo: A Star Wars Story. Howard is a technical director; he always gets the job done, yet his films often lack depth and take few risks. The big question is: Are viewers going to be satisfied with a safe Solo film or would they prefer something that takes more risks?

Howard’s film is above average with fun moments and certain aspects of the story, like the initial meeting of Han Solo and Chewbacca (Joonas Suotamo), are well crafted and enjoyable. The storyline chronicles how Solo and his new found friend Chewbacca becoming embroiled in a failed heist of coaxium – hyperdrive fuel. Life goes from bad to worse as they meet the man who contracted the heist, Dryden Vos (Paul Bettany), a sadistic midlevel crime syndicate boss who wants the coaxium for the black market. There are other interested parties like the masked marauder Enfys Nest (Erin Kellyman) whose reasons for wanting the coaxium are left uncertain until the end.

Where does this film fit into the expanding Star Wars canon?

Solo: A Star Wars Story is an origin story set roughly a decade before Star Wars: A New Hope (1977) detailing Han Solo’s entry into a life of intergalactic smuggling following his escape from the slums of the Imperial ship yards of Corellia where he lived under the influence of the “Fagin-esque” petty criminal Lady Proxima (Linda Hunt) who lives off the proceeds of her indentured street children. He’s also in love with his fellow Corellian street urchin Qi'ra (Emilia Clarke) who weaves in and out of his story.

Is Ehrenreich’s Han Solo a ‘carbonite’ copy of the irascible handsome loner made famous by Harrison Ford? No. This younger version is more agreeable, ambitious, optimistic, and lucky. However, like his future self, Ehrenreich’s Han Solo has a hard time keeping his mouth shut which causes him trouble wherever he goes including a brief stint in the Imperial Navy and Infantry. By the way, best know for his role in the Coen Brothers film Hail, Caesar! Ehrenreich’s performance as Solo is promising and better than expected.

The choice to make Solo’s character optimistic and eager is one of the film’s best parts. By the time audiences meet the charming scoundrel in A New Hope he’s jaded and cynical trusting more in simple tricks and nonsense than in people, luck, or any kind of destiny.

Sadly, Solo: A Star Wars Story doesn’t show Solo’s transition from ambitious optimist to grumpy pragmatist. The father/son writing team of Jonathan and Lawrence Kasdan take their time setting up the character arc but don’t fully move it anywhere in this film. There may be good and practical reasons for this. In an interview Ehrenreich let slip that he’s signed on for another two Star Wars films. This may give ample time to complete Solo’s character arc from hopeful rogue to a man whose experience leads him to “trust no one.” The cautious attitude comes from advice delivered by a world-weary smuggler, Tobias Beckett (Woody Harrelson) a kind of semi-disinterested mentor and it eventually helps mould Solo into the man who in A New Hope Princess Leia Organa (Carrie Fisher) describes by saying, “Your friend is quite a mercenary. I wonder if he really cares about anything... or anybody.” However, Solo’s love interest, Qi'ra, hints at the heart of gold that lies under Solo’s ever-hardening exterior when she says, “I may be the only one who knows what you really are… a good person.” Han denies this saying, “No, I'm not. I'm a terrible person,” to which Qi’ra replies, “You're the good guy.”

This is both great to hear but also something better left unsaid. It complicates one of Han Solo’s biggest moments in A New Hope. After blowing off Luke Skywalker’s (Mark Hamill) pleading for him to join the rebellion in their “suicidal” attack on the Death Star, he reverses his decision returning with the Millennium Falcon guns blazing at the last moment when all seems lost to help save the day encouraging Skywalker saying, “You're all clear, kid, now let's blow this thing and go home!” For new viewers watching the films in chronological order Qi’ra saying “you’re the good guy,” sets up an expectation that actually reduces the impact of Solo’s big surprise moment in A New Hope. On the other hand, this affirmation from Qi’ra sets things up for Solo’s big change of heart in A New Hope that makes his joining the rebellion less of a non-sequitur for the Han Solo character. For a film with an otherwise careful approach this may be the biggest risk the writer’s take with his character. It is a writing challenge to pen an earlier version of an iconic character, now played by a different actor that audiences will hopefully grow to love while making him less loveable in future instalments presumably leading up to A New Hope. The Kasdans, or other writers, will need to delve deeper into Solo’s character as he grows harder and more jaded with every failure so that when Han Solo crops up in the Mos Eisley Cantina on Tatooine he truly is at his lowest and really in dire need of redemption. If they can do that they will have pulled off a great character arc and if this is the direction the Kasdens are planning to go with Solo’s character, it will be interesting.

Another character with which Star Wars fans will be familiar is Lando Calrissian (Donald Glover) originally played by Billy Dee Williams and first introduced in Star Wars: The Empire Strikes Back (1980). In Solo: A Star Wars Story Calrissian get’s the short end of the social justice warrior stick as he is transformed from the suave ladies man into a pansexual who will hook up with anything: animal, vegetable, mineral … even droid. The droid in question is his equally social-justice-warrior influenced L3-37 (Phoebe Waller-Bridge) who is perhaps the film’s most grating and tone-deaf character. While there is a way in which the droid’s desire for droid emancipation could work in this film and tie into the defeat of the droids and their enslavement in Lucas’ prequel films, the Kasdens and Howard don’t take the time to make that connection. Rather, L3-37’s constant and often contextually inappropriate quips feel like a modern political imposition on a galaxy far, far away. By comparison the droid featured in Rogue One: A Star Wars Story (2016), K-2SO (Alan Tudyk), was equally gruff yet somehow a more lovable character and a more likely instigator of a droid rebellion than L3-37.

Christian viewers, especially parents with kids, will want to address these points and consider what it means to trust in something or someone. The Psalms encourage those who know the name of the LORD to “put their trust in [Him because He has] not forsaken those who seek [Him]” (Psalm 9:10). Viewers of Solo: A Star Wars Story will note that at no time does Han Solo come in contact with Jedi or the Force or is there any talk of the religion of the Force. This film focuses on the criminal elements of the Star Wars universe so parents with children may also want to take advantage of the opportunity it presents to talk with their kids about theft and the Christian expectation that they are not to take their neighbour’s money or possessions, or get them in any dishonest way, but help them to improve and protect their possessions and income. A good question to ask is whether Han Solo ultimately accomplishes this or not. Here’s another question: the various characters from Qi’ra, to Calrissian, to Enfys Nest, to Beckett and his crew all have their motivations and reasons for their criminal activity but do these reasons and motivations justify their actions basically do the end justify the means?

The strongest parts of the film deal with Chewbacca and Solo’s growing friendship. If Solo can trust anyone it seems to be Chewie and this is a good thing. However, after letting the film sink in it’s obvious Solo: A Star Wars Story is a rather safe film following a generic blockbuster formula taking fewer risks than the characters in the film’s plot. A film with a lead character who cannot die because he’s alive in future films should come across a lot more perilous like Mad Max: Fury Road (2015) and a lot less plodding like Howard’s film Inferno (2016). As a result, while the film has charming and fun moments it will likely come across as a little flat on future viewings. It’s the kind of film that works best if the audience avoids thinking about it too much and simply sits back with their popcorn to enjoy it for what it is: a rather straightforward double-crossing heist film set in the Star Wars universe introducing some beloved characters in a safe, wide-appeal kind of way.

Making films like this is really tricky: fans don’t want to see their beloved characters mistreated (as Luke Skywalker was in The Last Jedi) tarnishing what came before, and they don’t want them to be lackluster, or overshadowed in an attempt to “out-Han-Solo” Han Solo. This is a kind of goldilocks proposition with each viewer deciding if it’s too hot, too cold or just right.