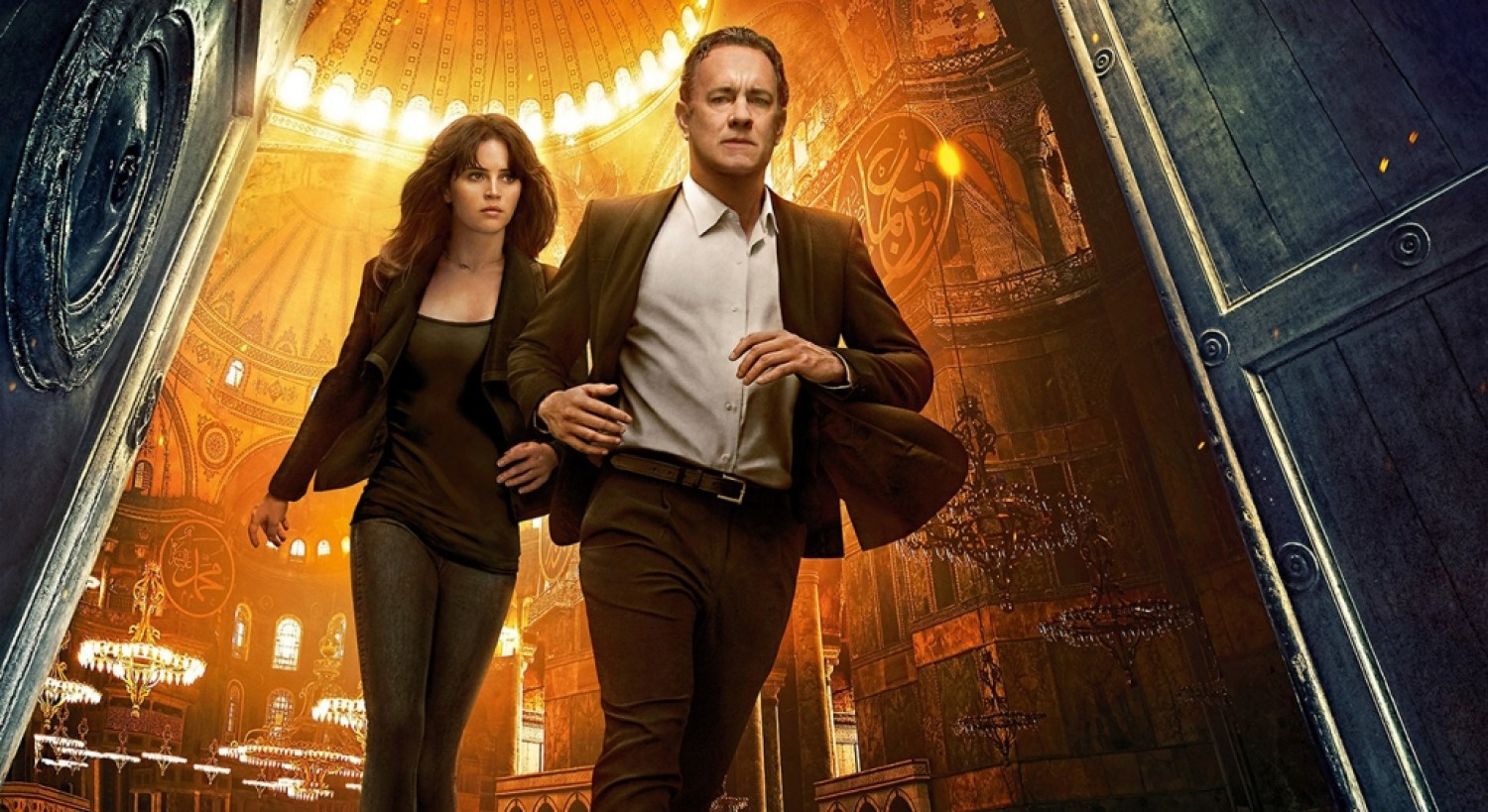 A fearsome piece of fluff

In 1798 Church of England priest Thomas Robert Malthus wrote An Essay on the Principle of Population speculating that the world would run out of food as the population increased exponentially beyond the capacity of agricultural production. In the last century this fear was popularized again in a 1968 book The Population Bomb by Stanford University professor Paul R. Ehrlich. Pop author Dan Brown's book Inferno, now a film directed by Ron Howard starring Tom Hanks and Felicity Jones, capitalizes on this idea making it the driving force behind his mystery thriller.

Inferno is the third in a series of films adapted by Ron Howard from Dan Brown’s books. As in The DaVinci Code (2006) and Angels and Demons (2009) university professor and symbologist Robert Langdon (Hanks) must solve a series of puzzles using famous works of art and obscure symbols to save the day. Half travelogue the film has Langdon rushing from the picturesque Italian cities of Florence and Venice to historic sites like Hagia Sophia in Istanbul, Turkey trying to beat the clock before a biological catastrophe is released on an unsuspecting global population.

Billionaire biologist Bertrand Zobrist (Ben Foster) sets the stage by engineering a virus that upon release will wipe out half the world's population. Using an altered version of the renaissance artist Sandro Botticelli's Map of Hell (1495) and the classic Dante's Inferno, part one of Dante's epic poem Divine Comedy (1307), Langdon must find where the Inferno virus is being hidden from the World Health Organization who wants to stop its release. However, to ensure the virus is released, Zobrist has set up this trail of clues as a contingency plan should he die, which he does at the beginning of the film. He believes Langdon will pull the lever and save the world by reducing the population before overpopulation causes the extinction of all humanity. Will Langdon do it? How did he get mixed up in this mystery in the first place? These are the questions viewers are encouraged to ask as the film unfolds.

Langdon also needs answers. The film opens with him in a hospital bed in Florence, Italy recovering from brain trauma which has left him with temporary amnesia and jumbled hallucinatory visions of Dante and Botticelli's depictions of hell mixed up with detail from the days leading up to his injury. Foiling an assassination attempt on Langdon at the hospital, Dr. Sienna Brooks (Jones), a lifelong fan of Langdon's work, becomes embroiled in the dangerous plot; but can she be trusted? Can anyone be trusted?

Here's another question? Is this yarn worth the price of admission?

For those looking for some escapist fun and eye-popping cinematography of gorgeous Mediterranean locations it certainly is. As for the plot, the mystery is a little overcomplicated in its twists and turns, and a too far-fetched to be believable. Setting all that aside there is something else to consider. All of Dan Brown’s books and their film adaptations are mysteries built on fear: The Da Vinci Code, for example, is built on the fear that the Bible is wrong about Jesus and people have been lied to for centuries; in Angels and Demons the fear is that science might trump the Bible when it comes to the origins of life and that science and faith are contradictory and locked in perpetual conflict. Inferno is built on the fear that overpopulation will bring about the demise of humanity. Note that all these fears have something in common: they have been fed to the baby boomer crowd and are being passed down to a new generation through popular culture and the universities of North America. It only makes sense that Dan Brown, a baby boomer, would use the fears of his generation to fuel the intrigue of his mystery novels. Like they say, write what you know. There is one extra thing to consider: at the heart of each of these fears is the possibility of being wrong and believing the wrong thing. This is another element Brown’s works share. In Inferno Langdon must figure out what he will do? Will he do the right thing? Is there even a right thing to do?

Dan Brown’s books and Ron Howard's film adaptations have agitated Christians because they have been considered pot-shots at the Christian faith. Is this the case with Inferno? This time around, at least on the surface, the Christian faith appears to play a much smaller role. For instance, in Inferno hell and depictions of hell are used metaphorically not literally; the idea being that if, on the one hand, humanity was to suffer extinction through overpopulation the resulting world would be a "hell on earth" full of starvation and brutality. On the other hand, if half the world died in a plague-like virus that could also be a "hell on earth" full of sickness and misery. Not present in the film is any real fear of an actual hell in which eternal separation from God could eventually be suffered because of unrepentant sin.

After the film’s first act the emphasis on visions of hell are supplanted by the convoluted cloak and dagger plot with its many betrayals and backstabbing twists and turns. Does this mean the Christian faith is off Dan Brown's hook? Not really. There seems to be a general underlying premise that is still worth thinking about and for which Christians can provide a response. While there are Christian things in the film, like baptismal fonts and churches, they are just part of the scenery. Christianity, as far as the plot is concerned, has no answers so it is never really considered or consulted in Langdon's race to beat the clock.

With no fear of a literal hell and a Judgment Day to come and no hope in the love of a God who is "gracious and merciful slow to anger and abounding in steadfast love,” (Psalm 86) the fear at the centre of Inferno is a materialist fear. Basically, if this world is all humanity has and there's "no hell below us [and] above us only sky," (John Lennon) would there be anything worth living for should the world become a truly horrible place to live by today's modern standards? Imagine if it all turns out horrible? What then? This materialist dystopian fear is nothing new in Hollywood and Christian viewers who find the premise unsettling need not fear the way the world fears when such a premise is presented.

Why not? Isn't the prospect of a pitiful and shortened life worth a little bit of fear? In the Lord's Prayer Christians pray to God the Father, "Give us this day our daily bread." This is a prayer spoken in both adversity and abundance. Christians pray to God for all things that support the body "such as food, drink, clothing, shoes, house, home, land, animals, money, goods, a devout husband or wife, devout children, devout workers, devout and faithful rulers, good government, good weather, peace, health, self-control, good reputation, good friends, faithful neighbours, and the like."[1] Therefore, Christians need not fear times of trouble but rather can remember what God promises in Psalm 50 when He says, "Call upon Me in the day of trouble; I will deliver you, and you shall glorify Me” (Psalm 50:15). Future catastrophes then become opportunities to trust God and love our neighbour.

If half the world's population died what would Christians be called to do? Preach Christ, bury the dead and care for the survivors and their physical needs—essentially lead a virtuous God-pleasing life regardless of the circumstances. Is there then an even deeper underlying fear in Inferno of failing to be virtuous in a time of trial and temptation? Perhaps. But this again needs not be a fear for Christians who, even in the face of deaths ignoble or honourable, also pray in the Lord's Prayer, "Deliver us from evil," —a prayer for a blessed end "when our last hour comes, and [for God to] graciously take us from this valley of sorrow to Himself in heaven."[2] Thus, there is no need for the baptised Christian to fear even death because of a potential dystopian future, and as unpleasant as such a future might become, nothing in such a scenario can separate the Christian from the love of God in Christ Jesus (Romans 8:39). Having this sort of attitude toward life today and life in the future and remembering that Christ promises to gather His own unto Himself at the hour of their death takes the wind out of the sails of this sort of thriller.

One standout performance in the film comes from Irrfan Khan who plays Harry Sims a sort of bureaucrat/fixer-for-hire who isn't afraid to get his hands dirty in the service of his rich anonymous clients. He shows up at just the right point to keep some fun and excitement in a film which could easily become tedious without solid performances like his. Equally good is Felicity Jones who will be starring in the upcoming Rogue One: A Star Wars Story (2016), and who holds her own alongside Tom Hanks and makes Inferno watchable if not memorable.

Overall Inferno will not be in the top 10 of Tom Hank's best most-loved films. Viewers looking for a great Tom Hanks film should check out his recent film Sully (2016). Inferno is entertaining in the moment but not the sort of film most people will want to revisit in years to come.