More / Book of the Month / Star Wars - Original Trilogy (1977-1983) Honour Your Father? Thoughts on the 4th Commandment and Star Wars 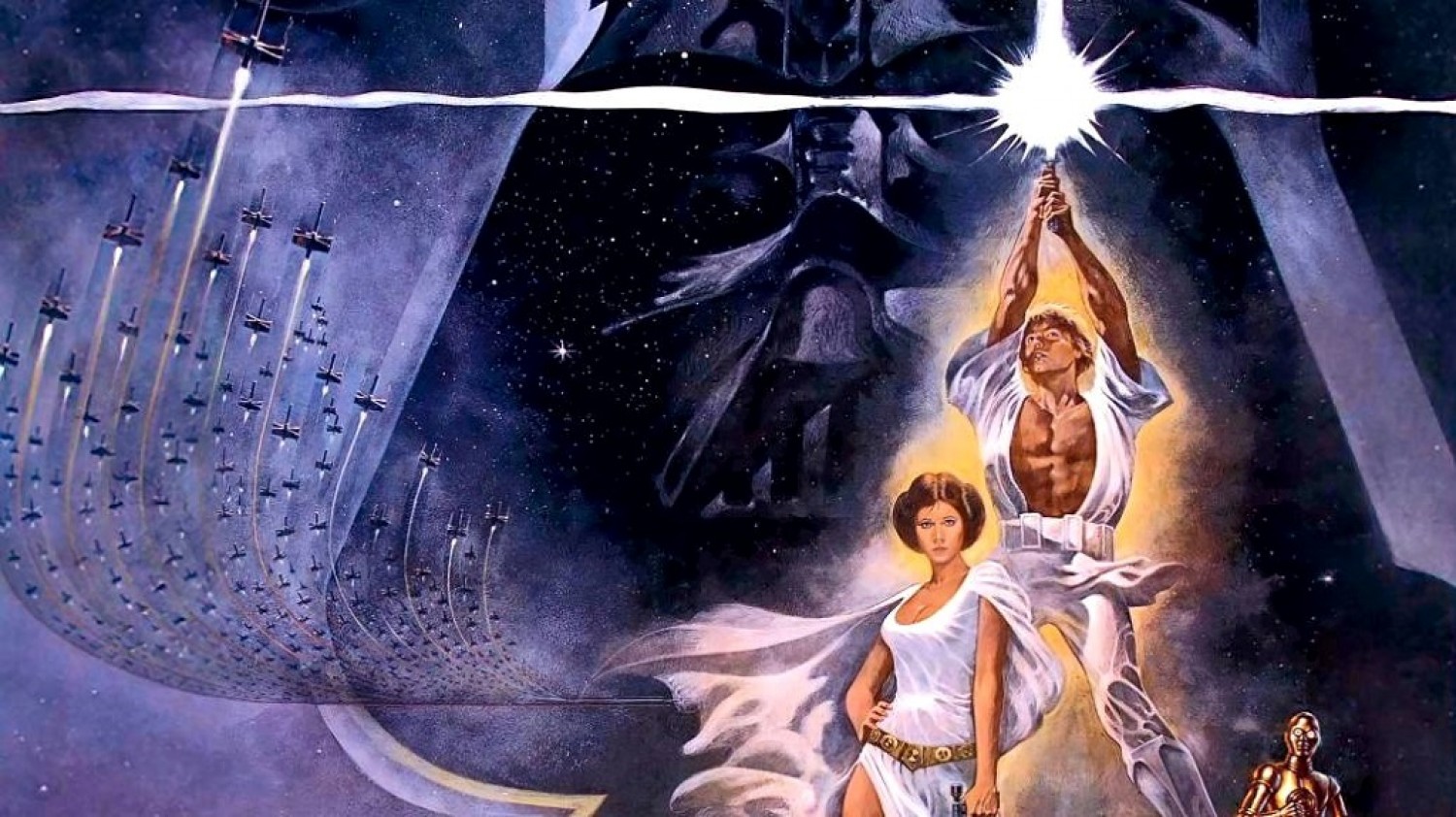 Listen here for audio of radio interviews about films from a Christian perspective with Pastors Ted Giese and Todd Wilken on IssuesEtc.org where Christianity meets culture. (Click here for a spoiler free review of Episode VII Star Wars The Force Awakens)

The Fourth and the Force

At this point writing anything about Star Wars is like adding a drop of water into the ocean. Nevertheless, in preparation for Star Wars: The Force Awakens (Episode VII) a look at the previous films—particularly the original three A New Hope (1977), The Empire Strikes Back (1980), and Return of the Jedi (1983)—from the vantage point of Luther's Small Catechism's the Fourth Commandment may provide opportunity for Christian reflection on this ongoing pop phenomenon.

The Fourth Commandment
Honour your father and your mother.
What does this mean? We should fear and love God so that we do not despise or anger our parents and other authorities, but honour them, serve and obey them, love and cherish them.

Luke Skywalker, "The Force runs strong in my family. My father has it. I have it. And... my sister has it."

At the heart of the Star Wars saga is a family—a broken, troubled family in need of redemption. The first film, A New Hope, introduces viewers to Darth Vader (James Earl Jones/David Prowse) the family’s dark father, Luke Skywalker (Mark Hamill) the son, and Princess Leia Organa (Carrie Fisher) the sister. In 1977 no one knew this was a family. The Sith Lord Darth Vader was an intergalactic overlord and Imperial ruler, Luke Skywalker was an orphaned moisture farmer living with his aunt Beru and uncle Owen on the desert planet of Tatooine, and Leia Organa was a princess from the doomed plant of Alderaan and member of the rebel alliance and in Vader’s eyes a traitor against the Empire. In the second film, The Empire Strikes Back, one of its biggest reveals happened when Vader confessed to Luke that he is Luke's father. Then in the third film, Return of the Jedi, viewers are finally told Luke and Leia are twins.

The prequel films—The Phantom Menace (1999), Attack of the Clones (2002), and The Revenge of The Sith (2005)—somewhat unsuccessfully and awkwardly attempt to tell, in part, the back story of Vader/Anakin Skywalker (Jake Lloyd, Hayden Christensen) and his relationship with Luke and Leia's mother Queen/Senator Padme Amidala (Natalie Portman).

To be fair, this tragic and troubled family operates without knowledge of their familial relationship through much of the original three film's story, which leads to awkward moments like Luke and Leia's kiss in The Empire Strikes Back. Viewers are left to wonder what happened in the past that left this family so broken? Why don't they know each other? Why, in the original three films, did the Jedi Masters Obi-Wan Kenobi (Sir Alec Guinness) and Yoda (Frank Oz) lie and/or withhold valuable information from Luke and Leia about their parentage and relationship? On one hand, from a story-writing perspective, it makes for a stronger dramatic narrative; on the other hand, it sets up the story as a middle story or an ongoing story. The reality is that in 1977 writer/director George Lucas likely didn't have the whole story worked out yet.

Regardless, part of the original trilogy’s success was Lucas' ability to shroud the past in mystery. For instance, the orphan Luke in A New Hope has a father who his uncle says was a navigator on a spice freighter. After hearing the "truth" from Obi-Wan Kenobi, that his father was a Clone War hero, the orphan Luke’s opinion changes and he is ready to leave his home planet and follow in this "new" father's footsteps, asserting, "I want to learn the ways of the Force and become a Jedi like my father." This continual seeking of the past drives Luke and Leia's characters. Luke wants to be like his father who, as Obi-Wan Kenobi tells it, was betrayed and murdered by his young Jedi Knight apprentice named Darth Vader, and Leia wants to overthrow Lord Vader and the Empire and return to the previous political system of the Old Republic. Both Luke and Leia's desires send them on a collision course with the man they do not yet know is their real father.

Obi-Wan Kenobi, "Your father's light saber. This is the weapon of a Jedi Knight. Not as clumsy or random as a blaster; an elegant weapon for a more civilized age. For over a thousand generations, the Jedi Knights were the guardians of peace and justice in the Old Republic. Before the dark times... before the Empire."

For viewers familiar with Luther's Small Catechism thoughts of the Fourth Commandment and its interaction with the story come into greater focus with knowledge that Darth Vader is Luke and Leia's father. Likewise, Christian viewers may recall what St. Paul writes in his epistle to the Ephesians: "Children, obey your parents in the Lord, for this is right. ‘Honour your father and mother’ (this is the first commandment with a promise), ‘that it may go well with you and that you may live long in the land.’ Fathers, do not provoke your children to anger, but bring them up in the discipline and instruction of the Lord."[1]

Christian viewers might want to ask how one honours a father when he turns out to be a villain? At first neither Luke or Leia love and cherish their father, and as part of the rebel alliance they both actively anger him with their attempts to overthrow the Empire. To varying degrees, it's safe to say, they despise Vader. When Luke discovers and accepts the truth that Darth Vader is his true father he becomes an excellent example of the earnest desire to keep the Fourth Commandment. In Return of the Jedi when asked by Leia why he feels as though he must confront Vader, Luke responds, "Because, there is good in him. I've felt it. He won't turn me over to the Emperor. I can save him. I can turn him back to the good side. I have to try."

Again, how does one honour a father who turns out to be a villain? By seeking his redemption; by being patient and kind; by working towards drawing him back from the evil path (the dark side of the Force) to the honourable and virtuous true path (the good side of the Force, the path of the Jedi). Luke goes to his final confrontation with his father hoping to draw him back to the role of being a guardian of peace and justice in a New Republic. The dramatic tension of Return of the Jedi is situated in Vader's continued desire to have Luke join him on the Dark Side so that together they can rule the galaxy as father and son. Yoda had warned Luke to beware of the dark side, "anger, fear, aggression; the dark side of the Force are they. Easily they flow, quick to join you in a fight. If once you start down the dark path, forever will it dominate your destiny, consume you it will, as it did Obi-Wan’s apprentice.” Christian viewers will want to consider Paul's warning, "Fathers, do not provoke your children to anger, but bring them up in the discipline and instruction of the Lord." Elsewhere in his letter to the Colossians Paul also writes, "Fathers, do not provoke your children, lest they become discouraged."[2]

If Luke becomes the model of keeping the Fourth Commandment, Vader as the dark father in the saga is the flipside. In Return of the Jedi Luke is unwilling to fight his father hoping to reason with him, and under the watchful eye of the evil Emperor (Ian McDiarmid), the son says to his father, “I will not fight you." Vader, using the Force, probes his son’s thoughts and feelings and exclaims, “Sister! So ...you have a twin sister. Your feelings have now betrayed her too. Obi-Wan was wise to hide her from me. Now his failure is complete. If you will not turn to the Dark Side, then perhaps she will."

All of this was an attempt to provoke Luke into fighting with him, hoping that in the heat of the battle anger would take hold and Luke could then be turned to the dark side. Luke loses his composure and they fight, but when Luke prevails and cuts off his father’s hand (just as his father had done to him in The Empire Strikes Back) Luke relents and shows his father mercy. Again the Fourth Commandment is at play. Luke ultimately loves and cherishes Vader and even serves his father by sparing his life.

As for Vader, when moments later Luke's life is threatened by the Emperor he returns the favour to his son sacrificing himself to save Luke from certain death. Whatever impulse to do good was left in Vader—who Obi-Wan Kenobi describes as being "more machine now than man. Twisted and evil,"—is enlivened as he sees his son suffer under the Emperor’s hand. By turning against the Emperor, his master, it’s clear Vader's redemption was at hand. Within the context of the Star Wars story this moment was the turning point and Vader was redeemed by the love of his son and his fatherly love for his son.

To drive the point home in his dying moments Vader says to his son, "Luke... help me take this mask off." Luke responds, "But you'll die." To which Vader replies, "Nothing... can stop that now. Just for once... let me... look at you with my own eyes."

After removing Vader's iconic mask, father says to son, "Now... go, my son. Leave me." Not willing to abandon his gravely injured father Luke says, "No. You're coming with me. I'll not leave you here, I've got to save you." To which the dying Vader replies with his last words, "You already... have, Luke. You were right. You were right about me. Tell your sister... you were right."

At the film’s end, during the celebration of the Rebel Alliance's victory over the Empire a ghostly Force apparition of Vader/Anakin Skywalker and the Jedi Masters Obi-Wan Kenobi and Yoda appear to Luke confirming his father’s redemption. Then a happy Leia brings her brother back to the party. In the midst of Vader's sacrificial death, the Skywalker family is mended and so ends the original trilogy.

Luke Skywalker, "The Force runs strong in my family. My father has it. I have it. And... my sister has it ... and you have it."

In one of the TV trailers for the new Star Wars film The Force Awakens text appears across the screen reading, "every generation ... has a story." Another trailer includes Leia, and Luke Skywalker’s voice informs viewers that this new film continues the family saga. Is their father part of the new film? The official trailer shows Darth Vader’s misshapen, broken helmet making it clear that in The Force Awakens the past life of the dead Darth Vader is part of the new story. In all these trailers a question emerges: Who is the new family member who has the Force? That remains to be revealed, but it appears that “family” is part of the new Star Wars films, as it was in the original films. So as The Force Awakens (Episode VII), helmed by writer/ director J. J. Abrams, rolls into theatres December 18th, keep in mind the Fourth Commandment and the force of family.