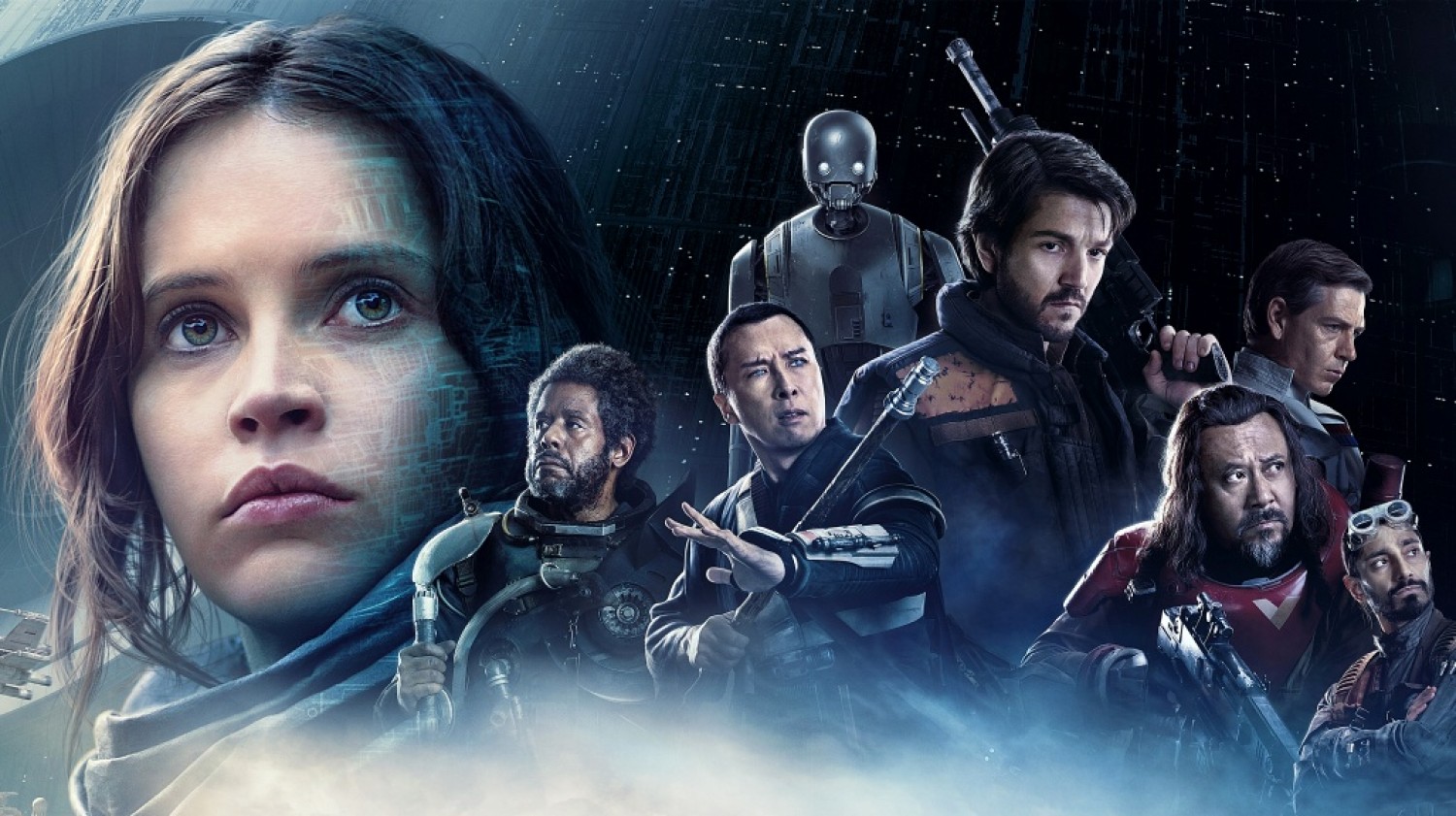 Rogue One: A Star Wars Story (2016) Directed by: Gareth Edwards

Rogue One — a new force in the Star Wars franchise

With Rogue One: A Star Wars Story director Gareth Edwards goes back to that galaxy far, far, away that kids and adults fell in love with long, long, ago in 1977. Kids and adults have been falling in love with the iconic franchise ever since and while not every film in the series has measured up to that first Star Wars film, now called Episode IV: A New Hope (1977), or to its sequel Episode V: The Empire Strikes Back (1980), with Rogue One: A Star Wars Story Edwards takes his personal crack at measuring up to the films he loved so much growing up. The Star Wars franchise has now entered the stage where directors like J.J. Abrams, director of last year’s Episode VII: The Force Awakens, and Edwards, who grew up enthralled by Star Wars, are making their own Star Wars films and Edwards' love of the fictional world is evident in Rogue One: A Star Wars Story.

This new film is another prequel but, unlike the George Lucas' prequels, Edwards’ film focuses on events leading up to opening scene of the original Star Wars film A New Hope (Episode IV) where Darth Vader (voiced by James Earl Jones) boards Princess Leia's (Carrie Fisher) Rebel blockade runner in search of the Empire’s stolen data plans. A brief synopsis of Rogue One is found in the introductory crawl of the 1977 film: "It is a period of civil war. Rebel spaceships, striking from a hidden base, have won their first victory against the evil Galactic Empire. During the battle, rebel spies managed to steal secret plans to the Empire’s ultimate weapon, the DEATH STAR, an armoured space station with enough power to destroy an entire planet." For years Star Wars fans wondered, which hidden base? Where did the battle take place and what was that battle like? Who were the rebel spies? Rogue One answers these questions and more.

The “hidden base” for the rebel alliance in Rogue One is the same one revealed at the end of the original Star Wars film: the jungle-covered moon of Yavin 4. The “battle” mentioned in the opening crawl takes place amidst the archipelagos of a planet new to the Star Wars universe called Scarif. The “rebel spies” are headed up by an intelligence officer Captain Cassian Andor (Diego Luna) and a rebel recruit, small-time criminal, Jyn Erso (Felicity Jones).

The film is really Jyn Erso's story. She is the daughter of Galen Erso (Mads Mikkelsen) an Imperial defector and science officer who is captured by the Empire in the film’s opening scenes and forced to continue his work on the Death Star project by an ambitious Imperial officer Orson Krennic (Ben Mendelsohn). As a child Jyn Erso evades the detection of Krennic's troops and the story picks up with her being pressed into service with the rebellion because of her father and her connections with a fanatical lone-wolf rebel Saw Gerrera (Forest Whitaker), a character introduced in the animated TV series Star Wars: The Clone Wars (2008 - 2015).

The film addresses one of the major plot holes of the original 1977 film: Why would the Empire build the Death Star with a fatal flaw, an Achilles heel? The answer? Careful, deliberate, covert sabotage from within! In the trailer for Rogue One Erso's father tells his little girl, “Whatever I do, I do it to protect you. Do you understand?” She answers, “I understand.” Since Galen Erso wants a better universe for his daughter he plots his revenge by building the fatal flaw into the heart of the Death Star. Despite plugging this massive plot hole, Rogue One is not without its weak points. In the days and years to come hardcore Star Wars geeks will comb over every detail to point out these weaknesses.

Christian viewers will want to take notice of the character Chirrut Îmwe (Donnie Yen) a blind non-Jedi warrior-monk who served as a guardian of the Jedi temple on the planet of Jedha and who ends up alongside Andor and Erso as part of the rag-tag rebels. The character, while not a Jedi, provides a picture of what a faithful believer in The Force looks like. He is often shown praying, "I'm one with The Force. The Force is with me." This mantra is referred to as a "prayer" by the protector of Îmwe, a fellow temple guardian, Baze Malbus (Wen Jiang).

Previous Star Wars films have not portrayed devotion to The Force in terms of spoken prayers. Jedi are shown silently meditating, like Qui Gon Jinn (Liam Neeson) before his fight with Darth Maul (Ray Park) in Episode I The Phantom Menace (1999), but the spirituality and religious practice of those with "faith" in The Force has not included “praying.”

In addition to Îmwe's “praying”, Erso wears a Kyber Crystal (the energy source of the Jedi lightsabres) around her neck. Is this Kyber Crystal necklace some kind of Jedi religious paraphernalia akin to how Christians might wear a cross around their neck? It was give to her by her mother, Lyra Erso (Valene Kane), as the family prepares to escape the ruthless Krennic with the words, "Jyn, trust The Force." What started out in 1977 as a vague obscure belief system which Han Solo referred to as a "hokey religion" begins to take on a practical shape. For those susceptible to following a New Age-style spirituality, or for those who already do, wearing a crystal as a necklace will go hand-in-hand with the modern crystal movement which has already long been part of the amorphous New Age movement. Rogue One brings the religion of the Jedi into sharper focus; fans will have to decide if this is a good thing or not.

Two side-thoughts about Chirrut Îmwe's prayer/mantra: First, "I'm one with The Force. The Force is with me," might remind Christian viewers of Jesus' words to His disciples when He said, "Abide in Me, and I in you. As the branch cannot bear fruit by itself, unless it abides in the Vine, neither can you, unless you abide in Me" (John 15:4). Christian parents with big Star Wars fans in their house might want to direct their kids to these words of Jesus over against concepts of Eastern Mysticism which are connected to the Star Wars franchise. Second, Christian prayers are not directed to some impersonal Force but to one, or all, of the persons of the Holy Trinity. Christians pray to God the Father, the Son, the Holy Spirit, in the name of Christ Jesus the Son of God. When watching Îmwe "pray" in Rogue One the nature of his spoken prayer/mantra starts to make the Force feel less like the impersonal "energy field created by all living things" as Obi Wan Kenobi (Alec Guinness) described in the original 1977 film and more like a personal god. Especially when Îmwe says things like, "All is as The Force wills it."

Overall Rogue One: A Star Wars Story does a great job dovetailing with the original Star Wars films. Edwards’ film, however, is not perfect. It has its weaknesses. To avoid spoiling things for those who haven't watched it yet let's just say there are some notably ropy CGI moments involving beloved Star Wars characters (Side note: Watching Rogue One a second time at an IMAX that showed the film on a 2D 70mm film print cleared up a majority of the issues, but not all of them, regarding the CGI), and some of the film’s plot points are perhaps a bit too unrealistic when it comes to human nature in general. Also, the fan service is a little uneven—sometimes spot-on sometimes falling flat. And there are one or two spots where the film's script is very conventional especially revolving around Jyn Erso's character. That said, what Edwards does provide is a gritty down-on-the-ground Star Wars film that fits into the epic stories originally told by George Lucas. It accomplishes what it sets out to do and provides hope that additional Star Wars standalone anthology films (like the announced Han Solo film project) will likely be worth seeing. Edwards has made a film that looks and feels like it belongs to the Star Wars universe and that's what people wanted most of all. The film’s standout performance belongs to Mads Mikkelsen as Galen Erso. With this character, Star Wars adds one more father-child relationship into its ever-expanding list of family stories.

Is Rogue One: A Star Wars Story a good film for the whole family? That depends on the age of the kids. This is not a Star Wars film for very young children. Parents may want to preview Rogue One before taking the whole family. The battle scenes are intense at times and may frighten young children and Darth Vader, while used sparingly, has a particularly menacing scene. By the end credits viewers of Edwards’ film, especially older kids, will be rushing home to re-watch Star War: Episode IV A New Hope and that is a real mark of success, even if Rogue One isn't perfect in every way.