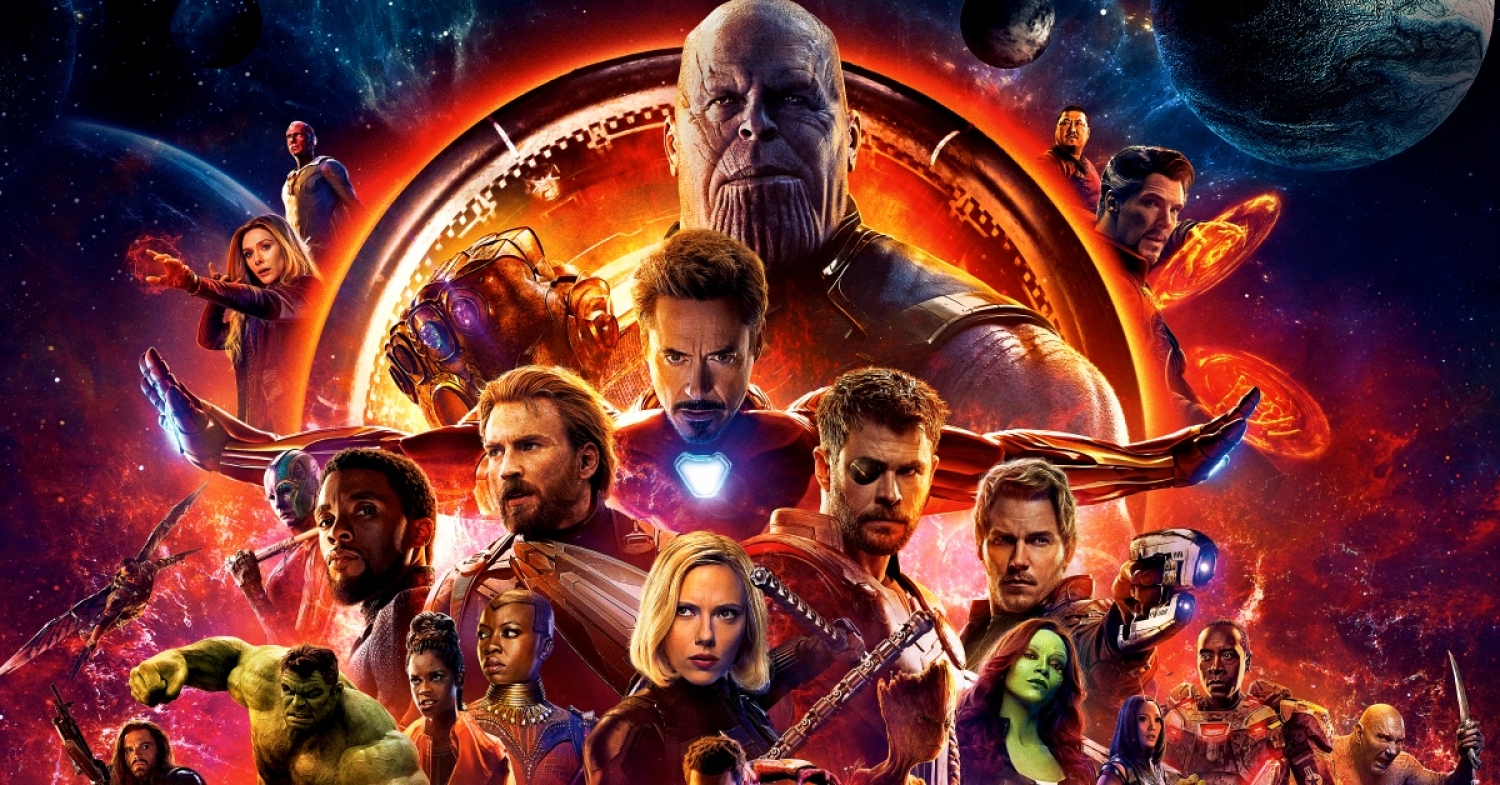 Fasten your seatbelts, there’s a lot going on!

As Nick Fury (Samuel L. Jackson) assembled the Avengers to protect the world from dangers an average person couldn’t defeat; as orphaned Peter Quill / Star-Lord (Chris Pratt) inadvertently formed his unpredictably predictable ragtag Guardians of the Galaxy; as superheroes of every variety originating in the MARVEL cinematic universe fought a rogues gallery of villains, something lurked in the shadows and grew in strength and power — a super villain: The Mad Titan, Thanos (Josh Brolin).

First introduced as Loki’s (Tom Hiddleston) puppet master in The Avengers (2012), Thanos had already been hunting for the six hidden Infinity Stones which Doctor Strange (Benedict Cumberbatch) described as coming into existence in the Big Bang which flung them into the cosmos. In Guardians of the Galaxy (2014), the Collector (Benicio Del Toro) described them as concentrated ingots forged from six singularities that existed before creation. Odin (Anthony Hopkins) in Thor: The Dark World (2013) called them “relics that pre-date the universe itself. An ancient force of infinite destruction.” Each Stone gives anyone powerful enough to wield them control over six aspects of existence: space, time, power, reality, soul, and mind. Thor, in Avengers: Age of Ultron (2015), suspecting something was up, observes, "The Mind Stone is the fourth of the Infinity Stones to show up in the last few years. It's not a coincidence. Someone has been playing an intricate game and has made pawns of us," That someone is Thanos.

In Avengers: Infinity War (2018) Thanos, after crafting a special gauntlet to house the Infinity Stones, doubles his efforts to collect all the stones for himself. Meanwhile, the Avengers, Guardians of the Galaxy, assorted other super heroes, and their friends put aside personal squabbles to thwart him. Along the way everyone begins to understand how high the stakes are in Thanos’ deadly game. If he controls all six stones he will have seemingly infinite god-like power and, as Doctor Strange tells Tony Stark / Ironman (Robert Downey Jr.), “[Thanos] could destroy life on a scale hitherto undreamt of.”

Snapping her fingers, Gamora (Zoe Saldana)—the estranged adopted daughter of Thanos—explains that, “the entire time [she] knew him, [Thanos] only ever had one goal: To wipe out half the universe. If he gets all the Infinity Stones, he can do it with the snap of his fingers. Just like that.”

Viewers familiar with the motivations of Thanos from the MARVEL comic books will notice this filmic iteration is different. In the comics Thanos desires to eradicate half of the life forms in the universe to impress the personification of death whom he loves. He thinks that wiping out half the universe would be a romantic gesture that would win her affections. He is obsessed with death. This is a motivation worthy of a callous and psychopathic villain. But in Avengers: Infinity War Thanos is the hero of his own story. He firmly believes that overpopulation causes suffering and he wants to alleviate the suffering by randomly reducing the population by half. The film contains neither the personification of death, nor a love story with death.

Thanos: When we faced extinction [on my home world of Titan] I offered a solution

Thanos: But random; dispassion is fair for rich and poor alike. They called me a mad man. What I predict came unannounced.

Doctor Strange: Congratulations, you're a prophet.

Thanos: With all the six stones I can simply snap my fingers; they will all cease to exist. I call that... mercy.

Doctor Strange: Then what?

Thanos: finally rest, watch the sunrise on a grateful universe. The hardest choices require the strongest will.

Since Thanos thinks he’s doing a good thing he is willing to sacrifice half the universe in exchange for rest from his own weariness and guilt for failing to save his own home world. This self rationalization threatens to unleash a holocaust of apocalyptic proportions on everything that lives and breathes. Note that Thanos sees no judgment in what he plans to do. Death comes to all who will die regardless of their goodness or their evil. It is simply raw blind destruction. For Thanos the end justifies the means and he is okay with that.

The writers present this horrific destruction as something tragically noble and Thanos as a moral individual who both inspires and values loyalty from characters like Ebony Maw (Tom Vaughan-Lawlor) and the rest of his Black Order. He is even shown to truly love his adopted daughter Gamora and is displeased when she is caught lying to him. The Russo brother who directed Avengers: Infinity War allows Thanos moments of gentleness, sadness, and regret and Josh Brolin delivers a surprisingly nuanced and effective performance. Often critics fault MARVEL films for their shallow, forgettable, lacklustre villains; not so in this case. Thanos is complex, memorable, and rich.

While he doesn’t exactly view life as cheap, Thanos certainly sees it as expendable. By contrast, The Avengers value life highly and are not willing to immediately give in to the idea that life is expendable especially if they love the person in question. What these MARVEL films do well is placing their heroes into predicaments that demand hard choices. There are several scenes where characters have the choice of killing someone they love to save others. This is the classic utilitarian ethical dilemma: “Do the needs of the many outweigh the needs of the few or the one?” If killing one of their own means stopping Thanos quickly and thwarting his plans, do they do it quickly or do they attempt to find another way where a fellow Avenger lives and the outcome is hopefully the same? As flawed characters their dilemma meets at the crossroads of whether an action is fundamentally right or wrong or if it’s right or wrong based exclusively on its consequences.

The character motivations for stopping Thanos are sometimes as simple as Peter Parker’s when he says, “There can't be a friendly neighbourhood Spiderman if there's no neighbourhood,” or more complex, deeply emotional, and personal like Thor’s who both grieves the loss of his remaining people, the refugees of Asgard from the end Thor: Ragnarok (2017), who Thanos destroys at the beginning of this new film and the deaths of various members of his own family. Thor puts himself in the hands of “fate” resolutely committing to defeat Thanos because he believes he has nothing left to lose. Viewers wishing to dig into the film will have plenty to think about.

The film itself, clocking in at almost 3 hours, with its extensive cast of characters and multiple plot threads all weaving toward the edge of a rather bleak cliff could easily fail in the wrong hands. That it doesn’t is impressive. Considering the enormity of what they needed to accomplish the Russo brothers have done very well creating a movie that both rewards fans while encouraging viewers to re-watch the preceding films to see how they all fit together. And while Avengers: Infinity War deals with dark grim subject matter, the Russo brothers manage to bring a lot of light and fresh humour with many of the best comedic lines landed by Drax (Dave Bautista). There are also a number of self-deprecating quips that show that the Super Heroes know just how silly everything can appear to the outsider. Bruce Banner (Mark Ruffalo) who was marooned for years on a distant planet following the events of Age of Ultron asks half jokingly, “Wait, there’s an Ant-Man and a Spiderman?” And when Dr. Stephen Strange introduces himself as Doctor Strange, Peter Parker replies “Oh we’re using our made up names.” Although that brief exchange is used in the film’s trailer, the writers and editors opted to keep a lot of the best jokes as surprises. If the film didn’t have some fun surprises and humour it would be very hard to watch.

One surprise for Christian viewers comes when Doctor Strange first meets the Guardians of the Galaxy. Not knowing if they’re more of Thanos’ henchmen, he shouts, “What master do you serve?” In response, a confused Quill / Star-Lord asks, “Oh, what master do I serve? What am I supposed to say, Jesus?” MARVEL doesn’t often bring talk about Jesus into their films. His answer proves to Stark / Ironman that Quill is from earth and can be trusted because they wouldn’t expect aliens to know anything about Jesus.

When the name of Jesus is dropped into a film that includes Thor the Norse God of Thunder, where Thor’s adoptive brother Loki confrontationally says to Thanos, “You... will never be... a god,” and the plot revolves around the attempt to wield infinite power over every aspect of existence, viewers are free to compare and contrast the Christian God with what they see in the film.

The MARVEL cinematic universe is spiritually-speaking a “big tent.” It includes everything from animistic ancestor worship in Black Panther (2018), to faux occult Tibetan Buddhism in Doctor Strange (2016), to Steve Rogers’ / Captain America’s (Chris Evans) decidedly more Christian comments in The Avengers (2012) regarding the authenticity of Thor’s and Loki’s status as gods. While books could be written about spirituality and religion in the MARVEL cinematic universe, individual viewers will want to take a minute and think about where they stand. The Christian viewer’s response to the question posed by Doctor Strange “What master do you serve?” is easy and it isn’t confused, glib, or snarky.

Avengers: Infinity War isn’t a film for young kids and even for younger teens. It could leave them worried about death, or the idea of apocalyptic destruction, or the boogeyman of overpopulation and scarcity in the real world. However, if they are Christian children and young folks they’ll want to spend a bit of time thinking about Jesus, who He is, and what He promises. Although fear of death can be very real for Christians, we need not fear it because Jesus promises to be with us even in death which He defeated at His Good Friday crucifixion and His empty Easter-morning tomb. It should come as no surprise that the next film in this franchise deals with ‘resurrection!’

Had Avengers: Infinity War been poorly executed it would have been a big black mark against the MARVEL brand. In a market where the competing DC Comic Universe is continually fighting to keep its head above water and where even Star Wars is suffering fan backlash, MARVEL needed a successful film not just at the box office but that delivered on the teases and promises MARVEL has doled out over the ten previous years. The Russo brothers, who previously directed both Captain America: The Winter Soldier (2014) and Captain America: Civil War (2016) for MARVEL, have delivered that and more. Their film carefully and confidently stands on the shoulders of the many MARVEL comic book writers and film directors who came before them honouring their contributions while adding their own touch to the unfolding MARVEL saga. That said, viewers with only a passing or cursory experience with these recent films will likely feel lost while watching Avengers: Infinity War. The film truly is a gift to its fans.