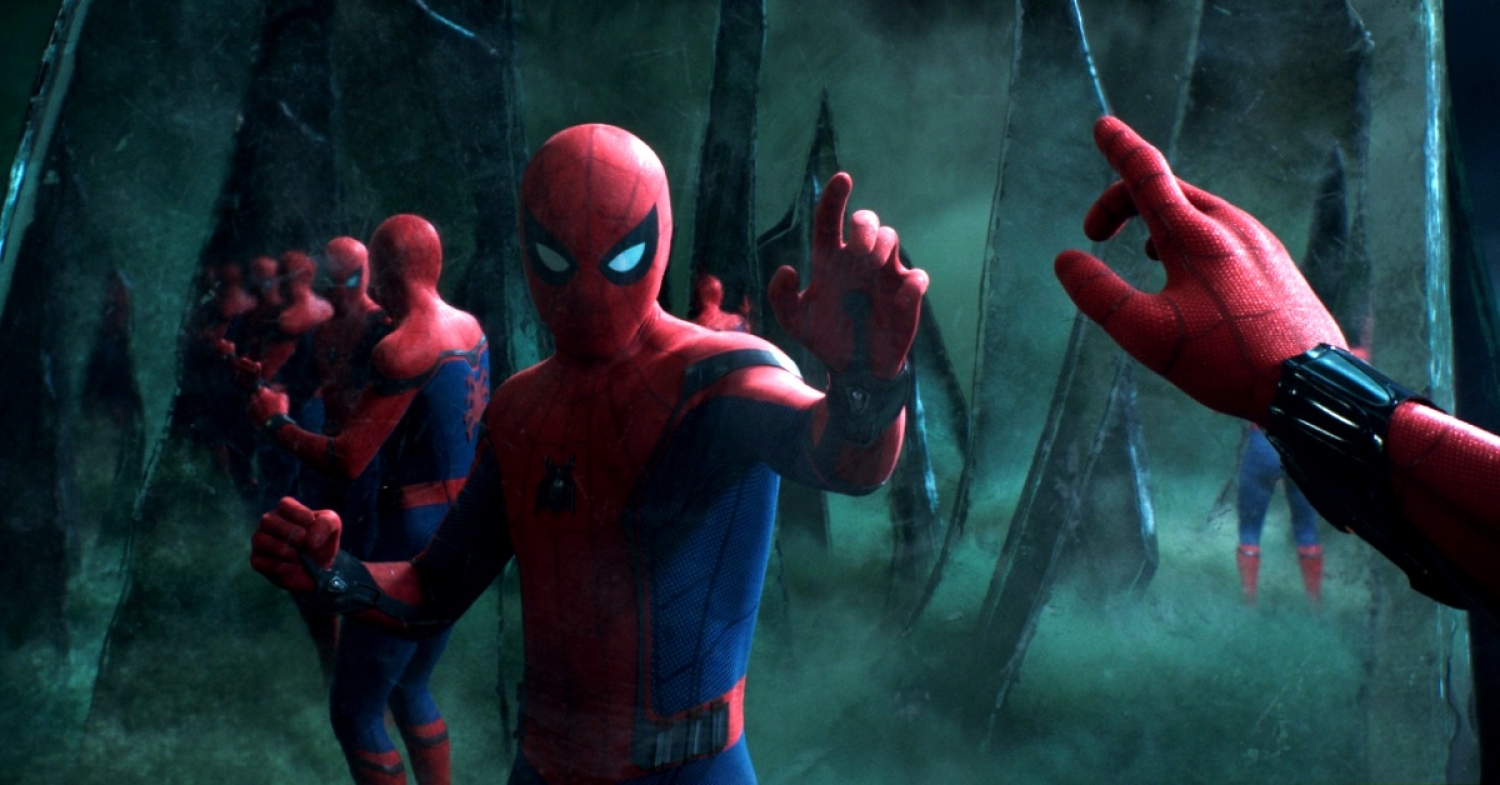 Spider-Man Fights A Web of Lies

Following the events of Avengers Endgame (2019) and the death of his mentor Tony Stark/Iron Man (Robert Downey Jr.), Peter Parker/Spider-Man (Tom Holland) faces uncertainties and personal doubts. While trying to be a normal teenager focused on his crush, MJ (Zendaya), Parker’s high school science trip to Europe is interrupted by an apparent attack of destructive inter-dimensional elemental beings. He’s drawn into a fight against this threat and meets obvious superhero Quentin Beck (Jake Gyllenhaal) from an alleged different earth who is working with S.H.I.E.L.D. agents to stop the threat. When he chooses not to fight, his trip is hijacked by top S.H.I.E.L.D. agent Nick Fury (Samuel L. Jackson) covertly guiding Parker and his friends into the heart of danger. As events unfold nothing is as it seems. The friendly Quentin Beck, nicknamed Mysterio, in whom Parker placed great trust turns out to be a villainous callous imposter.

On one hand Spider-Man: Far from Home deals with youthful inexperience and gullibility: Parker must learn how to better judge character and not be as blindly trusting. On the other hand the film deals with questions of truth and reality vs. illusion and lies. After agents Maria Hill (Cobie Smulders) and Fury brush off Parker’s enthusiasm amidst the “revelation” of a purported multi-universe, Quentin Beck/Mysterio ingratiates himself to Parker by defending Parker’s scientific curiosity saying, “Don't ever apologize for being the smartest one in the room.” Later however, once he’s revealed to be the villain, Beck/Mysterio confronts Parker saying, “It's easy to fool people when they're already fooling themselves.”

Viewers with a passing interest in Spider-Man will likely have run across the villainous Mysterio in the rogues gallery Spider-Man regularly deals with: Green Goblin, Doctor Octopus, Vulture, Lizard, Rhino, Sandman, Electro, Kingpin, and others. As in previous versions of the character Mysterio uses trickery, stunts, and special effects to bamboozle everyone around him and it’s up to Spider-Man to save the day. This time the trickery is more sophisticated and is staged on a global scale. In many ways the Quentin Beck/Mysterio of Spider-Man: Far from Home parallels Aldrich Killian’s Mandarin (Guy Pearce) in Iron Man 3 (2013). Both are jaded former Tony Stark employees/business partners seeking revenge after being snubbed by the arrogant self-centred businessman. In both cases they hold their grudges long after Stark showed evidence of personal growth with acts of selflessness and self-sacrifice.

With Stark out of the picture Quentin Beck/Mysterio lashes out at the mentor’s student Spider-Man. In this way Stark/Iron Man is still a continuing part of Parker’s story. Memorial murals honouring Iron-Man’s self-sacrificing defeat of Thanos to reverse the effects of Thanos’ wiping out half of all life in the universe crop up all over the place, even in Europe. Parker, very aware of this, when speaking to Happy Hogan (Jon Favreau) comments, “Everywhere I go, I see his face. I just really miss him.” To which Hogan replies, “Yeah, I miss him too. I don't think Tony would've done what he did if he didn't know you were gonna be here after he was gone.” This not only makes Parker a target for villains, it also adds gasoline to his fires of self-doubt since he is painfully aware he’s only a teenager and still considers himself “your local neighbourhood Spider-Man” not a globetrotting Avenger worthy of Stark’s trust. And just as the mentor Tony Stark had to grow into his role as Iron Man, MARVEL Studios is doing the same with Stark’s pupil.

Christian viewers—and everyone really for a number of reasons— should note Mysterio’s villainous plot and how he views himself. While clearly unhinged, Quentin Beck appears to have a saviour complex desiring to publicly replace Stark as a trusted international life-saving super hero while secretly showing little regard for how many people may need to die to pull of his desired plot. His delusions of grandeur are further exposed when he spitefully says to Parker, “You are just a scared little kid in a sweatsuit. I created Mysterio to give the world someone to believe in. I control the truth; Mysterio is the truth!” With all of his obvious smoke and mirrors the hypocritical Beck still thinks of Mysterio as a saviour who could be defined as “the truth” even as he is orchestrating massive false flag events. Beck’s declaration “Mysterio is the truth” should remind Christian viewers of Jesus on the night in which He was betrayed saying to His disciples, “I am the way, and the truth, and the life. No one comes to the Father except through Me” (John 14:6). It should be rather obvious that Mysterio is no Jesus; he seeks his own glory. When questioned by Spider-Man as to why he is tricking people into thinking they are in danger and that Mysterio is the one saving them when he is actually the cause, Beck replies, “You'll see, Peter. People... need to believe. And nowadays, they'll believe anything.”

This is where audiences wishing to think more deeply about the film will want to focus on the themes of truth and reality vs. illusion and lies. Not long after Jesus said “I am the Truth,” He was arrested under false pretences and brought before the Roman Governor Pontius Pilate to whom Jesus said, “For this purpose I was born and for this purpose I have come into the world—to bear witness to the truth. Everyone who is of the truth listens to My voice.” Pilate said to him, “What is truth?” (John 18:37b-38a). For Christians Jesus is “the Truth, the Way and the Life.” To non-believers the question of ultimate truth is up in the air and post-modern thinking would say it’s unknowable or in the context of relativism, ultimate truth is irrelevant or non-existent. Yet there are industries, academic schools of thought, political parties, and individuals whose desire to influence people as to what is true. Christians don’t rely on “spidey-senses” to detect what is true from what is false. Rather, they rely on the Word of God because, “all Scripture is breathed out by God and profitable for teaching, for reproof, for correction, and for training in righteousness, that the man of God may be complete, equipped for every good work” (2 Timothy 3:16–17). And as the Gospel of John says, “In the beginning was the Word, and the Word was with God, and the Word was God” (John 1:1)— passage that further supports the Christian understanding that Jesus is the Truth just as He is the Word. By comparison, the fictional Quentin Beck in the guise of Mysterio is a huckster bearing false witness about himself to gain something that isn’t rightly his: fame, praise and public acknowledgment.

Non-Christians won’t take much stock in the Christian confession that Jesus is the Truth or that the Scriptures are trustworthy and true but they too will need to think about what truth is and what truth is founded on. They will need to think about what it is they stand on. They, like the Christian, will want to be careful consumers of information especially as the tools of propaganda become increasingly sophisticated. Christians claim there is objective truth and that subjectivity is a frailty of the fallen nature of humanity. Spider-Man: Far from Home is a good reminder to everyone that there are people willing to take advantage of this frailty for their own ends and such exploitative efforts may even attempt to take advantage of a person’s good nature as Beck does with Parker. A major turn in the film’s plot hinges on the fact that Stark trusted Parker to “do the right thing.” This only works if Parker knows what “the right thing” is. As a result this film can be seen as an encouragement towards knowing right from wrong and growing in the discernment necessary to act virtuously in the truth. Jesus’ words of warning to His disciples seem to fit well into this story of Stark passing the torch to Peter Parker, “Behold, I am sending you out as sheep in the midst of wolves, so be wise as serpents and innocent as doves” (Matthew 10:16).

Spider-Man: Far from Home is a little less crass than Spider-Man: Homecoming (2017) while still keeping the awkward teenage vibe. With many humorous moments director John Watts, in his sophomore outing with these characters, provides a welcome light and fun film following the seriousness of Avengers: Endgame which is remarkable considering some of the topics the film addresses. No doubt this was accomplished with the assistance of Chris McKenna and Erik Sommers who also helped write Ant-Man and the Wasp (2018) a recent entry in another one of MARVEL Studios’ more light-hearted film franchises. Audiences who stay to the end of the credits should likewise be satisfied with how they have woven this film into the ever-expanding MARVEL Cinematic Universe.