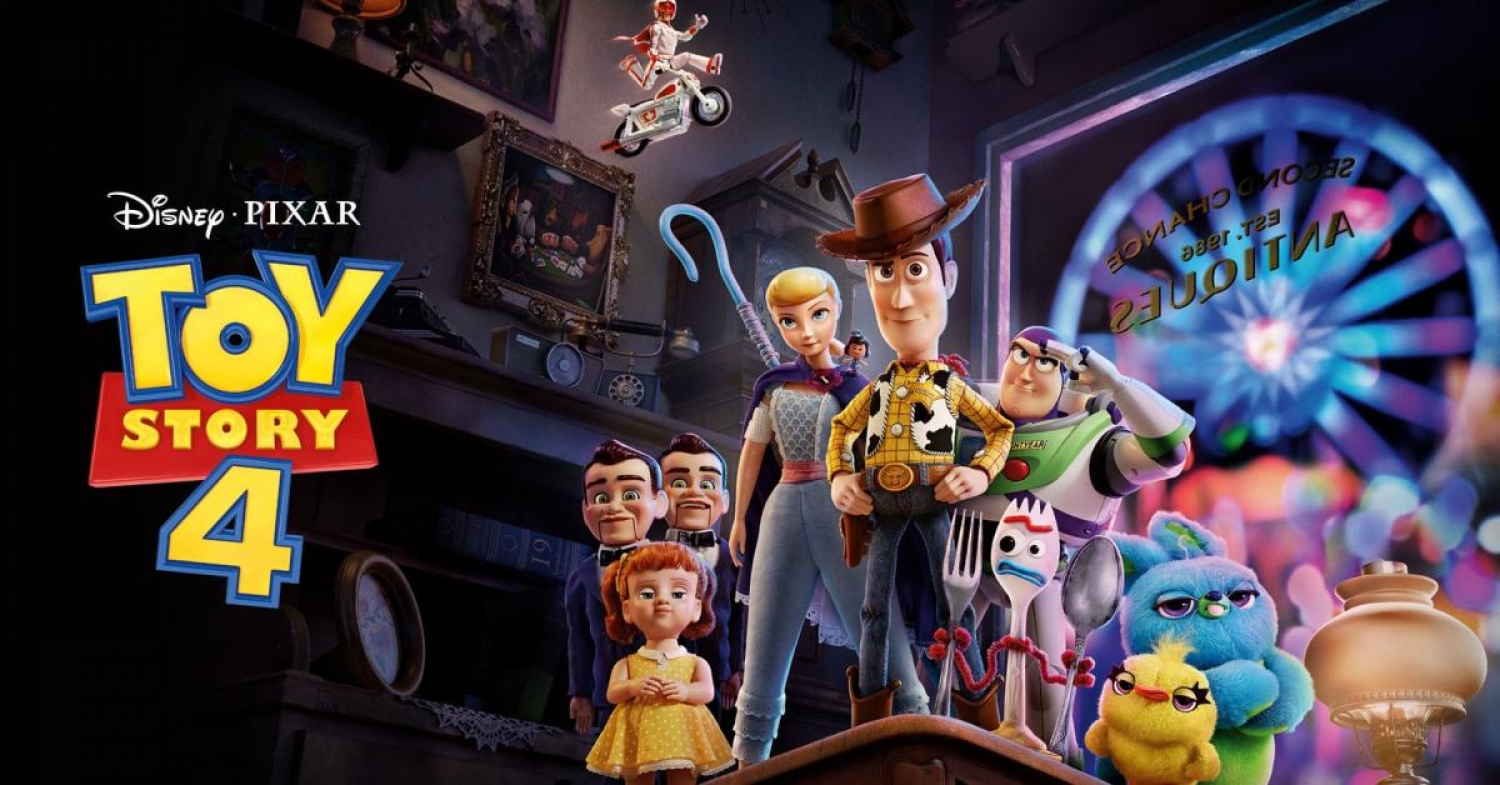 Toy Story 4 continues the story of Woody (Tom Hanks) and his fellow toys who, at the end of Toy Story 3 (2010), were given by the college- bound Andy to a shy little girl named Bonnie (Madeleine McGraw). Woody struggles to adapt to life with a new child who doesn’t see him as the favourite toy. However, he finds new purpose when Bonnie, with Woody’s help, makes a new friend: Forky (Tony Hale). Woody takes Forky under his wing to show him the ropes and teach him what it means to be the favourite toy. While on a family trip Woody and the other toys meet up with an old friend Bo Peep (Annie Potts), and together deal with concepts like conscience, being an abandoned or “lost toy,” and what it means to be a toy to a child in need. Ultimately the film builds on the theme of “moving on” found in Toy Story 3 only now it’s applied primarily to Woody.

The film is technically superb with computer animation that takes advantage of the advancements since Toy Story (1995). Bo Peep truly looks like a porcelain doll and the spork, pipe cleaner, and broken popsicle stick with which Bonnie makes Forky look perfect not to mention all the materials filling the small town antique story where Woody meets the duplicitous Gabby Gabby (Christina Hendricks), her ventriloquist dummies, and the dare-devil, Evel-Knievel-style, motorbike-riding Duke Caboom (Keanu Reeves)—a Canadian stunt toy. Everything from the antique store’s cat to the mix of lighting conditions, rain effects, and other naturalist elements are near photo-realistic. Bonnie, her parents, and the other human characters still have that Toy Story feel to them and while more naturalistic are still cartoonish characters but set in a more lifelike world. What the animators at PIXAR have accomplished is clearly the result of decades of dedicated work and continual refinement of their craft as animators.

The script is also a finely crafted achievement weaving a story with relatable plot elements for a multi-generational audience. The youngest viewers see toys come to life; parents get a story about a little girl who still wants to play with toys even as she’s about to start school; millennials (who grew up with the Toy Story films while watching Toy Story 3 were just beginning to come to terms with the idea of going to college and growing up) see Woody and Bo Peep presented as an encouragement to continuing their adult life by settling down into a romantic relationship; and for grandparents Woody provides a lesson about retirement (more on that later). Also, with the character of Forky audiences see the story of a vocational shift. As a spork Forky views himself as a single-use plastic item who, after serving his purpose, becomes disposable as trash. While played for laughs, his movement from trash to toy—thanks to Bonnie— is meant to be self reflective. In fact, many of the central characters are going through a kind of soul searching which will appeal to anyone struggling to find their place in the world no matter their age. Many of these storylines on their own are compelling and even present fruitful and worthwhile content to consider however, the film’s overarching plot requires more contemplation.

Vocation is a key element in the Toy Story films. In Toy Story 4 the vocation of “toy in service to a child” is described as a toy’s most noble aspiration and achievement. A twisted desire towards this noble estate undergirds the covetous plot of Gabby Gabby. She plots to steal Woody’s mint-condition pull-string voice-box to replace her own factory defective voice-box to make herself more attractive to children. If she only had a working voice-box surely the child of her dreams would pick her out from among the toys at the antique store and take her home! Bo Peep, who ended up in the same antique store following Toy Story 2 (1999), grew tired of waiting for a child to pick her out and take her home and instead went rogue striking out on her own becoming a “lost toy” —a toy with neither kid nor home. And while Bo Peep is the image of the independent self-sufficient woman who can do things on her own with a little help from friends like the polly-pocket-style Giggle McDimples (Ally Maki) and the G.I. Joe-style Combat Carl Jr. (Carl Weathers) she still has feelings for Woody and fond memories of her past life as cherished toy. Add to this the traveling carnival game prize toys Ducky (Keegan-Michael Key) and Bunny (Jordan Peele) who both desperately want to be a loved toy to some child, and Duke Caboom’s desire to live up to his death-defying TV commercial and a picture begins emerging of a world in which every toy is either seeking to be loved or must come to terms with not quite fitting in.

Building on this theme, Woody’s own existential crisis prompts a conversation with Buzz Lightyear (Tim Allen) about their “inner voices” and how Woody’s conscience drives him to make selfless decisions, like rescuing Forky because he's Bonnie's new favourite. This, like Forky’s attempts to wrap his mind around not being trash, leads to humorous moments where the classically unreflective Buzz Lightyear in an effort to grow as a character begins pushing the buttons on his chest believing them to be his conscience. Buzz’s desire for personal growth is encouraged when the other toys turn to him for leadership after Woody goes AWOL searching for Forky.

When Woody is asked why he is willing to risk so much to rescue a spork he reveals that his motives are not completely altruistic; all his efforts may be an attempt to retain his self worth by making himself useful to Bonnie. This prompts a line of thinking: “Is it time for me to let go and move on? Am I happy?” Putting the best possible construction on Woody’s situation introduces the idea of toy ‘retirement.’ It’s never stated that clearly, but Woody ends up having to decide if he will stay with the toys and live as one of Bonnie’s less-loved toys or “follow his heart” and live life as a “lost toy” with Bo Peep essentially abandoning the noble vocation of a toy in service of a child—living life for oneself and not for others. Retirement is not a bad thing and for many it’s a reward for hard work but the question of motives is worth considering.

This is where Christian viewers may want to think a little more deeply about the film’s themes. Toy Story 4 upholds “service to neighbour” as noble—a worthy theme for a family film. The way Woody seeks to help Bonnie retain her knew favourite toy fits well with the spirit of the commandment “You shall not steal.” It’s not just that Christians are to avoid theft but they can serve their neighbour by working to help them improve and protect their possessions. Even Gabby Gabby learns that stealing Woody’s voice box isn’t the sure-fire solution to her heart’s desires and that coveting what doesn’t belong to her is wrong. Woody even willingly sacrifices his pull-string voice-box but in the end he walks away from his vocation to follow his heart.

On the one hand this could be viewed as purely an investigation of when someone should retire from their work, while on the other hand the story of Woody and Bo Peep becomes one where feelings and a personal desire for happiness supersede loyalty, duty, and responsibility. Woody and Bo Peep’s choice to run away from the life of a toy in their personal pursuit of ‘happiness’ also up-ends the traditional established social order of the toy world within the Toy Story universe and is not consistent with Woody’s character as revealed over the previous three films. Woody has always been a stalwart of duty and honour who repeatedly sacrificed himself for Andy and then for Bonnie. What does this character shift suggest to viewers? Is there a time when it’s okay to walk away from your deepest most cherished beliefs if you think it will make you happy to do so?

Christian viewers will also want to think about the nature and expectations of loyalty, duty, and responsibility that come with certain vocations. For instance, there are vocations from which a person can retire like being a welder or a soldier. But for some vocations, like motherhood and fatherhood, or being a daughter or son, or a brother or sister, "retirement" to seek happiness elsewhere would cause great harm to their family. Even the vocation of wife and husband includes vows like "till death do us part." In many ways the vocational relationship between the toys and the children in the Toy Story films go beyond honest labour, or what might be called a career, into something more like the vocational relationships found in family. As a result some viewers might find Woody's 'retirement' unsettling.

Toy Story 4 is an exceptionally well-crafted film and a real technical achievement. It’s a fun and engaging film to watch. It does however reflect the spirit of the times. While it has a couple of blink-and-you-missed-it moments (including a lesbian couple at Bonnie’s kindergarten orientation) overall it avoids the divisive culture war content found in more and more Hollywood films. However it doesn’t need to put such obvious content front and centre because the film draws from the underlying cult of happiness that pervades the decision-making of North Americans. In that way Toy Story 4, while enjoyable and clever, captures completely the zeitgeist underpinning the culture. And even though it has many positive stand-alone moments, when the film’s philosophy embodied in Woody is drawn to its logical conclusion, it may give licence to abandon loyalty, duty, and responsibility in favour of personal happiness. This alone is worthy of critique and deeper contemplation. The good news is that these Toy Story films actually invite the audience to think about what they are watching and audiences will be well served if they accept that invitation. Everyone watching the film will be left with something to think about.

You can also find this article featured in the Canadian Lutheran and Reporter online.