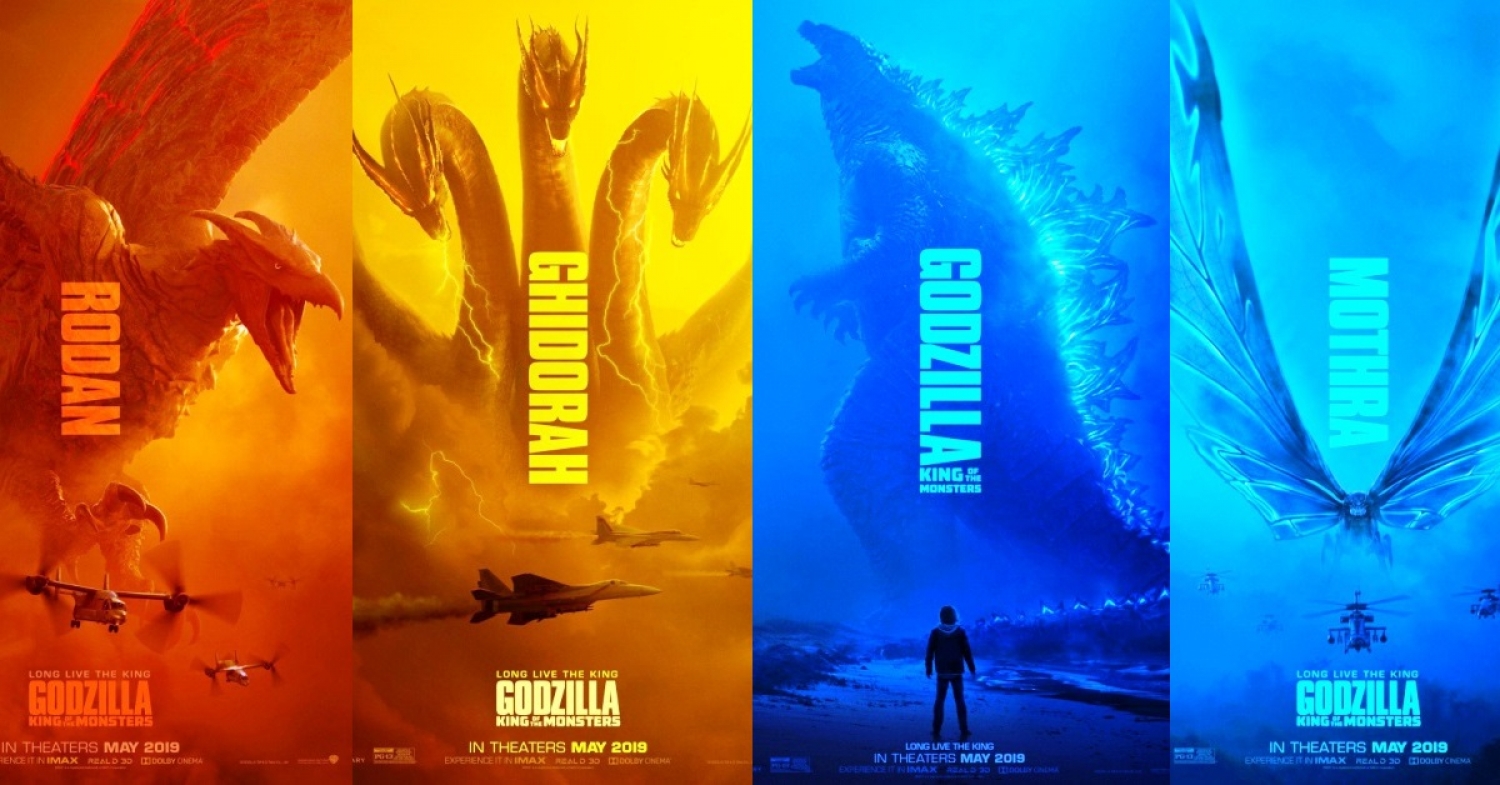 A Novelty of Gigantic Proportions

The film picks up where Godzilla (2014) left off—shortly after the destruction of San Francisco. In that film Godzilla is the hero saving humanity from monsters who emit electro-magnetic pulses that threaten to wipe out all electronic technology on earth. In Godzilla: King of the Monsters Godzilla again acts as the “saviour” of humanity but the stakes are raised as multiple Kaiju-style monsters—called Titans—emerge from hibernation around the world. A paleobiologist, Dr. Emma Russell (Vera Farmiga), working for a government agency called MONARCH which has spent decades finding, cataloging and studying these dormant monsters, has developed an audio technology device called ORCA which effects the Titan’s moods and emotional states. In what at first looks like a kidnapping, Dr. Russell and her teenage daughter Madison (Millie Bobby Brown) are forced at gunpoint to join a group of eco-terrorists led by Jonah Alan (Charles Dance). Dr. Russell however has clearly gone rogue believing the world needs to be cleansed of humanity because in her estimation human overpopulation and manmade pollution threatens all life on earth a idea she shares with the eco-terrorists. Dr. Russell and Jonah Alan’s solution involves using her device to awaken the other Titans who they believe will restore balance to the world’s ecosystems even if it causes worldwide destruction and enormous human fatalities.

Her estranged husband, ecologist and animal behaviourist Mark Russell (Kyle Chandler), who with his wife and daughter still grieves the death of their son Andrew in the San Francisco rampage, is drawn back into project MONACH as it attempts to deal with Godzilla, the rise of the Titans, and his rogue wife. Skeptical of the strategies and work of MONARCH, Russell is more interested in rescuing his daughter than protecting Godzilla. In fact where his wife wants to use Godzilla and the Titans to destroy humanity out of a kind of vengeance for their son’s death he in his grief would rather see Godzilla and the Titans destroyed to save humanity. This Russell at loggerheads with both his rouge wife and the rest of the MONARCH researchers, Dr. Ishiro Serizawa (Ken Watanabe); Dr. Ilene Chen (Ziyi Zhang); Dr. Rick Stanton (Bradley Whitford); and Dr. Vivienne Graham (Sally Hawkins), who want to protect Godzilla and continue to study the Titans. Mix in some external US military involvement led by Admiral William Stenz (David Strathairn) which adds more chaos into an already chaotic situation and Godzilla: King of the Monsters becomes a story about humans vainly coping with catastrophe while a battle royale is waged between ancient Titans seeking dominance who are largely disinterested in the minuscule humans around them.

If Godzilla is the film’s protagonist then the antagonist is King Ghidorah, Monster Zero, a three-headed dragon who had been encased in the ice of Antarctica before being released by Dr. Russell and Jonah Alan’s eco-terrorists. Godzilla: King of the Monsters includes other Godzilla franchise fan favourites like the massive pterodactyl Rodan which sides with Ghidorah, and the giant moth Mothra the Queen of the Monsters who sides with Godzilla, as well as a bevy of other lesser monsters. Even King Kong and Skull Island are teased a couple times along the way. The various fights between these central four Titans are the main reason people will see Godzilla: King of the Monsters. Most will not go for the human characters even though there are some compelling stories, they are poorly written. That said, the actors make the best of what they have to work with and Kyle Chandler, Millie Bobby Brown, and Ken Watanabe give better performances than the script deserves. The film’s selling feature is the monsters not the people mixed up in the monster fights. Expecting high drama out of the human characters will result in overall dissatisfaction. Godzilla (2014) provided more compelling human characters and plot than this film.

While Godzilla (2014) included some interesting religious content, where do things go in the new film? Godzilla: King of the Monsters in many ways operates on two levels. First, there is the more conventional religious content. Upon seeing the three-headed King Ghidorah encased in the ice of Antarctica an eco-terrorist exclaims in awe “Holy Mother of God” referencing the Virgin Marry to which Jonah Alan quips, “she had nothing to do with it”; a soldier stationed with the MONARCH team is shown crossing himself before going into danger; Dr. Stanton makes a goofball remark emphasizing “god”-Zilla; and while a town in Mexico is destroyed, a Roman Catholic church is prominently shown in wide shots and then the cross of the church in extreme foreground is shown in a long shot of Ghidorah mounted on the top of a mountain; a shot that is repeated with Rodan in submission at his feet. This use of the Christian cross is very deliberate. There is also plenty of talk about these Titans being gods but that gets into the film’s unconventional and heretical religious content.

Second, the more unconventional content revolves around ideas commonly found in YouTube conspiracy theory videos and sci-fi weird fiction. For instance there are striking similarities with the unusual fiction of H.P. Lovecraft. Ghidorah, an ancient extra- terrestrial monster buried in the ice of Antarctica, is like Lovecraft’s elder gods in general and his Shoggoths featured in his novella “At the Mountains of Madness” (1931) which are also buried in the ice of Antarctica and are part of Lovecraft Cthulhu Mythos. Also one of the features of Lovecraft’s Cthulhu Mythos is that these ancient extra terrestrial beings are written as being dispassionate and callous towards humanity. In both Lovecraft’s fiction and in this film humans find this sort of dispassion towards them malevolent. Godzilla on the other hand, who is terrestrial in nature and a sort of personification of nature, is more benevolent towards humanity.

When it comes to general conspiracy theory-related material, all the Titans fall into the category of the “crypto-zoological” and the film’s end credits suggest all monsters recorded in art throughout history are linked to these Titans. Dr. Chen, the MONARCH mythologist, is there expressly to emphasize this even referring to the monsters as “the first gods,” making Ghidorah a sort of materialist explanation of the Babylonian dragon of chaos Tiamat which should make the Higher Critical Bible Scholars in the audience happy. Here viewers likewise get a cosmology loosely based on an amalgam of the Titans from Greek mythology and the ancient aliens of Erich von Däniken's "Chariots of the Gods" (1968). But wait there’s more! Add a submerged Atlantean city in the hollow earth and the conspiracy theory/weird tales vibe is complete. Clearly the majority of the loopy, eco-friendly, Gaia earth mother, ancient alien storyline is meant to show up Christianity in some fashion. This however will only be effective with viewers who bought into videos like the 2011 Zeitgeist YouTube "documentary" serious and thoughtful Christians will not be swayed by an eccentric Godzilla film. Even the choice of the name MONARCH for the government research agency investigation the Titans, first introduced in Kong: Skull Island (2017), could be associated with the mind control project “Monarch” which is supposedly connected with the real-world CIA Project MKUltra referenced in Stranger Things (2016-) starring Millie Bobby Brown. All of this makes Godzilla: King of the Monsters a real grab-bag of oddball ideas squarely placing it in the B-Movie creature feature genre regardless of it “A grade” production values.

Perhaps the most conventional Christian analogies present in the film swirl around Godzilla. On one hand it’s easy to see the leviathan imagery of Job chapters 3 and 41, Psalms 74 and 104, and Isaiah chapter 27 as Godzilla is a massive dangerous aquatic creature beyond human control. On the other more positive hand, the film makes a rather clear connection between Jesus and Godzilla; Godzilla has an obvious death and resurrection and acts as the defender of humanity against the demonic Ghidorah who at times resembles the great dragon who in the bible “has come down to [the earth and sea] in great wrath, because he knows that his time is short!” (Revelation 12:12). That said such biblical comparisons are a little thin when matched against the film’s mountain of nonsense. The whole thing is like a spiritual junk drawer filled with a smattering of useful things and a load of other worthless stuff. This shouldn’t be a big surprise as director Michael Dougherty used the same approach as a writer involved with X-Men: Apocalypse (2016).

One theme that emerges also shows up in the Serj Tankian cover of the Blue Öyster cult song “Godzilla” (1977) played over the films end credits. Lyrics like “History shows again and again how nature points out the folly of man,” in the context of the film suggest that humanity over the centuries has been curtailed by the Titans who rise up when humanity needs to be put in its place. In that way a simple moral of the story could be, “Pride goes before destruction and a haughty spirit before a fall” (Proverbs 16:18). By analogy a very generous surface reading of Godzilla: King of the Monsters could be one of warning, a reminder that as advanced as humanity becomes we are not ultimately in control of all things. Christian viewers will know that all of creation is in the hands of God as the Bible says, “In His hand is the life of every living thing and the breath of all mankind (Job 12:10). Also the idea of the world being corrected for its evils is certainly biblical, “For the LORD is enraged against all the nations, and furious against all their host; He has devoted them to destruction,” (Isaiah 34:2) this however is not accomplished by means of giant monsters like Godzilla or Ghidorah.

The most ardent fans will see connections to the previous Godzilla film Destroy All Monsters (1968) where a pile of monsters show up on screen and Ghidorah is defeated. While this film doesn’t play out in the same way, the climax hits the same notes especially where Godzilla is acknowledged by the rest of the Titans as the Alpha King of the Monsters. Fans waiting to see Ghidorah, Rodan, and Mothra on the big screen with Godzilla will be satisfied, however they, along with the more casual viewers, may be left asking, “How many times can viewers see apocalyptic representations of cities being destroyed and still find it shocking?” There is no novelty to it at this point. Whether it’s San Francisco in Godzilla (2014) or Boston in this film, they all seem to blend together: perhaps setting the upcoming Godzilla vs. King Kong (2020) on the tropical—albeit fictional—Skull Island where there are no cities to wreck will present a refreshing change of pace.