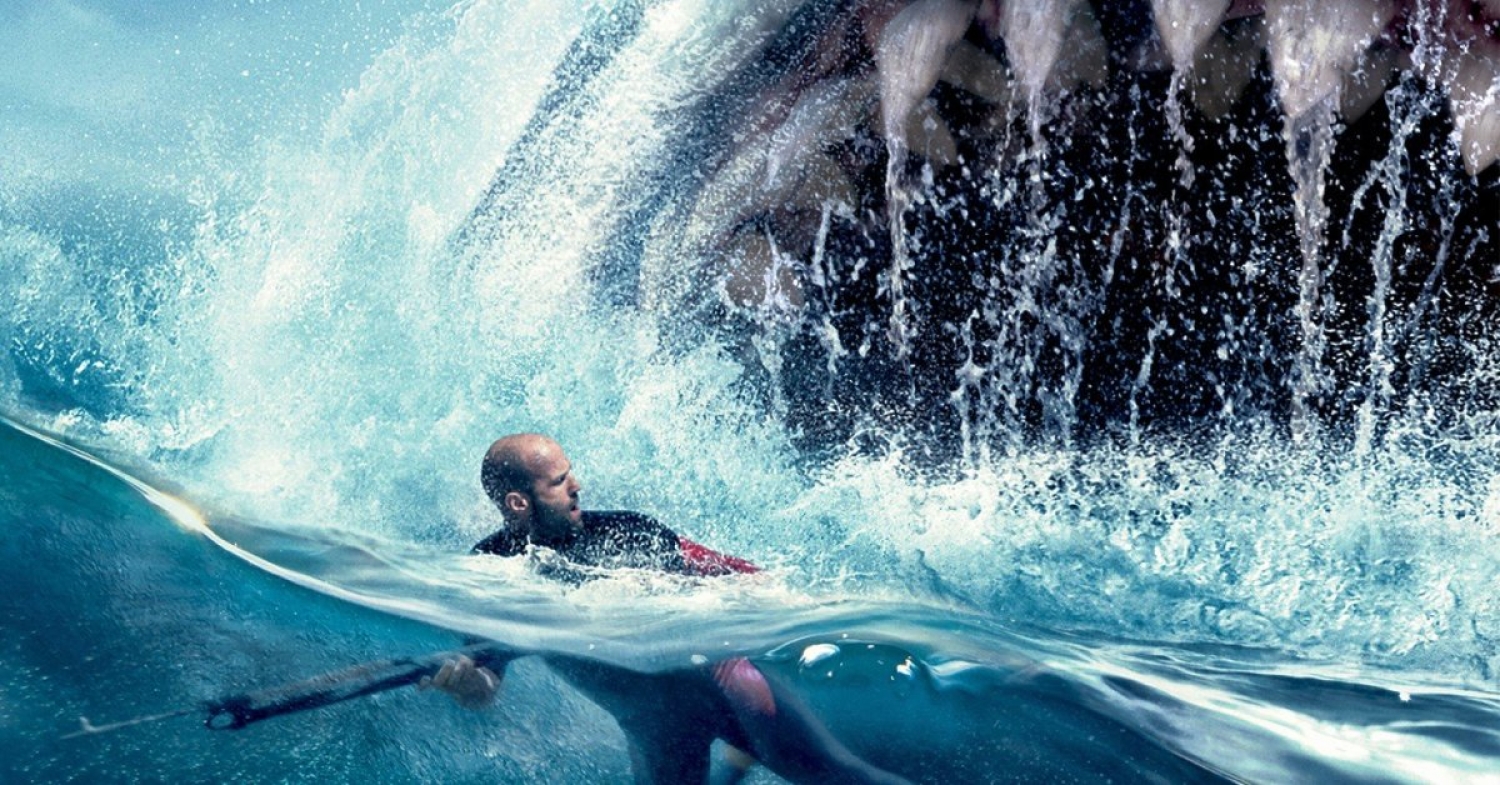 When Steven Spielberg’s Jaws hit theatres in 1975 the film’s tagline was: "You'll never go in the water again." Some people didn’t, and many more had second thoughts every time they dipped their toes in water —even at their local swimming pool! Jon Turteltaub’s The Meg (2018) won’t likely scare up the same response. The corny $130 million B-film about a believed long-extinct 70-foot megalodon shark hunting marine biologists and oceanographers in the waters around a western Pacific billionaire-funded state-of-the-art research laboratory may take a bite out of this summer’s box office, but Spielberg’s 25-foot great white shark from Jaws has sharper teeth.

The Meg is the latest in a long list of shark films working to outdo the success of Jaws (1975) that don’t even come close, aiming more for cheap thrills and spectacle. After asking what would make sharks more frightening than the shark in Jaws, film writers answer by making the shark bigger, giving it two, three or five heads, creating a shark/octopus hybrid or some super shark, or putting sharks in a swamp, in the snow, or in a tornado like in Sharknado (2013) and its sequels. Apart from loosely being about sharks, all these films try to do one thing: make box office lighting strike twice. As expected this approach never hits the mark.

There have been some unnerving shark films along the way that get the dread of man vs. nature right; films like Open Water (2003), The Reef (2010) or The Shallows (2016) all provide genuine scares. They are simple films about people in need of rescue hunted by sharks. Audiences looking for something similar should keep swimming because they won’t find it with The Meg. Turteltaub’s film, based on a novel by Steve Alten, doesn’t plumb the depths of real world terror. Instead, The Meg is more like an amusement park fun house or hall of mirrors: fun in the moment but as lasting as cotton candy or popcorn.

Jason Statham, who competed for England in the 1990 Auckland Commonwealth Games, plays Naval Captain Jonas Taylor and with his real-world diving skills is surprisingly convincing when he’s in the water. Otherwise he could just as easily be playing his Frank Martin character from the Transporter franchise or Lee Christmas from The Expendables movies or Deckard Shaw from The Fast & Furious films. Like those other characters, Statham as Jonas Taylor is a man of action.

The film opens with a deep-sea rescue mission gone wrong when something big and dangerous attacks a damaged nuclear submarine mid-rescue. Jonas narrowly escapes but sacrifices two of his friends to save the submarine crew. Years later he is called back into action when his ex-wife, Lori (Jessica McNamee), and two other oceanographers, Toshi (Masi Oka) and The Wall (Ólafur Darri Ólafsson), are similarly attacked while penetrating the deepest reaches of the Mariana Trench. Their work on behalf of the wisecracking billionaire Mr. Morris (Rainn Wilson) lures the prehistoric megalodon shark to the surface where it threatens to become the apex predator in the Pacific Ocean. Fighting to stay alive while falling in love with Suyin (Bingbing Li) the daughter of research marine biologist Dr. Zhang (Winston Chao), and her adorable daughter Meiying (Shuya Sophia Cai), Captain Jonas and the rest of the team struggle to kill the megalodon before it can wreak havoc on an unsuspecting world.

If viewers care to think a little deeper about the film, there is a bit of dialogue from Dr. Zhang that may provide a jumping-off point. After everything has gone horribly wrong and they believe they have neutralized the megalodon threat, Zhang laments that they didn’t fight the shark for their dead colleagues or for science, “We do what people always do: find, then destroy.” Christian viewers might be reminded of first chapters of the Bible’s Book of Genesis, before the fall into sin, where God blessed Adam saying, “Be fruitful and multiply and fill the earth and subdue it, and have dominion over the fish of the sea and over the birds of the heavens and over every living thing that moves on the earth” (Genesis 1:28). In that moment God put the world and all its plants and animals in the hands of humankind. When modern readers see words like dominion and subdue, images of violence and harsh power come to mind. But God expected his human creation to administer that dominion with grace, mercy, patience and loving-kindness (Psalm 145:8). More evidence of this attitude comes when the LORD God, “brought [every beast of the field and every bird of the heavens] to the man to see what he would call them. And whatever the man called every living creature, that was its name” (Genesis 2:19). Biology and taxonomy start in the deep recesses of human history yet because of the fall, the relationship between man and nature changed, cursed with “thorns and thistles” (Genesis 3:18). Shark teeth are nothing to worry about if they aren’t used to bite.

In terms of drama, everything from Ernest Hemingway’s “Old Man and the Sea” (1951) (which The Meg is not) to a film like Jaws (1975) (which again, The Meg is not) depend on an underlying antagonistic relationship of toil and even potential danger between the human experience and the natural world that even in modern times lurks just below the surface of the water. It is fertile ground for drama, suspense, and thrills, even existential dread. Sometimes the danger or monster might be a lion or tiger or bear or shark, but more often in modern storytelling the danger or monster is humankind. At one point, when coming across a scene of destruction apparently caused by the megalodon, Zhang looks at wrecked fishing boats and the carcasses of many dead sharks and says, “This shark doesn't have fins. It was killed by a shark catcher. They cut off the fin and released the shark to death. All for a bowl of [shark fin] soup.” Jonas Taylor might punch sharks to save people—yes audiences get to watch Statham punch the megalodon—but these fin poachers kill sharks for profit.

While stewardship of the natural world is a noble and Christian endeavour, the tension between protecting and providing for people while still caring for nature can add a lot to this kind of film. Unfortunately, The Meg never finds its sea legs in this regard and comes off more like a film that wants to have its cake and eat it too. It never resolves whether it should be serious and poignant or over-the-top and cheesy, filled with goofy predictable action. The Meg doesn’t know which way it’s sailing. The ocean may be deep, but The Meg ends up in rather shallow water and maybe that’s okay. The film is at its best embracing its B-grade goofiness. This is not Sir David Attenborough's nature documentary series Planet Earth or even Richard Attenborough's Jurassic Park (1993). In the end The Meg has more in common with the ridiculous “This time it’s personal” Jaws: The Revenge (1987) than with the suspenseful "You'll never go in the water again" Jaws (1975). The oceans need care and good stewardship, but The Meg isn’t likely to inspire such action. That said, fans of Jason Statham will have fun and there is enough action to keep things afloat.