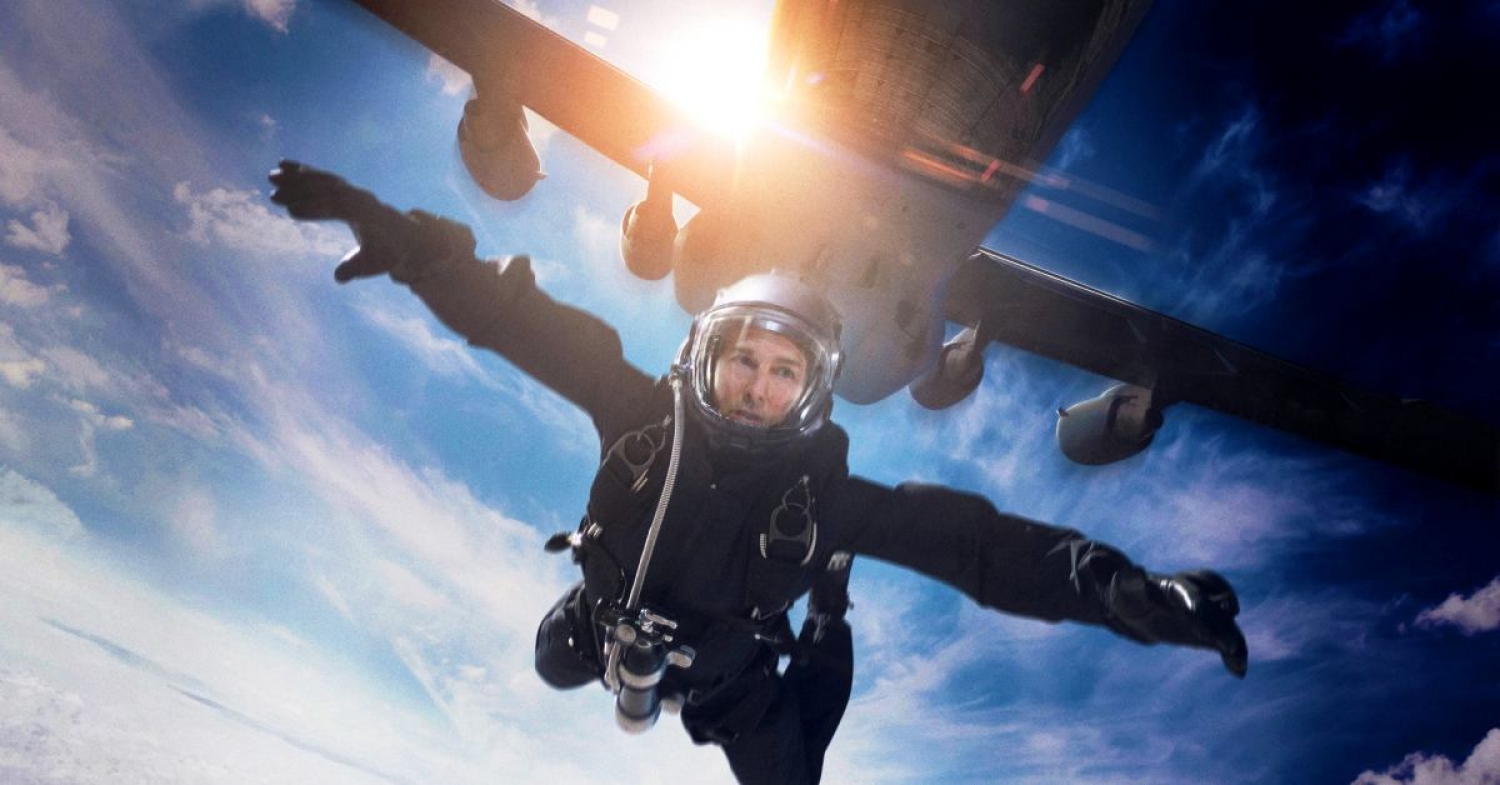 Plot takes back seat to action

With blood, sweat, and a broken ankle Tom Cruise as Ethan Hunt bursts onto the screen for yet another Mission Impossible film in Mission: Impossible – Fallout. It’s called Mission Impossible not mission possible for a reason: the film is designed to overwhelm and amaze viewers at every twist and turn.

While under suspicion of being involved in an international nuclear terrorism plot, Hunt, leader of the IMF (Impossible Missions Force) and his team must unmask and thwart the real villains and save the day. Riding shotgun with him, team members Benji Dunn (Simon Pegg) and Luther Stickell (Ving Rhames), is CIA special operations point man August Walker (Henry Cavill) sent by CIA Director Erica Sloan (Angela Bassett) to keep an eye on IMF activities and assist in retrieving three lost plutonium cores. Hunt and the IMF let the radioactive payloads fall into the hands of the elusive John Lark and his cohorts, The Apostles, who wish to strike a blow against three of the world’s prominent religious faiths to bring suffering and usher in their twisted idea of peace. The suspicion that Hunt is John Lark sends the IMF and Walker underground in a race against time. Further complicating the story are two returning characters from Mission: Impossible - Rogue Nation (2015): Solomon Lane (Sean Harris), the rogue British MI6 agent and head of the Syndicate, and Ilsa Faust (Rebecca Ferguson) an undercover MI6 agent.

The film’s plot is mostly there to provide an excuse for the death-defying stunts by Cruise. This is both a strength and weakness. The film is high octane fun to be sure, but there are some questions worth asking for those who like to ponder their film experiences even when watching a pedal-to-the-metal action film.

First, while Cruise is 56 years old and clearly in excellent health, how long can he continue to do films of this nature? The whole film rides the sharp edge of vanity and entertainment. Audiences seek entertainment from his vanity while Cruise offers up his vanity for entertainment. Why vanity? Cruise insists on performing his own stunts and from all reports is more reckless and impulsive than his character Ethan Hunt. He is willing and able to press his will on the director/writer Christopher McQuarrie to the point where Cruise filmed the whole HALO (high altitude low opening) action sequence without a stuntman. Preparations for the scene included more than a hundred jumps from an altitude of 25,000 feet to get three long takes. Add to this the dangerous helicopter piloting, and motorcycle chase scenes over cobblestone streets in Paris France and one must wonder how Cruise is insured or at least what the cost of insurance must be. By actively performing the stunts himself no CGI is necessary to add his face to a stunt man. And the stunts—the film’s epic set pieces—come first, before location, plot, and dialogue. Cruise chooses what kind of stunt he wants to do, and McQuarrie builds the film around Cruise’s choices. He has an exceptional amount of creative control and influence.

Second, something that on the surface may seem irrelevant is Cruise’s adherence to Scientology which most reviews and interviews don’t bring up. This may seem irrelevant (audiences are asked regularly to separate an actor’s beliefs from their creative work) until it becomes obvious the actor’s or director’s beliefs are influencing their projects. Within Scientology Cruise is seen as a messiah-like figure and Mission: Impossible – Fallout appears to be Cruise pushing the envelope even further to live up to that image.

For Scientology followers the next step in humanity’s evolution is homo novis (new man) a kind of godlike being.[1] What audiences are witnessing is a man desperate to be homo novis. It’s easy to marvel at Cruise’s daringness when the truth is set aside, but daringness is not what’s fuelling his seemingly impossible stunts; it is zeal for the teachings of Scientology. He is clearly a firm believer in its self-help and self-improvement teachings. As a result, the action in Mission: Impossible – Fallout is spectacular and over the top. In one such moment that caused audible gasps from the audience, Cruise jumps from one building to another in London, England. When filming the sequence Cruise broke his ankle! Why is this important? When told by a doctor it would be nine weeks before he’d be back up on his feet and that he may never run again, Cruise said he didn’t have time for that and within six weeks he was back at work doing stunts involving running. If asked Cruise undoubtedly would point to this as evidence of the veracity of Scientology; but don’t be fooled. Hong Kong martial arts expert and actor Jackie Chan famously performed his own stunts and likewise broke bones and sustained multiple serious injuries throughout his acting career but without the aid of Scientology.

Christians may want to contemplate the name of the villains in Mission: Impossible – Fallout. The anti-religious organization of atheistic anarchist terrorists bent on bringing down religion, government, and the law are strangely called “The Apostles.” In the broad sense the word apostle can simply mean “one sent on a mission.” However, throw the definite article “The” in front of Apostles and the usage shifts to one where it universally pertains to The Apostles of the New Testament (the first Christian missionaries personally sent by Jesus). What’s more, the film’s returning writer/director McQuarrie also made Mission: Impossible – Rogue Nation which introduced “The Syndicate” led by Solomon Lane. This film rebrands The Syndicate as The Apostles. There is almost no reason for the name change. The villains could have continued with the previous name without any change to the overall story. In fact, keeping the same name would have proven less confusing.

So why the change? Without an explanation from McQuarrie or Cruise it’s almost impossible to know. It should be noted that the manifesto of The Apostles includes: “There cannot be peace without first, a great suffering. The greater the suffering, the greater the peace,” and calls for the annihilation of the Vatican, Jerusalem, and Mecca via the simultaneous deployment of three nuclear bombs by terrorists. Why anyone would believe that destroying those locations would bring the downfall of these world religions is never stated. This plot is described as necessary for peace in the minds of villains who have taken a Christian name to bring an end to Christianity. Odd isn’t it?  This is a weak, unnecessary, and unfortunate element of the film. Again, from a script writer’s perspective the purpose of this motivation is largely intended to provide the excuse for the film’s James Bond-esque action sequences and splashy travelogue style locations woven around the Cruise homo novis Scientology brand. On the one hand this is Mission: Impossible on the other hand this is brand Tom Cruise.

In an extensive interview on The Q&A with Jeff Goldsmith podcast McQuarrie, who won the Oscar for Best Original Screenplay with The Usual Suspects (1995), says that films are “written once on paper, once on film, and once in the editing room.” However, he also said he gets, “stuck on a blank page,” and that he needs boundaries, barriers, and obstacles to be creative and that Mission: Impossible – Fallout is a film made from the “edges inward.” The demands produced by Cruise in pre-production, those dangerous and thrilling stunt sequences, provided McQuarrie with “immovable objects” which “forced” him to be “creative.” McQuarrie who has previously worked with Cruise on Valkyrie (2008), Jack Reacher (2012), Edge of Tomorrow (2014), Mission: Impossible – Rogue Nation (2015), and The Mummy (2017) has grown to look at his relationship with Cruise as collaborative. “Cruise opens the door and I walk through it.” With comments like these it is fair to think about the ways in which Cruise influenced the making of Mission: Impossible – Fallout.

Overall the film delivers the expected product: a two-hours-plus long summer blockbuster action fest of cloak and dagger espionage chock full of twists and turns with a lot of heart pounding action. If anything, the movie suffers from one too many twists and double crosses.

A positive element is that Hunt and his IMF team are just as interested in saving one life as they are in saving the lives of millions. Yes, bad guys are dispatched along the way, but they are receiving their just desserts for a life of crime. And there is no subtlety in what Mission: Impossible – Fallout delivers. At one point when comparing Hunt with Walker CIA director Sloan says to Alan Hunley (Alec Baldwin), "You use a scalpel, I prefer a hammer." In truth, McQuarrie and Cruise give audiences a film that is all hammer and hardly any scalpel. But audiences should know what they are getting as the film’s advertising doesn’t hide what it is. Even the film’s opening credits include previews of all the main action sequences and set pieces. Mission: Impossible – Fallout is banking on audiences coming for the stunts and the action first and everything else, from character to plot, while it needs to make some kind of sense, is only along for the ride.