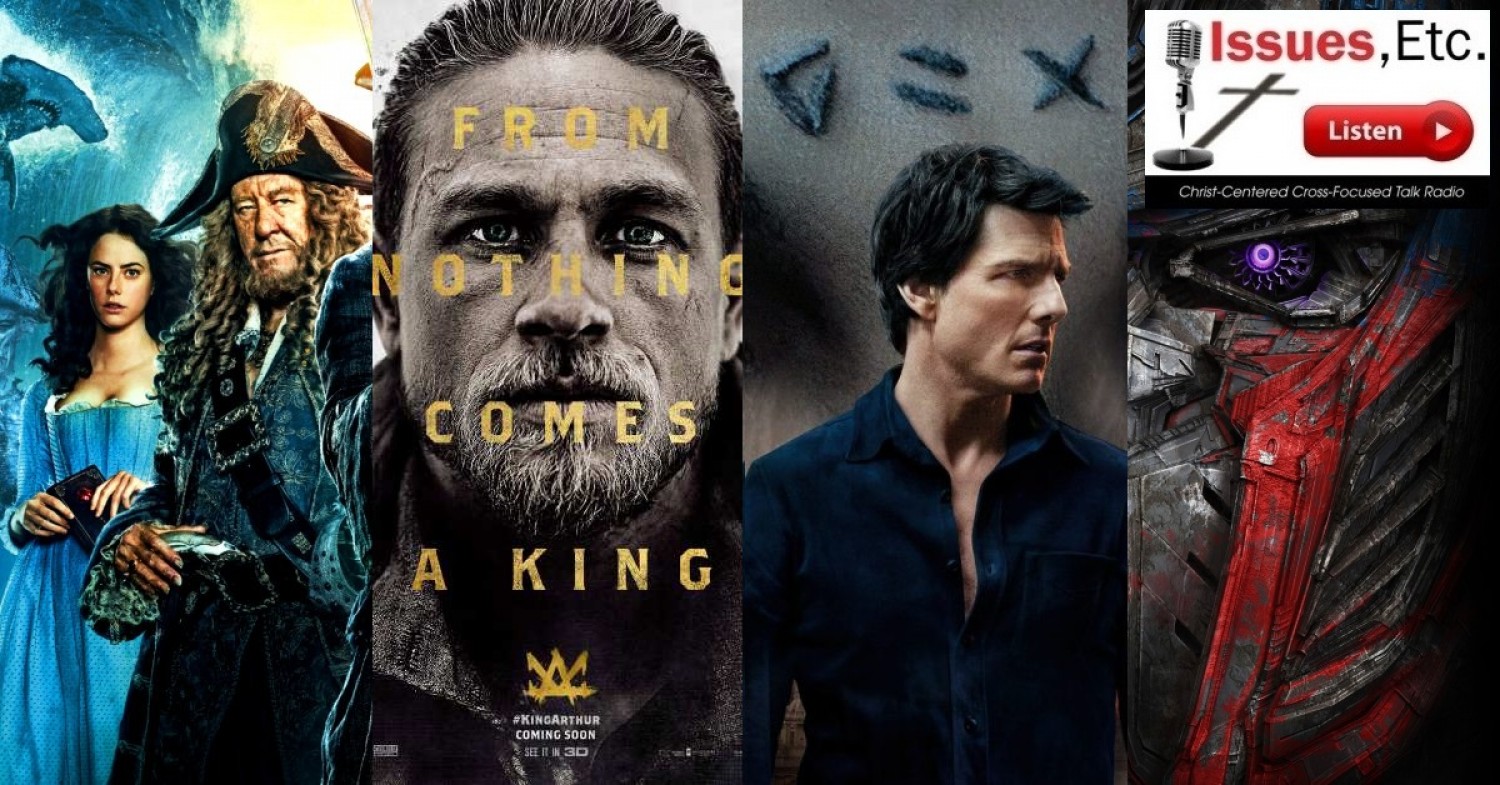 In this review Pastors Ted Giese and Todd Wilken talk about the enduring popularity of the King Arthur Legend/Myth and where a movie like Guy Ritchie’s King Arthur: Legend of the Sword (2017) fits into that tradition of storytelling when compared to other King Arthur films like Excalibur (1981). They also talk about the inclusion of blood sacrifice in the film selfishly perpetrated by the villain Vortigern (Jude Law) the brother of King Uther Pendragon (Eric Bana) who uses the blood sacrifice of his wife, and later his own daughter, to gain the help of evil forces to usurp the throne, first from his brother Uther and then to maintain the usurpation from his nephew Arthur (Charlie Hunnam) the rightful king. The film is essentially an origin story where viewers watch the reluctant streetwise, hustler and small-time criminal Arthur, who grew up on the mean streets of Londinium (ancient London, England) unaware of his pedigree, pull the sword Excalibur from the stone and fight his way to his rightful throne and crown in Camelot. As Arthur vanquishes his ultimate villain he says, "You created me, and for that I bless you. You make sense of the Devil.” This new Arthur film is filled with recognizable Arthur material but at the same time provide a different slant and perspective on the Arthur story.

In this review Wilken and Giese begin by talking about the Pirates of the Caribbean movies in general and note influences on the franchise like the Michael Curtiz’s swashbuckling films Robin Hood (1938) and The Sea Hawk (1940) staring Errol Flynn. One of the major differences between those older films and the modern Pirates of the Caribbean film is the inclusion of supernatural elements like zombies, witches, voodoo priestesses, cursed items and curses in general. This tongue-in-cheek series of films uses all of these supernatural elements as macguffins (plot devises) to provide a reason for the story. For example, in this film the plot unfolds because of the desire of the son of Will Turner (Orlando Bloom) and Elizabeth Swann (Keira Knightley), named Henry Turner (Brenton Thwaites), who seeks the help of Captain Jack Sparrow (Johnny Depp) to find the Trident of Poseidon which can break all the curses of sea and thereby rescue his father Will from the curse of the flying Dutchmen: A curse that keeps his mother and father apart from one another. No curse, no Trident of Poseidon, no story. A twist to the themes of supernatural objects and curses is the inclusion of science into the plot. Astronomy and navigational charting become important to the story but the ignorant 18th century pirates have to be convinced to believe in science with arguments like, “You don’t have to understand it you just need to believe in it.”

The bigger theme in the film is that of father’s and their children. Notable in that regard is the returning villain/anti-hero Captain Hector Barbossa (Geoffrey Rush) who has a couple of the most satisfying moments of the film largely because of the revelation that he has a daughter. When Barbossa discovers his long-lost (orphaned) daughter his love of looted pirate treasure diminishes and he recognises that his true treasure, the true object of his heart’s desire, is his daughter. Provided with an opportunity to protect her from death Barbossa sacrifices himself to save her and everyone else, but not before she asks him, “What am I to you?” His response “You are my treasure.” This may remind viewers of Jesus’ parable in Matthew 13:44, “The kingdom of heaven is like treasure hidden in a field, which a man found and covered up. Then in his joy he goes and sells all that he has and buys that field.” For Barbossa the discovery of his hidden treasure, his daughter, causes him to give up everything including his life to save her. In this way Barbossa becomes and unlikely symbol of redemption and love which points to God the Father’s love for His children, and Christ’s willingness to die a selfless death so other may have Eternal Life. Barbossa becomes both a symbol of redemption and in the vocation of fatherhood which he embraces the recipient of redemption. He dies a hero no longer the villain he was when originally introduced in Pirates of the Caribbean: The Curse of the Black Pearl (2003).

The Mummy is intended to kick-start (maybe jump-start) a cinematic universe for Universal Pictures which would be like the MARVEL or DC cinematic universes only instead of super heroes the Universal Pictures cinematic universe would be super monsters. The Mummy, Dracula, Frankenstein, Creature from the Black Lagoon, Dr Jekyll and Mr Hyde. Wilken and Giese talk about whether or not this is successfully pulled off or not. Comparing Alex Kurtzman’s The Mummy (2017) to The League of Extraordinary Gentlemen (2003) they talk about how in that case Sean Connery exerted too much influence on the project, and The League of Extraordinary Gentlemen lost its way, and how in this case there appeared too much emphasis on Tom Cruise and his brand which causes this new film to likewise lose its way. Viewers who like Tom Cruise won’t mind, but people looking for a Mummy movie like the ones that came before will likely be disappointed. They also discuss how resurrection is presented in the film and the theme of human blood sacrifice that crops up in this film too.

In this last review Giese and Wilken talk about the fifth instalment in the Michael Bay Transformers franchise Transformers 5: The Last Knight (2017) and how - news flash - truly horrible, horrible, horrible this new Transformers film turned out to be. A topic of discussion was how fatherhood and a strong father/daughter relationship had been a bright point in the previous Transformers film, Transformers: Age of Extinction (2014), and how this noble theme was essentially squandered in this new film even though the character of Cade Yeager (Mark Wahlberg), who had played the good father character in the previous film, returned in the same role to this new film. In the end Wilken and Giese agreed they could happily make this the last Transformers film review on IssuesEtc. In other horrifying news, Michael Bay claims there are scripts for 14 future Transformer films. Fans of the franchise may rejoice at that news while others will likely say: “Make. It. Stop!”