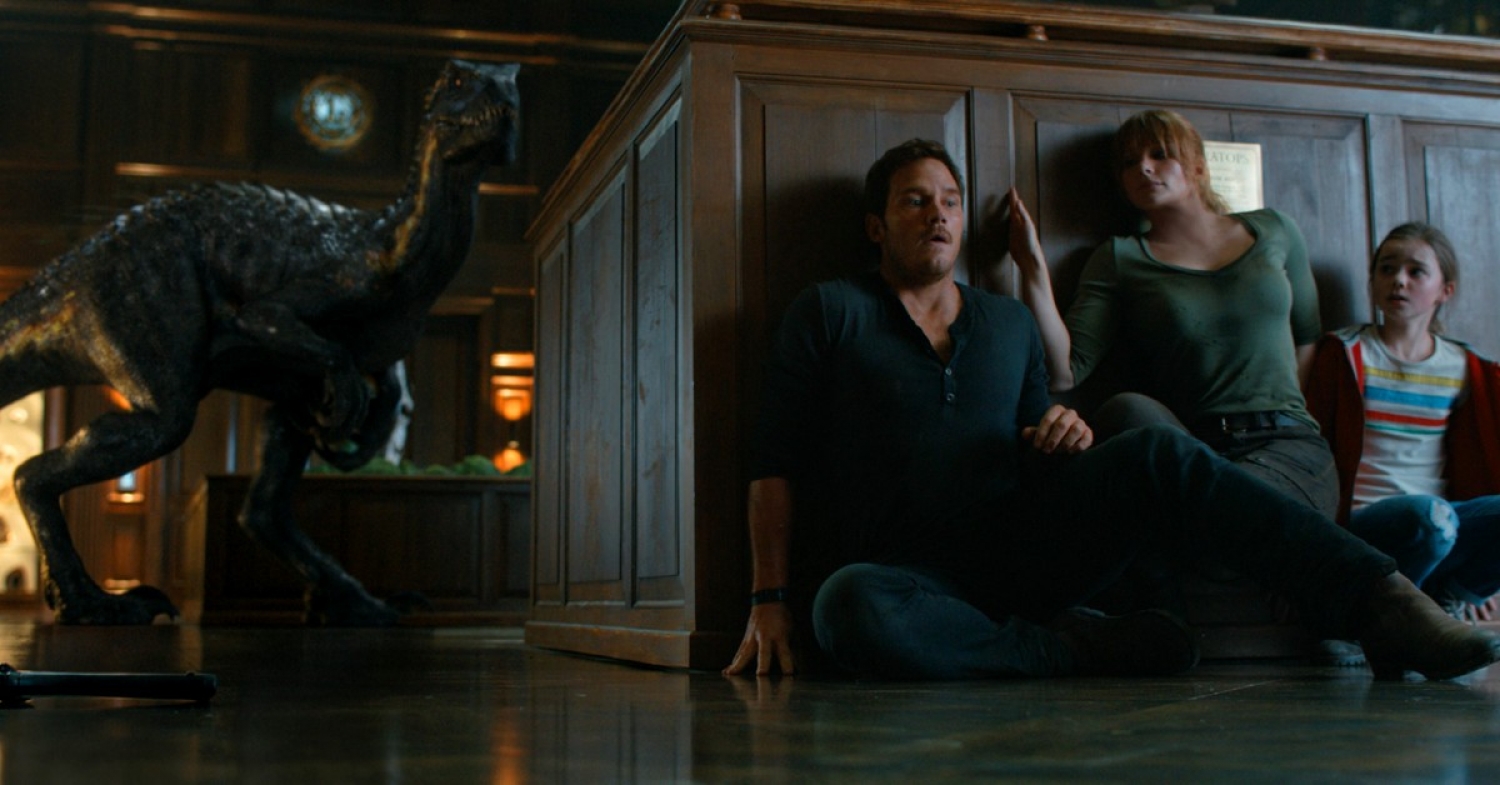 As mounting volcanic activity threatens to wipe out the remaining dinosaurs on the tiny island of Isla Nublar off the coast of Costa Rica, efforts are underway to rescue as many possible from a second extinction. The question is why? Is it for conservation, profit, scientific, or personal reasons? The private rescue operation brings back to the island the former Jurassic World theme park’s managing-operator-turned-dinosaur-activist Claire Dearing (Bryce Dallas Howard), and her romantic interest Owen Grady (Chris Pratt), the park’s former Velociraptor behavioural researcher. Along with Dearing’s colleagues, paleo veterinarian Zia Rodriguez (Daniella Pineda) and systems analyst Franklin Webb (Justice Smith) of the “Dinosaur Protection Group,” Dearing and Grady find themselves in danger as the rescue operation proves to be a criminal endeavour.

Bookending Jurassic World: Fallen Kingdom is the return of Ian Malcolm (Jeff Goldblum), a mathematician specializing in chaos theory. Appearing first in Jurassic Park (1993) Malcolm again provides his scientific/philosophical opinions, this time testifying before a congressional committee weighing government involvement in a potential rescue operation. The question is whether the dinosaurs should receive endangered species protection since their existence, or de-extinction, is the result of a private commercial endeavour. Malcolm believes it would be best for humanity to let them be naturally wiped out by the volcano due to the potential chaos that could ensue if they were allowed to become an invasive species in areas populated by humans, “These creatures were here before us. And if we're not careful... they're going to be here after. Life cannot be contained. Life breaks free. Life... finds a way.” When pressed by a congressman as to whether the volcanic activity could be “an act of God” the atheist Malcolm is quick to say that “God has nothing to do with it.” His greater fear is where genetic modification technology might lead if humanity continues down that path just because it can. In a rather fatalistic way he warns them that, “Genetic power has now been unleashed. You can't put it back in the box.” Basically, letting the dinosaurs die would mitigate future problems and at least slow down various dangerous and chaotic outcomes.

For a movie about genetic manipulation and scientific conservation of endangered/extinct species Jurassic World: Fallen Kingdom is a curiosity. First, it is rather agnostic about God and second, it’s very light on the idea of evolution. It seems disinterested in the “science versus faith” dialectic often pushed in pop-media. As a result, like Jurassic World (2015), this current addition to the franchise is not hard science fiction and shows only the thinnest veneer of actual science. In fact, the science in Jurassic World: Fallen Kingdom edges more toward the magic in Harry Potter! As a result, it has more in common with the giant ant film Them (1954) or the Amazonian dinosaur film The Lost World (1960) than with speculative hard science fiction films like 2001: A Space Odyssey (1968), The Andromeda Strain (1971), Gattaca (1997) or even films like Moon (2009) or Gravity (2013). The science in Jurassic World: Fallen Kingdom becomes nothing more than an excuse for flashy and impressive special effects. If science was riding shotgun in previous Jurassic Park films, in this film it’s gagged and tied up, kidnapped, and locked away in the trunk of the car. The other odd thing is that the film doesn’t really contain the kind of scientism audiences might expect. At its heart Jurassic World: Fallen Kingdom is a simple morality tale. Dinosaurs routinely devour the unjust, the corrupt, the greedy, and the selfish while protecting and helping the more well-intentioned characters. This flies in the face of Darwin’s theory of natural selection which, if taken at face value, should not be a respecter of civic righteousness. Are viewers expected to believe that dinosaurs—or any hungry carnivorous predator—are capable of recognizing virtue or can see into a person’s heart to know if they are good or evil?

To be fair, one “bad guy” dinosaur tries to eat the “good guys” but that dinosaur is clearly identified as a wicked evil laboratory creation of the unscrupulous Dr. Wu (BD Wong). On the flipside, the Velociraptor Blue, first introduced in Jurassic World (2015), is described as intelligent, empathetic, and compassionate—a dinosaur which will follow commands and respect a human as a pack leader because of its unique relationship with wrangler Owen Grady. On one hand, this anthropomorphism gives viewers a dinosaur imbued with noble human qualities, and on the other a twisted mirror image dinosaur imbued with the wretched wicked qualities of a fallen human nature. Therefore, these two dinosaurs emerge as active players in the morality tale and, like the other characters, the good dinosaur lives to fight another day and the evil dinosaur receives suitable and deserved comeuppance.

When the final credits roll it’s clear Jurassic World: Fallen Kingdom isn’t actively trying to deal with evolutionary biology, modern paleontology, or any other hard science. It simply can’t be bothered to preach their “gospel truth.” The film is about action, cool-looking dinosaurs, good guys and bad guys, and little else. If there is one hard science question with potential real-world application it has nothing to do with dinosaurs or theory of evolution; the film might be acting as a kind of Trojan horse for an empathetic appeal for human cloning. The film contains an important plot point involving the cloning of a dead person to give them a second crack at biological life but avoids the existential or metaphysical questions about what that means for the soul.

The media would have us believe Christians will be universally bent out of shape over any mention of evolutionary science in a film. Truth be told, many Christians likely don’t care one way or the other about what the scientific community thinks about dinosaurs. In fact, they may be just as blasé about the subject as Jurassic World: Fallen Kingdom appears to be. While some Christians are deeply invested in every nuance of every argument swirling around scientific ideas about the origins of life and paleontology, most Christians are probably more focused on a straightforward reading of God’s Word and struggling to love their neighbour! Most Christian viewers will have greater interest in the film’s morality play as they generally look at dinosaurs as one more part of God’s creation albeit one that has suffered the effects of the fall into sin that plagues all of creation. In the context of the film, Christians and non-Christians could easily see the dinosaurs standing in for modern animals in danger of extinction and in need of conservation. The stewardship of creation entrusted to humanity by God comes into play in Jurassic World: Fallen Kingdom alongside the fact that noble causes also attract unscrupulous, unvirtuous, and ignoble characters prone to greed and abuse of power.

Interestingly, the film’s central protagonists Claire Dearing and Owen Grady don’t get off the hook for their past transgressions. Their original sins are literally pointed out to them by the snake-in-the-grass villain Eli Mills who is working for a terminally ill Benjamin Lockwood (James Cromwell), the estranged business partner of John Hammond (Sir Richard Attenborough) who together founded InGen the company that cloned dinosaurs from ancient DNA. In a case of the “pot calling the kettle black,” Dearing is called out by Mills for permitting and encouraging the production of the genetically modified hybrid T-Rex in Jurassic World, Indominus-Rex, because she wanted a new theme park attraction. Grady is likewise called out for his behavioural work with the Raptors. Addressing Grady, Mills asks, “The man who proved Raptors can follow orders. You never thought how many millions a trained predator might be worth?” Mills calls Dearing and Grady the parents of the new world making them a kind of Adam and Eve. Their past sins are revealed to be the very fountainhead of the chaos predicted by Ian Malcolm. They may have been more or less well intentioned in their choices, but their good intentions are paving a road to hell. However, they have their moment of redemption. When presented with an opportunity to sacrifice the remaining dinosaurs in their care for the good of humanity, they chose to let them die. They make the right choice for public safety, but it is taken out of their hands and events unfold in a way that ensures another franchise sequel.

For all its flash and dazzle Jurassic World: Fallen Kingdom lacks depth. The film is a grade-A summer blockbuster with its industrial design and special effects, but it’s safely at home in the realm of the B-movie “creature feature” and the acting is only slightly above par. Bryce Dallas Howard and Chris Pratt are fine in their returning roles and it’s fun to see Jeff Goldblum for his small part, but the real stand out is systems analyst Franklin Webb played by Justice Smith. He brings a surprising amount of energy and awkward comedy to his role. Overall, Jurassic World: Fallen Kingdom is not the best in the Jurassic franchise, but it will provide a couple laughs and jumps to accompany that hard to pass-up over-priced popcorn.