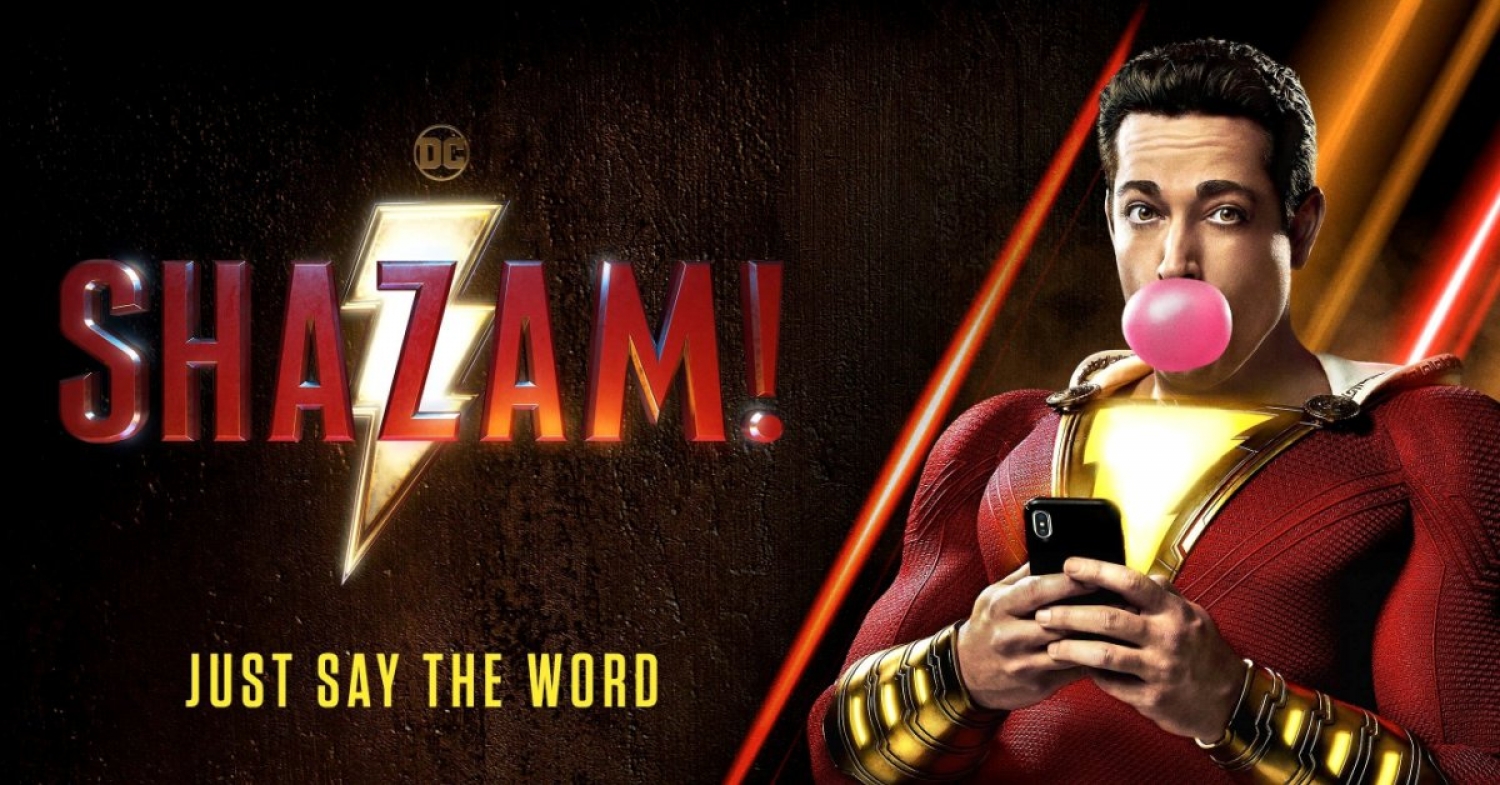 Listen here for audio of radio interviews about films from a Christian perspective with Pastors Ted Giese and Todd Wilken on IssuesEtc.org where Christianity meets culture. This review contains some spoilers.

Shazam! from DC Entertainment/Comics is the follow-up to Aquaman (2018). On the surface it’s a silly fun little film about a teenage boy who gains mystical super powers from a wizard (Djimon Hounsou). Think wish-fulfilment fantasy. Like Aquaman it’s about as fun and fizzy as a soft drink and likely as nutritious and healthy!

Teenaged foster kid Billy Batson (Asher Angel) receives powers that transform him into an adult super hero Shazam! (Zachary Levi). Batson, a wisecracking loner, is constantly running away from foster homes seeking his mother (Caroline Palmer) whom he lost in a crowd at a street fair as a child. Focused on this quest Batson failed to fit in anywhere or with anyone. When placed in a new “last chance” foster home under the care of Rosa (Marta Milans) and Victor Vasquez (Cooper Andrews) Batson is again faced with the challenge of fitting in. The difference is that Rosa and Victor were also foster kids and work to make a family for the kids they foster. Batson shares a room with Freddy Freeman (Jack Dylan Grazer) a comic book and super hero fan who refers to himself as “a disabled foster kid.” Freeman is the first to learn of Batson’s super identity and helps him understand and test his super powers. There are also other foster kids in the Vasquez home: Darla Dudley (Faithe Herman), Mary Bromfield (Grace Fulton), Eugene Choi (Ian Chen), Pedro Peña (Jovan Armand). They all take a liking to Batson and welcome him into their family.

Batson as Shazam! doesn’t really know what to do with his new-found power. Had he paid closer attention to what the wizard who gave him his powers said to him he may have noticed that Shazam is an acronym: “The wisdom of Solomon, the strength of Hercules, the stamina of Atlas, the power of Zeus, the great courage of Achilles and the speed of Mercury. You must never call upon this power except in the service of right.” From his arcane lair the aged wizard, the last of the seven-member Council of Eternity, had sought a champion to be his replacement; someone who is pure of heart. Batson, although not perfectly “pure in heart”, is certainly more pure in heart than the failed candidate Thaddeus Sivana (Ethan Pugiotto). His covetous envy and greed disqualified him from being the wizard’s replacement in the council’s fight against the seven deadly sins of pride, envy, greed, lust, wrath, gluttony, and sloth which are demonically personified in the film. As an adult Sivana, now Dr. Sivana (Mark Strong) still seeks the powers of Shazam and becomes Batson’s enemy repeatedly attempting to steal the powers with the aid of the seven deadly sins. A large portion of the film’s final act focuses on a physical confrontation with Dr. Sivana and the seven deadly sins.

Shazam! is a film awash in religious and esoteric details and subject matter of which viewers may want to take note. Christian viewers in particular may want to consider that characters like Hercules, Atlas, Zeus, Achilles, and Mercury from whom Shazam gets his mystical magic powers are all part of Greco-Roman paganism. But wait! Wasn’t Solomon mentioned first? Yes, but while “the wisdom of Solomon” sounds biblical (King Solomon was King David’s son and the builder of the Temple in Jerusalem and there are accounts of his wisdom in the Bible like one in 1 Kings 3:16-28 where he helps resolve a dispute between two prostitutes over the claim of motherhood of a baby boy) the wisdom of Solomon presented in this film is anything but biblical. This Solomon is magical more in keeping with the Solomon of Jewish Kabbalistic mysticism or the Quran or the 14th or 15th century Italian book of magic spells and invocations "The Key of Solomon," falsely attributed to Solomon, which are favourites of Freemasons and other occultists. In Shazam! Batson uses these “powers” of Solomon for clairvoyance and presumably for the binding of demons. Does that sound a bit too dark for young kids? Most viewers won’t spend much time considering these points because the film generally comes across as goofy and immature. Also, the film’s more obvious theme is wrapped up in the lesson Batson learns that “it’s better not to go it alone through life,” and “if your real family lets you down you may find a new family more faithful then your biological family.”

On one hand this is positive; not everyone has a good family and many Christians know the joy of finding brothers and sisters in Christ Jesus in their local congregation and among fellow Christians. However, on the other hand the film reflects modern society’s notion that family is less about biology and more about bonding between like-minded people.

There is another surface positive. While many of these kinds of films champion the idea that anyone can become a hero if they simply meet their intrinsic potential to do so, Shazam! does not teach this idea. Batson is given the power to be a hero from outside himself and discovers he can’t win his fight with Dr. Sivana and the demonic seven deadly sins on his own. He needs the other kids in his foster family who also end up endowed with the power of Shazam! Together they set things right and Batson finds the family he didn’t realize he was looking for.

But there is a flip side to this positive family theme. The wizard Council of Eternity has seven members as does its enemy the seven deadly sins. What this means is that the film at its core has a kind of yin and yang, an equally matched and contrasting balance between light and dark, good and evil etc. This idea in near eastern and western religious thought is often conveyed in the Gnostic Christian heretical dualism of Manichaeism in which good and evil are equally pitted against each other. Is this a stretch? Not really. The dualism of Manichaeism is regularly portrayed as a struggle between a spiritual world of light and an evil material world of darkness. In Shazam! the wizard Council of Eternity has a lightning bolt as its symbol and a bolt of lightning is present each time Batson says “Shazam” which turns him into the magical super hero. Conversely, the demonic seven deadly sins are often presented as encased in stone or stone-like in appearance.

Why do film makers and writers keep going down this road? There are two reasons that sometimes overlap. First, this yin and yang kind of Gnostic dualism is low hanging fruit for creating dramatic tension. “Who will win? The good guys or the bad guys? They seem equally matched!” The second reason is that the filmmakers may actually believe good and evil are equals. It’s hard to say outright without a public admission on the part of the writers or the director. Shazam is a pop cultural property that has been around since the 1940s when the character was also called Captain Marvel before legal disputes forced DC Comics to drop the name and settle on Shazam! Sometimes faithfulness to a source material means the filmmakers are simply working to portray what was originally

presented and they may not believe in the underpinning ideologies or beliefs. Regardless, this kind of good and evil dualism is present in Shazam! as it is in countless other films and Christian viewers will want to take the opportunity to contemplate this and/or address it with kids who see the film. Yes, good often wins … or does it? Evil in these kinds of dualistic films is almost always left licking its wounds in the dark waiting for another crack at victory and the struggle continues. For Christians however, outside fictional stories like these, life is much different. There may be many battles with evil along the way but Christ Jesus won the victory at the cross of Good Friday and the empty tomb of Easter morning. In Christianity God and the devil are not equally matched and there is no question about who has the victory! Perhaps this is seen as boring when it comes to developing dramatic tension in fiction, yet for Christians it is the source of ongoing comfort in life. Christian families will want to take the opportunity to look at Scriptural passages like the war in heaven as depicted in Revelation 12:7-17.

Keen observers may notice that while there are seven thrones in the Council of Eternity’s magic lair, only six members of Batson’s Shazam!-foster-family are endowed with magical powers. Where is the seventh? Perhaps this will be answered in a sequel. Even if there isn’t a sequel Shazam will certainly show up in future DC Comic films and when they add him to the Justice League he will likely serve the role of jester in Superman/Batman/Wonder Woman’s court.

With some frightening and crass moments Shazam! is too adult for small children and too immature for most adult audiences. However, if director David F. Sandberg, Warner Bros, and DC Entertainment were shooting for an audience of young teenage boys and DC comic book fans then they have it about right. It’s not a film with broad appeal but its target audience will enjoy it!