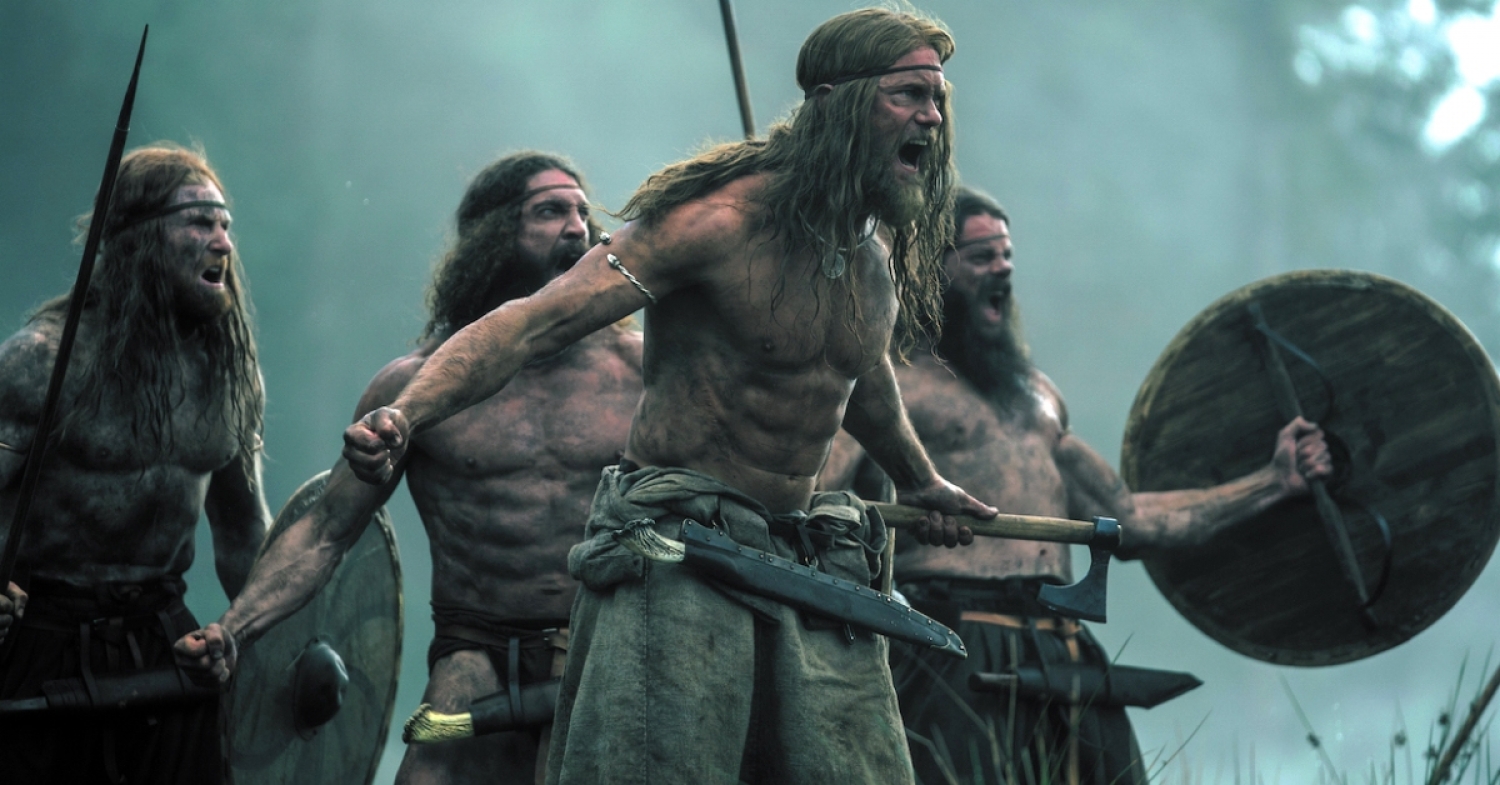 Amleth (Oscar Novak), a young Viking prince, witnesses the murder of his father, King Aurvandil War-Raven (Ethan Hawke), by his uncle Fjölnir (Claes Bang) who then takes Amleth’s mother, Queen Gudrún (Nicole Kidman), as his own. After narrowly escaping Amleth vows, “I will avenge you, father. I will save you, mother. I will kill you, Fjölnir.” Years pass and an opportunity arises for an older, stronger, accomplished warrior berserker, Amleth (Alexander Skarsgård) to fulfil his vengeful vow setting him on a mythical epic path of violence and self-discovery.

Set in 10th century northern Europe The Northman is director Robert Eggers’ third film and this story of vengeance is bigger in scope and scale than his previous outings: The VVitch: A New-England Folktale (2015) and The Lighthouse (2019). Here Eggers isn’t dealing with early 17th century Puritan-era witches or late 19th century mermaids playing on the minds of isolated lighthouse workers. With The Northman he’s diving feet first into the world of Pagan Norse mythology replete with shamanic visions, Valkyries, and ghostly apparitions alongside prayers and laments to Odin the Alfaðir and Freyja his consort.

On the surface the set-up — boy witnesses attack on his family and returns as a man to get vengeance on the perpetrator — for The Northman may sound a bit like John Milius' Conan the Barbarian (1982), a film Eggers admits was an inspiration, but it isn’t the only inspiration. In fact, if the name Amleth sounds familiar and the story of a northern European prince forced to face the death of his father at the hands of his uncle who then marries his mother likewise sounds familiar, it will come as no surprise that Eggers has built his film on the 12th century chronicle Gesta Danorum (History of the Danes) by Saxo Grammaticus the same Danish tale that inspired William Shakespeare's Hamlet (1599-1601).

For the most part Shakespeare's Hamlet has been portrayed as a sullen introspective philosopher-prince feigning madness to stay under his uncle’s radar while wrestling with the knowledge of how his father was murdered. The play is a tragedy and so is The Northman, but Eggers’ Amleth, while certainly brooding, is a more dangerous and potent character. The clever twist Eggers brings into the story via Conan the Barbarian is Amleth’s escape and return which means the man who shows up on the doorstep of Fjölnir and Gudrún is not recognizable as the son and nephew who fled in the night years earlier. His true identity isn’t concealed in faux madness, yet he still lives under their noses without them knowing his plan: “I will avenge you, father. I will save you, mother. I will kill you, Fjölnir.” Even Fjölnir’s guard who tried to catch and kill Amleth as a boy, Finnr The Nose-Stub (Eldar Skar), doesn’t recognize the man as the boy who bit his nose off the night King Aurvandil War-Raven was murdered. One more detail to note: in The Northman Ophelia, Hamlet’s doomed love, is replaced by Olga of the Birch Forest (Anya Taylor-Joy) a Pagan Rus slave who acts as confidant and fellow conspirator.

Under normal circumstances The Northman should be a giant success, an authentic Viking movie based on a real Danish tale that inspired William Shakespeare's popular play Hamlet; a vigorous revenge story with hints of Conan the Barbarian drenched in the same kind of mysticism and magic. It checks off many of the boxes that should spell a big box office. But the world is recovering from a global pandemic and the film industry, especially its theatre attendance, has not fully rebounded. Then there’s the R-rating which generally makes for a smaller audience. Also, the film has predictably raised the ire of critics on the political far left who in their estimation see White Supremacy with the film’s lack of diversity, inclusion of traditional gender roles and positive portrayals of procreation and masculinity.

Here is where the genuine ‘hipster’ desire for authenticity in art production runs headlong into ‘wokeism.’ Eggers strives for an authentic true to historical period retelling of a Viking era story to the point of engaging Neil Price a professor in the Department of Archaeology and Ancient History at Uppsala University, Sweden, tapping into his expertise on Viking-age Scandinavia, therefore popular revisionist ideas focused on bringing representation for the sake of representation into the story don’t really stand much chance. That said, historical revisionism can certainly be found in academic settings. Yet if there was a character of let’s say African descent in a film like this, they would more than likely be slaves and Eggers chose not to include this sort of representation. In this film the slaves are Rus (Russian) and Pict (Scottish). In fact, the Scottish actress Kate Dickie who was also in Eggers’ film The VVitch along with Anya Taylor-Joy and Ralph Ineson, plays the slave Halldóra the Pict. With its focus on the practice of enslaving neighbouring Europeans a film like The Northman also somewhat complicates the general North American narrative around slavery that narrowly focuses on the period leading up to the American Civil War (1861-65) and the Emancipation Acts of 1834 (British Colonies) and 1863 (USA). (For a film that dives into that time period viewers might want to check out Edward Zwick's Glory (1989), Steven Spielberg's Amistad (1997) or Steve McQueen’s 12 Years a Slave (2013).) That Eggers doesn’t sidestep the Viking custom of taking slaves for their own use and for tribute as part of the spoils of their raids is another example of his desire to accurately present the world in which the story is set.

While this film may be refreshing to some audiences who feel particularly beaten down by the constant push to muddy the waters of history with unsubstantiated and outlandish inclusion of modern leftist ideas of racial, gender, and sexual representation, it’s also important for audiences to keep things in perspective. The culture and history displayed in The Northman is not great or praiseworthy; it is brutal and unyielding, full of violence and people trafficking and while they don’t show gratuitous instances of rape it is implied. These are certainly unvarnished Vikings with the goal of portraying them authentically which includes scenes of roving (Viking raids). This is also a film filled with Scandinavian Shamanistic Paganism and bloody Pagan rituals. Both King Aurvandil War-Raven’s fool/shaman, Heimir The Fool (Willem Dafoe) and the Rus Witch/Seeress (Icelandic singer-songwriter Björk), provide Amleth with portents of his dark path to vengeance.

This is by no means a Christian film and Christians are only mentioned a couple times. Among the Viking slaves are some Christians and they are suspected of perpetrating a particularly bloody violent crime where some Viking men were murdered in their sleep, dismembered, and nailed to the wooden side of a building arranged in the shape of an animal because as one of Fjölnir’s men says, “their God is a corpse nailed to a tree.” An interesting thing to think on here in relation to this characterization of Christ Jesus and His crucifixion is the sort of second-hand, rudimentary, and skewed understanding of the Vikings who are on the cusp between their old Pagan ways and beliefs and the continual world-wide spread of Christianity first commanded by the risen Lord Jesus at His ascension almost a thousand years earlier (Matthew 28:16-20). In this case Eggers depicts people who likely have a poor understanding of Christianity viewed through the lens of their Pagan worldview who are only hearing about Jesus from poorly educated Christians whom they have ripped from their communities and enslaved. Historically, Vikings also enslaved monks from monasteries who potentially would have been better educated, more knowledgeable, and perhaps more skilled at spreading the Gospel of Christ Jesus. This however is not part of the story Eggers is telling.

Also, while a film like The Northman may be thought-provoking and engrossing, Amleth is not a man that Christians — or anyone else for that matter — would want to emulate. Remember, this is a tragedy. There may be some question of Amleth’s vocational responsibility to provide justice for the unjust murder of his father, but even King David in the Bible put vengeance in the hands of God (Psalm 10:15). Likewise the almighty Christ Jesus — who could have avenged Himself or sent in a myriad of angels to fight on His behalf (Matthew 26:53) — while being crucified famously prayed, “Father, forgive them, for they know not what they do,” (Luke 23:34), and both the writer of the Letter to the Hebrews (Hebrews 10:30) and Saint Paul in his Letter to the Roman Christians (Romans 12:19) quote Deuteronomy 32:35 when they explain God’s attitude towards vengeance, “Vengeance is Mine, I will repay.” In fact, in that Romans 12 passage Saint Paul writes, “Beloved, never avenge yourselves, but leave it to the wrath of God, for it is written, ‘Vengeance is Mine, I will repay,’ says the Lord.” Therefore, the vocationally relevant questions to ask are these: Is it my responsibility to do the thing I’m about to do; Is it my place to pass judgment in this matter; Is it my place to punish the wicked; Am I right in my assessment of the situation; Could I be wrong in my judgment; What would be the outcome of my actions? Amleth faces some of these questions as his story unfolds and there is wisdom in asking them.

With much of the film shot in Northern Ireland and the Icelandic community of Akureyri and the glaciers in Vatnajökull National Park in East Iceland, Eggers delivers a visually arresting film full of stark yet beautiful landscapes seemingly as hard and unyielding as the people who inhabit The Northman. Had Eggers also had everyone in The Northman speak in the languages of the time it would have comfortably found a home alongside Mel Gibson films like Apocalypto (2006) and The Passion of the Christ (2004). As it stands, The Northman shares the same desire to depict the time period authentically and honestly including the beliefs, customs, practices and brutalities of life within the reach of the dipping oars of 10th century Viking longboats in northern Europe.

Providing the film’s investors eventually make a return on their investment, the quality of the filmmaking alone should ensure Eggers continues directing films. The Northman, like Eggers’ other films, presents an interesting departure from the common fare. That said, it won’t likely be embraced by a wide audience even though to date it has many more of the elements necessary to capture that wide appeal. The movie sub-genre of Viking-age Scandinavia is rather diverse ranging from lighthearted kid’s movies like the How to Train Your Dragon franchise (2010, 2014, 2019) to the fanciful MARVEL Thor films (2011, 2014, 2017, 2022) to more gritty adult entries like Valhalla Rising (2009) starring Mads Mikkelsen or the History Channel’s Vikings TV show (2013-2020). So if The Northman looks too authentic, too violent, or too Pagan, consider checking out something like The Vikings (1958) starring Kirk Douglas, Tony Curtis, Ernest Borgnine and Janet Leigh.