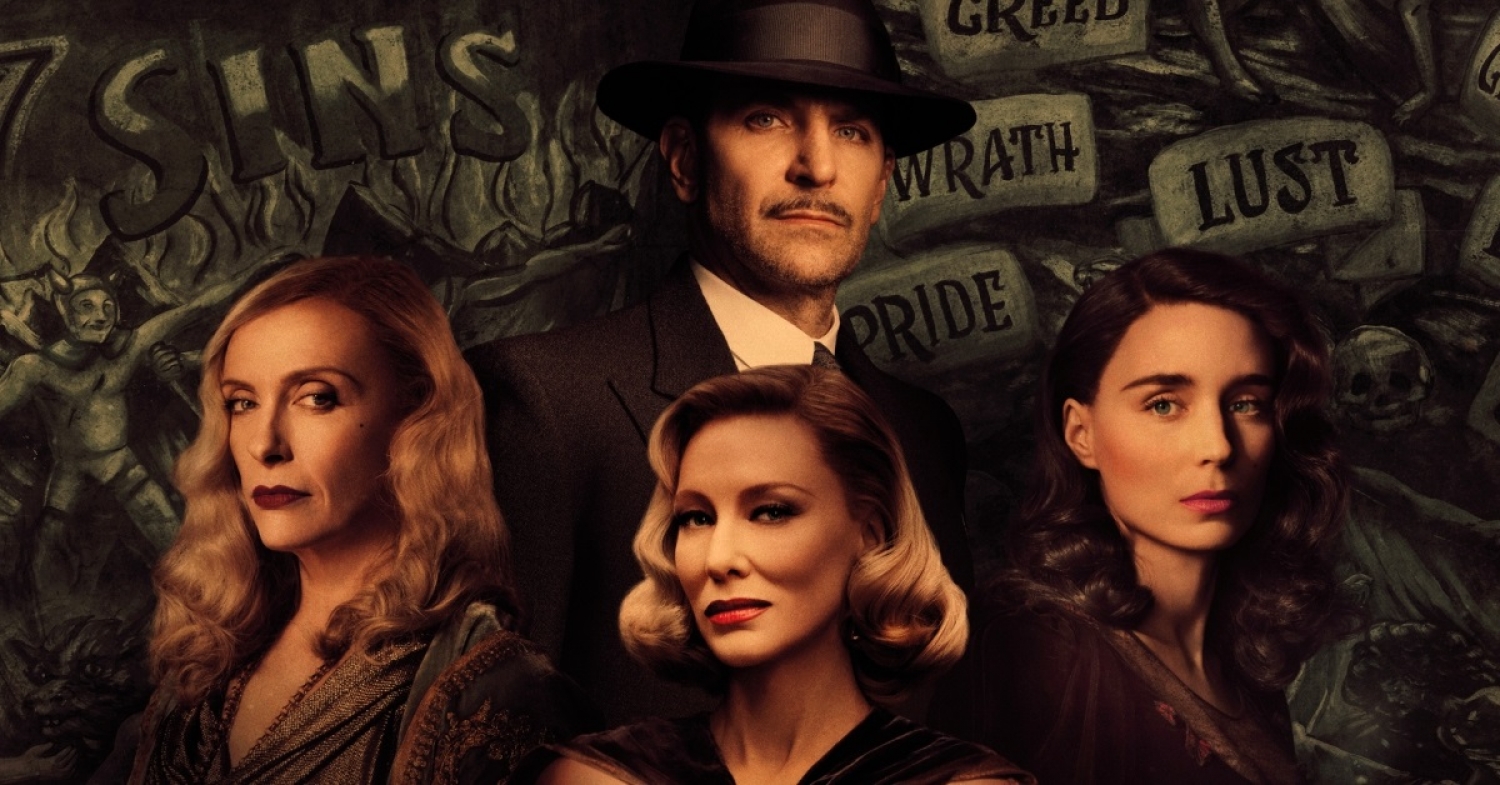 Stanton “Stan” Carlisle (Bradley Cooper) disposes of a canvas-wrapped body in a hole made by prying up floorboards, sets the farm house on fire, and walks away. Presumably on the lam—although no one seems looking for him—he joins a traveling sideshow and enters the world of hucksters, grifters, freaks, and geeks in pursuit of personal reinvention. While climbing his way up into respectable society as a mentalist he discovers respectable society is not so respectable. Before long he faces hard truths about who he truly is. This existential noir thriller by writer/director Guillermo del Toro is an adaptation of William Lindsay Gresham’s 1946 novel Nightmare Alley previously adapted in 1947 by director Edmund Goulding starred Tyrone Power as Stanton.

Heavy on style and with a keen eye for detail Guillermo del Toro provides a stylish, if sometimes unpleasant, ride though the rough world that embodies the adage “there's a sucker born every minute,” where almost everyone is working some angle to get ahead. Moving from day labourer, to carnie, to assistant, to talent the charismatic yet broken Stanton finds every way possible to take advantage of his situation. He’s a quick learner and soon finds himself assisting Clem Hoatley (Willem Dafoe) who runs the geek show where a derelict down-on-his-luck man is physiologically manoeuvred into biting the heads off chickens in front of a paying crowd. Hoatley knows this bit of horror appeals to the base nature of his paying customers who want to feel better about themselves by looking down on someone else. Stan wonders how Hoatley manages to convince someone to be a geek. Hoatley explains that the geek must think it’s only temporary. The truth is there are lines that once crossed haunt a person and as Stan says, “Sometimes you don't see the line until you cross it.”

Stan floats from helping Hoatley to assisting fortune tellers Zeena the Seer (Toni Collette) and her alcoholic paramour partner Pete (David Strathairn) who show him the ropes of their work. But their lies and tricks come with a warning when Pete says to Stan, “When a man believes his own lies, starts believing that he has the power, he's got shuteye. Because now he believes it's all true. And people get hurt. Good, God-fearing people. And then you lie. You lie. And when the lies end, there it is. The face of God, staring at you straight. No matter where you turn. No man can outrun God, Stan.” Stanton isn’t only receiving warnings from the likes of Zeena and Pete it seems at every turn he is confronted with warnings from the schlocky “House of Damnation” fun house hall of mirrors facade emblazed with the words “Examine They Self Sinner” to the curiosity cabinet style formaldehyde Cyclops baby nicknamed Enoch who purportedly killed his mother in childbirth hinting at Stan’s own dark history.

A central theme in the film is truth and lies. The phoney medium and the carnival sideshow fortune-teller engage in elaborate falsehoods to dupe people out of their money seemingly of their own accord. On the surface this appears an honest exchange but may as well be pick-pocketing. It’s all predicated on lies and playing on people’s insecurities, troubles, griefs and heartaches. For each character in the film there are the lies they tell others to get ahead in life and the lies they tell themselves. Central to this is Stan who is repeatedly warned not to believe his own lies. Deep down these warnings are calls to repentance which he either ignores or outright refuses. This becomes crystal clear when Stan leaves the sideshow and moves to Chicago with fellow performer Molly Cahill (Rooney Mara) to try his hand at the big time. After a couple of successful years Zeena the Seer and a couple of the other performers visit. Zeena does a tarot card reading with three cards for Stan in which the “The Hanged Man” card is played. She sees the reading as a warning that he’s on a bad path, “downfall, impending danger, an urgent choice.” Stan who’s rather happy with how things are going for he and Molly rebuffs Zeena saying, “you said so yourself, ‘There’s no such thing as bad cards,’ remember? Just depends on what you do with it” before flipping the card around saying, “I fixed it.” This exchange with the tarot card reading foreshadows the end of the film.

The novel’s author William Lindsay Gresham provides a definition of the “The Hanged Man” in his preface to Charles Williams’ book The Greater Trump: “The Hanged Man. Renunciation of self is the greatest triumph; the long battle with man’s untaught impulses and self-will; sacrifice leading to the secret at the heart of the world.”[1] Personally flipping the card over is a rejection of the warning revealing a self-centred egotism that demonstrates Stanton believes the lie of his phony success. Thinking he can personally fix all his problems is the lie he truly believes giving him the shuteye Pete warned him about and it eats him alive. He is an unrepentant murderer, thief, adulterer, and liar. He believes he’s justified in all he does because he’s cleverer than everyone else and deserves better than the hand life has dealt him.

What should Christians make of this story? It is certainly a cautionary tragedy showing the delusional attitude of a wicked man trapped in his sinful ways. The film also gives an honest portrayal of the world of fortune telling and mediums showing it is mostly clever tricks and lies, cold readings, and fishing for common details, that can be used to empty pockets. It likewise shows that these things have a dangerous spiritual aspect. The supernatural danger doesn’t come with flashy special effects but is certainly demonic in nature. For the unprepared viewer the film could be a hidden snare, a sort of apologetic for fortune telling because within the story the tarot card reading is validated. Christians should remember how Scripture warns against becoming involved with the occult, “a man or a woman who is a medium or a necromancer shall surely be put to death. They shall be stoned with stones; their blood shall be upon them” (Leviticus 20:27). Dabbling in the occult is dangerous business. In the film several people meet their deaths in unpleasant and shocking ways because of their involvement.

The final warning of “The Hanged Man” comes from Zeena as Stan is plotting to land a particularly big fish—the wealthy industrialist Ezra Grindle (Richard Jenkins)—who is guilt-ridden over the death of Dory a woman from his youth. Stan plots to rope Molly into pretending to be Grindle’s lost love in a sort of séance. This lie of “necromancy” has dire consequences. Both Pete and Zeena have warned Stan to never do a “spook show” because they present the lie of false hope. Grindle proves more dangerous than Stan estimates and when he sees through the ruse everything spirals out of control.

With Stanton Carlisle director del Toro gives the audience a character study of a man so bent on running away from his past and down a path of self-improvement that he becomes willfully blind to the dangers he faces by thinking himself clever and enlightened while walking headlong into the darkness of nightmare alley. At every turn Stan’s success proves counterfeit; every dead body he steps over, every back he stabs, every rung of the ladder he grabs on the way up is more tragic and dangerous than the last. For example, Stan could only identify Grindle as a “mark” with the help of the psychologist Dr. Lilith Ritter (Cate Blanchett) who describes her own work as finding out what someone is afraid of then selling it back to them; something she does with Stan even after telling him that is what she does. Both Stanton and Lilith play each other, seeking leverage for their personal gain. Their toxic relationship is all lies, adultery, and blackmail asking the question: who is playing who? By the end of the film it’s clear the double-crossing femme fatale Lilith is even more dangerous than Stan and having the upper hand she directly contributes to his final fall. He fails to see how he’s being taken because the more confident he feels, the more he believes his own lies, the more risks he takes, and the more easily trapped he becomes.

When Stanton’s con moves into a phoney “communication with the dead” scam they break more than the Eighth Commandment against bearing false witness; they wander into breaking the Second Commandment too as the final resting place of the deceased is the province of God alone (Ecclesiastes 12:7). While the 1947 adaptation of Nightmare Alley makes it clear that dragging God into such a scam breaks the Second Commandment, del Toro goes a different direction. The apex of Stan’s interactions with Grindle concerning his dead love moves into the area of confession and absolution. Stan presses Grindle to confess his sins including his part in Dory’s death but in the process discovers Grindle has more blood on his hands than he’d imagined. Christians will note that a true confession of sin has two parts: first, the person confesses their sins, and second, they receive absolution— forgiveness—from the pastor as from God Himself, not doubting, but firmly believing that by it their sins are forgiven before God in heaven.[2] Stanton is no pastor, nor is he a brother Christian; this is one more way he provides false hope. In an attempt to rob Grindle blind by setting up a “spook show” and goading him to confess his sins with no chance of forgiveness Stan leaves Grindle with nothing.

For anyone finding the story compelling yet also on the fence about watching del Toro’s brutally violent Nightmare Alley consider checking out the 1947 version. It is a comparatively gentler exploration of these same themes. del Toro’s film is a more visceral depiction of the fact that a person can’t outrun themselves because eventually they will catch up to themselves and when that happens reflective viewers may wonder where they can find hope. The Christian answer is not found in the individual but in the person of Christ Jesus; that’s where true forgiveness is found. In a rather fatalistic way Nightmare Alley also says that a person cannot find their salvation in their own actions especially if they don’t take to heart the warnings placed in front of them. While not revisited at the end of the film viewers will want to think back on what the drunk Pete says when he was warning Stanton: “No matter where you turn. No man can outrun God.” For Christians this is comforting; for those relying only on themselves the prospects of this being true are potentially harrowing.

Does the film reveal who Stanton disposed of at the beginning of the movie? Yes. Was that the line Stan crossed without knowing it or is the film’s last moment the line? Or did he cross a hundred lines along the way without knowing it? Christian viewers should consider the difference between knowing God’s law and believing it. Again, this is a cautionary tale of repentance forestalled and unheeded where life without repentance and forgiveness is truly depicted as a nightmare.