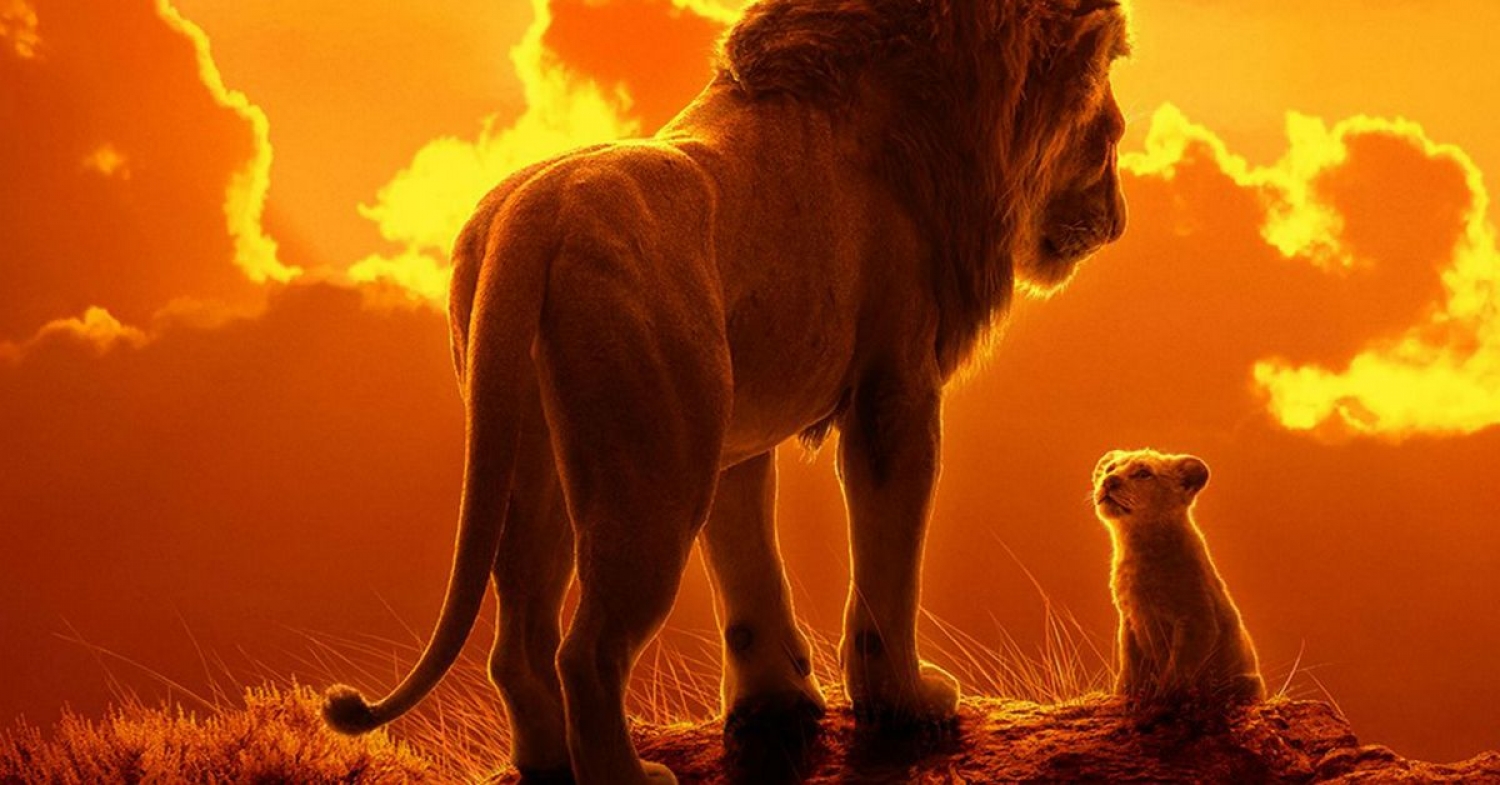 “The circle of life” unfolds on the African savannah with the birth of Simba (JD McCrary/ Donald Glover) to the mighty king of the jungle Mufasa (James Earl Jones) and his queen Sarabi (Alfre Woodard). Lurking in the shadows is Mufasa’s brother Scar (Chiwetel Ejiofor) who, with Simba’s birth, is no longer first in line to the throne. The manipulative Scar murders his brother Mufasa with the help of a clan of hyenas, led by Shenzi (Florence Kasumba), Kamari (Keegan-Michael Key), and Azizi (Eric André), by sparking a stampede of wildebeest. Scar convinces Simba that Mufasa’s death was the lion cub’s fault and the prince runs away afraid to face his mother and the rest of the lion pride. With Mufasa dead and Simba presumed dead, Scar becomes king of the lions and along with the hyena clan despoils the savannah’s delicate balance through overhunting. Meanwhile, Simba grows to maturity and with the help of his friends decides to return home to confront Scar, reclaim his rightful place as king of the lion pride, restore the delicate balance of the savannah, and ensure “the circle of life” is unbroken.

The Lion King: Live Action which again boroughs heavily from Shakespeare’s Hamlet generally appears to follow closely the award-winning 1994 animated film The Lion King even reproducing some sections shot for shot. This is not true for the entire film. While they may appear similar on the surface a careful viewing will find notable differences.

The new film’s photo-realistic computer animation looks like something ripped from the cameras of National Geographic documentary film makers but as stunning as this is, the film is simply less colourful than the original’s cartoon animation. This new approach actually robs the story of its fairytale/folktale underpinnings, emptying the movie of a lot of its life and energy. Also, the original cartoon animation provided incredible versatility in depicting a character’s emotions and motivations.

The limitations of photo-realism fail to provide characters like the red-billed hornbill Zazu (John Oliver), Scar, and Simba with a wide range of emotions because there are only so many actual facial expressions birds and lions can make whereas in traditional animation cartoonists have a lot more freedom and flexibility to mimic human facial expressions in their drawings. This helps accentuate the voice performances building on what the actors provide in the studio. Due to its limitations the photo-realistic computer animation actually adds pressure on the voice actors to make up the difference. As a result many of the voice actors come across as wooden and flat when compared to the voice work of the original film. This is especially noticeable when comparing Zazu from the original film voiced by Rowan Atkinson vs John Oliver in the new film. So, while the technical achievements of the computer animation might be celebrated, this same achievement calls into question the necessity of the remake. Disney, to be fair, sees the necessity of the project in its profitability which projects raking in more than a billion dollars at the box-office further extending the studio’s “live action” remakes of its popular animated catalogue.

As with the original cartoon Christian viewers should be aware of what the film teaches spiritually. There are two seemingly competing spiritual viewpoints presented. First, the film is rooted in Animism a pagan spirituality represented here with the idea that the spirits of the dead inhabit the natural world. In both versions of the film this is shown in the notion that the stars in the night sky are actually the spirits of deceased righteous kings. As a cub Simba learns this from Mufasa and later when he needs to remember who he is Mufasa’s spirit speaks to him appearing in the night sky within a lightning storm. This communication between the dead Mufasa and Simba happens under the supervision of the shamanistic baboon Rafiki (John Kani). Christianity does not teach this kind of post-death existence where spirits are lodged in the natural world, and forbids contact with the spirits of the deceased (Deuteronomy 18:10-13, Isaiah 8:19). Furthermore, Scripture teaches that this is a boundary the dead cannot cross (Luke 16:27) and that the dead are unaware of the living (Job 14:1-2, 21), “he who is joined with all the living has hope, for a living dog is better than a dead lion. For the living know that they will die, but the dead know nothing, and they have no more reward, for the memory of them is forgotten” (Ecclesiastes 9:4–5). While Scripture speaks of the “great cloud of witnesses” in the Book of Hebrews (Hebrews 12:1) and the Lutheran Confessions don’t forbid prayers for the dead (Apology Article XXIV [94]) there is no command to or encouragement from the Bible to seek out the kind of conversation found in both The Lion King or The Lion King: Live Action between the dead Mufasa and his son Simba. In fact, Scripture discourages the practice.

Some viewers might see an analogy in Mufasa and Simba’s conversation with the Scriptural account of God the Father speaking to His Son out of the cloud at Jesus’ baptism or later on the Mount of Transfiguration. This is a weak analogy when considering the whole story presented in The Lion King. Mufasa is a living lion who died and God the Father is God only and did not die in an attempt to spare His Son’s life. God the Father never died. Again films such as The Lion King: Live Action encourage this sort of unbiblical animistic approach to the dead and Christian families attending them need to be aware of this concern while remembering that trying to make this “square peg” of a film fit the “round hole” of Christianity is futile. So while Simba is a saviour figure he need not be compared to Jesus and his relationship with Mufasa likewise doesn’t need to be compared to the relationship between Jesus and God the Father as this analogy quickly breaks down. That said, as in the original film, Mufasa and Simba’s father son relationship is warm and positive unlike many Hollywood films that present fathers as distant, abusive, inept or absent. This positive element of the film can be praised without making false analogies to Jesus and God the Father.

The second spiritual viewpoint presented in The Lion King: Live Action is an anti-spiritual naturalistic materialism. Near the beginning of the film when Mufasa and the young Simba survey the kingdom together, Mufasa explains the circle of life and the nature of the world they live in on the basis of simple materialistic naturalism. Spiders, elephants, and antelopes are shown as Mufasa explains the delicate balance of life on the savannah and when he tells Simba they all need to be respected the cub asks, “but don’t we eat the antelope?” to which Mufasa replies, “yes, but when we die we become the grass and the antelope eat the grass.” This viewpoint is also emphasized when Mufasa says, “Everything the light touches is our kingdom. But a king’s time as ruler rises and falls like the sun. One day Simba, the sun will set on my time here, and will rise with you as the new king.” To which Simba asks his father, “all of this will belong to me?" Mufasa answers, "It belongs to no one but it will be yours to protect. Everything the light touches ... while others look at what they can take a true king searches for what he can give."

Notice the line “It belongs to no one.” It’s not found in the 1994 version. In the original cartoon when Simba asks “and this’ll all be mine?” Mufasa answers, “Everything. Everything the light touches.” Christian viewers will find both the original and this new addition at odds with their confession of faith (Psalm 24:1, Psalm 89:11, 1 Corinthians 10:26) and might be reminded of passages from Scripture where God says, “For every beast of the forest is Mine, the cattle on a thousand hills. I know all the birds of the hills, and all that moves in the field is Mine. If I were hungry, I would not tell you, for the world and its fullness are Mine” (Psalm 50:10–12). Saying that the African savannah belongs to no one is like saying there is no God, no creator, no ultimate authority above the kings apart from the materialistic balance of nature which must be maintained for the good of all and the unbroken continuation of “the circle of life.” Further to that, the characters of meerkat Timon (Billy Eichner) and warthog Pumbaa (Seth Rogen)— loyal albeit foolish friends of Simba—present time as a straight line with a beginning, middle, and end where one can put their past behind them and move forward. While this view is ultimately deemed foolish within the film, Christians share this understanding of time; that it’s not a circle but a straight line leading to the Last Day and Eternity.

Most of Timon and Pumbaa’s “live life for today with no worries” philosophy is indeed foolish (1 Corinthians 15:32b) yet they are the two characters who poke fun at Simba for his animistic beliefs about the stars being the spirits of dead kings watching over the world. Pumbaa objects because he thinks the stars are “balls of gas burning billions of miles away,” while Timon thinks they're “fireflies that got stuck up on that big bluish-black thing [the night sky].” This is a good example of how the film contains two seemingly competing spiritual viewpoints based on a shared belief that there is no Christian God. Anything approaching Christian beliefs in the film fails to hold up under thoughtful scrutiny with the expectation of the general stewardship of nature (Genesis 1:28–30, 2:15) and keeping the second table of the law which condemns the abuse of authority, murder, theft, lying and coveting as evil worthy of fighting against and calling out. Audiences might notice Beyoncé singing “be one with the Great I Am” as Simba rushes to confront Scar near the end of the film. While this might sound Scriptural (Exodus 3:14) the song “Spirit” also includes lyrics like, “the stars gather by, by your side” and is actually just more Animism.

Films aimed at children and families need to be taken as seriously as films aimed at adults, if not more seriously. Like other films they teach viewers philosophies and ideas which either match or contradict what Scripture teaches. Families watching The Lion King: Live Action will want to have a conversation about what Christians believe, teach and confess about life, death, and the stewardship of the earth and also who the world ultimately belongs to. Theologically speaking the film amplifies the problematic content of the original by further sharpening its Animistic and materialistic ideas. Artistically speaking the original 1994 film remains the superior film and audiences watching The Lion King: Live Action will find that while it has its moments it lacks the visual flair and charm of the original.