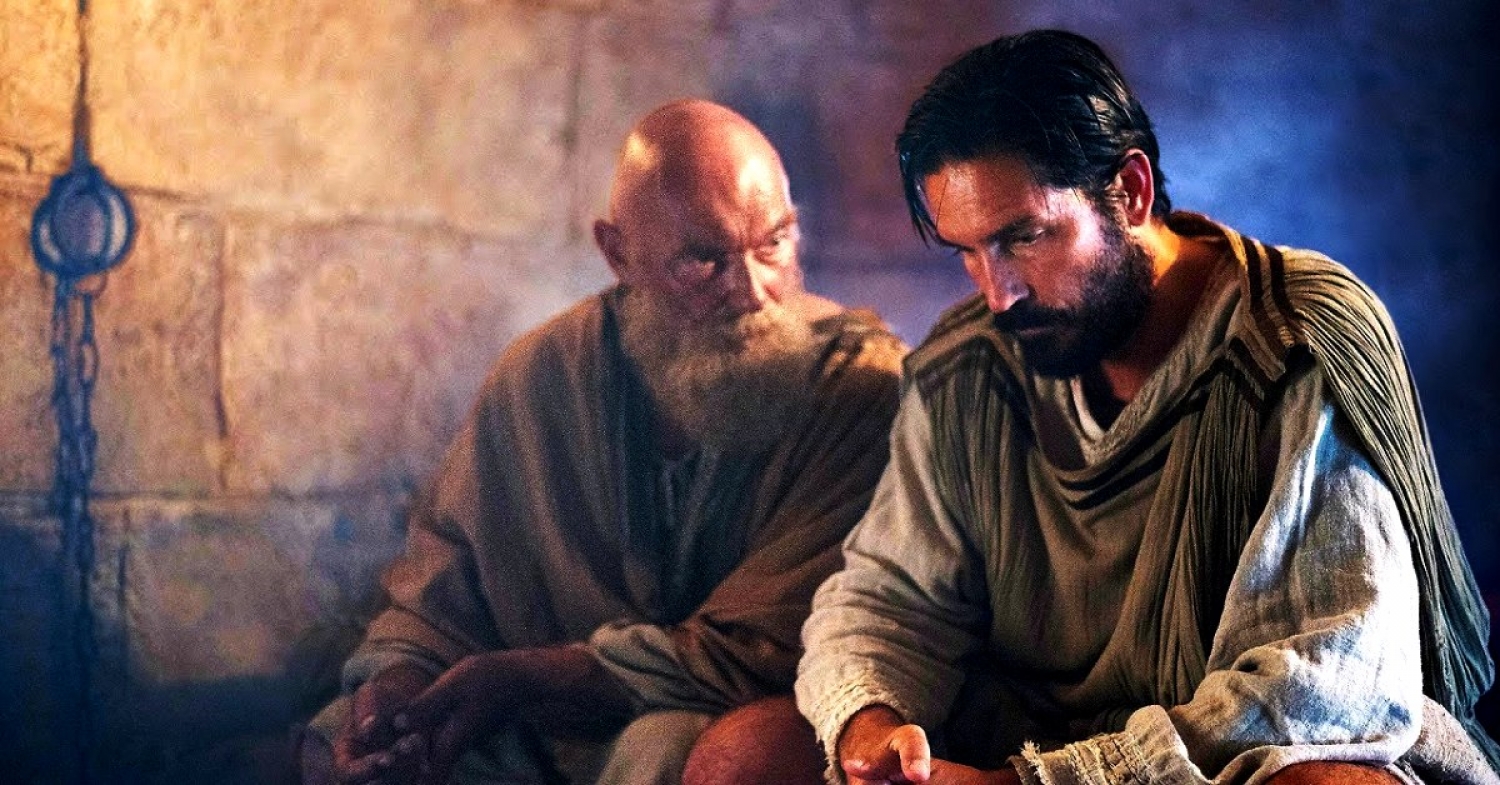 When watching Paul, Apostle of Christ (2018) viewers will be well served to remember St. Paul’s words to the early Corinthian Christians: “But God chose what is foolish in the world to shame the wise; God chose what is weak in the world to shame the strong” (1 Corinthians 1:27). Most people don’t think much of Christian films and studios yet Sony Pictures’ division Affirm Films wouldn’t be dedicated to producing them had Mel Gibson’s The Passion of the Christ (2004) not been so successful. For some the trailer for this new film will look like another sword-and-sandal film, only this time light on the sword and heavy on bearded-men-in-shabby-robes-talking with each other. While Paul, Apostle of Christ is clunky in spots and at times a little overacted, it shines bright where in needs to and in the end is a remarkable film.

The premise of Paul, Apostle of Christ is St. Paul’s letter to St. Timothy where he says, “Luke alone is with me” (2 Timothy 4:11). Paul (James Faulkner) is imprisoned in Rome’s Mamertine Prison around 67/68 A.D. near the end Emperor Nero’s reign. Fire has swept through the city; Nero blamed the Christians, so they are under persecution—imprisoned, burnt alive in the streets as human torches, and thrown to the wild beasts in the Coliseum’s circus. A group of Christians under the care of Priscilla (Joanne Whalley) and Aquila (John Lynch) live in fear and uncertainty. The film opens with the arrival of St. Luke (Jim Caviezel) who has come to see Paul and the other Christians.

Three plots interweave with Luke who is connected to each thread. First, Paul in prison, the central plot; then, the persecution of the Christian community; and finally the illness of the daughter of a fictional Roman soldier, Mauritius (Olivier Martinez), who is the Mamertine Prison’s warden. Filmmaker Andrew Hyatt has commented that in creating this character he draws from scriptural accounts where Peter, Paul, and Jesus interacted with various Roman centurions, prefects, guards, and their families. As a result, viewers familiar with those biblical accounts will feel an authenticity to the fictional story of Mauritius, his wife Irenica (Antonia Campbell-Hughes), and their sick daughter. Including fictional characters in Bible dramas has a long tradition: think The Robe (1953) and Ben-Hur (1959) (2016). More recently, Affirm Films released Risen (2016) about a Roman centurion who oversaw the crucifixion of Jesus and was tasked with investigating Jesus’ Easter resurrection for Pontius Pilate. In the character of Mauritius Hyatt has produced a welcome and worthy addition to these fictional and/or fictionalized Romans. The story of Mauritius and his wife as they struggle with their devotion to the pantheon of Roman gods and interact with Christians like Paul and Luke is very compelling.

The weakest part of the film is the plot around Priscilla and Aquila. This is where viewers see the overacting and the film’s clunky bits. Since much of this happens in the film’s first act some viewers may find it hard to stick with it. Don’t be deterred, press on. The weakness in the early scenes may cause some to roll their eyes but it won’t matter when the film hits its exceptional conclusion.

Casting James Faulkner as Paul is brilliant. As an actor he is known for playing gruff, hard, even cruel and unpleasant characters. He brings this quality to Paul, Apostle of Christ. The genius is that it resonates with who Paul had been in his earlier life: Saul of Tarsus, a man who believed himself virtuous but had lived his life fueled by hate and anger. What Faulkner provides is a performance where the personality of Saul is still there but now, christened by Ananias (Manuel Cauchi) as Paul an Apostle of Christ, that personality is tempered by the love of Christ and the grace and mercy of God. Still gruff and hard, a wretched man saved from his sin, Paul boasts not in himself but in Christ Jesus. This is a believable portrayal of Paul and an unexpected but welcome nuanced performance of a redeemed man.

Jim Caviezel cast as Luke is equally fascinating as he had played Jesus in The Passion of the Christ (2004). Often, while watching Caviezel’s St. Luke, his portrayal of Jesus from The Passion of the Christ comes to mind. While this might seem distracting, it again proves a brilliant choice. At one point, Luke says to Paul, “I never met Christ in person but the day I heard you preaching in Troas, I saw Christ in you.” As he says these words viewers familiar with The Passion of the Christ may see Caviezel’s earlier performance as Jesus reflecting into this new film. Do we make anything of that? Is it an unintended coincidence, or simply odd casting? Hard to say, but it permeates the viewing experience of Paul, Apostle of Christ.

With few exceptions the characters of Paul, Luke, and Mauritius ring true. Likewise, the collision of Christian and Roman virtue ethics, and religious convictions is well portrayed with one exception. While the film shows pagan sacrifices and prayers, there is only one instance of Holy Communion and it is not in the context of congregational Christian worship. Overall, while Christians are not shown in worship nor seen praying the Psalms, there is one powerful moment where they pray together the Lord’s Prayer.

Is this a family film? Mature Christians and interested individuals will get a lot from Paul, Apostle of Christ but be forewarned: the film is rather bleak, unfolding slowly, but building patiently to its conclusion. Not all viewers will embrace the pacing and grim nature of some scenes and it will not be appropriate for small children. Teenagers will likely have less trouble with the blood and persecution than with the slow pacing. Don’t worry about seeing gory scenes of wild animals attacking and eating Christians in the Coliseum. While these are talked about, and Christians are shown entering the coliseum, Hyatt doesn’t include graphic depictions. That said, the film does show Nero’s human torches and that may be too much for sensitive viewers.

As a filmmaker Hyatt shows great restraint in taking liberties to create a fictionalized story. Paul, Apostle of Christ is different from films like The Young Messiah (2016) or the TV miniseries A.D. The Bible Continues (2015) which strayed further in their speculations and took greater liberties with the Scriptural accounts. For instance, Hyatt doesn’t yield to the temptation of including a scheming Emperor Nero or other trappings of conventional historical dramas which might compromise the point of the film. Instead, he opts for a more thoughtful character study of Paul, Luke, and Mauritius. Although much of the film is fictional, it is also faithful and replete with Scripture. This is a film deserving of a wide audience and, while it may be panned by the world as just another weak and foolish Christian film, it is a strong presentation of forgiveness, grace, and mercy, and is exceedingly wise in its portrayal of love.