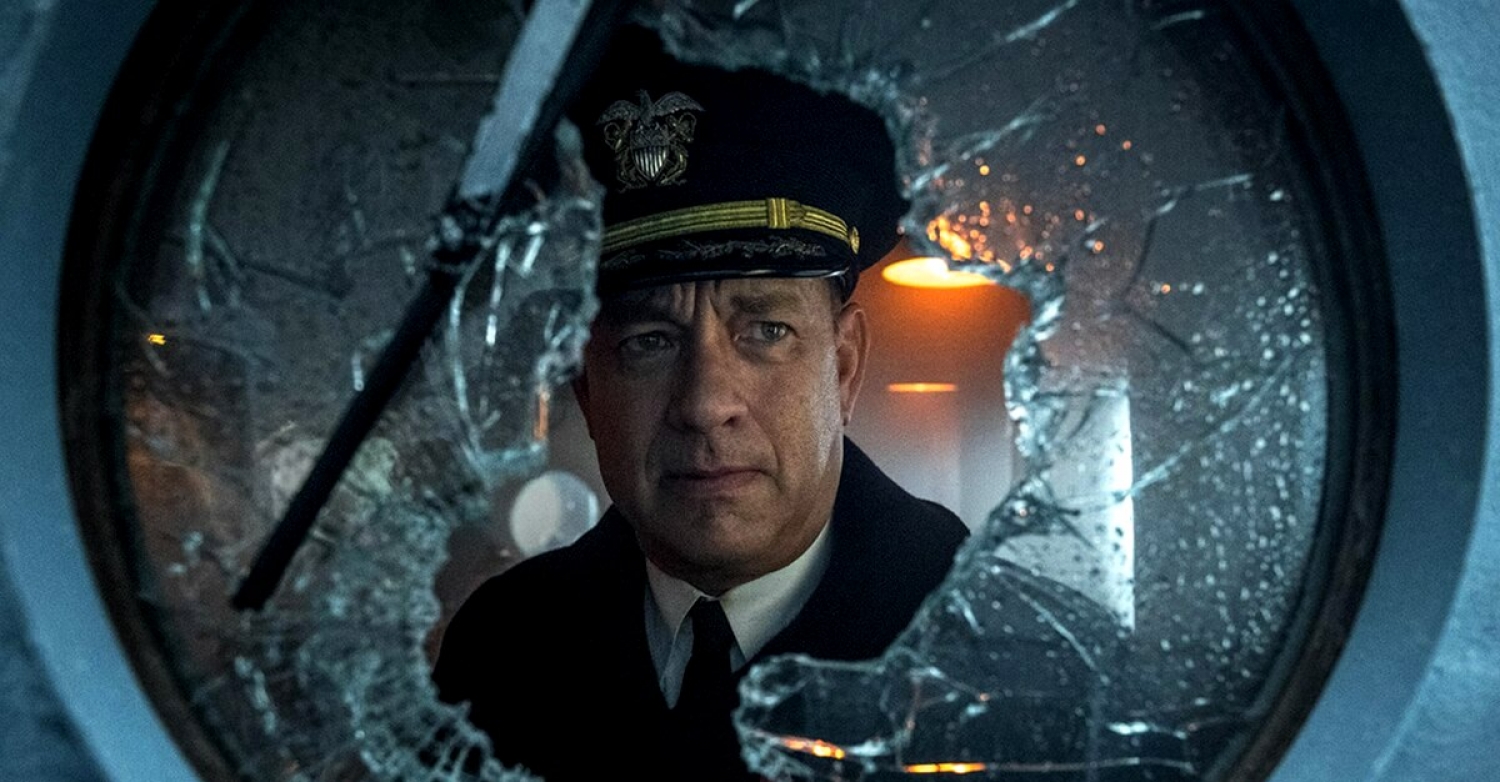 Greyhound, Tom Hanks’ adaptation of the C.S. Forester 1955 novel The Good Shepherd, was set to sail into theatres June 12,, 2020 and then Father’s Day, June 21. Due to the COVID-19 pandemic it was finally launched into the seas of digital streaming July 10 on Apple TV+ the new streaming service which acquired the film’s distribution rights from SONY Pictures after a reportedly intense bidding war.

The film closely follows Commander Ernest Krause (Tom Hanks), an experienced USA Naval officer, on his first commission as captain in 1942 around the middle of WWII. He’s tasked will shepherding a convoy of troop and cargo ships across the North Atlantic through the “Black Pit,” an area out of range for Allied air support and routinely patrolled by Nazi U-boat wolfpacks. His ship, the USS Keeling codenamed "Greyhound," is a Fletcher-class destroyer. Accompanying its crew are additional vessels including a Canadian corvette the HMCS Sackville. Focused on the co-ordinated efforts to protect the convoy the bulk of the movie takes place as they traverse the “Black Pit,” title cards reminding the viewer how many hours are left before they reach the safety of RAF air support.

War films use a kind of short hand that helps build characterization quickly: maybe one of the sailors has a nickname, or a photo of his girlfriend or fiancée or wife tucked in a pocket; maybe he has a distinctive physical feature or voice; maybe in a quiet moment he tells a story from back home about his mother’s cooking, or what he plans to do when he gets back home (in most war films that’s usually a big hint that the character will die before the film is over). In Greyhound Hanks as writer refrains from including any of these details opting to focus almost entirely on Captain Krause. He is the only character with a life outside of his work on the ship: a girlfriend Evelyn (Elisabeth Shue) whom he loves and wants to marry but refuses his proposal before he ships out. Unfortunately choosing to limit additional characterization of the crew makes it hard for viewers to hope for or grieve with crew members who die in battle because unlike the captain they have not been built up as characters. Even the one exception, crew member (Rob Morgan), never receives a back story although viewers might piece together that he was from Ohio.

With a running time of 91 minutes, ten of which are final credits, there was ample time to flesh out a couple of crew members or include a B-plot to run alongside the story of a first-time captain battling U-boats in the North Atlantic. A number of times in the film a disembodied voice of an unnamed U-boat wolfpack captain breaks in over the USS Keeling’s communications taunting Krause. Viewers are never shown the inside of the U-Boat or the face of the antagonist German trying to psychologically undermine Krause’s confidence. This is another area where character development could be expanded. (As an aside, Nazi U-Boats could not hack into US Naval communication systems. This is a bit of dramatic fiction.) And this is perhaps the film’s greatest flaw: there are occasionally elements meant to illicit drama, but they are sparse. No amount of action— and there is a lot of action— can make up for thinly-written characters. Strong characterization can ramp up even a dull action scene. It is challenging to sustain excitement or tension when viewers have little or nothing to cling to.

While not explicitly detailed in the film, in C.S. Forester’s book Captain Krause is the son of a Lutheran pastor. This explains why he is shown privately praying an abbreviated version of Luther’s morning and evening prayers as found in the Small Catechism: “Dear Lord, let Your holy angel be with me, that the evil foe may have no power over me,” and “into Your hands I commend myself my body and soul, Amen.” The bits of these prayers were featured in the film’s trailer and Lutherans hoping to find the full prayers may be disappointed. That said, Krause is portrayed as a man of prayer who keeps a small card tucked to the mirror of his cabin quoting Hebrews 13:8 “Jesus Christ is the same yesterday and today and forever.” His meal prayers are silent and out of respect the crew around him stand silently as he prays. Had the prayers not been silent Lutheran viewers might expect to hear Krause pray, “Come Lord Jesus be our guest and let these gifts to us be blest, Amen.” The situational irony left unexplored is the American Krause (a German surname), and apparent Lutheran, engaged in battle with a German wolfpack captain who may potentially be saying the same prayers albeit not in English. Again, this is another area of potential drama the film leaves out. It’s important to add that while the film is based in the hard reality of war at sea at the height of WWII it is a fictional story. There was no USS Keeling and Krause is not based on an actual US Naval captain so the filmmakers were free to build on concepts like both captains being Lutherans or at the very least Christians.

Christian viewers may notice two other details; one rather obvious, the other less so. The obvious one is the burial at sea of three sailors who died in battle. It is refreshing to see a dignified burial in a film which emphasises the resurrection of the dead quoting Revelation 20:13 and the promise that on The Last Day the sea will give up her dead and that these sailors and everyone on the ship who have faith in Christ will likewise be raised up on That Day to eternal life by the power of the resurrected Christ Jesus as described by St. Paul in Philippians 3:21. Krause, not the ship’s padre, presides over this abbreviated Service of Burial at sea praying the prayers and quoting the prescribed Scriptural passages. The second less obvious thing to contemplate is when one of the bridge crewmen notices that Krause, who eschewed sleep and food for hours on end, has bloody feet from standing without rest. This kind of self-sacrifice, marked out in Krause’s bloody footprints, points to the suffering of Christ Jesus and His passion and crucifixion. The captain tasked with shepherding the convoy to safety is willing to put others before himself, his steadfastness and servant attitude on display. Repeatedly, the film shows the crew looking to Krause to see his reactions and how he deals with what is thrown at him. He is aware he’s under the microscope. To keep up moral he speaks privately with his executive officer, XO Charlie Cole (Stephen Graham), about finding a route to bring the convoy to RAF air cover earlier than planned. If that conversation was in front of others they might think the captain was not confident in their success. Krause, the experienced officer, knows that the work of the captain is not just successfully executing a series of commands but a vocation that extends from sinking enemy vessels right down to how dealing with crew members who get into fist fights. If he wants to model devotion and faithfulness he must likewise be devout and faithful in his vocation before others. In times of crises or trouble some will look to the Christians in their life to see how they deal with their circumstances. Greyhound provides a character study in Krause of this approach to modelling the faith.

Is it worth getting the Apple TV+ subscription to watch Greyhound? For some yes; for most people not really. The platform which has been live for the past seven months is empty by comparison to streaming services like Disney+ and Netflix. That of course could change in the future.

To be eligible for awards Greyhound will need a theatrical release, even if it’s limited, so it may eventually play in a local theatre especially as theatres start reopening in some parts of North America— unless they change the requirements of eligibility! That said, the film has a lot going for it. For the most part it is very faithful to its time period even setting aside the modern identity politics that creep into most films today which would be historically out of place in 1942, it has a strong Christian central character in Krause who sees the steadfastness of Christ Jesus the same yesterday, today and forever as a characteristic he wants to emulate as a captain even in war, it respects the dead, and is not gratuitously violent nor does it glamorize warfare. What it lacks is rich characterization and storytelling that invite investment in the men risking their lives in the service of others. Greyhound is a little dull compared with films like Christopher Nolan’s Dunkirk (2017), Mel Gibson's Hacksaw Ridge (2016), or even older films like Steven Spielberg's Saving Private Ryan (1998) which also stars Tom Hanks. The best WWII submarine film is still Wolfgang Petersen's Das Boot (1981). Viewers who enjoy Greyhound should revisit, or watch for the first time, Das Boot as a companion piece to Greyhound. Together these two films go a long way in painting a picture of the harrowing struggle to survive the treacherous theatre of war that was the North Atlantic of WWII.