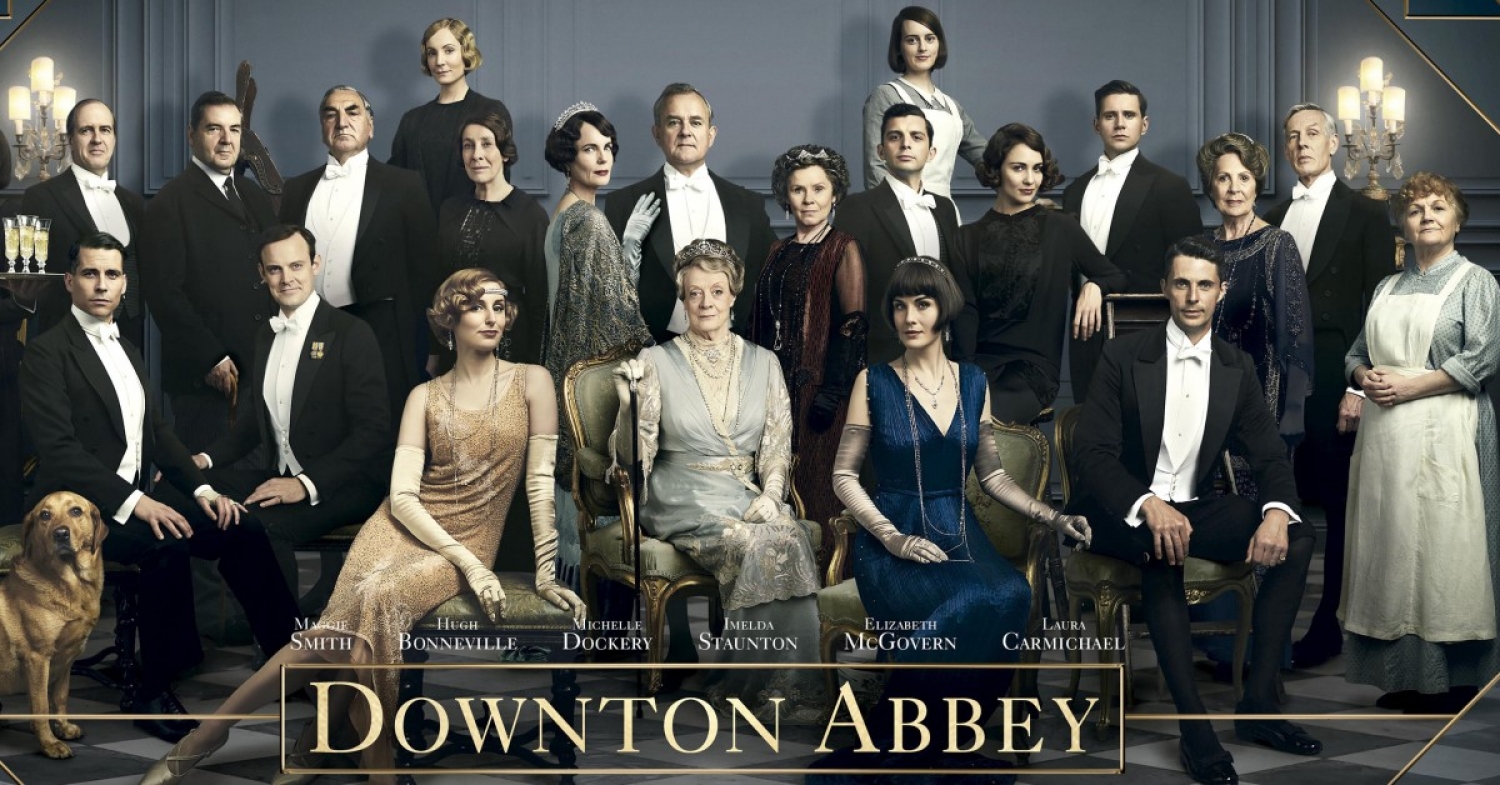 Thick with plots and out of character

A 1927 overnight visit from King George V (Simon Jones) and his wife Queen Mary of Teck (Geraldine James) to the household of Robert Crawley, Earl of Grantham (Hugh Bonneville) throws Downton Abbey into turmoil when the downstairs staffs discovers their services aren’t needed. Upstairs, the family has its own concerns. While Lady Mary Talbot née Crawley, the Earl’s eldest daughter, is focused on accommodating the royal visit, the Dowager Countess Violet Crawley (Maggie Smith) broods over a rumour that an inheritance which should pass to her son Robert may be given to someone outside the family.

The inheritance is in the hands of the Dowager Baroness Maud Bagshaw (Imelda Staunton) a lady-in-waiting to Queen Mary who wishes to bequeath it to her long-time attendant Mrs. Lucy Smith (Tuppence Middleton) a commoner. Smith ends up in a burgeoning romance with the widower Mr. Tom Branson (Allen Leech) the former Downton Abbey chauffeur and Irish republican who had married into the Crawleys and remained with the family after his wife Sybille had died giving birth to their daughter.

Many fans of the TV show created by Julian Fellowes will simply enjoy seeing the characters they have grown to love over the course of the program’s six seasons (2010–2015). However other fans may feel there is too much crammed into the film version. Again, Fellowes is the writer and provides audiences with an entire season’s worth of plots in two hours. As a result there is little room for subtlety or effective development of mystery or narrative suspense—a hallmark of the TV series. The film could be compared to one of the many Christmas specials which were more contained in narrative but tended to bridge one season with another.

Director Michael Engler does his best to incorporate Fellowes’ large cast; introducing new characters while navigating the numerous narratives and plots. With nearly all the TV show’s cast returning this is a real challenge especially when there is a desire for each character to participate. Fellowes, credited as both the developer of the characters and the writer of the film, must add multiple plots to do so. This adds to the feeling that there is a bit too much crammed into this film. For instance, there is a plot to assassinate the King that must be foiled; a mystery with a thief in the house who needs to be caught; a will-they or won’t-they marriage engagement between the assistant cook Daisy Mason (Sophie McShera) and the footman Andy Parker (Michael Fox); an it’s-hard-to-be-gay-in-1927 LGBTQ plot for Downton Abby’s Butler Mr. Barrow (Robert James-Collier); and a learning-how-to-be-happy-in-marriage through self-sacrifice and compromise plot for the King and Queen’s daughter Mary the Princess Royal (Kate Phillips) and her husband the Earl of Harewood, Viscount Henry Lascelles (Andrew Havill). Those are just some of the plots and there are more!

But one runs contrary to the characters caught up in it.

After fifty-two episodes of Downton Abbey the characters are well defined. So having them involved in things against their nature or at least unkind to their core values is hard to watch. Sensitive viewers will not enjoy seeing the downstairs staff embroiled in an underhanded farcical plot to incapacitate the King and Queen’s travelling staff in order to step-in to serve in their place. An unlikely plot involves prank phone calls, drugging the French chef Monsieur Courbet (Philippe Spall), and locking the Royal Page of the Backstairs Mr. Wilson (David Haig) in a room, not to mention a number of lies and falsehoods to cover their tracks. These antics run against the careful development of their sense of honour and duty, even in some cases their love of service and tradition and care of the Crawley family. Mr. Bates (Brendan Coyle), the valet and former British Army batman to Robert Crawley the Earl of Grantham, spent years trying to clear his name from false accusations of criminality putting any dodgy bits of his life behind him to better serve the family and make a living for himself. One of the maids, who later became his wife, Mrs. Anna Bates (Joanne Froggatt) lady’s maid to Lady Mary, was also involved in helping her husband avoid a bad reputation. After six seasons of character development these characters would seem the last to be involved in such a plot. It’s also troubling that they get away with their deception and all is well by the end of the film with no consequences to their actions. This is compounded because the audience is encouraged to look kindly on their uncharacteristic behaviour.

Perhaps most egregious is the debasement of Downton Abby’s former Butler Mr. Carson (Jim Carter). He comes out of retirement as a favour and his involvement in such a plot is implausible as he would have been well aware that the King and Queen travelled with their own staff and would have been predisposed to give their staff honour where honour is due even if the King and Queens staff proved to be difficult to respect (Romans 13:7). Fellowes seems to know this and is forced to write Mr. Carson some, “Shucks! I don’t know what came over me” lines to explain away his behaviour. His wife, head housekeeper Mrs. Carson née Hughes (Phyllis Logan), out of her deep respect for her husband and the Crawley family they serve, likewise wouldn’t likely have been involved in the farcical plot. There’s also the humiliation of former footman and town schoolmaster Mr. Molesley (Kevin Doyle) who puts his foot in his mouth in front of the King and Queen and all the upstairs aristocracy at just the wrong moment, then curtsies like a woman when he becomes flustered by his faux pas. Mr. Molesley had always been an awkward downtrodden character but the film sets his return into service as one last opportunity to shine in his former vocation in service to his King and Queen then yanks the rug out from under him in a cringe-inducing moment. In Mr. Molesley’s case, it seems designed as a contrivance to allow for an expression of graciousness from Queen Mary who brushes off his faux pas.

Fellowes could have both honoured these characters while still including some screwball antics had the King and Queen’s staff simply failed in their ability to perform their duties due to miscommunication or natural illness or some accident. This would have provided the Downton Abby staff an opportunity to rise to the occasion in a pinch and shine in their vocations when needed most.

Christian viewers may notice that, like the TV series, there is little overt Christian content. The only time God is mentioned is in the form of a joke about the weather. When Lady Mary asks her grandmother to pray for good weather for the following day’s royal parade the Dowager quips “I’ll put in a word.” The punch line comes the next morning when the family awaits the eminent arrival of the King and Queen and Lady Mary says, “The day has dawned and the weather proves conclusively that God is a monarchist.” In a more serious moment between as grandmother and granddaughter talk of the Dowager’s age and eventual death, neither speaks of the promised hope of eternal life in Christ Jesus as might be expected from Anglicans of the time. On a positive note, the film has one substantial example of forgiveness between family members involving the Dowager, and a hopeful example of marital forgiveness and reconciliation of which religious and non-religious viewers will want to take note. Sadly however, the aforementioned downstairs farce with its dishonesty, betrayal, and disregard for the reputation of others runs afoul of the commandments against theft and bearing false witness against the neighbour marring characters that for six seasons had been improving their personal reputations and growing in their vocational devotion. It is true that comedy often comes at the expense of others, however it is often hard to find the joke when the characters are close to the hearts of the viewers and doubly hard to take when the joke is out of character or even appears unkind.

Downton Abbey is a soap opera albeit a well-crafted, beautifully-photographed and well-acted soap opera. With the Downton Abbey theatrical release this fact has never been more obvious. Just as there are viewers who love super hero films, or epic fantasy films, or Westerns there will be viewers who will warmly welcome one more immersion into the fictional soap opera world of Downton Abbey with its traditions, intrigues, and romance. Had Fellowes been kinder to the vocational aspirations of all the characters he’d crafted and shown some restraint in the number of plots woven through the narrative, Downton Abbey could easily have been one of the very best in its genre.