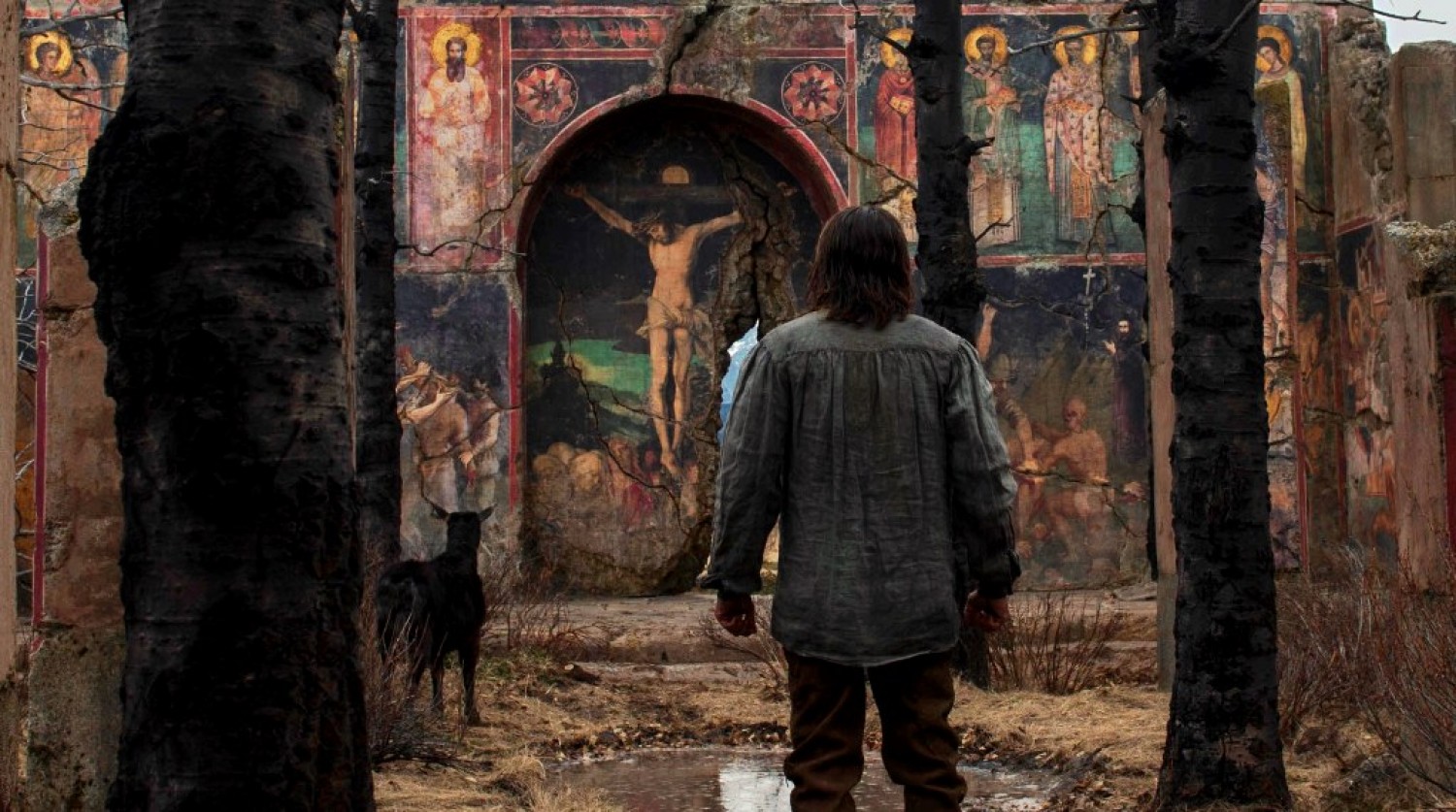 Shot primarily on location around Calgary, Alberta, Canada The Revenant is a tale of revenge set in the American frontier of the 1820s at the peak of the fur trade during western expansion. While the film’s central character, Hugh Glass (Leonardo DiCaprio), was a real person, even in his lifetime his extraordinary survival story had become folk-lore. Director Alejandro González Iñárritu's film works to further aggrandized Glass' story by adding speculative elements.

As the end credits roll viewers see the film is "based in part" on the novel The Revenant by Michael Punke. After reading the carefully-researched and lightly-fictionalized book viewers who also watch Iñárritu's film will see that it is "based in—a very small—part" on the book. Iñárritu's adaptation changes the fundamental motivation for Glass' desire for revenge.

As part of an ill-fated fur-trapping expedition Glass is mauled by a grizzly bear. Two men, Fitzgerald (Tom Hardy) and Bridger (Will Poulter), are left to provide palliative care as the rest of the expedition presses on. Abandoning him to die of exposure and his wounds, Fitzgerald and Bridger strip Glass of some of the very things he'd need to survive including Glass' rifle. Fitzgerald does this with a large degree of malice while Bridger does so reluctantly. Glass however doesn't die and, while making slow recovery, mounts an arduous trek to hunt down the men who left him for dead. Iñárritu adds a son named Hawk (Forrest Goodluck) who, in the film, Glass had fathered with a Pawnee woman. Iñárritu then has Glass in his incapacitated state witness the racially-charged murder of his son at the hands of Fitzgerald and this drives him to seek revenge. There is no historical evidence that Glass ever had a son named Hawk.

Punke's book begins with Scripture: "…avenge not yourselves, but rather give place unto wrath: for it is written, 'Vengeance is mine; I will repay, saith the Lord.'” (Romans 12:18-20). Iñárritu's film eventually gets around to this theme, but he doesn’t use the Scripture passage to inform the film from the outset. Rather, it starts with an American military massacre of a Pawnee tribe with whom Glass was living, and from which he and his son Hawk were counted among the only survivors. It isn't until part way through Glass' recovery that he comes across a lone Pawnee warrior, Hikuc (Arthur RedCloud), who shared a similar tragic experience. He says to Glass, "My heart bleeds. But revenge is in the Creator's hands." Both book and film garner a fair amount of dramatic tension by asking "What will Glass do if he catches up with Fitzgerald and Bridger? Will he take matters into his own hands or will he leave it in the hands of God? Will vendetta or forgiveness win?"

[Spoilers ahead] Glass is not the only frontier man seeking something seemingly just out of reach. There is an Arikara tribe seeking its chief's missing daughter, Powaqa (Melaw Nakehk'o). The Arikara and Glass cross paths on a number of occasions and in the end Glass' mercy towards Powaqa is rewarded when he rescues her from the hands of a French Voyageur rapist. When Glass finally has his son’s murder in his hands a bloodied Fitzgerald says to him, "You came all this way just for yer revenge, huh? You enjoy it, Glass, 'cus ain't nothing gonna bring yer boy back," to which Glass responds echoing his Pawnee rescuer Hikuc, "Revenge is in God's hands, not mine." By this point the Arikara tribe had located the missing Powaqa and happened upon Glass and Fitzgerald. The tribe, not Glass, exacts justice for Hawk’s death and Glass' abandonment following the bear attack.

When Fitzgerald and Bridger abandoned Glass in his time of need they never expected to see him again. The word “revenant” is defined as "a person who has returned, especially supposedly from the dead." Sometimes it's used when talking about a vengeful ghost or spirit. As in real life the recovery and re-emergence of Glass following the bear attack surprised everyone in the fur-trapping expedition especially the leader, Captain Andrew Henry (Domhnall Gleeson). Christian viewers then will want to note three moments in the film that symbolize Glass' "resurrection" from the dead. First, he rises up out of the shallow grave prepared for him by Fitzgerald and Bridger, then from a makeshift sweat-lodge prepared for him by the Pawnee warrior Hikuc, and finally from the inside of a dead horse Glass guts and sleeps in to save himself from a winter storm. Each time Glass emerges stronger and more alive. Of course his return from the dead is metaphorical as he never actually dies.

This imagery may provide opportunity for Christians to think of their baptism. St. Paul reminds us that in baptism a person is "baptized into [Christ Jesus'] death…" He continues, "We were buried therefore with [Jesus] by baptism into death, in order that, just as Christ was raised from the dead by the glory of the Father, we too might walk in newness of life."[1] In contrast to the symbolism provided in The Revenant a person does not emerge from the waters of Christian baptism seeking revenge on enemies. In Christ, we die with Jesus at the cross and our life is in Jesus who promises a final resurrection from the dead on the Day of Judgment.

It may be of interest to note that during the second of these "baptism-like" re-emergence scenes Glass has a vision/dream of his son Hawk in a ruined church building. The church is a mishmash of Eastern and Western Christian styles and as Glass walks towards it the steeple bell rings in the wind and the image of Christ crucified painted on the weathered apse wall is prominently visible during Glass’ and Hawk’s reunion.

Much has been made of the film project itself both because of its gruelling production schedule and its visual presentation shot with natural lighting. It has the look and feel of a Terrence Malick film and fits well alongside other critically acclaimed and challenging films like Francis Ford Coppola’s Apocalypse Now, or Werner Herzog’s Aguirre: Wrath of God. This rugged approach has captivated the imagination of viewers, and garnered the film three Golden Globe awards (Best Motion Picture - Drama, Best Performance by an Actor in a Motion Picture - Drama for DiCaprio and Best Director - Motion Picture for Iñárritu) and 12 Oscar nominations.

The Revenant is visually stunning at times. Like in his Oscar-winning film Birdman (2014) Iñárritu provides long stretches of expertly choreographed action and dialogue without the conventional cuts. This gives the film an intense realism which, while truly amazing to behold, masks a hollowness. The movie tries to be profound but in the end utilizes numerous cliché tropes to propel the plot and build tension when it could have achieved the same thing by delving more deeply into the motivations of its characters. Even though the Iñárritu film captures the beauty of the frontier landscape and its bitter dangers and troubles—from the harsh environment to its peoples—it is ultimately a poor substitute for Punke's book which has clearer Christian themes and a more compelling narrative. The film would have been much better had Iñárritu avoided adding well-worn tropes and stuck more closely to Punke's book. However, as a film The Revenant is ambitious and intense; mostly bleak with moments of beauty.