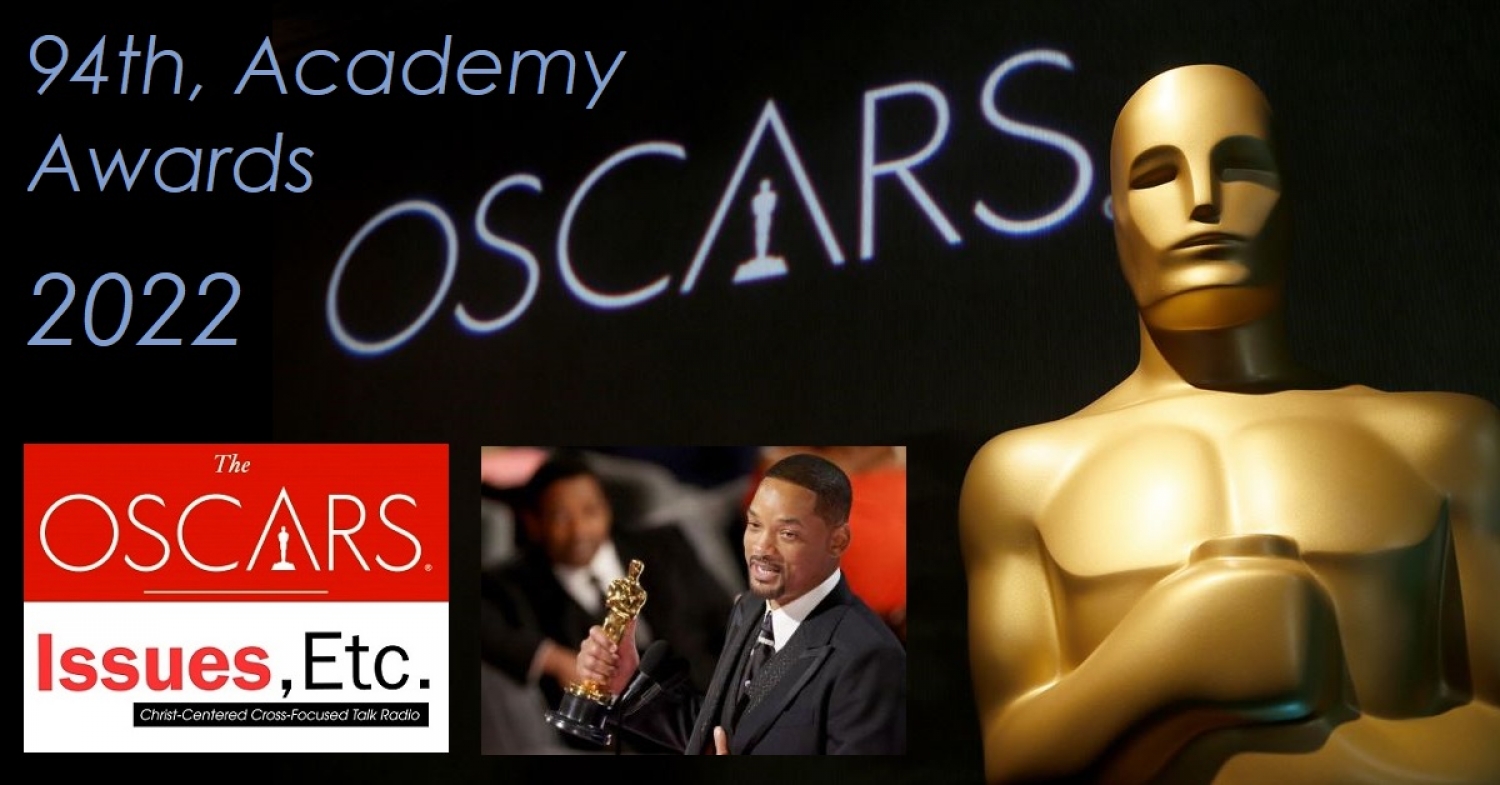 Listen here for audio of radio interviews about films from a Christian perspective with Pastors Ted Giese and Todd Wilken on IssuesEtc.org where Christianity meets culture. Click on the banner below to listen to a near 1 hour interview about the 2022 Oscars

The Oscars can be a complex and strange snapshot of a moment in time. These snapshots come through the lens of Hollywood and for all their attempts to present a glossy, polished and glamorous award show event the brokenness of life still manages to make an appearance. The 94th Academy Awards is no exception; in fact it was even more talked about than usual due to the altercation between comedian Chris Rock and actor Will Smith. In preparing for, and participating in, an IssuesEtc interview there are times when it’s hard to recall or squeeze everything into the conversation that ought to be there so in addition to the audio, which can be listened to by clicking the link above, here are some extra thoughts and one major correction.

Smith had a very emotional night, but watching this acceptance speech it is clear he is struggling and is living under a tremendous amount of pressure. There is a brokenness in his raw words that was reminiscent of Joaquin Phoenix's acceptance speech for his Best Actor win for playing the Joker in Todd Phillips' "Joker" (2019).

Part of Smith’s very emotional evening revolves around his exchange with Chris Rock a half hour earlier in the evening when Rock made a joke about Smith’s wife Jada Pinkett Smith’s hair. This is particularly odd considering that Rock had made a documentary about African American women and their challenges the deal with regarding their hair called “Good Hair” (2009).

Here’s the trailer for the documentary and Rock’s acceptance speech for winning Best Documentary at the 41st NAACP Image Awards:

It would stand to reason Rock would be more companionate about Jada Pinkett Smith’s hair considering her recent public revelation that she suffers from Alopecia areata an autoimmune disorder that causes your hair to come out. There is of course more going on in Will Smith’s reaction to Chris Rock’s joke than his wife’s hair but it is a big part of it. The other factor is likely the Smith’s very public and painful “open” marriage in which they have both fallen into adultery. So while on the one hand it is laudable that a husband would defend the honour of his wife when she is wronged publicly on the other hand neither husband or wife have been living a sexually pure and decent life toward one another.

This raises the question who slapped Chris Rock? Was it Jada Pinkett Smith using her husband as a proxy to slap Rock? Was it Will Smith’s conscience filled with shame for what he has done to his wife because of his own infidelity or perhaps it was Smith’s conscience filled with shame for what his wife has done to him because of her infidelities toward him? And was the target simply Chris Rock, who the Smiths have known for years, or was it also a lashing out at the men and women who have become entangled sexually in the Smith marriage? Perhaps fear of looking like a hypocrite knowing that he would talk about defending people in his acceptance speech if he won, which he did, and then being caught out for not having defended his wife? Could it be all of these things? What is clear is that this moment was a humiliating, painful and broken display of raw emotion.

For those unfamiliar with the film referenced in Rock’s joke here is the trailer for Ridley Scott's "G.I. Jane" (1997):

Both Will and Jada Pinkett Smith have been involved with Scientology, a non-Christian cult, and in his acceptance speech Smith referenced both God and the devil. Now the Christian when they hear them may think of these words (God and devil) in reference to what they believe about them as Christians but is this what Smith believes? It’s hard to say. People often mention God in acceptance speeches but the reason Smith mentioned the devil was because after his altercation with Rock Denzel Washington had taken him aside and had a short chat with Smith in which he warned Smith, "The devil comes for you at your highest moment." There are few higher moments for an actor than to be on the verge of winning the Best Actor award at the Oscars. So in light of Smith’s winning the Best Actor award and his mentioning both God and the devil in his speech how should the Christian approach this unusual turn of events: Perhaps the best thing to do is to contemplate a couple of the Ten Commandments, namely the First, Fifth, Sixth and Eighth.

The First Commandment "You shall have no other gods." What does this mean? We should fear, love, and trust in God above all things.

The Fifth Commandment "You shall not murder." What does this mean? We should fear and love God so that we do not hurt or harm our neighbour in his body, but help and support him in every physical need.

The Sixth Commandment "You shall not commit adultery." What does this mean? We should fear and love God so that we lead a sexually pure and decent life in what we say and do, and husband and wife love and honour each other.

The Eighth Commandment "You shall not give false testimony against your neighbour." What does this mean? We should fear and love God so that we do not tell lies about our neighbour, betray him, slander him, or hurt his reputation, but defend him, speak well of him, and explain everything in the kindest way.[1]

As for the Smith family they would certainly benefit from being part of a Christian community and having opportunity to talk with a pastor and participate in confession and absolution where they can be honest about their troubles and receive the forgiveness of Christ Jesus along with encouragement to live life different from how they are living it now. Smith did issue an apology to Chris Rock through his Instagram account but this may not be completely settled.

On April 8th the Academy of Motion Picture Arts and Sciences voted in favour of banning "Smith from all Academy events including the Oscars for 10 years." In advance of that meeting Smith tendered his resignation from the Academy effective immediately. Variety reported Academy president David Rubin's responce, “We have received and accepted Mr. Will Smith’s immediate resignation from the Academy of Motion Picture Arts and Sciences.” Variety also reports that this means: "Smith will keep his Best Actor Oscar for “King Richard,” ... and can still be nominated for future consideration but will no longer a voting member of the Academy."

Nominated for 3 awards including Best Achievement in Visual Effects, Sound and won for Music Written for Motion Pictures (Original Song) Billie Eilish and Finneas O'Connell (music and lyric by).