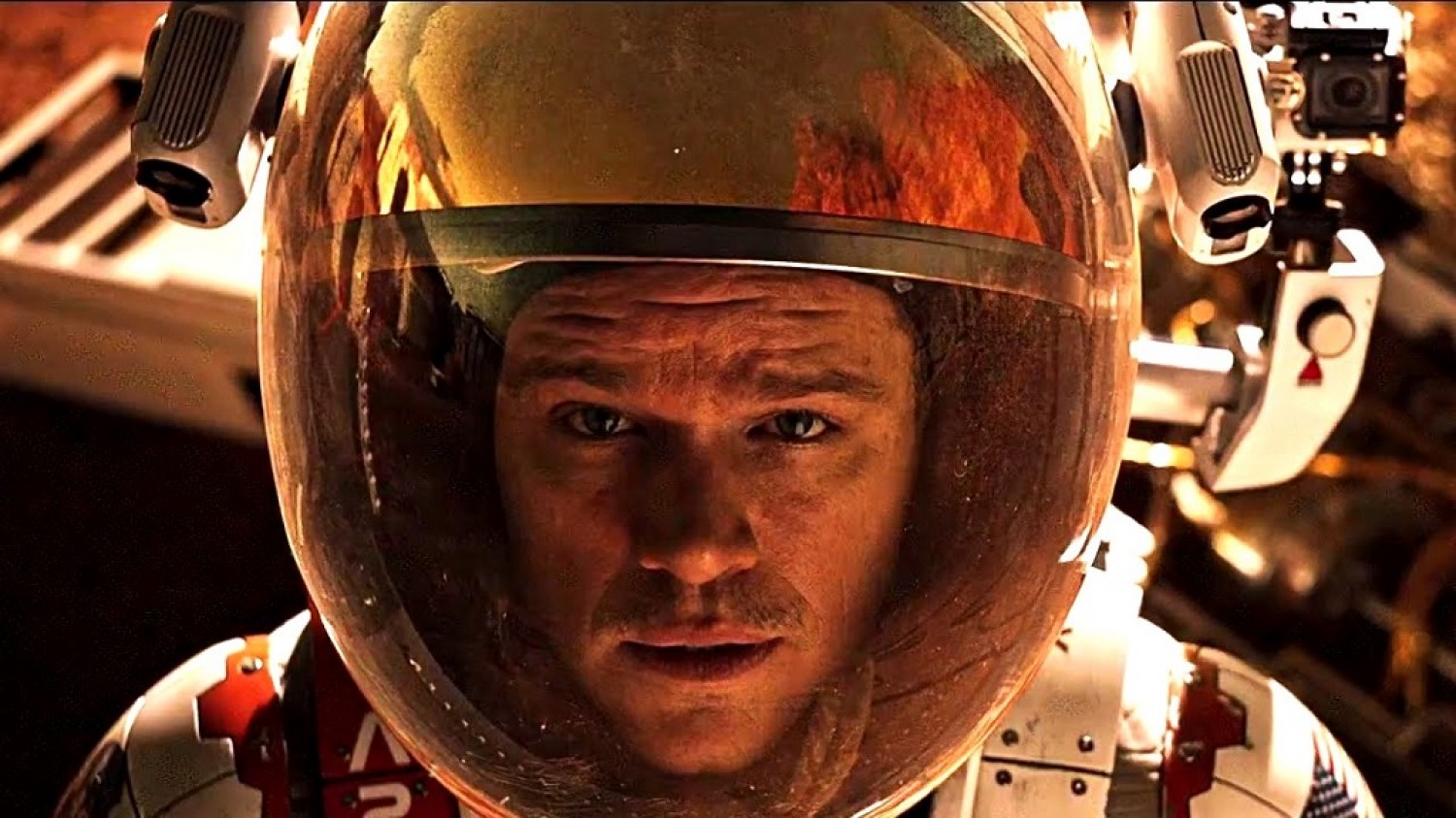 The Martian Directed by: Ridley Scott

Space exploration is dangerous as Ridley Scott's new sci-fi film The Martian illustrates. The movie tells the fictional story of an astronaut, Mark Watney (Matt Damon), left for dead on the surface of Mars during an emergency evacuation of a NASA science mission. The stranded astronaut must then figure out how to survive until the next manned mission to Mars arrives some four years in the future.

Reminiscent of recent films like Interstellar (2014) and Gravity (2013), which also included elements of survival in harsh extraterrestrial environments, The Martian is a cross between Robinson Crusoe[1] and Apollo 13 (1995). When Watney wakes up following his accident he quickly realizes he's alone on Mars and he has problems: not enough food, not enough water, no communication with NASA, and life support systems that could breakdown leaving him with no air. Ingenuity becomes vitally important as he puts to use his scientific knowledge in botany and engineering to solve his problems. When NASA discovers Watney is alive the world’s intellectual, scientific, and engineering resources are pushed to the limits to rescue this lone man trapped on Mars. The film’s dramatic tension sits on the razors edge of two questions: will Watney survive Mars, and can they bring him home?

Andy Weir's novel, upon which the film is based, is crisp and full of anxious tension, threading the needle of bleak fatalism with a narrow glimmer of hope. Drew Goddard's screenplay however is more conventional and in key moments more 'Hollywood.' Goddard was originally slated to direct The Martian and when he pitched the film to 20th Century Fox he stated his apprehensions about dumbing down the science explaining, "I don't know how to dumb this down. The science is crucial, it's like a religious movie. In this case his faith is science, not religion."[2] It’s true that Watney and the rest of the story’s characters must have faith in their mathematical calculations, however it is interesting to note that Scott and Goddard have managed to make a film that both keeps a significant amount of the book’s hard science while presenting a softer, more congenial view of religion than is found in Weir's novel. Where religion comes up in The Martian the film favours Christianity.

Back on earth one of the characters, Vincent Kapoor (Chiwetel Ejiofor)[3], is asked if he believes in God? He responds by saying he’s half-Hindu, half-Baptist. In the book the character is named Venkat Kapoor and he's fully Hindu. The film’s shift to alter the character in a way that includes a Christian identity is interesting even though in the end Kapoor thanks the 'gods' as he does in the book.

Watney's character also experiences a shift from book to film; his views on faith are transformed from flippant to poignant. Early in film, in an effort to grow potatoes, Watney needs something to burn to delicately produce water from hydrazine rocket fuel. Because NASA is very keen on not having fires in space nearly everything at his disposal is non-flammable. Martinez (Michael Peña), one of Watney's crewmates, is a devout Roman Catholic and in the personal items he's left behind is a small wooden crucifix. In the book, Watney dismissively comments, "I chipped his sacred religious item into long splinters using a pair of pliers and a screwdriver. I figured if there's a God, He won't mind, considering the situation I'm in. If ruining the only religious icon I have leaves me open to Martian vampires, I'll have to risk it."[4] In the film, Watney's tone is much more apologetic. He even comments that he's counting on the fact that God won't mind him using the crucifix to try and save his life. This comes across as a genuine hope implying Watney has some faith that Jesus, the one hanging on the cross, will be both forgiving and merciful. The film doesn't dwell on this thought but it’s there, and the fact that it's there is interesting.

Christian and non-Christian viewers alike may want to contemplate the central villain of the film: death. Many films, from the highbrow art-house Ingmar Bergman film The Seventh Seal (1956) to the schlocky horror movie series Final Destination (2000 - 2011), have death as their central enemy and as Psalm 49 says, "even the wise die; the fool and the stupid alike must perish."[5] When, where, and how a person might die can be influenced by their actions and the actions of their neighbours.

Death in The Martian is not personified as in The Seventh Seal but it is ever-present. Every decision made by Watney and NASA becomes a choice to live and not die. And with each choice the threat of death is present and real. Like a chess game they work together to avoid the checkmate of death. At one point Watney pounders how much time, talents, and treasure are being expended to keep him alive and rescue him from his plight. Viewers may also want to consider how this theme is handled, especially in a world where life is valued less and less every day. From abortion, to euthanasia, to slavery, modern life is buffeted on every side with a selfish, callous cheapening of life. Yet both in Weir's book and in Scott's film we see the key themes of life’s enormous value and the importance of protecting life in the face of death. The film has a certain optimism when held up against our society’s present darkness.

Watney reflects, "Every human being has a basic instinct: to help each other out. If a hiker gets lost in the mountains, people will coordinate a search. If a train crashes, people will line up to give blood. If an earthquake levels a city, people all over the world will send emergency supplies. This is so fundamentally human that it's found in every culture without exception. Yes, there are [unpleasant people] who just don't care, but they're massively outnumbered by the people who do." Jesus puts it more concisely when He says, "love your neighbour as yourself."[6] When death and physical harm loom, the challenge is to help and support those in danger[7] resisting the flipside temptation to abandon those in need to their own devices. The Martian embraces the first of these ideas; it's a movie that loves, values and cherishes life and respects the vocational endeavours of scientists and engineers in their work.

The recent announcement that NASA has discovered signs of liquid water on Mars has again piqued general interest in all things Martian. Scott's film undoubtedly taps into this curiosity. Filled with great moments of suspense and dramatic tension The Martian is a well-executed thriller. Like Alfonso Cuarón's film Gravity (2013) viewers need not be sci-fi fans to enjoy the ride that Scott offers.

[1] Currently there are some TV shows that deal with solitary wilderness survival like Man Vs Wild, Born Survivor and SURVIVORMAN. The fictional characters of Watney and Crusoe have something in common that is different from these shows unlike Bear Grylls and Les Stroud they didn't choose their predicament.
[2] http://blogs.indiewire.com/
[3] Chiwetel Ejiofor received a best-actor Oscar nomination for his role in 12 Years a Slave (2013).
[4] Andy Weir, The Martian, Crown Publishers 2014, pg 33.
[5] Psalm 49:10
[6] Mark 12:31
[7] Luther's Small Catechism, Concordia Publishing House (2005), Pg 12. "The Fifth Commandment You shall not murder. What does this mean? We should fear and love God so that we do not hurt or harm our neighbour in his body, but help and support him in every physical need."