More / Book of the Month / Prometheus (2012) Directed by Ridley Scott 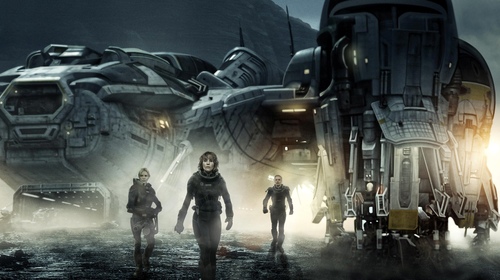 For blog posts and radio interviews about films from a Christian perspective with Pastors Ted Giese check out Mount Olive's Movie Review Index!

When pressed by interviewer Ben Stein in his 2008 documentary Expelled: No Intelligence Allowed, world renowned atheist Richard Dawkins was posed with the following question: “What do you think is the possibility that Intelligent Design might turn out to be the answer to some issues in genetics or in Darwinian evolution?” He replied, “Well, it could come about in the following way. It could be that at some earlier time, somewhere in the universe, a civilization evolved, probably by some kind of Darwinian means, probably to a very high level of technology, and designed a form of life that they seeded onto perhaps this planet. Um, now that is a possibility, and an intriguing possibility. … [However a] higher intelligence would itself have had to have come about by some explicable, or ultimately explicable process. It couldn’t have just jumped into existence spontaneously.”

This is one of the key and central theses of the film Prometheus. The other is more complex and is theological in nature: “If ‘they’ made us, who made them?” Eventually there must be a maker: One who created the heavens and the earth. In article one of the Augsburg Confession, we teach, referencing Nehemiah 9:6, that God “is the maker and preserver of all things, visible and invisible.” It is what we confess in the three universal creeds. It is what we teach our children. It is what we believe as Christians.

It also appears to be the firmly held faith of Dr. Elizabeth Shaw, the protagonist of Prometheus. Shaw, played by Noomi Rapace who recently appeared in the 2009 film The Girl with the Dragon Tattoo, wears a cross on a necklace that belonged to her father, and she keeps his faith. In spite of seemingly contrary evidence, she continues firmly in her faith.

The search for mankind’s creators

Writer Damon Lindelof, of the popular television series Lost, provided the film with a general premise heavily influenced by Erich von Däniken’s 1968 book Chariots of the Gods? In the film, a team of scientists and hired men travel to a distant planet in 2093, where they hope to find a hypothesized race of alien engineers who, in the distant past, “created” mankind on Earth.

Each of the characters has their own reasons for going on the expedition and these reasons are diverse. Shaw discovers her reasons are tied up in questions of faith. The DNA of the supposed alien engineers turns out to be a perfect match for human DNA, and all the preconceptions that brought the scientific expedition to the far flung  moon LV-223 turn out to be false. At one point when it seems the alien engineers found on the moon were indeed the creators of mankind, Shaw is told to take off her cross because her faith had been “proven” false. She refuses, and even after her cross is taken from her for fear it is contaminated, she is adamant in getting it back. She succeeds and continues to wear the cross as a sign of her faith and conviction as the film progresses.

Prometheus is a well crafted film and shows all the technical prowess and experience one would expect from film maker Sir Ridley Scott. While technically not a direct prequel to the successful Alien franchise began by Scott and H.R. Giger, Prometheus is part of the same fictional universe and provides copious answers and clues as to the  nature of the Alien series. The set pieces and landscapes are breathtaking, and the 3-D serves as an enhancement, not a distraction, to the overall feel and look of the film. The film may not be as spine-tingling as was Alien, but it does provide some memorable and unnerving thrills. Alien was a horror film and Aliens an action film. This film is more cerebral, a more complex science fiction film, yet one grounded in a real world of emotions and theology, where people have souls and robots don’t, where Jesus is mentioned first in blasphemy and finally in reverence.

Why did Scott name the film Prometheus? It’s the name of the expedition’s ship, and it’s no accident it has that name. In Greek mythology, Prometheus is the Titan who created men from clay and gave them the gift of fire after stealing it from Zeus. Zeus was displeased, and Prometheus was sentenced to eternal physical torment for his crime. This nod to classical mythology adds an additional layer of complexity to the film, alluding to the tragic nature of events. It also adds another layer of belief to a film which is rich with religious subtexts.

Scott has made a film where one protagonist loses his faith while another finds it; where characters with ill intents and motives, such as greed, find punishment through their own actions and by the hand of God; and where noble characters are willing to sacrifice their lives to save others, even people they don’t know. Prometheus isn’t a film meant to give answers. But what it is, is a film that asks a question: “Who made us?”

Prometheus is a film where one protagonist loses his faith while another finds it.

The character of Dr. Elizabeth Shaw is not your usual movie scientist, modeled after atheists like Richard Dawkins. Instead, she is a scientist who believes in Jesus, a woman with unique strength of conviction and confession, a woman striving to protect mankind and find scientific answers while maintaining her faith. Christianity, while not respected by all the characters in Prometheus, is given considerable screen time and reverence. In a world where many films denigrate faith in Christ Jesus, such respect should be applauded.

Lovers of science fiction will enjoy this film whether they are familiar with the Alien franchise or not. But it’s not a film for young children or early teens. The imagery and tone of the film at times can be very intense and the violence graphic. In a summer that will be marked with some big, noisy, and brash blockbusters, Prometheus provides stunning visuals with something extra, a story interested in the question of our origins—a question Christians have an answer for. Prometheus may well provide you with an opportunity to talk with friends and family about what Scripture teaches concerning the creation of mankind and all things.