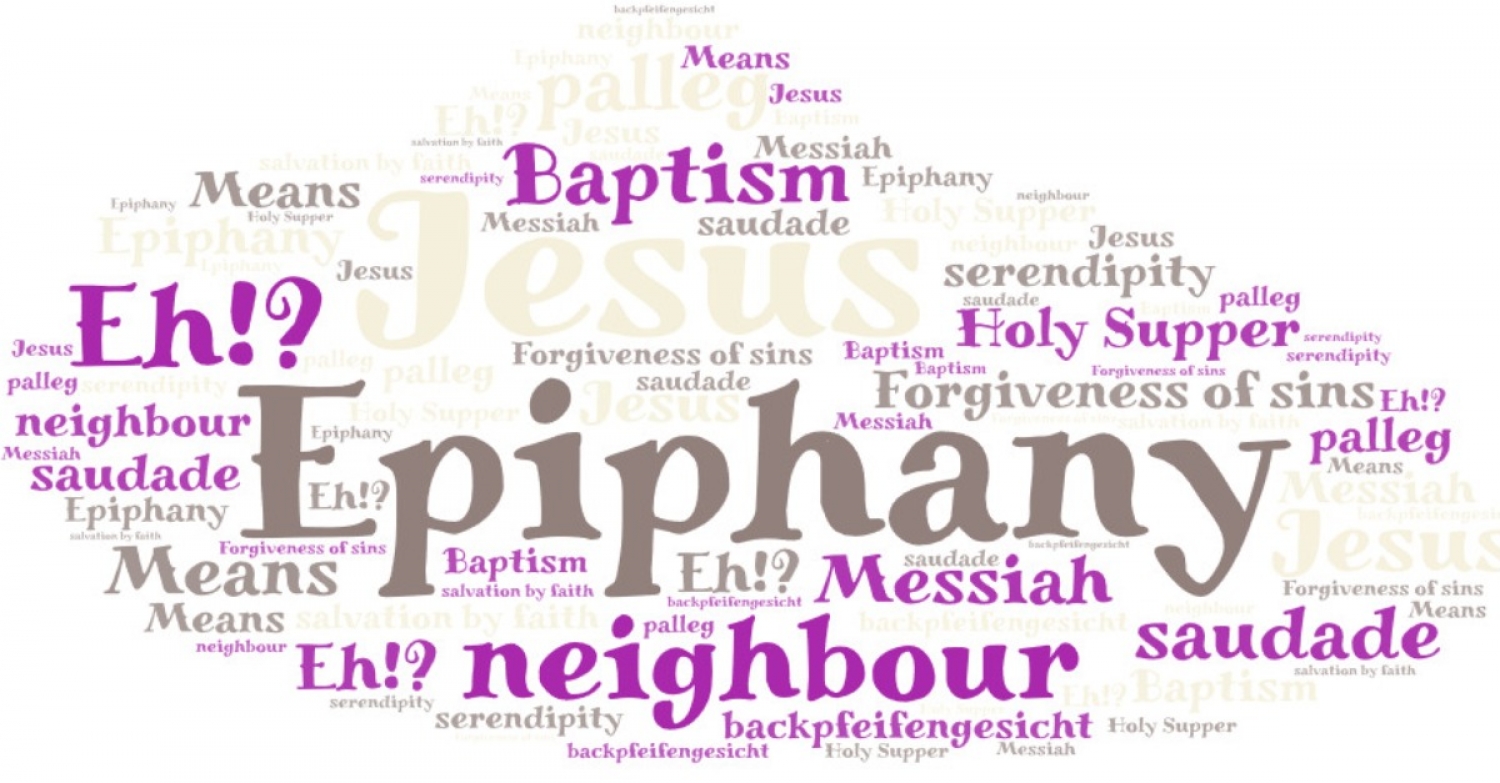 Sermon – January 6th, 2020 - Epiphany Day
Prince of Peace Lutheran Church, Regina, SK – Wascana Circuit Service
Matthew 2:1-12
Theme: “Unique Words for the World”
___________________________
Intr – Epiphany is called “The Christmas of the Gentiles” and may lead us to think about the different cultures there are around the World. There are surely things in common among them, but there are some that are singular, unique. For example, language. One word that exists in a given language may not have an equivalent in ours. In order to understand it, you need it to be explained, otherwise there will be difficulty to understand the intended message.

Here are some words from different languages with no equivalent in English.[1]

_Kummerspeck (German): Excess weight gained from emotional overeating. Literally, “grief bacon.”
_Shemomedjamo (Georgian): You know when you’re really full, but your meal is just so delicious, you can’t stop eating it? The Georgians feel your pain. This word means, “I accidentally ate the whole thing."
_Backpfeifengesicht (German): A face badly in need of a fist.
_Iktsuarpok (Inuit): You know that feeling of anticipation when you’re waiting for someone to show up at your house and you keep going outside to see if they’re there yet? This is the word for it.
_Lagom (Swedish): Maybe Goldilocks was Swedish? This slippery little word is hard to define, but means something like, “Not too much, and not too little, but juuuuust right.”
_Pålegg (Norwegian): Sandwich Artists unite! The Norwegians have a non-specific descriptor for anything – ham, cheese, jam, Nutella, mustard, herring, pickles, Doritos, you name it – you might consider putting into a sandwich.
_Saudade (Brazilian Portuguese): The word used to express the feeling of missing someone, some place or something.
_Cavoli Riscaldati (Italian): The result of attempting to revive an unworkable relationship. Translates to "reheated cabbage."

Those are singular words and expressions of which we need not only translation but also some explanation in order to understand their meaning.

Epiphany reminds us that the good news of the birth of the Saviour did not remain walled inside Jerusalem, or restrained inside Judea. It went on to gain the region, the continent, the world. It was proclaimed not only in Hebrew and Greek, but in as many languages as possible. St. Matthew’s account of the visit of the Magi to baby Jesus is the standard story to remind us of this fact, that the King of the Jews is the King of the entire World.

Dwelling for a bit on the narrative of the magi, as we read the story they may sound like people just coming out of the blue. How come all of a sudden guys from a distant land, Babylon, not only know about the Messiah but also come to worship Jesus? Well, it is actually not out of the blue, but out of the Book.

The fact that they came reveals that the great Messianic hope of the Jews – in which the Gentiles had place and part – had been communicated to them by the Jews and fascinated them. This is in accord with what we learn from the book of Daniel, who 600 years prior to this episode, in Babylon, was made “Chief of the governors over all the wise men of Babylon” (Dan 2:48), “Master of the magicians, astrologers, Chaldeans and Soothsayers” (Daniel 5:11). The later Jewish contacts down to Jesus birth may be added to this account from the Scriptures.[2] As a matter of fact, the messianic Hope was popularized in the Roman world by steady proclamation by the Jews.[3] Then the Magi, the Wise man, studied it and now they could come to meet the King and worship Him.

In order for the Gospel to go out from Jerusalem to the World, it needed the Greek language for sure, which was sort of the English of its time. But it needed also translations into other languages. So, beginning on Pentecost day, when the disciples received the special gift of speaking in tongues, the message of the Cross begun to be understood and received in many different languages and dialects not only in the neighbourhood of Jerusalem, but further and beyond.

Now, as much as the bearers of this message wanted it to be understood in those many different languages there are still words and expressions that are singular, unique to the Gospel. There are concepts and teachings that have no equivalent in any language. They are unique Words to the World. Some examples:

_Grace – It means that God gives us what we don’t deserve. Where can we find in our World Grace as we find in Christ? Nowhere. It is an unique word from the Word.
_Messiah – A God Man who being innocent is willing to die for the sins of the entire world. Unparalleled in any concept of the World.
_Forgiveness of sins; - The World is familiar with quid pro quo, pay the dues, get even. Forgiveness as complete and unlimited as found in the pages of Scripture is a one of a kind concept.
_Life everlasting – Salvation is by faith exclusively. Nothing that you do counts. This is so outlandish to the semantic fields we know that even some Christian denominations can’t help but adding even a little bit of human cooperation to it.
_Love for the neighbour including your enemy– Extremely complicated to translate into the World’s language, since you will be always understood as a loser or naïve moron who is abused by all.
_Baptism – Washing someone sends them to heaven. Who would understand that?
_Holy Supper – God the Son is present in bread and wine giving forgiveness and life. Where can I find that in any dictionary in the world?

Those unique expressions, and many more from the pages of the Bible, were translated along the centuries in many languages. They are still being translated, as for example the Missionaries in Cameroon, Africa. Still, there is something unique to them, that only faith can get ahold of.

The magi before Christ may have learned some words in Aramaic or Greek as a way to connect, or even more than that to entertain a conversation with the family. However ultimately there were things they couldn’t understand, they could only receive by faith. What is outstanding though is that they communicate in a universal language that needs no words: gifts. Gold, frankincense and myrrh. Some more recent interpretations for them point to believe, prayer and suffering, which may be used. But the most ancient understanding about them had the focus on Christ: Gold for the King, frankincense for He was God, myrrh for His Sacrifice, His death.[4]

Epiphany reminds us that the Word is not confined to our world. The singular, unique message of the Gospel is to be shared and proclaimed to the World. The message that proclaims: sin in our life accumulates too much Kummerspeck - not excess weight gained from emotional overeating, but excess of spiritual weight from the excess of guilt and unconfessed sin. Sometimes, what we do is even Shemomedjamo, “when you’re really full, but your meal is just so delicious, you can’t stop eating it”. We dwell in our sins finding justification for it. We don’t want to repent.  This is when our Old Adam needs Backpfeifengesicht, his face is badly in need of a fist.  He needs to be hit, drown, in repentance and faith. When there is repentance and faith, when we live this life, we are not in a constant Iktsuarpok, “the feeling of anticipation when you’re waiting for someone to show up at your house and you keep going outside to see if they’re there yet” because by faith, Jesus already dwells in our hearts, quenching our thirsty souls with His water of life. Then no matter the Palleg that life brings, the Norwegian “nonspecific descriptor for anything”, we will always have the assuredness of the One who is in us, for is and with is. He always provides us Lagom “Not too much, and not too little, but juuuuust right.” And we won’t have Saudade of him, we won’t miss Him even for a second, for He is with us every single day until the end of times.

Jesus was a one of a kind person, God and Man, Redeemer and Saviour. In the same fashion God’s Word has one of a kind words and teachings. The world and human reason cannot understand them unless received by faith when they are preached, taught, and enlightened by the Holy Spirit. Jesus sent His Church out to do exactly that: to make disciples, baptizing and teaching. Epiphany reminds us that we have this special task received from the Lord to go into the World, to go to the nations with the unique words from the Gospel, unparalleled in the World’s language.

Not only “out there” though, but close to home as well. For even people who speak our own language need those words to be translated to them, so that they come to know and understand God’s Grace, love, forgiveness, presence, care, Heaven. God calls us by faith to be little Christs to our city. He wants His Church to be His translators. As we know, translators they don’t own the message, they receive the content from the owner. But they are to translate if faithfully so that people understand it. We can translate God’s unique message to our generation by living it, so that we create opportunities to speak about Christmas to the gentiles. There are many of them that by the proclamation of the Word will become wise men and women who will also come to kneel before the king.

Cc – God’s unique Words. They save us. They give us life. We are called to translate them to our generation, to share them with the World. Now, using some unique English words to cap off our sermon: in the proclamation of God’s Message there is no trade-off. We receive everything by Grace, from an act that seems gobbledigook to many – the God Man on a Cross – making them even facepalm when they hear it; and we know it is a mind-boggling one. The only way to receive and accept it is by faith; then by faith we live. We receive this message not by serendipity though; it comes to us in His Word and Sacraments, unique Means with unique words to the World. A message always worth to be shared wherever we may be, eh?