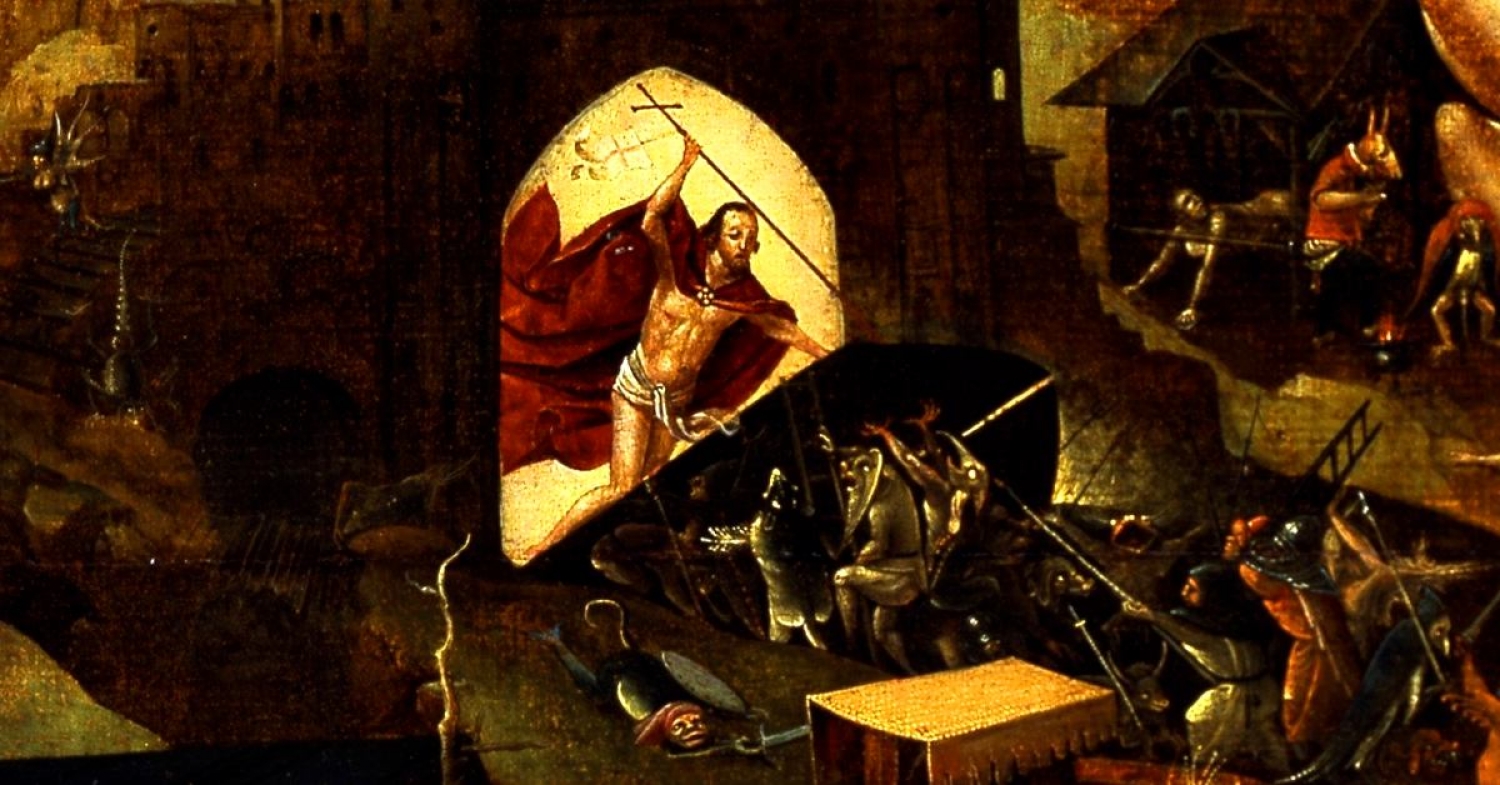 “Now who is there to harm you if you are zealous for what is good? But even if you should suffer for righteousness' sake, you will be blessed. Have no fear of them, nor be troubled, but in your hearts honor Christ the Lord as holy, always being prepared to make a defense to anyone who asks you for a reason for the hope that is in you; yet do it with gentleness and respect, having a good conscience, so that, when you are slandered, those who revile your good behavior in Christ may be put to shame. For it is better to suffer for doing good, if that should be God's will, than for doing evil.

For Christ also suffered once for sins, the righteous for the unrighteous, that He might bring us to God, being put to death in the flesh but made alive in the spirit, in which He went and proclaimed to the spirits in prison, because they formerly did not obey, when God's patience waited in the days of Noah, while the ark was being prepared, in which a few, that is, eight persons, were brought safely through water. Baptism, which corresponds to this, now saves you, not as a removal of dirt from the body but as an appeal to God for a good conscience, through the resurrection of Jesus Christ, who has gone into heaven and is at the right hand of God, with angels, authorities, and powers having been subjected to Him.”

Grace peace and mercy to you from God our Father and from our Lord and Saviour Jesus Christ. Good Christian Friends. Here we are in the Season of Easter and in these day we think on the time between that first Easter Morning and the Ascension of our Lord Jesus to the right hand of God the Father, which we will be celebrating this week on Thursday the 19th of May, 40 days after Easter Sunday.

At first glance our Epistle Reading doesn’t seem to have much Easter related material in it but there are two things the references to Baptism and also this rather peculiar side comment from St. Peter where he says, “For Christ also suffered once for sins, the righteous for the unrighteous, that He might bring us to God, being put to death in the flesh but made alive in the spirit, in which [here’s the peculiar side comment] He went and proclaimed to the spirits in prison, because they formerly did not obey, when God's patience waited in the days of Noah, while the ark was being prepared,” This points back to a moment we confess in the Apostles’ Creed where we confess that Jesus after His death and burial descended into Hell: which is to say that Jesus between His Good Friday Death and burial and His exit from the tomb Easter Morning, “descended into Hell, destroyed Hell for all believers, and delivered them from the power of death and of the devil, from eternal condemnation and the jaws of Hell.”[1] How did this happen? “We simply believe that the entire person (God and Man) descended into Hell after the burial, conquered the devil, destroyed Hell’s power, and took from the devil all his might.”[2] So how would St. Peter know about this? He does include it in his letter, the one we’ve been hearing from in our Epistle lessons recently, so he must have heard it somewhere? The answer is that Jesus would have had to have told Peter after it happened.

Once the shock of Jesus being risen from the dead had been absorbed by the disciples and they had spent more and more time with Jesus, and not just the remaining eleven, but as St. Paul puts it in 1 Corinthians 15 “more than five hundred brothers [who Jesus appeared to] at one time,” questions must have been asked like, “What happened between Your death and resurrection?”[3] or “Where did You go between Your death and resurrection?” We don’t have the specific question in this case but we do have the answer. Peter wrote this letter around 30 years after that time between the first Easter Sunday and Jesus’ Ascension into Heaven and he links this event in the Resurrection of our Lord Jesus into Baptism.

In the Small Catechism we likewise teach that Baptism works forgiveness of sins, rescue from death and the devil, and gives eternal salvation to all who believe the words and promises of God.[4] St. Peter then teaches that Jesus accomplished this when Jesus “suffered once for sins, the righteous for the unrighteous,” upon the cross and then proclaimed it in Hell to all the inhabitants of Hell. There was to be no confusion or speculation about what the innocent sufferings and death of the Son of God accomplished Jesus now has “the keys of Death and Hades.”[5]

Just think of that time between Easter and Jesus’ Ascension into heaven. Peter had betrayed Jesus denying his Lord Jesus three times[6] and Jesus had personally taken the time to forgive Peter reinstating him into his office as disciple and apostle as a pastor and under-shepherd of Jesus’ sheep in the fledgling Church.[7] Judas who did not wait for the forgiveness of the Lord was dead because Judas had hung himself[8] and Peter who was guilty of abandoning Jesus and denying Him must have been worried about death and hell and yet here we have further evidence from Peter’s letter in 1 Peter that Jesus had comforted those closest to Him with His account of His decent into Hell to destroy for the believer the power of Hell and Hell itself for them. What Good News. And furthermore Peter teaches here in 1 Peter 3 that this destruction of Hell for the Christian is linked directly to your Baptism. For what is the proclamation of Christ Jesus, that He personally “conquered the devil, destroyed Hell’s power, and took from the devil all his might [for you],” other than a proclamation that Baptism does indeed now save you, “not as a removal of dirt from the body but as an appeal to God for a good conscience, through the resurrection of Jesus Christ.” Yes, Baptism is more than a washing away of some dirt that has spoiled and soiled and dirtied your skin it is a truly supernatural washing delivering to you exactly what Jesus won for you at the cross in His crucifixion.

For over thirty years Peter wouldn’t shut up about this Good News. And as He says, “it is better to suffer for doing good, if that should be God's will, than for doing evil.” So it was in the early days after Jesus’ Ascension when Peter and the apostles where arrested in Jerusalem for teaching about Jesus, His innocent death for the forgiveness of sins and His resurrection from the dead, that the Jewish authorities, “beat them and charged them not to speak in the name of Jesus, and let them go. [So as they went on their way Peter and the rest of the apostles] left the presence of the [Jewish] council, rejoicing that they were counted worthy to suffer dishonor for the name [of Christ Jesus].”[9] When they were strictly charged to not teach of Jesus and what He had done, this same Peter and the apostles answered, “We must obey God rather than men. The God of our fathers raised Jesus, whom you killed by hanging Him on a tree. God exalted Him at His right hand as Leader and Saviour, to give repentance to Israel and forgiveness of sins. And we are witnesses to these things, and so is the Holy Spirit, whom God has given to those who obey Him.”[10]

In our present time we have no one saying we can’t preach or teach about Jesus, that we have to quit confessing that Jesus “suffered under Pontius Pilate, was crucified, died and was buried. [That] He descended into hell. [And on] the third day He rose again from the dead. [That] He ascended into heaven and sits at the right hand of God, the Father Almighty. From thence He will come to judge the living and the dead.” We are free to do so without being beaten, without being persecuted and martyred as Peter experienced. We are however curtailed from meeting in person in these days of pandemic, at least not in large numbers as we have been accustom too. As St. Peter says “But even if you should suffer for righteousness' sake, you will be blessed.” So today we suffer a little and we look forward to being together again. We likewise need to remember that while we are physically distanced from each other we are connected together in our Baptism into Christ Jesus, each of us like a thread sown into Jesus nailed on the cross, woven into the rich fabric of His decent into Hell in triumph to proclaim and deliver notice of His victory, and spread out like a white garment of righteousness made clean in the blood of our Lord Jesus, the Lamb of God, unto all Eternity.

Your Baptism provides you safe passage in the Body of Christ, that Great Boat of the Church which weathers the storms of this world sailing through every dark and brooding tempest, across a sea of covid-19, or whatever else might come our way. Together in that Great Boat, just as Noah and His family were safely in the Ark, we too are safe and secure, Baptised into Christ Jesus. Whatever Hell is raging around us, whatever wind is set against us, whatever devil threatens to capsize us, in our Baptism we have Jesus and Jesus has us. As St. Paul says, “Do you not know that all of us who have been baptized into Christ Jesus were baptized into His death? We were buried therefore with [Jesus] by baptism into death, in order that, just as Christ was raised from the dead by the glory of the Father, we too might walk in newness of life. For if we have been united with [Jesus] in a death like His, we shall certainly be united with [Jesus] in a resurrection like His.” Dear ones this affords us confidence in the face of turmoil and unprecedented distress; knowing this, listen to St. Peter when he later, in 1 Peter chapter 5, says to cast all your anxieties on this same Jesus, because He cares for you.[11] Yes He cares for you so much that He suffered death and the grave and destroyed the power of Hell and the devil removing them from your path that you will be able to follow Him without fear. Jesus was willing to go to Hell and back for you and what’s more He did go to Hell and back and His victory is now yours today, tomorrow and always: The blessed gift of Easter for you in Christ Jesus. Amen.