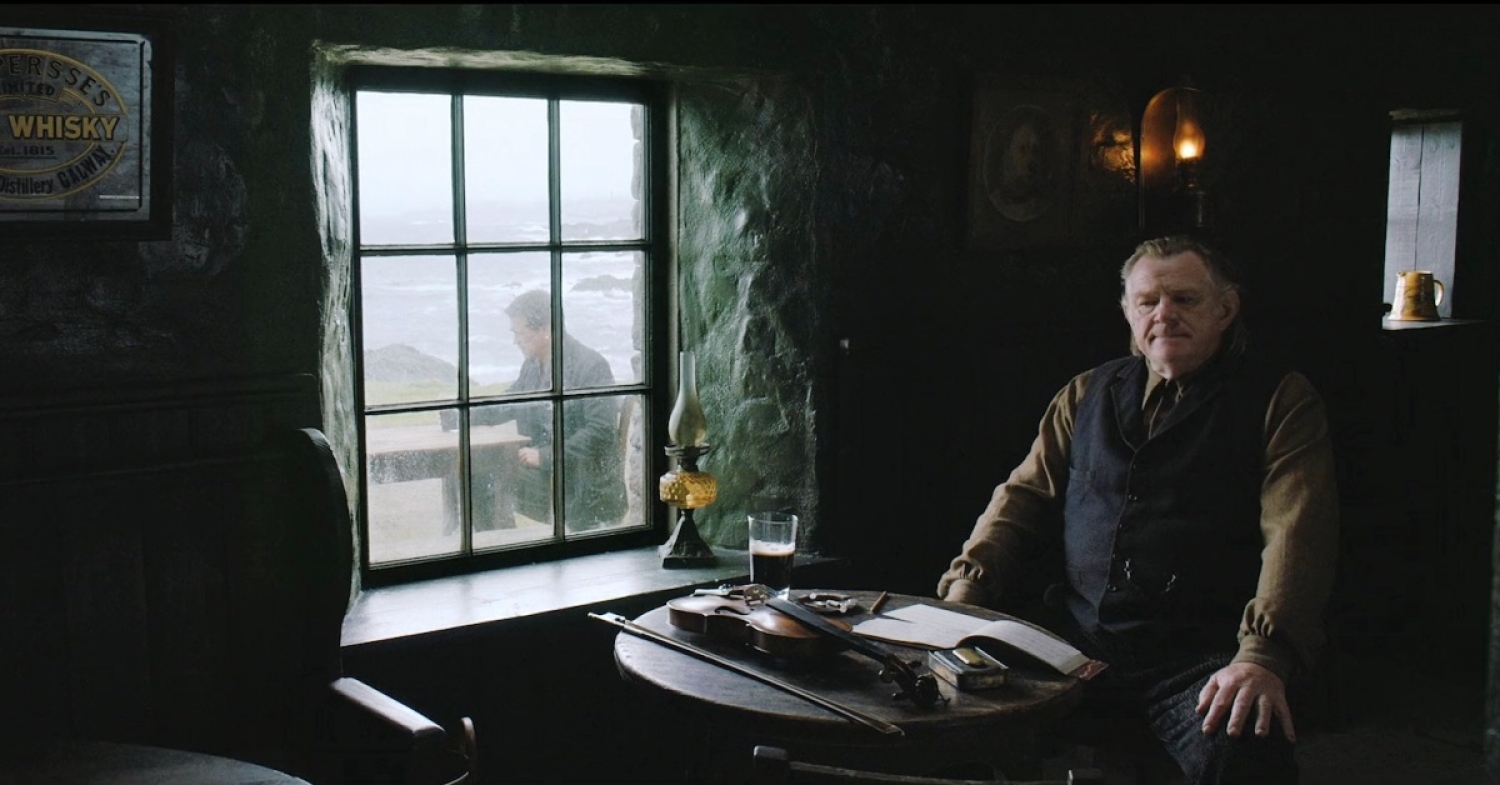 Near the end of the Irish civil war in the 1920s just off the west coast of Ireland on the island Inisherin two long-time friends suddenly become estranged when without warning the folk musician Colm Doherty (Brendan Gleeson) stops talking to the affable but somewhat oblivious Pádraic Súilleabháin (Colin Farrell). Pádraic is completely flummoxed by this abrupt rebuff and has no idea why his friend won’t talk to him. The mystery of why Colm stopped talking to Pádraic and the disturbing events that unfold as a result are the driving force undergirding writer/director Martin McDonagh’s dark comedic tragedy of former friends falling out and feuding.

McDonagh, who directed the tense Oscar-winning drama Three Billboards Outside Ebbing, Missouri (2017), first worked with Gleeson and Farrell on his crime caper In Bruges (2008) about the misadventures of two hitmen experiencing personal angst after a failed hit as they await new orders from their mob boss. With The Banshees of Inisherin McDonagh again provided Gleeson and Farrell an opportunity to play off each other as actors and show their considerable skills. With an additional fifteen years of experience under their belts and now clearly at the top of their games Gleeson and Farrell, as Colm and Pádraic, turn in tremendous performances full of tension, suspense, and poignant bleak melancholy. Kerry Condon and Barry Keoghan provide two equally strong supporting performances as Pádraic’s well-read sister Siobhan Súilleabháin and the socially awkward simpleton Dominic Kearney the son of the local police man Peadar Kearney (Gary Lydon).

In an island community with one pub and one church small town country life means everyone knows everyone and everyone’s business making paramount the need for a good reputation. The Banshees of Inisherin makes for an excellent meditation on the Eighth Commandment: You shall not give false testimony against your neighbour. What does this mean? We should fear and love God so that we do not tell lies about our neighbour, betray him, slander him, or hurt his reputation, but defend him, speak well of him, and explain everything in the kindest way.[1] The folk musician Colm, struggling with despair and feeling time slipping away in his later years, sacrifices the reputation[2] of his friend Pádraic to provide himself more time to write music which in turn will improve his own reputation as a fiddle player perhaps even beyond the grave. Colm’s change of opinion and local gossip call into question whether his former friend Pádraic is “nice” or simply “dimwitted and dull” throwing the man into a state of existential crisis.

Without Colm to drink with at the pub Pádraic spends more time with Dominic who, in a hypocritical and ironic twist, he considers poor company due to Dominic’s dimwitted nature. But beggars can’t be choosers, so Pádraic makes do with this questionable friendship. For his part, Dominic is happy to be closer to Pádraic as it provides him the opportunity to attempt a relationship with Pádraic’s sister Siobhan. McDonagh deftly implies Pádraic and Dominic’s strained shallow ‘friendship,’ is a kind of reflection of Colm and Pádraic’s prior friendship; the dramatic irony is that the audience can see this but poor Pádraic cannot. Betrayed, hurt, and slandered Pádraic still seeks to reconcile with Colm but matters are made worse when Colm threatens to cut off a finger from his left hand, his fiddle hand, with a pair of shears each time Pádraic bothers him.

When confronted about this threat Colm claims all he wants from Pádraic is silence to which Siobhan responds, “One more silent man on Inisherin! Good-oh! Silence it is, so.” Colm replies, “This isn't about Inisherin. It's about one boring man leaving another man alone, that's all.” In a fit of exasperation Pádraic’s sister responds, “One boring man! You're all feckin’ boring! With your piddling grievances over nothin'! You're all feckin’ boring! I'll see he doesn't talk to you no more.” The Banshees of Inisherin deals with the flipsides of humility and pride, what people think of themselves and what they think of others, and how they are tempted to puff themselves up at the expense of others (Romans 12:3).

A claustrophobic cloud of despair hangs over the island community effecting the wellbeing of the state of its souls. In a way this is embodied by the island’s crone, Mrs. McCormick (Sheila Flitton), whose presence and words often portend tragedy; McCormick herself acts as a kind of warning of what Siobhan’s future life will be like if she doesn’t escape the island. But how does someone escape the island without moving away? Apparently escape happens either in good-humoured days of pints and songs at the pub with friends, like Colm and Pádraic formerly enjoyed, or in death. A theme of suicide weaves and looms throughout the film and the temptation to suicide is amplified by hopelessness and loneliness: having friends or a spouse, having the gift of a good reputation, even having rewarding work provide a remedy for this sort of despair. The Banshees of Inisherin digs into the dangers of someone losing these. When folks on Inisherin lose hope and the mind turns to death then suicide becomes the pestilence that stalks in darkness, the destruction that wastes at noonday (Psalm 91:6). Christians faced with these temptations are best served by retreating to the community of the church and turning to God for comfort and peace. While McDonagh includes the local Roman Catholic congregation in his film it’s mainly for laughs rather than solace. The Parish Priest (David Pearse) says mass and hears confession but the Church is not a beacon of forgiveness and comfort, it’s just another locale for gossip; Colm, Pádraic, Siobhan, and Dominic are not shown finding peace in the host or chalice of the Lord’s Supper any more than they can find it in the sherry or pints served at the pub run by Jonjo Devine (Pat Shortt).

While Christian faith is part of the fabric of life for the folks of Inisherin McDonagh seems to have a pragmatically low opinion of it. The truth however, apart from this film, is that there’s inestimably more consolation available in a congregation where the Word of God and the means of grace in the Sacraments are provided than will be found at the pub, regardless of how enjoyable the pub may be in the moment. If Colm, Pádraic, Siobhan, and Dominic, or even Mrs. McCormick for that matter, all found their peace in Christ, and by extension in each other as brothers and sisters in Christ, then The Banshees of Inisherin would be a different kind of film: It would not be a tragedy it would be an inspiration.

What does the film’s title The Banshees of Inisherin mean? In a pivotal bit of dialogue Colm says it’s the name of the tune he’s writing but Pádraic is incredulous believing there are no banshees on Inisherin, to which Colm replies, “I don’t think they scream to portend death anymore, maybe they just sit back, amused, and observe.” This tip-off tells the audience that the devil has been in the details all along and there may in fact be a spiritual dimension to the oppression and despair plaguing the folks of Inisherin, one they aren’t wholly aware of: a danger driving and egging on the madness. Historically a banshee is a female spirit in Gaelic folklore whose appearance or wailing warns a family that one of them will soon die. While winks and nods to this classical understanding are peppered throughout the film, confirmation of this in the very manner Colm describes, comes in the final scene before McDonagh cuts to one last aerial shot of the island.

For adult viewers tired of shallow trite agenda-driven spectacles, The Banshees of Inisherin is a thoughtful introspective film experience, with poignant rich performances. It takes friendship and loneliness seriously and is an honest investigation of how, “desire when it has conceived gives birth to sin, and sin when it is fully grown brings forth death” (James 1:15). This is not light escapism; Colm and Pádraic’s falling out could even be read as an allegory for the Irish Civil War itself. Peel back the humorous surface and lurking under the placid waters and green pastures of Inisherin is a rather insightful look at the fallen nature of mankind deeply in need of redemption. However, viewers will need to provide the hope of redemption as McDonagh denies this reprieve from despair. Without such knowledge of redemption, The Banshees of Inisherin may be too dark for souls already struggling to cope with the harshness of life.

[1] The Eighth Commandment, Luther’s Small Catechism, Concordia Publishing House 2017, Page 14.
[2] Explanation of the Forth Petition of the Lord’s Prayer, Luther’s Small Catechism, Concordia Publishing House 2017, “What is meant by daily bread? Daily bread includes everything that has to do with the support and needs of the body, such as food, drink, clothing, shoes, house, home, land, animals, money, goods, a devout husband or wife, devout children, devout workers, devout and faithful rulers, good government, good weather, peace, health, self-control, good reputation, good friends, faithful neighbours, and the like.”