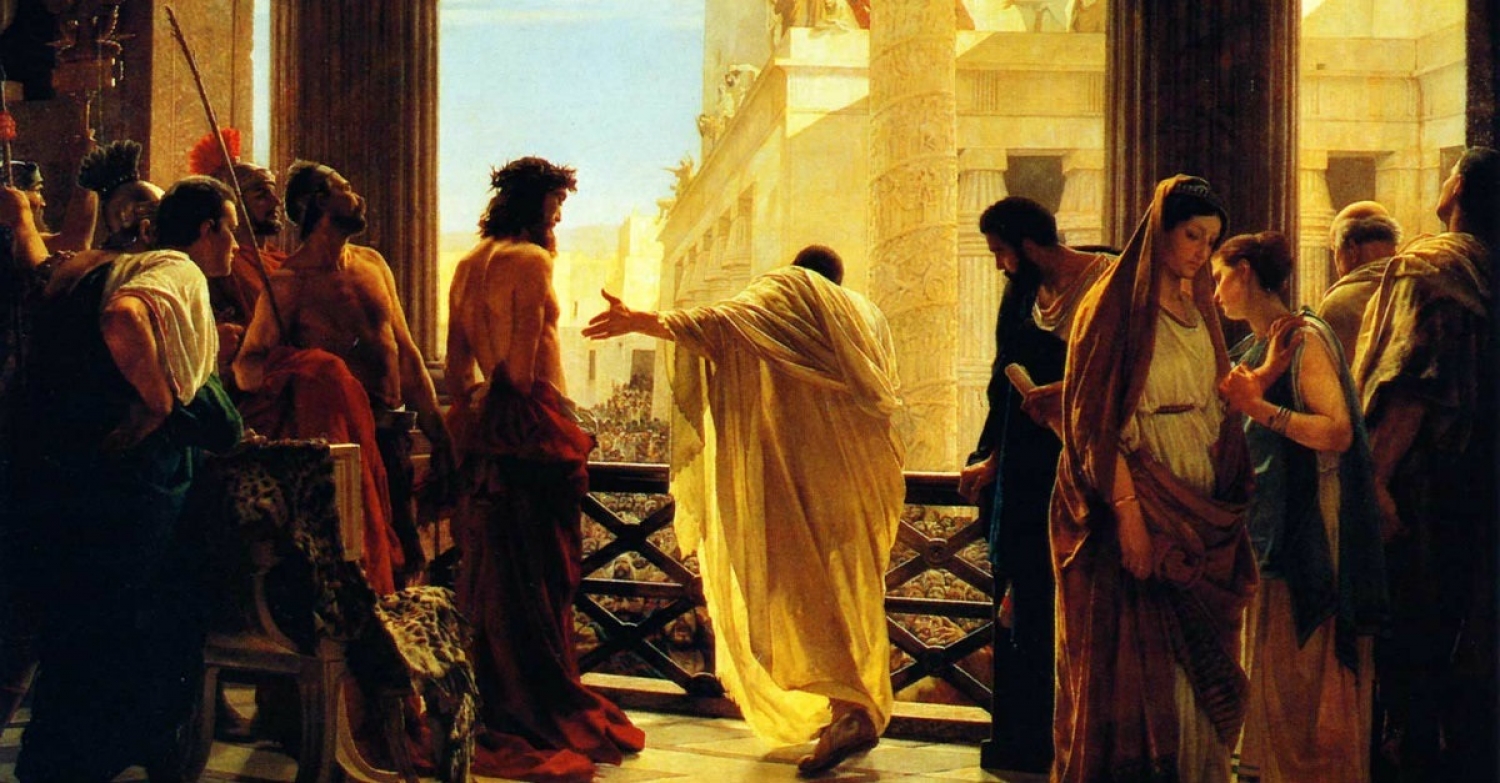 Now at the feast the governor was accustomed to release for the crowd any one prisoner whom they wanted. And they had then a notorious prisoner called Barabbas. So when they had gathered, Pilate said to them, “Whom do you want me to release for you: Barabbas, or Jesus who is called Christ?” For he knew that it was out of envy that they had delivered Him up. Besides, while he was sitting on the judgment seat, his wife sent word to him, “Have nothing to do with that righteous man, for I have suffered much because of Him today in a dream.”

Grace peace and mercy to you from God our Father and from our Lord and Saviour Jesus Christ. Good Christian Friends. Pilate would have condemned many men to death in his life. Either by the tip of his sword, as he rose up through the ranks of the Roman Imperial Army, or by the tip of his pen or tongue now as the prefect of the Roman province of Judaea. St Paul would later famously remark that “the wages of sin is death,”[1] and in Pilates life he had paid out that wage many times to many people and himself had not yet collected it.

Every last one of the people whose life had hung in the balance before Pilate, whether for a moment or for hours at trial, had had death coming to them eventually; even Barabbas who was spared crucifixion that day we call Good Friday would eventual die his own death the death that was coming to him. And it’s fair to say that many of the ones who died under the hand of Pontius Pilate were unjust men who had death coming to them sooner rather than later for their words, deeds and actions, for their sins in this life, but this Jesus, this Jesus was not like the rest of them. Even Pilate could see that this Jesus was not a man worthy of crucifixion that day.

Last night, in our Maundy Thursday Service, in our penultimate Sermon in our Lenten Sermon Series, which we’ve been hearing at Mount Olive throughout this season of Lent; Pastor Albrecht talked about how important the person saying something is to the one who hears what is being said. All of these sermons which, you can go back and listen to on our website, revolve around people saying the truth sometimes spoken unwittingly or even by often hostile individuals. If someone say the truth to you but you do not like or love the person that says it, it can be a lot harder to hear the truth of what they are saying and vise versa if the person is someone you like, and especially if it’s someone that you love, if they say something true to you, you will be much more likely to hear the truth of what they say very clearly.

The Roman Governor Pilate knew that it was out of envy that the Sanhedrin, the Jewish High Priest Caiaphas, and all the other chief priests and scribes and elders of the people along with many other Sadducees and Pharisees had delivered this Jesus up to him for death and Pilate seemed already disinclined to put Jesus to death. He thought that if he had this Jesus publicly humiliated and beaten within an inch of His life that then this crowd of vipers would be satisfied and he could release Jesus, who knows this Jesus might even recover from His beating and live, but the crowd would not relent. Pilate’s ears were filled with the fervent cry of the crowd, “crucify Him.” As we heard in our readings today Pilate had spoken with Jesus and after speaking to Jesus Pilate had said to the crowd that he, “found no guilt in Him.” All of this leads us to a message, a word delivered to him by courier.

As Pilate was sitting on the judgment seat, his wife sent word to him, “Have nothing to do with that righteous man, for I have suffered much because of Him today in a dream.” We have no idea what her dream entailed or why it caused her such suffering, but what we have here is a word of confirmation from Pilate’s wife to Pilate’s ears. The woman he had married, the mother of his children, the one he shared his most intimate moments with called this Jesus a “righteous man” and Pilate himself had been coming to that same conclusion. When Jesus had said to Pilate, “For this purpose I was born and for this purpose I have come into the world—to bear witness to the truth. Everyone who is of the truth listens to My voice.”[2] Pilate had responded by asked the question of Jesus, “What is truth?” And now with these words from his wife Pilate was having the truth confirmed to him. In John’s Gospel prior to Jesus’ arrest in the garden of Gethsemane on the Mount of Olives across the Kidron valley from Jerusalem Jesus had said to His disciples that He was “The Way, the Truth and the Life.” With this truly righteous man what would Pilate do? He was undeserving of death and Pilate knew it, his wife had confirmed it with her words to him, but there he sat on the judgment seat with the echoes of the words of the Jewish chief priests crying out, “Crucify Him, crucify Him!”[3] And still they cried out, “Away with Him, away with Him, crucify Him!” … [and], “We have no king but Caesar.” So, [the Gospel of John says Pilate] delivered [this Jesus, this righteous man] over to them to be crucified.[4]

The Gospel of Matthew, in which we have this detail about Pilate’s wife sending word to him as he sat in judgment over Jesus, gives us this account of Jesus’ verdict before the Children of Israel, St. Matthew writes, “So when Pilate saw that he was gaining nothing, but rather that a riot was beginning, he took water and washed his hands before the crowd, saying, “I am innocent of this man's blood; see to it yourselves.” And all the people answered, “His blood be on us and on our children!”[5] Again they didn’t fully comprehend or understand what they were saying, they were saying ‘put this righteous man’s blood on us and on our children.’ Pilate had heard the true word from his wife, he had heard the word from Jesus who is Truth and Pilate wanted nothing to do with the guilt of shedding Jesus’ blood. Yet all mankind, each and every one of us from Adam and Eve to you and me and beyond, including Pilate and the crowd that day that called for His death are guilty of His death. Jesus this righteous man didn’t deserve death, we do, St. Paul would later write that, “all have sinned and fall short of the glory of God,”[6] and he quotes King David the Old Testament Psalmist who writes of humanity in Psalm 14, “They have all turned aside; together they have become corrupt; there is none who does good, not even one.”[7]

Now there may be one or two men that you have known in your life that when compared to other men you might say that they are righteous men but if you then took them and stacked them up against Jesus they would fall short of His crucified glory, even the most righteous of them would instantly appear corrupt when compared to Jesus. He is the one man who truly was without sin of His own, the one and only man who lived and died a righteous man through and through. Pilate’s wife was right in her estimation of Him, and Pilate was right to have washed his hands of Jesus’ death. Yet while Pilate symbolically washed his hands of Jesus’ blood the blood of Jesus truly ended up on Pilate’s hands, it ended up on the hands of the crowd who shouted for Jesus’ death and on your hands too, on the hands of all people. Just as Pilate’s sins in life, and the sins of the crowd who shouted for Jesus’ death and your sins too, and the sins of all people ended up on Jesus as Paul says in 2 Corinthians, “For our sake [God] made [Jesus] to be sin who knew no sin, so that in Him we might become the righteousness of God.”[8]

Jesus the very Son of God, was conceived, and born without sin, lived without sin and died without even one sin of His own, yet on Him was placed every one of your sins and as He took from you your evil, your sin, your wretchedness of thought word and deed, your every sin, He gives you in return His goodness, His sinlessness, His righteousness; His every good and God pleasing thought, word and deed. His holy blood is a curse to all who hate this righteous man Jesus and a blessing to all who love Him and have been given to Him by His Heavenly Father. His righteousness in The End, on The Last Day, the Day of His returning, will condemn or it will save.

St. Peter would later write about Jesus’ crucifixion like this, “[This righteous man Jesus] committed no sin, neither was deceit found in His mouth. When He was reviled, He did not revile in return; when He suffered, He did not threaten, but continued entrusting Himself to Him who judges justly [to God His Heavenly Father]. [Jesus] himself bore our sins in His body on the tree, that we might die to sin and live to righteousness. By His wounds you have been healed. For you were straying like sheep, but have now returned to the Shepherd and Overseer of your souls.”[9]

Dear ones, your righteous one, Jesus, has paid the wages of your sin with His innocent blood and now in His resurrection from the grave, which we will anticipate at the Easter vigil and will celebrate on Sunday morning He gives you in return His righteousness and eternal life, a free gift that you do not deserve, have not earned or won for yourself, given to you out of His great love of His Father and His great love for you. Go in peace your sins are forgiven. Amen.