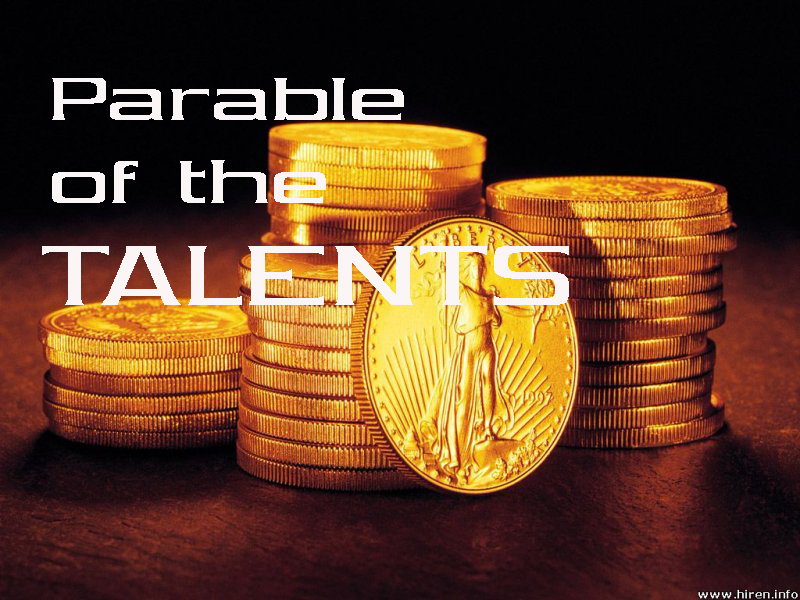 A man going on a journey called his servants and entrusted his property to them. To one, he gave five talents of money, to another, two talents, and to ano­ther, one talent, each according to his ability. Then he went on his journey.(N.I.V.)

Living the Christian life means receiving from God’s bountiful hand. When you think about it, God-pleasing management of His gifts begins the moment we receive from Him. This morning, we focus our attention on the management of God's gifts – all of His gifts. In Matthew, chapter 25, we find several parables that deal with our Lord’s return. These parables are often chosen as Bible texts for these last weeks of the church year – as we approach the season of Advent. These parables remind us to be ready to meet the Lord Jesus when he returns – whenever that might be. Jesus’ Parable of the Talents reminds us that, as believers in the Lord Jesus Christ, our whole life is, in reality, a life of stewardship.

Let me begin with a definition. Stewardship is the management of resources that belong to someone else. A business writer defines management as,

“The marshalling of scarce resources with the intent of accomplishing a specific goal."

Jesus’ parable of the talents isn’t about business or commerce. It’s about the Kingdom of God. It’s about living out the Christian life – that amazing, abundant life, we enjoy in and through Jesus Christ. In some ways, God's people are in the "business," and I put the word in quotation marks, of look­ing after His gifts.

Jesus’ Parable of the Talents begins with the words I read for you a moment ago. A man went on a long journey. But before he left, he called three servants to­gether and made an agreement with them. He agreed – before he left – to give each of them a share of his assets. And they, in turn, agreed to look after those resources until his return. When the Master returned, they would get together and see what had been accomplished. You may have already noticed something interesting about this parable. You may have already noticed that the master gave a different amount to each of the servants. We're told in the inspired text that he gave to each one "accord­ing to the servant’s ability." In other words, the Master gave each servant an amount they could personally handle. The decision as to who got what was entirely the Master’s responsibility.

The word for “servant” in the original language refers to an individual entrusted with the affairs of their Master's household. These servants were, in a very real sense, trustees of their Master's estate. This was a posi­tion of high honor, of extraordinary trust. Lutheran Bible scholar Gerhard Lenski tells us that for the Master to turn this wealth over to those who were nothing but slaves implied that he was honoring them with a very great trust. Down through the years, Christians have wondered what the "talents" in the para­ble were. Here in our text, a "talent" isn't a special ability, as the English language implies. It’s actually a unit of weight – about 75 pounds. The point of Jesus’ parable – the part of the parable that would catch the attention of his original hearers, is that the Master was exceedingly generous. He was taking a huge risk. He gave his servants huge sums to look after for him. In today's world, the amounts would be in the millions of dollars. But the “talents” in Jesus’ parable represent more than just money. They represent ALL the gifts we receive from God – gifts of TIME, and TALENTS, and POSSES­SIONS, AND also, the gift of SELF. They include God’s gifts of His Word and the Sacraments, the Church and all of His people – in short, all of the amazing blessings God gives us by His grace.

God’s people, as they get older, learn that one of God's most important gifts is the gift of time. All the hours and days of our lives are God's gracious gifts to us. God’s will is that we "spend" our time wisely. Once it's gone, we can’t get it back. God’s gifts also include spiritual gifts as well as nat­ural abil­ities. God wants us to use our abilities for our good and for His glory. God also gives us our posses­sions. They may be spir­itual or they may be material. Our most pre­cious spiritual possession, of course, is the gift of salvation that Jesus Christ earned for us at the cross and that was validated at the empty tomb. Our material possessions include goods, and money, house and home and our health. It's inter­esting that most people, when they hear the word “stew­ardship,” immediately think of material possessions and forget that God’s will is that we also manage our spiritual possessions for him.

In Jesus’ parable, the Master’s talents were distributed among three servants. The Master then left on a long journey. He expected that his servants would be faithful – that they would take care of his possession things until he got back. So what happened? We are told in Matthew chapter 25, verses 16 and 17:

The man who had received the five talents went AT ONCE and PUT HIS MONEY TO WORK. He gained five more. So also, the one with the two talents gained two more.

In the business world, managers are concerned with what they call R.O.I. – return on investment. In the spiritual world, our Lord is interested in the same thing – in the return on his spiritual investment in us. According to the parable, the first servant acted without delay. His management skills enabled him to double his master's invest­ment. It was as if that first servant set up a business with borrowed capital and saw that business grow and prosper, with the Lord’s blessing, and with hard work on his part. The second servant did the same thing. The only difference is that the amount of money he had to work with was less than the first servant had. But the end result was the same: with the Lord’s blessing, and a lot of hard work, he doubled his master's investment.

You know, a lot of people think that the Christian faith is only concerned about believing the right things. The fancy word for that is “orthodoxy.” A lot of people forget that the Christian faith is also concerned about right behavior – scholars call this “orthopraxy.” Some are convinced that if Christians just believe the right things, that’s enough. People like this often keep their faith separate from their behavior. But true Christianity is a coin with two sides. It’s believing – there’s no doubt about that. But it’s also doing. The Apostle James famously said that “faith without works is dead.” Jesus’ Parable of the Talents is about doing the right things. The "believing" is pre­supposed.

Peters and Waterman point out that good management is "value driven." It takes place in the context of company policy that stresses quality and excellence. Good management doesn’t tolerate sloppiness. Good management won't tolerate mis­treatment of customers. Christian stewardship is also "value-driven." It’s guided by principles laid down in God's Word. It’s empowered by the Holy Spirit, working through God's Word and the Sacraments. It occurs in the context of the church. Rightly handled, Christian stewardship is a blessing for all involved. It strengthens believers and it builds up God’s church.

So far, we've talked a lot about the two faithful servants mentioned in Jesus’ Parable. But there were three servants in the Parable. In verse 18 of Matthew, chapter 25, Jesus says:

But the man who had received the one talent went off, dug a hole in the ground, and hid his master's money.

Did you catch that? One of the Master’s servants was unwilling to work for him. For whatever reason, he was unwilling to take risks with the investment that had graciously been given to him. So what did he do? He dug a hole in the ground and buried the money. It’s interesting that this unfaithful servant had been given the lightest respon­sibility of the three. But he mishandled even that! And to top it all off, when it came time to give an accounting, he blamed his master for his behavior. He tried to minimize it. In reality, this third servant never understood his master. In is opinion, his master was a hard man to deal with – difficult to please. So he didn’t bother trying. That third servant betrayed his master's trust. He showed a callous lack of love and concern for his master. As Jesus was quick to point out, this third servant didn't even do the minimum, which would have been to put his master's investment in the bank and let it draw interest. He didn't even give what belonged to the Master to someone else and have them look after it. He just buried it! And by doing that, he took it out of circulation so that no one got any benefit from it. Not him, or his Master, or anyone else.

This man’s own words condemned him. His faith, if we can call it that, was without works. And faith like that, according to the Apostle James, is dead. This third servant didn't make use of the gifts that were given to him by grace. He betrayed his Master’s trust – a very serious matter. William Thomas Morton, 29 years old, once stood in a court accused of betraying a trust that had been given to him. A newspaper article said:

A man accused of murdering his great aunt described to a jury ... how he progressed from helping two elderly women with their bank accounts to helping himself to their funds. Morton said he constantly ran errands, did odd jobs, and provided company for the two sisters after he moved to Vancouver from Montreal. Because of one woman's failing eyesight, he said he would prepare cheques for her to sign when she paid utility bills.

He said he once made an error in the amount to be paid and instead of bothering her, forged her signature on a cheque in the correct amount and it cleared. Morton said he eventually took a total of $35,000 from the bank account to pay his own bills incurred in living a more extravagant life than he could afford.

Betrayal of trust is a very serious matter. In the secular world. And in the Kingdom of God.

God holds us respon­sible – accountable – for what we do with his blessings. In Jesus’ parable, the master, as promised, re­turned "after a long time."The first two servants, as we have seen, doubled their master's investment. They had proved them­selves worthy of their master's trust. And, as you might expect, they received glowing words of praise. You know, there's a lesson taught in this parable that isn't im­media­tely obvious. And it’s this: God doesn't expect the same results from every Christian. Aside from salvation, He doesn’t give all of us the same gifts. He wants us to be faithful with whatever we receive from him.

Peters and Waterman, the business writers I mentioned a moment ago, say that human beings want two basic things in life. First, we want to be part of something important. And secondly, we want to be recog­nized for our accom­plishments. In the Christian church, both of these needs are met. As God's people, we are definitely part of something big and successful. We are part of the Christian church. It has grown from a small group of disciples to a world-wide organization made up of billions of people. As Christians, we also receive recognition for our accom­plishments as stewards of God's gifts. May we know the joy and satisfac­tion that comes to those who faith­fully manage God’s gifts. Amen.

Let's Pray: DEAR HEAVENLY FATHER – Open our hearts and our hands to receive from you. Enable us to be good managers of all the gifts and blessings you have entrusted to us. In Jesus' name we pray. Amen. 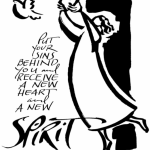