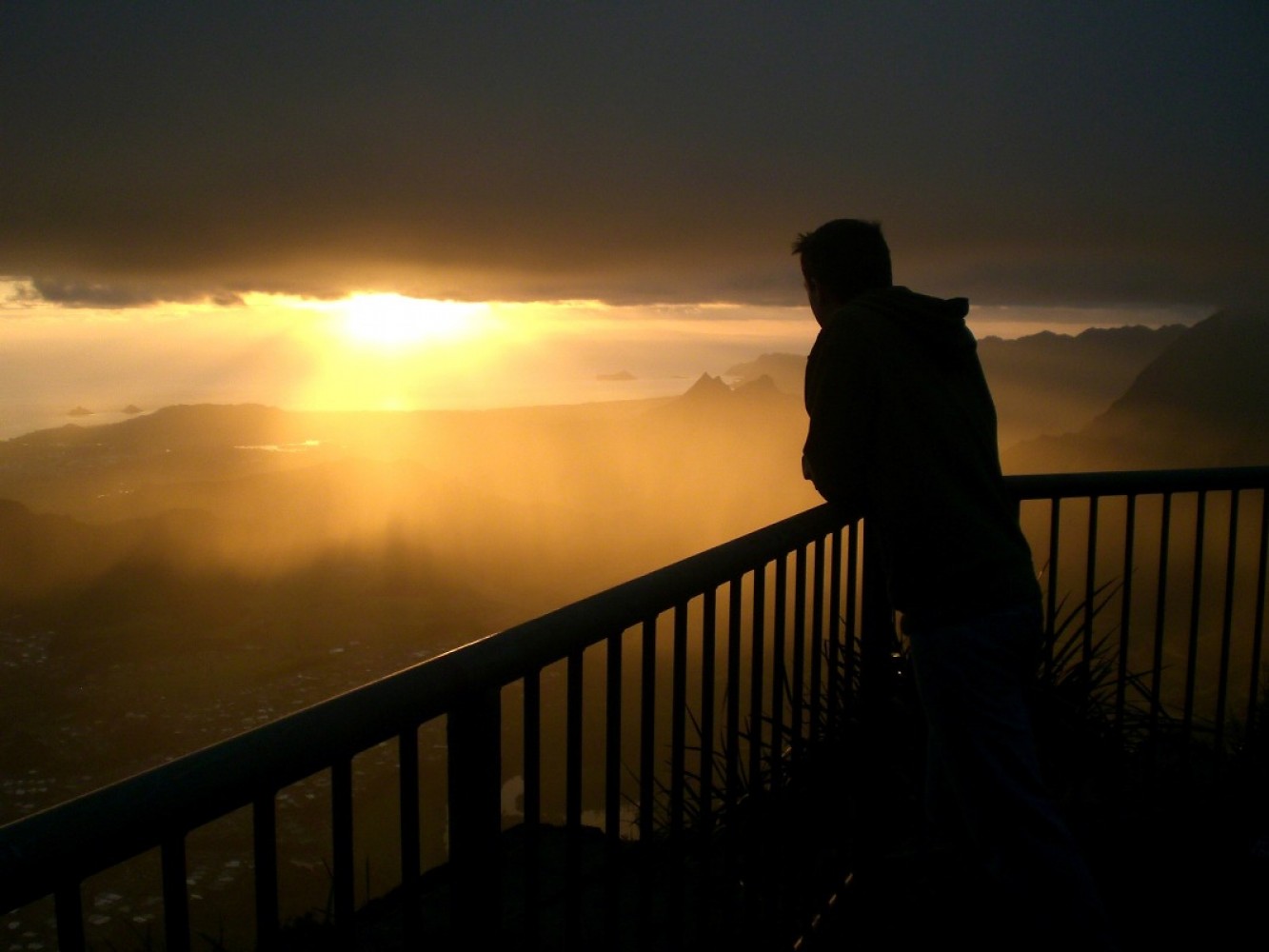 Intr –  I am sure that if I ask you: “What is a bore?”, you will not only have the answer for that but probably will also have some images coming to your minds. Well, images is a soft way to say that some faces would immediatelly show up in your minds. We all know someone who is a bore. One at least. Or... maybe our face would show up in some people`s minds...who knows...

But take a look on how a writer from the 1800 defines a bore: “A person who wants to speak when yo want him to listen”. A good, sharp, ironic sentence that couldn`t be more accurate. A person who speaks a lot and all I wanted is that he or she would shut up and listen.

We don’t like to admit it, but that`s precisely the way we sometimes behave in daily life. Actually, it seems to be a widespread disease: too many people talking, too few people listening. We are prone to speak, teach and show `how-tos`. We are slow to just listen and learn. Or even just to stay still and contemplate.

So here we have St. Peter in a one of a kind experience. Once in a lifetime. How wonderful it must have been to be there, at the mountaintop and to be a witness of the Transfiguration of our Lord, which we remember today. The Gospel describes it: Peter, James and John with Jesus. Moses and Elijah appear, the Law and the Prophets. Jesus starts to shine so dazzingly that one could barely look at him. The glory of the Son of Man is shown in full splendor. We run out of words trying to describe it.

But not Saint Peter.

If you allow me – using that definition of the 1800’s, there is St Peter, the bore speaking again. He thinks he must say or do something. I think it was like that kind of anxiety you feel in a place, situation or moment when you are with other people and dead silence comes through. What are your first thoughts? Do you feel completely at ease, like, “I don’t mind the silence. Let`s make it last 10 minutes”? I bet you don`t. I bet we don`t, or most of us at least. Neither St. Peter. We all feel like something must be said or done.

But that was not the case at all. Peter had to do nothing. No need for speaking, acting or babbling. To watch, contemplate, be still in awe, that was more than enough! But he couldn`t refrain hiumself from being as impulsive as we know him, even wanting to make tents so that they would stay there longer - which was not even close to the requirements and the purpose of the event.

So let`s try to get ahold of what he possibly missed in that moment – and certainly learned later on – in the words of Martin Luther. He says:

“Very much is contained in this history.

First, The resurrection of the dead and the future glory and brightness of our bodies are shown. For this was something very remarkable, that Christ was transfigured while yet in the mortal body, which was subject to suffering. What then shall it be, when mortality shall have been swallowed up, and nothing shall remain but immortality and glory?

Secondly, There is added the appearance of Moses and Elijah, who prove by their appearing that they had never really died, and that there is yet another life, besides the earthly life, from which they were transferred.

Thirdly, This appearance teaches us also that we should despise death, and look upon it merely as an emigration or a sleep. In short, this appearance proves that this life is nothing at all in comparison with the future life.

Fourthly, This appearance proves that sin is overcome. For it necessarily follows as an incontrovertible conclusion, that, where death is overcome, there sin is also overcome.[1]

Further on the same text Luther adds: “These things serve to show that the man Jesus is to be taught and believed throughout the whole world: truly God and man, Truly the Son of God and of man, truly the Christ and King, Priest and Lord, promised by God the Father, through the Holy Spirit, to the ministry of the Law(that is, to Moses) and the prophets (that is, to Elijah). He is the one and the sole one in whom there is salvation and life, in whose hand are all things, because He is the Son and Heir(Cf Hb.1:2).[2]
Christ, the Messiah, the Son of God in which the Father is pleased, He is the One. Listen to Him, Peter. Be silent! Stay still and listen. Because after you go down from this mountaintop, down you will go. Down He will go – to the cross. Suffering, crucifixion and death.

So now let`s forget St. Peter for a moment and let`s talk about another bore. This one we know very well. Ah, and we will need a mirror for that. Yes, that`s you and me.

We like to speak. We like to act. We like to be on the move, from here to there, up and down, trying to get ahold of everything possible and afraid to stop for a moment.(wheras when we stop is only to complain how life is so fast and hectic these days...). Like the phrase mentioned before, we often prefer speaking over listening. Acting over being helped. Noise over silence. Am I exaggerating?

Well, I read the other day about an experiment carried out by psychologists at Virginia and Harvard Universities in which they tried to measure the reaction of people to doing nothing. Listen to the headline: “People Prefer Electric Shocks to Being Alone With Their Thoughts”. In 11 experiments reported, most of the participants went from above midpoint in terms of difficulty to below midpoint in terms of enjoyment.

“In the most, ahem, shocking study, subjects were wired up and given the chance to shock themselves during the thinking period if they desired. They’d all had a chance to try out the device to see how painful it was. And yet, even among those who said they would pay money not to feel the shock again, a quarter of the women and two thirds of the men gave themselves a zap when left with their own thoughts. Commenting on the sudden appeal of electricity coursing through one’s body, someone said, “I’m still just puzzled by that.” [3]

This is not that puzzling when we understand the zeitgeist, the spirit of our time. We complain we don’t have enough time to do what we need to, or to relax and be still. But when we do, we often fill it out again with more action. Just because we don`t want to stay still and listen.

That becomes even worse when all this activist lifestyle is also in the realm of faith. That happens when we fail to listen to Christ and His Word to fill in the gaps with our thoughts and ideas on how the world should be, how we should tolerate more and more things that He wouldn`t undergird or how we should be better people. Also, when we fail to contemplate and learn, filling again the gaps with our own portrayals of God`s love and mercy, which not always match with the actual Scripture teaching of God`s love and Mercy. And so on.

The Gospel today calls us to listen to the beloved Son of God. And not only generally speaking, but strictly thinking of the transfiguration, when He left no doubt of his glory. All the splendor of the only begotten Son of Man, our Savior and Redeemer.

From the mountaintop, surrounded by Moses and Elijah, He goes all the way down to the Golgotha, to be surrounded by two thieves. That`s not certainly the image of a Gospel of glory, wellness and constant happiness. But it is surely the image of the Son of Man who gives his Life in our place. The Saviour who makes the light of his forgiveness and love shine from the Cross upon our lives. The Redeemer that makes us, by faith, be assured of the glory of the Easter.

He is the bearer in the place of the bore – all the boring sinful people in the world. He bore his Cross so that we could bear in our hearts the adoption of Children of God. And to be assured that, one day, we will be like Moses and Elijah with our lives hidden away with Christ, in the hope of ressurrection.

Luther, in the text mentioned, wrote also: “But he permitted those three mentioned apostles especially to see this appearance, in order to guard them against the coming offense of his cross and crucifixion. Yet he accomplished little thereby, for they all were offended with him.”   Here we are today, as many times we do, because we want to witness the constant shining of Christ in his Word, in Sacraments. We would almost dwell in this place with our brothers and sisters for a while in the consolatio fratrum, the mutual consolation of the brothers and sisters. So that when we go down from this mountaintop to our cruciform daily life, bearing the cross of the discipleship we may be guarded by Him against the offenses and sufferings we have as Christians.

And when we fail, like the disciples failed, we have the same forgiveness and strenghtening from Him who is our strength and life. When we fall down in fear, frustration and pain,  He stills makes His voice clear to our ears “Stand up and have no fear. I am with you”. We don`t need shocks, cell phones, entertainment to make our lives look fullfilled. We have the Son of God who fullfills our hearts with peace and joy in His love.

Cc – So, if bore is “a person who speaks when we want them to listen”, Christ bore his Cross so that we may become bearers of the name “children of God”. As His children, we want to listen to Him speak. We want to be still and learn in His presence. We wanna be His. So that our lives may be metamorfoo – the greek word for Transfiguration,`to transform” - be transformed daily by his shining Word, reflecting his Love to the World.

[1] And he adds: “But he permitted those three mentioned apostles especially to see this appearance, in order to guard them against the coming offense of His cross and crucifixion. Yet he accomplished little thereby, for they all were offended with him. Yet this appearance had its advantage after the resurrection, and served to strengthen their faith in Christ, that he was the Son of the living God, and that His kingdom must be regarded in a spiritual sense.The whole holy Trinity appears here to strengthen the believers; namely, Christ in his transfigured form, the Father in the voice, and the Holy Ghost in the bright cloud. Moses and Elias appear in order to testify that Jesus Christ is truly the promised Messiah, according to the law (i.e. Moses,) and the prophets, (i.e. Elias.) Compare Romans 3:21-22, and on the meaning of this transfiguration 2 Corinthians 3:7 ff.”
(Luther’s Explanatory Notes on the Gospels, pp. 101. http://steadfastlutherans.org/2016/01/luthers-notes-on-the-gospel-transfiguration/)

[2] Also: “so that every Simon son of bar-Jonah is blessed (Cf Matth 16.17) who, trusting in this revelation of the Father, shall confess Him openly and in public. For no other name under heaven has been given to human beings by which they may be saved (Acts 4:12)”
(Luther`s Works. Annotations on Matthew Chapters 1-18, p. 311)