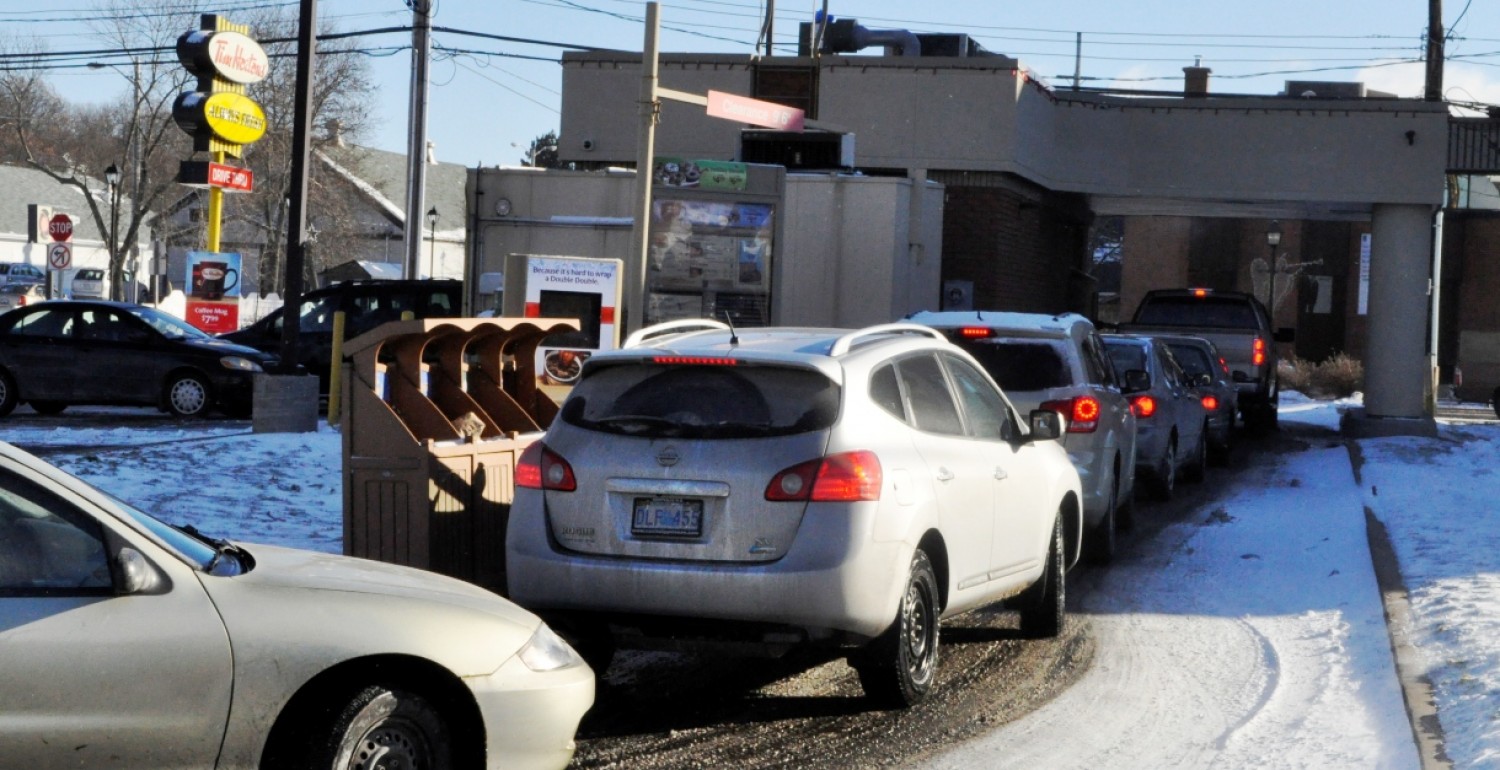 Intr – As a teenager, I worked on a grocery store. From my 13 to my 17 years old I would daily go to the place downtown where I worked first part time, and after some time in a full time position. There are many stories that can be shared from that period in the late 80`s and early 90`s, but the one I want to share today has to do with my bus rides. There was this bus that I took for quite a few months in which upfront near to the driver, there was this sentence that stuck in my head: “My attitude depends on yours”. That meant that the driver would treat you as you treated him.
At first, that seemed to me pretty fair. If you are nice, I will be nice with you. But if you hop on yelling at me or something, be prepared for the payback. Lex talionis. The law of retribution. An eye for an eye. In that case, a word for a word. Or maybe something worse.
But eventually that sentence started to discomfort me. Something was not quite right with it. And as I grew not only in height but also in some knowledge of life, that became quite clear: If my attitude depends on other`s behaviour, what kind of life can I have?

1 – Depending on others?
I think that that`s pretty much what Jesus us addressing in today`s Gospel. It`s His Sermon of the Mountain and He is speaking directly to people`s daily life.
He is not speaking as a judge, a lawyer or a MP. As one of our Seminary Professors, Dr, Jeffey Gibbs, on his Commentary puts it, “Jesus is not comndening civil rights. He is talking to Christians about Christian life and where do they motivation to do things come from. The intention of Torah was not trying to get even with everybody and assure one`s own `rights`.
(GIBBS, Jefrey. Concordia Commentary. Matthew 1-11, p.302-3)] *1

So Jesus is not preventing you of pursuing civil rights. That`s is not the point here. The point is to call his disciples, (again quoting Dr. Gibbs) :”to lives of reckless generosity and naivete. His teaching is hyperbolic – but that doesn`t mean he is not serious. His words are to reform our instincts, our quick reactions, our unwillingness to sacrifice”.
I would put it this way: Jesus is making us see where our dependence is - is it in others attitude, humor or ideologies? Or is it based on the principles of His Word?
Because what can be said about a Christian life style that goes: “Do and I`ll do. Be nice and I`1l be too.”? Well, that`s what Jesus says even the pagans do. Can it show the presence of the Holy Spirit in our hearts and lives?

2 – Depending on me?
“OK, pastor, so you say I am not to depend on other`s attitudes and principles. That means that I must depend only in myself and the good principles and intentions I have deep in my heart.”
Well...missed point again. Do we think that`s actually possible? Can I depend on my habilities and strenght? Of course not. We are sinful by nature, weak by definition and acting sinners by a simple look at our daily lives. All we can do when we depend upon ourselves is to produce more evil.
Unless.... unless... I am the one who defines what is good or what is not; what it means to be a person who is on "the good side” and what are the ones who are in the “bad side”. And we see a lot of it. For example:
“-I adopt abandoned dogs. I Stop for people to cross the streets.. I support the `all forms of love are valid` slogan. I even separate my garbage adequately. Does my neighbour do sometihing like that? Surely not...” And then we list the things others do that do not match with our concept of good deeds.
To depend on me? Well, that`s not the way at all too. Think for a minute: what do you have in yourself that would guarantee good attitudes all the time? I can make a guess: nothing. “But pastor, and what about all those people who do not believe in Christ but still have good attitudes, sometimes emabarassing even christians?” This is a good point for another sermon. But for now, it is important to quote Hebrews for that matter: without faith, it is impossible to please God. *2
Also, let`s think for a moment: What if God would go like: "My attitude depends on your behaviour?" What kind of things we would get from Him? We already know. And all of them can be summed up in a sentence: being eternally away from His presence.

3 – Depending on Christ!
But we know He didn`t. His attitude was based exclusively on His love for us. For all mankind. He decided to cast all what we deserved upon his Son Jesus Christ. God said: “My attitude will be to send my son to behave in your place, so you might have forgiveness of sins and eternal life.” And He came. Jesus came to act in LOVE. He could have paid back. He could have acted with those who condemned and crucified Him in the same way they acted with Him. But He acted in love, for you and for me.
Now we are grounded in Christ, rooted in his love. We are His own. We belong to a God who do not react to sin as it would deserve. But He embraces us on His kindgom of love. So that we may be called His children. Family of faith.
Let`s make a pause here to retrieve verse 45, when its said that this way we will “become children of God”. Well, doesn`t that go head on to what we always learned, that we don`t do good deeds TO be accpteed, but BECAUSE we are already accepted? So now, is Jesus saying that I must somehow deserve my faith and salvation?
Of course not. Otherwise he will be contradicting himself in one of the clearest Scripture texts. John 3.16. Christ is telling us that when we don`t let our attitude depend on others, but flow from God`s principles, we will show them how to be a Child of God is. By our fruits they will know the Father.
As children of God, we depend on God`s grace for salvation and we depend on this love as a principle to guie our deeds. And that`s precisely what will allow us to offer the other cheek, the extra mile... We will act guided not by other`s humor, temperament, ideologies, but by God`s principles grounded on His Word.
So here`s something where important: Jesus didn`t tell you to imitate our neighbour. He tells you to LOVE him/her. That`s a principle, not a mood.
Sometimes we go like: “I don`t like him because of this or that; that person is annoying; that guy or girl is to grudgy for me to even try to get closer.” Yeah... (and often times, WE are that very person!..) But still, God sends us to take principle-based attitudes. So they would not be self based attitudes, not others-dependant attitudes, But Christ rooted acts of love toward even our enemies. That`s what the Gospel of Christ is sending us to - to serve our neighbour based not on his attitude, but on the principles that He has already laid down for our lives.
So why would you do something like the Gospel for today calls you to? Because you want to serve. People will think it`s crazy. The “good doers” of our time will think is crazy. Even some of our friends of relatives will think it is. But that is the Gospel. Craziness for human mind. Salvation for the human heart.
Will we fail? Of course we will. Will we be stoned and brushed off for that? Of course not. We are not here talking about the online world, particularly social networks, where if you make a mistake people not only have “my attitude depends on yours” way of typing but simple overreact, almost sending you to hell. We are talking about God`s love and promises, which we have in his Word to strenghten us and in his blessed Sacrament, where we come for forgiveness of sins, salvation and eternal life. Here we come to be reassured of this love and to be remembered: Your attitude depends...on Christ. On His Love, on His Word, on His presence in your heart. That`s the attitude that, by the Grace of God, guided by the Holy Sipirit, we may take, even in face of the rantest words or ugliest attitudes.

Cc – A couple times during this week I thought of paying next person's coffee at Tim Horton`s drive thru. Didn`t do so. On Friday morning someone did that for me. Free coffee. Then, I payed for the next in line. I took action only after someone else did. I wish it had been different... Now, at least that gave me more food for thought on a different angle on today`s Gospel. Sometimes we even wait for GOOD attitudes to trigger our actions.
Jesus invites us to something completely different. That is: to not let other`s attitude to determine ours. Not even our own thougths. He invites us to “be perfect, as our heavenly Father is”, which means to place faith in Him, who has paid our bill in full so that we may have forgiveness of sins and eternal life. That is what to be perfect means – in CHRIST, God sees us cleansed from sin. Then, He sends us to let our faith come to action firmly grounded and propelled by his principles of love and care. So that many people may come to know this kind of life: a life with the joy and freedom of having their attidudes depending only on the grace and love of our Savior Jesus Christ! Amen.

*1 [Kleinig summarizes how the statements about retribution were intended to function, even on the level of legal interactions in non-Israelite societies:
The lex talionis (“law of retribution”), was already elaborated quite explicitly in Mesopotamia long before it was mentioned on the OT. It performed two very important functions there in the ancient Israel. First, it limited the scope for revenge, which always tended to escalate indiscriminately and endlessly on any tribal society. By it, the principle of equivalence was enshrined in the administration of justice. Second, it treated the life and body of every person as equal in value regardless of social, racial,and economic status.
(GIBBS, Jefrey. Concordia Commentary. Matthew 1-11, p.302-3)]