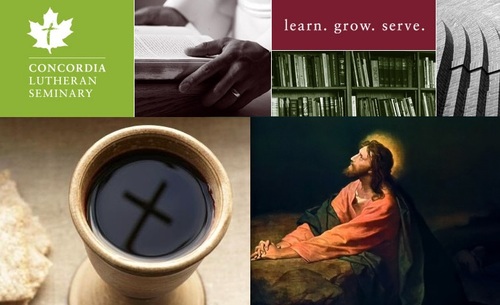 And they were on the road, going up to Jerusalem, and Jesus was walking ahead of them. And they were amazed, and those who followed were afraid. And taking the twelve again, he began to tell them what was to happen to him, saying, “See, we are going up to Jerusalem, and the Son of Man will be delivered over to the chief priests and the scribes, and they will condemn him to death and deliver him over to the Gentiles. And they will mock him and spit on him, and flog him and kill him. And after three days he will rise.”

And James and John, the sons of Zebedee, came up to him and said to him, “Teacher, we want you to do for us whatever we ask of you.” And he said to them, “What do you want me to do for you?” And they said to him, “Grant us to sit, one at your right hand and one at your left, in your glory.” Jesus said to them, “You do not know what you are asking. Are you able to drink the cup that I drink, or to be baptized with the baptism with which I am baptized?” And they said to him, “We are able.” And Jesus said to them, “The cup that I drink you will drink, and with the baptism with which I am baptized, you will be baptized, but to sit at my right hand or at my left is not mine to grant, but it is for those for whom it has been prepared.” And when the ten heard it, they began to be indignant at James and John. And Jesus called them to him and said to them, “You know that those who are considered rulers of the Gentiles lord it over them, and their great ones exercise authority over them. But it shall not be so among you. But whoever would be great among you must be your servant, and whoever would be first among you must be slave of all. For even the Son of Man came not to be served but to serve, and to give his life as a ransom for many.”

But Jesus had in mind a different mountain; the mountain He was striving for was the mountain of Golgotha the place of the Skull,[4] the mountain to which He would drag a wooden cross and in weakness even receive help to carry it;[5] a mountain where He would be enthroned in a glory the World seldom understands, where He would have a throne of wood not gold, instead of gem covered rings on the fingers He would receive rough iron nails pinning Him to the wood, there He would wear crown adorned with thorns and not diamonds, He would have a grand hall filled not with adoring subjects but rather a rocky hillside filled with mockers, spitters, and haranguers.[6] It is in this desolate place of pain and anguish, at the very centre of misery, that the all powerful, all knowing, all seeing, all present LORD of all places Himself. The very worst place ever and He places Himself there for you. James and John in their ignorance seek glory like the World gives, Jesus answers them saying that those two seats are “for those for whom it has been prepared,” at the cross the ones who sit at Jesus’ left and right are the robbers, the thief on the left and the thief on the right.

"Are you able to drink the cup that I drink?"

Jesus said to James and John: “You do not know what you are asking. Are you able to drink the cup that I drink, or to be baptized with the baptism with which I am baptized?” Which is to ask are you willing to die for others as I am willing to die for you? And not a “good” or “glorious” death as the World understands it, but a loathsome and horrid death, the sort that people shake their head at,[7] and ridicule you for, even after you’re dead? And if you were to do this; why? This is the question that races across time to you today! James and John thought that they were able, are you?

Dishonor and humiliation were two of the worst things imaginable in James and John’s world. Their world pushed the earthly prize of honor and glory. Jesus was willing to forgo that earthly prize so you can have a heavenly prize, “where neither moth nor rust destroys and where thieves do not break in and steal.”[8] The World today has, because of Christ, undergone a transformation when it comes to humility, people do prize humility as a virtue. Many people even fake it. What is the equivalent today to honor and glory? What do people value out in the world? Celebrity? Thinness? Beauty? Blind tolerance regardless of morality? What if you were to give up the pursuit of wealth and fame and fitness and politeness, to die a hated, fat, ugly, lonely, poor and overlooked person so that others could have a better life: And not others like your loved ones and friends, but rather, so that, the very ones who hate you could live better lives? Would you take up that cross?

‘Dear Jesus, can’t I just have a smidgen of earthly glory?’ … You may have some, but it is fleeting and will not last, not in this life. In your honest moments you think to yourself, “I’m too proud, I’m too vain, I’m too selfish to follow Jesus” and you’d be right. Dear brothers and sisters in Christ, repent of the sin that impedes your walk along the straight and narrow way, the way that Jesus walked in perfection ahead of you: Cling instead to His cross, His humility, His true glory.

Right before James and John come with their question, Mark’s Gospel says, “They were on the road, going up to Jerusalem, and Jesus was walking ahead of them. And they were amazed, and those who followed were afraid.” Baptized and redeemed child of God! Do not be afraid! Trust Jesus, and Listen! Jesus draws you close and says to you, “See, we are going up to Jerusalem,” We, not I. Jesus is with you in every suffering and He is not one to shun suffering or to avoid it, He took it head on so that you will never be alone in it. Even when death finds you and gums you into its gullet, that bitter enemy whom Christ destroyed on the cross cannot keep you from Him. When the risen Lord Jesus says, “I am with you always, to the end of the age.” He means it.

So how did James and John fair in all of this?

So how did James and John fair in all of this? Saint James was the second martyr,[9] his head chopped from his shoulders by one of King Herod’s executors,  St. John was put in exile where he wrote the book of Revelation,[10] he eventually died of old age, Each of these disciples suffered much for the name of Jesus; they did pick up their cross and follow Christ. Dishonor, death, pain, suffering, nothing could separate them from Jesus. This was not their diligence it was the work of Christ that accomplished it. In Christ, in your baptism, you are the same; return to the LORD your God and take refuge in Him, “for He is gracious and merciful, slow to anger, and abounding in steadfast love;”[11] walk His Way and you will receive a glory the World cannot understand.

Lastly I leave you with this: As the cross loomed near and large upon the way, Thomas who is remembered more for his doubt than his courage once “said to his fellow disciples, [concerning Jesus] “Let us also go, that we may die with Him.”[12] As part of the body of Christ you have died with Christ Jesus upon the cross, you have been buried with Him in the Tomb and on the last day you too will be raised up to a glory the world currently despises and derides. Fear not, have courage, Jesus said, “If anyone would be first, he must be last of all and servant of all,”[13] from John’s Revelation, Jesus also says, “I am the Alpha and the Omega, the first and the last, the beginning and the end.”[14] Remember this and hold fast to it, praying daily: “LORD Help us walk Your servant way, wherever love may lead.”[15] Amen.