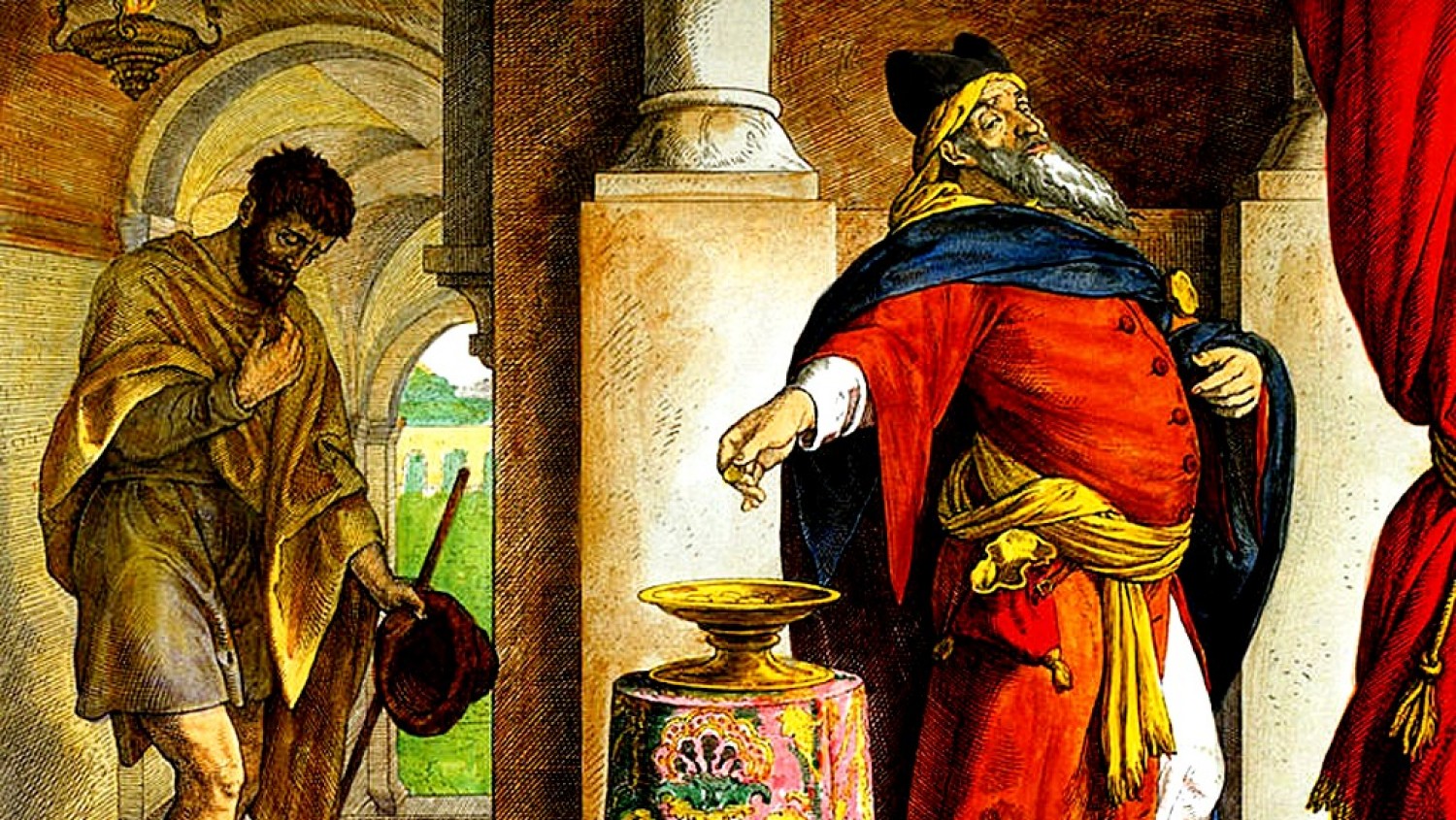 [Jesus] also told this parable to some who trusted in themselves that they were righteous, and treated others with contempt: “Two men went up into the temple to pray, one a Pharisee and the other a tax collector. The Pharisee, standing by himself, prayed thus: ‘God, I thank you that I am not like other men, extortioners, unjust, adulterers, or even like this tax collector. I fast twice a week; I give tithes of all that I get.’ But the tax collector, standing far off, would not even lift up his eyes to heaven, but beat his breast, saying, ‘God, be merciful to me, a sinner!’ I tell you, this man went down to his house justified, rather than the other. For everyone who exalts himself will be humbled, but the one who humbles himself will be exalted.”

Now they were bringing even infants to Him that He might touch them. And when the disciples saw it, they rebuked them. But Jesus called them to Him, saying, “Let the children come to Me, and do not hinder them, for to such belongs the kingdom of God. Truly, I say to you, whoever does not receive the kingdom of God like a child shall not enter it.”

Grace peace and mercy to you from God our Father and from our Lord and Saviour Jesus Christ. Good Christian Friends. In the book Pilgrims Progress John Bunyan writes, "He that is down needs fear no fall, he that is low no pride. He that is humble ever shall have God to be his guide."[1]

Jesus tells the parable that we heard today to some people who trusted in themselves that they were righteous, and who then treated others with contempt. In the parable it is the repentant man - the tax collector - who stood far off, who would not even lift up his eyes to heaven, who beat his breast, saying, ‘God, be merciful to me, a sinner!’ who Jesus said was justified when he went down to his house from the temple. Both men sought Justification from God: The tax collector sought it in the mercy of God, the Pharisee sought it based on his works contrasting and comparing himself to the tax collector. The Pharisee appeals to his personal keeping of the law of God, he comes into God's house claiming that he is no thief, he doesn't sleep around, he's perfectly fair with everyone, and towards God he is faithful in his devotional life, fasting, giving back to God exactly what God desires, a tenth of all he earns. He appeals to his keeping of the law and while he makes his appeal he says "thank God I am not like other men."

In the Small Catechism Luther writes that, "Before God we should plead guilty of all sins, even those we are not aware of, as we do in the Lord’s Prayer." Seeking justification, seeking God's approval by listing off how great you are at keeping His law is a problem. In his letter to the Galatian Christians St. Paul writes that, "no one is justified before God by the law, for “The righteous shall live by faith.”[2] The tax collector is pleading guilty of all sins, even those he is not aware of, he says, ‘God, be merciful to me, a sinner!’ He trusts that God knows the hearts of all the children of mankind[3] and that there is no hiding the truth of what lays in his heart. When he prays, ‘God, be merciful to me, a sinner!’ He has faith that, "The LORD is gracious and merciful, slow to anger and abounding in steadfast love."[4] This is a picture of the repentant heart, "He that is down needs fear no fall, he that is low no pride. He that is humble ever shall have God to be his guide."

As Lutherans we believe, teach and confess, "that men cannot be justified before God by their own strength, merits, or works, but are freely justified for Christ's sake, through faith, when they believe that they are received into favour, and that their sins are forgiven for Christ's sake, who, by His death, has made satisfaction for our sins. This faith God imputes for righteousness in His sight." (AC IV) What does it mean to have righteousness imputed to us? God assigns, ascribes, attributes, accredits Jesus' faultless life and innocent death to you.

This is why our reading ends with Jesus talking about infants in relationship to the kingdom of God. A baby simply receives the gifts given to them by their parents, by the ones who are caring for them. An infant cannot feed itself, cannot get itself to doctors appointments, cannot stand up on their own or change their own diapers; they must simply receive what is given to them. This doesn't mean that they are without sin, for infants are still demanding and self centred, and they do not think of others first, but at the same time they cannot survive based on their own strength, merits, or works. They must simply receive what is given. As we grow older in life and the grip of pride grows stronger it becomes harder and harder to simply receive what is being given. In sin we want to pay for gifts by giving a gift in return, we want to exchange one favour for another, we want to call in our favours, we want to count up our accomplishments, sometimes we are tempted to appeal to our achievements, not for the benefit of others but for ourselves. We want things to be our way. So on the one hand, it is harder for a baby to refuse the gifts of love and kindness given by their parents than it is for them to receive those gifts, while on the other hand, we at our full strength as Adults can stubbornly, pridefully refuse the help of others, even refuse spiritual help from God.

Claiming that we are without sin, claiming that there is some part of us that is pure and holy, apart from Christ Jesus, puts even the most outwardly religious, outwardly devout, person far from the kingdom of God. What does Jesus say? "For everyone who exalts himself will be humbled, but the one who humbles himself will be exalted.” Saint Paul explains that, "In Christ Jesus you who once were far off have been brought near by the blood of Christ."[5] If you make your appeal to your personal keeping of the law you will always fall short and you will be far off, far away from the kingdom of God.

"For" as Saint Paul teaches, "all who rely on works of the law are under a curse; for it is written, “Cursed be everyone who does not abide by all things written in the Book of the Law, and do them.” Now it is evident that no one is justified before God by the law, for “The righteous shall live by faith.” But the law is not of faith, rather “The one who does them shall live by them.” Christ redeemed us from the curse of the law by becoming a curse for us—for it is written, “Cursed is everyone who is hanged on a tree”"[6]

At the cross on Good Friday Jesus took the lowest place, "He humbled Himself by becoming obedient to the point of death, even death on a cross."[7] "For our sake [God] made [Christ Jesus, His only Son] to be sin who knew no sin, so that in [Christ Jesus] we might become the righteousness of God."[8] You have received this in your baptism, you receive this same Jesus at the communion rail today. When you come to the rail simply plead guilty of all sins, even those you are not aware of, do not say, "‘God, I thank you that I am not like other men" but rather simply say, ‘God, be merciful to me, a sinner!’

Lastly remember that, "you have been raised with Christ, [therefore] seek the things that are above, where Christ is, seated [exaltation] at the right hand of God. Set your minds on things that are above, not on things that are on earth. For you have died, and your life is hidden with Christ in God. When Christ who is your life appears, then you also will appear with Him in glory."[9] This is what it means to have the righteousness of Christ, to have your justification in Him. A life built not on our own merit but on His. Amen.