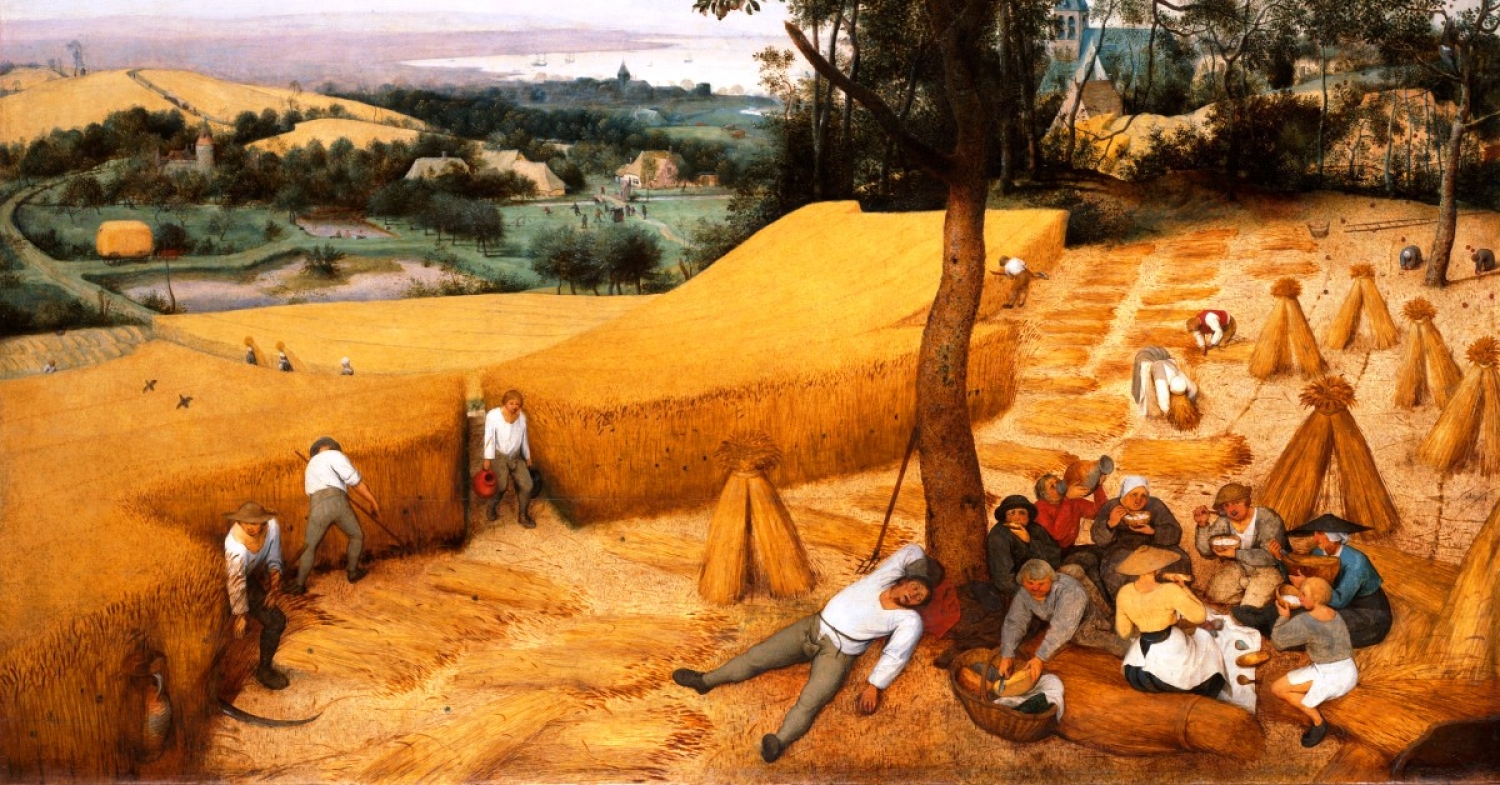 That same day Jesus went out of the house and sat beside the sea. And great crowds gathered about Him, so that He got into a boat and sat down. And the whole crowd stood on the beach. And He told them many things in parables, saying: “A sower went out to sow. And as he sowed, some seeds fell along the path, and the birds came and devoured them. Other seeds fell on rocky ground, where they did not have much soil, and immediately they sprang up, since they had no depth of soil, but when the sun rose they were scorched. And since they had no root, they withered away. Other seeds fell among thorns, and the thorns grew up and choked them. Other seeds fell on good soil and produced grain, some a hundredfold, some sixty, some thirty.  He who has ears, let him hear.”

Grace peace and mercy to you from God our Father and from our Lord and Saviour Jesus Christ. Good Christian Friends. According to the Popular Science website at PopSci.com, researchers from Finland claim that tomatoes fertilized with urine show a four-fold increase in crop yields. And it doesn't end there - the same tomatoes also showed higher beta-carotene than unfertilized ones, and much more protein than traditionally fertilized plants. A panel of (presumably unsqueamish) blind taste testers also attested to the fact that the flavour was just as good too.[1]

Producing a good crop is very important to the one who sows the seeds. And people do all sorts of things to try and get a good yield on their seed “investment” as we just heard – Yet the sower in Jesus’ parable seems to be acting strange. A wheat farmer would avoid, for instance, seeding the grid road alongside the field, and if there was a gravel pit he surely wouldn’t sow seed in there hoping to grow a crop, nor would he seed a bramble full of thorny brushes without first clearing the land and tilling the soil to prepare it. In fact in years gone by, for long hours the children of farmers would scour the fields picking stones to help increase the yield and remove obstacles to good farming and if a farmer honestly thought urine, along with conventional fertilization, might help improve things he’d likely find a way to use that too. Yet the sower in Jesus’ parable seems reckless with his seed, he seems to be sowing just about anywhere? It’s like he’s blind or something, like he has no idea what kind of soil he’s sowing the seed onto? I guess that’s why Franzmann[2] in the Hymn “Preach You the Word” writes, “The sower sows; his reckless love Scatters abroad the goodly seed, Intent alone that all may have the wholesome loaves that all men need.”[3]

Like I said a wise farmer would avoid seeding the road, the gravel pit, and the clumps of trees making up the brush and bush because to do so would be a waste of seed! Yet the preacher who sows the word of God into the hearts of men, women and children doesn’t truly know the condition of the soil upon which the seed of God’s Word would fall! Ah ... now it comes clear. By the Worlds standards the wise preacher, the wise congregation would only sow where the ‘field’ would yield 100 fold in regular church attendance, 60 fold in offerings, and 30 fold in volunteers to help sit on boards and committees and to run programmes like Sunday School; by the worlds standards preacher and congregation should avoid seeding where everyone can see their won’t be a yield! Yet, Saint Paul does not favour Worldly wisdom in such things when he described the faithful preacher of his day as a fool,[4] no Saint Paul makes it clear that, “[he, Saint Paul,] decided to know nothing among [God’s Baptised people] except Jesus Christ and Him crucified,”[5] and that “[preaching] Christ crucified, [is in Saint Paul’s estimation] a stumbling block to Jews and folly to Gentiles,”[6] foolishness to the everyone who isn’t a Jew.

You have known, or if you are young God willing you will know, many sowers of God’s Word here at Mount Olive; Be, in the years to come, an encouragement to these Men, encourage them to be a fool for the Gospel of Christ Jesus; Encourage them to sow the seed of God’s Word everywhere they can, even on the places that appear to be of no use! As the Hymn says, “Preach you the word and plant it home to men who like or like it not, the Word that shall endure and stand When flow’rs and men shall be forgot.”[7]

Does the sower in Jesus’ parable live an anxious life? Does he fear that the seed will be snatched away? Does he stay up nights sleeplessly wondering if the fledgling crop will scorched by the heat of the worlds troubles? Does he fret that the thorns and thistles will choke the Life from the crop? Again Saint Paul gives insight to these questions when he writes, “Therefore, having this ministry by the mercy of God, we do not lose heart. But we have renounced disgraceful, underhanded ways. We refuse to practice cunning or to tamper with God’s word, but by the open statement of the truth we would commend ourselves to everyone’s conscience in the sight of God. And even if our gospel is veiled, it is veiled only to those who are perishing. In their case the god of this world has blinded the minds of the unbelievers, to keep them from seeing the light of the gospel of the glory of Christ, who is the image of God. For what we proclaim is not ourselves, but Jesus Christ as Lord, with ourselves as your servants for Jesus’ sake. For God, who said, “Let light shine out of darkness,” has shone in our hearts to give the light of the knowledge of the glory of God in the face of Jesus Christ.”[8] Saint Paul knows that the task is not to be sneaky or clever, not to be concerned with the yield: for the job of the preacher is to preach, the work of the Lord it to germinate the seed and make it grow, to sustain it, until it bears fruit. Again as the hymn says, “We know how hard, O Lord, the task Your Servant bade us undertake; To preach Your Word and never ask What prideful profit it may make”[9]

This is good advice for preachers and for each of us. Don’t neglect the word of God and don’t despise the preaching of God’s Word,[10] for the work of the Lord carries on in ways we don’t at first see, the seed grows where it’s not always expected and life goes on. Martin Luther famously considered this, preaching in a sermon given in 1522, that His job as a sower of God’s Word was, “In short [this; Luther said], I will preach it, [and I will] teach it ... but I will constrain no man by force, for faith must come freely without compulsion. Take myself as an example. I opposed [the abuses of the Roman Catholic Church], but never with force. I simply taught, preached, and wrote God’s Word; otherwise I did nothing. And while I slept or drank Wittenberg beer with my friends Philip and Amsdorf, the Word [of God did the work]. I did nothing; the Word did everything. Had I desired to foment trouble, I could have brought great bloodshed upon Germany; indeed, I could have started such a game that even the emperor would not have been safe. But what would it have been? ... I did nothing; I let the Word do its work.”[11]

And now we see the hardest part, for we don’t want to let the Word do its work, we want to do the work ourselves (or we at least want to see someone doing it); we want to roll up our sleeves and get out into that field or we want to see someone in the field working hard sweating as they toil. Repent; repent of this and remember; simply sow the seed as commanded and with reckless love the Holy Spirit will work in the hearts of the hearer for “faith comes from hearing, and hearing through the word of Christ.”[12] “Though some be snatched and some be scorched and some be choked and matted flat, the sower sows, his heart cries out, “Oh what of that, and what of that!”[13] “Of all his plenteousness One-fourth waves ripe on hill and flat, and bears a harvest hundred fold: “Ah, what of that, Lord, what of that!”[14]

It’s a good question to ask: What of that? What’s going on with all of this? Jesus equates the seed sown by the sower in His parable with the word of the kingdom; John in his gospel teaches us that “In the beginning was the Word, and the Word was with God, and the Word was God.  He was in the beginning with God. All things were made through Him, and without Him was not any thing made that was made. In Him was life, and the life was the light of men. The light shines in the darkness, and the darkness has not overcome it.”[15] “And [John also teaches us that] the Word became flesh and dwelt among us, and we have seen His glory, glory as of the only Son from the Father, full of grace and truth.”[16] The Seed then is the Word and the Word is Christ Jesus: The Sower sows Jesus; the preacher preaches Jesus into the hearts of all that hear no matter what the condition of the soil of their heart might be: “Preach you the Word and plant it home and never faint; the Harvest Lord Who gave the sower seed to so will watch and tend His planted Word.”[17]

With the sower sowing the seed in the soil without favouritism or constraint, with the picture of the seed being the very Word of God, Christ Jesus our Lord, with all of this in your mind I leave you with this from the gospel of Saint John 12: “He who has ears, let him hear.”

Now among those who went up to worship at the feast were some Greeks. So these came to Philip ... and asked him, “Sir, we wish to see Jesus.” Philip went and told Andrew; Andrew and Philip went and told Jesus. And Jesus answered them, “The hour has come for the Son of Man to be glorified. Truly, truly, I say to you, unless a grain of wheat falls into the earth and dies, it remains alone; but if it dies, it bears much fruit. Whoever loves his life loses it, and whoever hates his life in this world will keep it for eternal life.  If anyone serves Me, he must follow Me; and where I am, there will My servant be also. If anyone serves Me, the Father will honor him.[18]

Remember that in the Gospel of John when we hear of Christ being glorified it always points to Jesus’ crucifixion, the crucifixion that Saint Paul says is a stumbling block to the Jews and foolishness to the Greeks. So go and be a fool for the Gospel and tell people His Word and let God be the one to bring forth the fruit He desires.