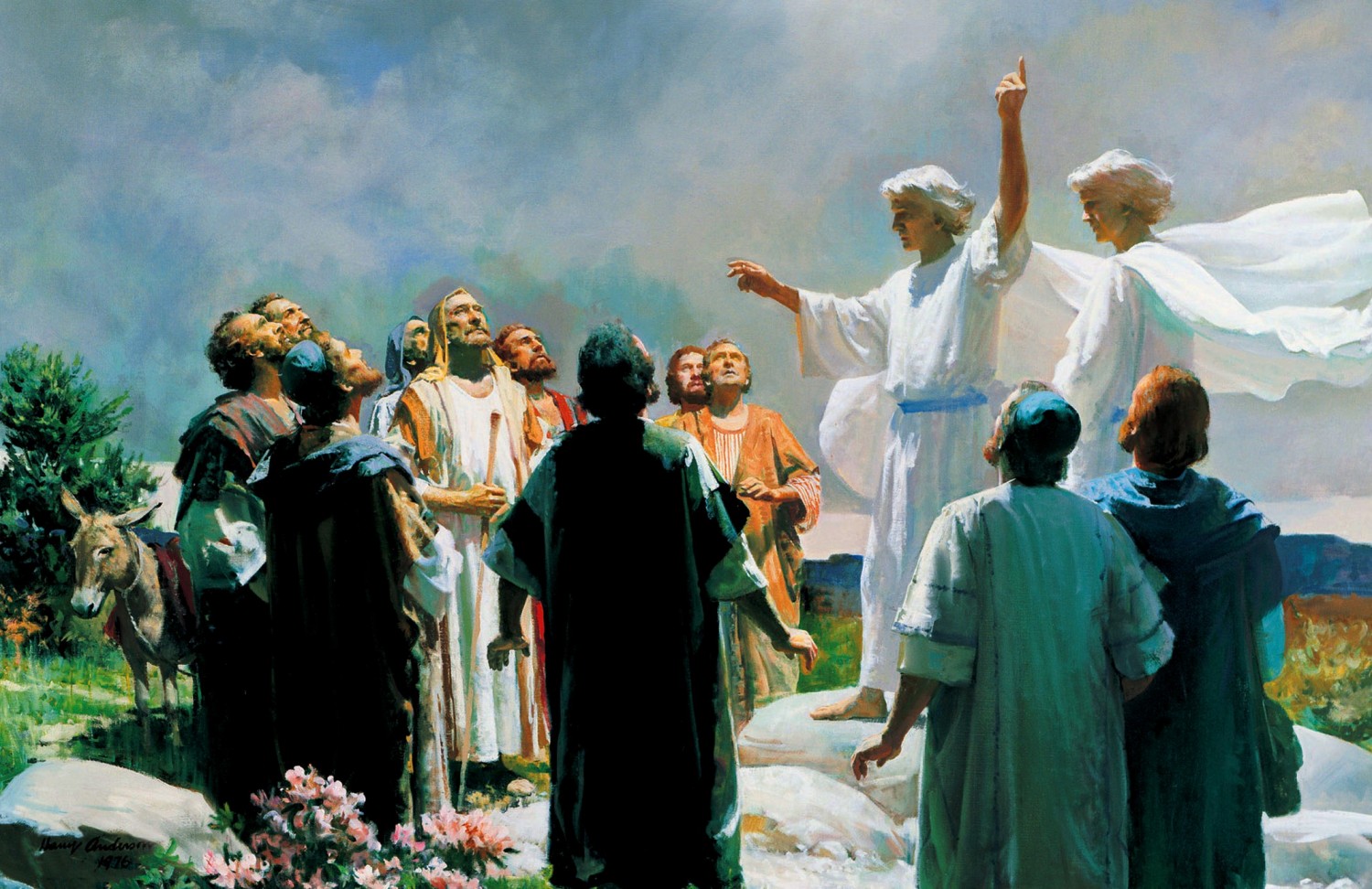 Then they returned to Jerusalem from the mount called Olivet, which is near Jerusalem, a Sabbath day's journey away. And when they had entered, they went up to the upper room, where they were staying, Peter and John and James and Andrew, Philip and Thomas, Bartholomew and Matthew, James the son of Alphaeus and Simon the Zealot and Judas the son of James. All these with one accord were devoting themselves to prayer, together with the women and Mary the mother of Jesus, and his brothers.

In those days Peter stood up among the brothers (the company of persons was in all about 120) and said, “Brothers, the Scripture had to be fulfilled, which the Holy Spirit spoke beforehand by the mouth of David concerning Judas, who became a guide to those who arrested Jesus. For he was numbered among us and was allotted his share in this ministry.” (Now this man acquired a field with the reward of his wickedness, and falling headlong he burst open in the middle and all his bowels gushed out. And it became known to all the inhabitants of Jerusalem, so that the field was called in their own language Akeldama, that is, Field of Blood.) “For it is written in the Book of Psalms,

“‘May his camp become desolate,

and let there be no one to dwell in it’;

“‘Let another take his office.’

So one of the men who have accompanied us during all the time that the Lord Jesus went in and out among us, beginning from the baptism of John until the day when he was taken up from us—one of these men must become with us a witness to his resurrection.” And they put forward two, Joseph called Barsabbas, who was also called Justus, and Matthias. And they prayed and said, “You, Lord, who know the hearts of all, show which one of these two you have chosen to take the place in this ministry and apostleship from which Judas turned aside to go to his own place.” And they cast lots for them, and the lot fell on Matthias, and he was numbered with the eleven apostles.

Grace peace and mercy to you from God our Father and from our Lord and Saviour Jesus Christ. Good Christian Friends. Early in the wee hours of the morning Peter had gotten up to go fish, like he and his brother Andrew had done the day before and the day before that, and the day before that, and as they cast out into the waters of the sea of Galilee the two of them had no idea that there would be a man on the beach later that day who would change their lives forever. Matthew the tax collector tells us how on that day, "while walking by the Sea of Galilee, [Jesus] saw [these] two brothers, Simon (who is called Peter) and Andrew his brother, casting a net into the sea, for they were fishermen. And [Jesus] said to them, “Follow me, and I will make you fishers of men.” Immediately they left their nets and followed Him. And going on from there [Jesus] saw two other brothers, James the son of Zebedee and John his brother, in the boat with Zebedee their father, mending their nets, and He called them. Immediately they left the boat and their father and followed [Jesus]."[1] Matthew who wrote that account down was also called. Matthew like Peter and Andrew and James and John had gotten up to go to his work, he cast a different net, his net brought in money and not fish, for Matthew was a tax collector and Matthew was casting his net as he had done day after day after day when "as Jesus [came by], [Jesus saw this] man called Matthew sitting at the tax booth, and [Jesus] said to him, “Follow me.” And [Matthew] rose and followed him."[2]

Who was missing? Who was missing that day as they witnessed Jesus ascend into heaven? Who, forty day after the resurrection of Jesus, was missing? Who didn't hear these words of comfort, this promise of the second coming the return of Christ Jesus? Judas Iscariot, he was missing and our first reading tells us how he was replaced. It tells us that he needed to be replaced not because he'd found some other occupation different from that of Apostle and disciple of Jesus, not because he'd gone into retirement or had simply not shown up for work that day out of laziness. No, Peter tells us that Judas Iscariot needed to be replaced because Judas had "acquired a field with the reward of his wickedness, and falling headlong he burst open in the middle and all his bowels gushed out." This is grizzly indeed, made more so when you factor in that Matthew tells us that after trying to return the money he'd been paid to betray Jesus Judas had departed from the Temple and hanged himself.[5] Judas had gone "to the chief priests and the elders, saying, “I have sinned by betraying innocent blood.” [and] They said [to him], “What is that to us? See to it yourself.”[6] They provided no hope of forgiveness, no forgiveness at all. And rather than wait for the Lord, as the Psalms so frequently advise, Judas took matters into his own hands and judged himself.

Judas was not the only one to betray Jesus that day, they had all run away in the Garden of Gethsemane (Even John who would later end up at the foot of the cross with the Virgin Mary Jesus' mother, even he had run away). And one of the twelve that Scripture speaks of as betraying Jesus that day is Peter. Peter who struck off the High Priest's servant's ear with a sword, when he was called to follow the Prince of Peace, Peter who denied Jesus three times when he was called to follow the Truth. Whether he was thinking of it or not Peter followed the advice of the Psalmist, he didn't judge himself in the end, he didn't "See to it [himself]," Peter rather waited for the Lord, and the Lord Jesus after His resurrection from the dead said to Peter "peace be with you." These words of forgiveness were for all of the remaining disciples, these Apostles, and at the end of the Gospel of John Peter who had betrayed Jesus was personally reinstated and graciously Jesus said to him "follow Me," just as Jesus had said to Peter and his brother Andrew as they were casting a net into the sea, back in their fishing boat on the sea of Galilee.

In faith Peter and the rest of the eleven, in the company of around one hundred and twenty believers in Jesus, "put forward two [men], Joseph called Barsabbas, who was also called Justus, and Matthias. And they prayed and said, “You, Lord, who know the hearts of all, show which one of these two you have chosen to take the place in this ministry and apostleship from which Judas turned aside to go to his own place.” And they cast lots for them, and the lot fell on Matthias, and he was numbered with the eleven apostles." In faith they put these men forward, and as Peter had said they were chosen because they were men who had accompanied the eleven during all the time that they had been with the Lord Jesus beginning from the baptism of John (That is Jesus' Baptism, the baptism of our Lord) until the day when Jesus was taken up from them at the Ascension, Peter said, "one of these men must become with us a witness to [Jesus'] resurrection.”[9]

Today in our epistle lesson we heard from 1 John, from a letter written by the Apostle John, one of the twelve. Back in the first chapter of that letter John echoes this same idea when he writes, "That which was from the beginning, which we have heard, which we have seen with our eyes, which we looked upon and have touched with our hands, concerning the Word of Life—the Life was made manifest, and we have seen it, and testify to it and proclaim to you the eternal Life, which was with the Father and was made manifest to us—that which we have seen and heard we proclaim also to you, so that you too may have fellowship with us; and indeed our fellowship is with the Father and with His Son Jesus Christ. And we are writing these things so that our joy may be complete."[10] Because Matthias had been one who had been with Jesus from the beginning of His public ministry, who had been with Jesus and the twelve throughout those three years before Jesus' crucifixion and resurrection then Matthias could say this same thing with John. Matthias had heard Jesus, seen Jesus with his own eyes, touched Jesus both before and after the resurrection, Matthias was a witness to Christ Jesus who is the Word of Life. The Way, the Truth and the Life.

What can be learned from all of this?The Lord provides. When something tragic befalls His church Jesus provides, Jesus provides help in the midst of trouble. Judas' death was tragic and sad and troubling and yet in the midst of that tragedy Jesus our great and good Lord of the Church provided  Matthias. Matthias was a gift to the remaining eleven, a gift being prepared in advance of the giving of the gift, an underserved, unexpected, gracious gift given, in part, because Jesus had promises "the gates of hell shall not prevail against [His church]."[11]

We within Jesus' church are called to be faithful, to trust in the Lord, to follow His word and to rely on Him. What are we to be about? What is the work set before us?Matthew tells us what Jesus said at His Ascension, Jesus said to them, “All authority in heaven and on earth has been given to Me. Go therefore and make disciples of all nations, baptizing them in the name of the Father and of the Son and of the Holy Spirit, teaching them to observe all that I have commanded you. And behold, I am with you always, to the end of the age.”[12] Jesus is with us, "to the end of the age," in His Word, in His Supper (Holy Communion) and in this Baptism which He Himself likewise instituted and commanded, and we today baptize young Gabriel into Christ Jesus.

So we are to be about the business of baptizing, teaching and administering the sacraments. This is the work of the church and it is Jesus who still calls men into this work. Jesus who through His Word and Sacraments calls out "follow me," He calls out "follow me" to pastors and people, to those who do the things He has commanded and to those who support the work being done, and when we all take a step back and look at the work Jesus calls His church to do, we see that we are all in it together and this work is accomplished within our fellowship and cooperating with each other in Christ Jesus - Should the church fall in one place He will raise it up and sustain it somewhere else. Apart from Jesus we have nothing. With Christ Jesus we have everything. In Jesus remember the Lord provides in season and out, in trouble (whatever it may be) and in plenty (however much it might be). Trust in Him even if the world hates you, even if trouble comes to you. As Psalm 27 says, "Wait for the LORD; be strong, and let your heart take courage; wait for the LORD!"[13] Amen.